Schwannoma is a tumor originating from the Schwann cells. Gastrointestinal schwannomas are uncommon stromal tumors of the intestinal tract and, in particular, rectal schwannomas are extremely rare. In fact, it is well established that schwannomas appear more frequently in the stomach and in the small intestine, while location in the colon or in the rectum is uncommon. Reading the literature, only few cases of rectal schwannoma have been reported. Their diagnosis is confirmed by the immunohistochemical panel (S-100 protein). When these tumors are located in the colon and in the rectum, radical excision with wide margins is mandatory, due to their tendency to recur locally or become malignant, if left untreated. In the present study, we describe a case of a rectal schwannoma occured in a 72-year-old man, presented as a small polypoid lesion, which was successfully removed in toto by hot-biopsy, during the same endoscopy, due to the dimensons. No recurrence of the lesion was observed after 6 mo of follow-up.

Core tip: Schwannomas of the colon and rectum are tumors that are rarely detected. For achieving a definitive histopathological diagnosis, the use of an appropriate immunohistochemical panel is request. Although schwannomas are considered to be benign tumors, their risks of recurrence must be not ignored. The best therapeutic option is complete surgical removal. In the present study, we describe a case of a rectal schwannoma occured in a 72-year-old man, presented as a small sessile polypoid lesion, which was successfully removed in toto by hot-biopsy, during the same procedure. No recurrence of the lesion was observed after 6 mo of follow-up.

Schwannomas are rare tumors derived from the cells of Schwann that form the neuronal sheath. Generally these are benign tumors, which, if left untreated, have the tendency to recur locally and become malignant[1,2]. These lesions are classified in gastrointestinal autonomic nerve tumours (GANTs) and were described for the first time by Herrera et al[3] in 1984. There are many synonyms for neurogenic tumors of the gastrointestinal tract, such as schwannoma, neurinoma, neurofibroma, neurogenic fibroma, neurilemoma and plexiform neurofibromatosis. Usually, this different names are used with the intent of relating them to the structure from which they originate[4]. The correct name of gastrointestinal schwannoma is based on the evidence showing that this neoplasm originate from Schwann cells in the neurons of the myenteric plexus[5,6].

Although rare, schwannomas must be included in the differential diagnosis from other intestinal mesenchymal neoplasms, such as smooth muscle tumors, neurofibromas, and gastrointestinal stromal tumors (GISTs)[7]. Primary schwannoma of the colon and rectum, not associated with systemic neurofibromatosis (von Recklinghausen disease), are extremely rare[8].

A 72-year-old man was referred to our unit for performing a colonoscopy due to abdominal pain. The medical history of the patient included a type 2 diabetes mellitus and arterial hypertension. The therapy was assumed at the moment for these diseases. There was no family history of inflammatory bowel disease or cancer and no previous abdominal surgery. Physical examination of the patient revealed good general condition. Laboratory test were normal. A colonoscopy disclosed evidence of a small sessile polypoid lesion, of about 1.5 cm in diameter, in the left lateral wall of the rectum, approximately at 1 cm from the superior anal margin. No other lesions were found in the other colon segments, including the cecum, except for a diverticular disease of the sigmoid colon. This lesion was removed in toto by hot-biopsy (Figure 1). The related histopathological findings showed typical features of shwannoma, with antoni A/verocay bodies (cells forming a typical palisade arrangement in a well-organised pattern) and Antoni B (small lacunar foci with loss of palisade architecture; Figure 2A) and strong positivity for S-100 protein at immunohistochemical assay (Figure 2B). After 6 mo, a follow-up colonoscopy, performed with methylene blue staining, disclosed no evidence of recurrence of the lesion. 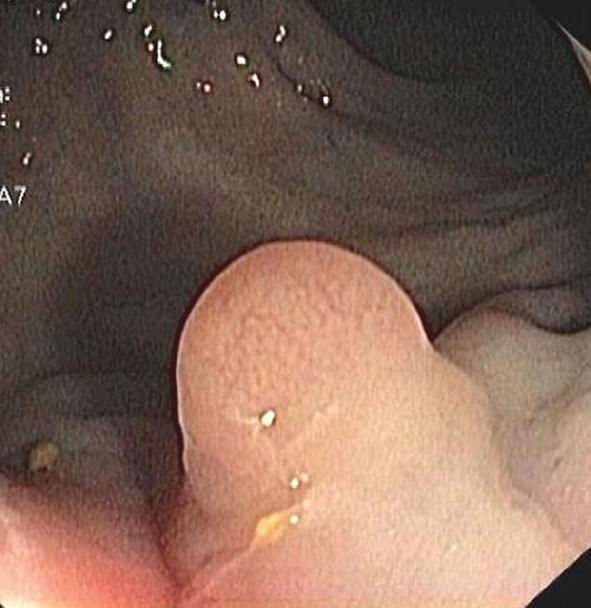 Figure 1 In case of a rectal schwannoma, the colonoscopy disclosed evidence of a little polypoid lesion in the left lateral wall of the rectum. 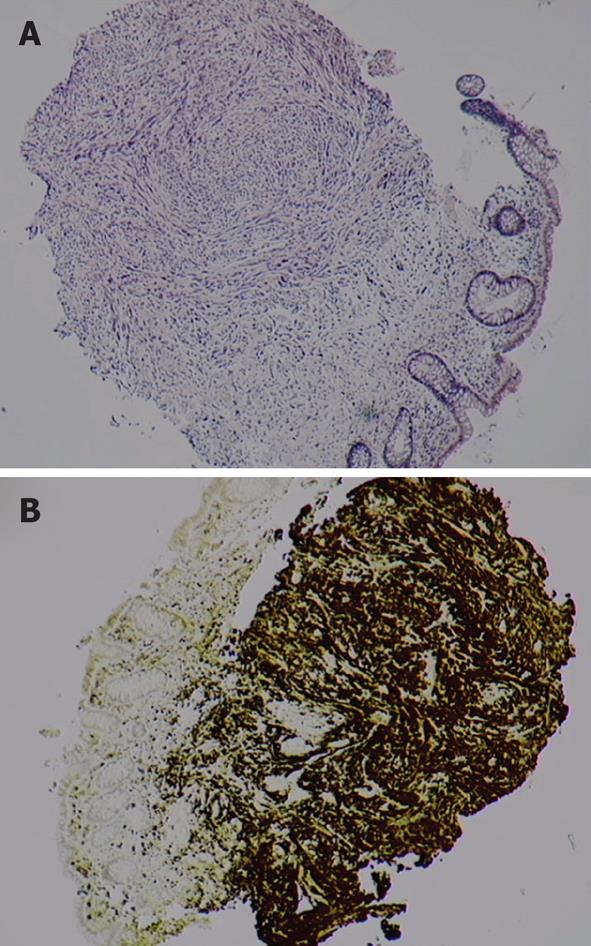 Figure 2 In case of rectal schwannoma, the tumor, located in the submucosa, has a nodular well-defined structure (haematoxylin and eosin, ×20). The structure that consists in proliferation of Schwann-like cells, showing a palisading arrangement (A), being marked by S-100 protein (B).
DISCUSSION

GANTs are uncommon stromal tumours accounting for 0.1% of benign tumours of the gastrointestinal tract[5]. The most frequent site for GANTs include the stomach followed by duodenum, jejunum, ileum[9], rarely they are located in the colon, and in the literature we have found only few reported cases of rectal schwannomas[2,6,9-16]. Moreover, Gibson et al[17] have studied 26 colorectal sessile polyps containing S-100 positive neural proliferations in the lamina propria, not associated with type 1 neurofibromatosis (NF1). The authors proposed to define them as “mucosal Schwann cell hamartoma”, to avoid confusion with the neural lesions that have significant associations with inherited syndromes. In particular, schwannoma has the same incidence in men and women with a mean age of 60-65 years[18]. Their size may vary and a case of a rectal schwannoma of about 12 cm has been reported[11]. Schwannomas are mostly asymptomatic or can present non-specific symptoms such as pain, fatigue and fever. Sometimes, rectal bleeding and signs of colonic obstruction may occur[18].

Schwannomas should be differentiated from other intestinal mesenchymal neoplasms. In fact, the most accurate diagnosis is based on immunohistochemical test[6]. Especially, it is difficult to distinguish schwannoma from leiomyoma and GIST. Generally, gastrointestinal schwannomas are not encapsulated, and this finding may help to distinguishes them from schwannomas in peripheral nervous system. On histopathological examination these kind of tumors have a lymphoid cuff with germinal centre. They may resemble GISTs but the presence of lymphoid cuff helped in diagnosing of schwannomas. The tumor cells of schwannoma are positive for S-100 protein, as in our case, and negative for smooth muscle markers, such as actin and desmin, which are positive in myogenic tumors. Although these are considered as benign tumors, the risks of recurrence of local and of distant metastases are 30% and 2%, respectively[19,20]. The mainstay management of these tumors is based prevalent on surgery with radical excision.

In conclusion, rectal schwannoma is a rare tumor with a benign behaviour and a good prognosis.