Nicolau syndrome (NS) is a rare cutaneous adverse reaction after intra-muscular or intra-articular injection. Clinical features of NS are presented by three typical phases (initial, acute and necrotic phases). The cause of NS is acute vasospasm, inflammation of arteries and thromboembolic occlusion of arteriole related various drugs. Many results of laboratory test, imaging studies and histopathology are reported and are associated with disease status. Three phase treatment is recommended for the patients with NS. Initially pain control and rule out differential diagnosis and in acute phase steroid therapy, heparin and pentoxifylline are useful. In necrotic phase, surgical treatment is needed depending on size of the affected site. NS is not well understood so far, however three phase treatment could lead to good result on basis of literature review.

Core tip: To our knowledge, there is no literature review of nicolau syndrome (NS) and we report this review article for understanding NS.

Nicolau syndrome (NS) (Embolia Cutis Medicamentosa or Livedoid dermatitis) is an uncommon cutaneous adverse reaction after intra-muscular or intra-articular injection of various drugs. NS was first reported in 1925 after the muscular injection of bismuth for the syphilis in the gluteal area[1,2]. The usual characteristics of the injected lesion are pain immediately after injection, subsequently erythematous lesion, livedoid and hemorrhagic patch, and NS leads to necrosis of skin, adipose and muscle layers. The syndrome has been related to the injection of various drugs, including non-steroidal anti-inflammatory drugs (NSAIDs), etancercpt, pethidine, antibacterial agents, chlorpheniramine maleate, corticosteroids, vitamin, sulphonamide, lidocaine, phenobarbital, chlorpromazine, thiocolchicoside and vaccines. To our knowledge, there were no literature review of NS and we report this review article for understanding NS.

The expansion of the search for this review was conducting during the last week of August 2014 using the MEDLINE (December 1966 to August 2014). The following medical terms were searched: “Nicolau syndrome”, “Embolia Cutis Medicamentosa”, “Embolic Cutis Medicamentosa”, and “Livedoid dermatitis”. Results were limited to human subjects, written in English (except one which is first described report by France), and published in peer-reviewed journals. There is one review article that is limited to children cases[3]. And 80 cases less than 12 years old was reported in Italian[4].

Initial phase of NS is presented by intense pain immediately or soon after the injection with a bluish discoloration[5]. Some patient complaints radiating pain to affected extremity or neurologic symptom such as peroneal neuropathy[6-9]. Faintness or syncope may occur[10]. Pain at the injection site is first sign subsequently erythema or hemorrhagic lesion and cutaneous necrosis or soft tissue and of the muscle develop eventually.

Acute phase occurs 24 h to 3 d later. In this phase, erythematous lesion develop at the injection site[11] or indurated painful livedoid plaque with the border of the violaceous and reticular plaque[12] develop. That is non-necrotic plaque or patch.

Necrotic phase as a final stage reveals that the injection site progress to violaceous, necrotic, crusted, indurated plaque. The lesion is progressing to erythema, swelling and tender induration with central necrosis. Finally necrotic phase comes 5 d to 2 wk. A painful indurated erythematous plaque with black necrosis[11,13] or a large necrotic skin patch with ulceration over the injection site is observed[6] (Figure 1). 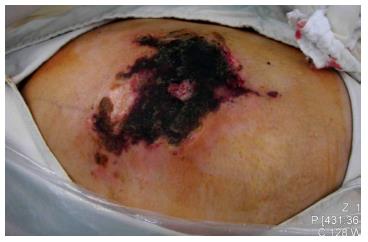 The most common sites are the buttocks however NS also has been reported on the shoulder[10], thigh[14-19], knee, ankle, breast[20] and abdomen[21,22]. In some complicated cases, critical complications such as extensive skin necrosis, transient or persisting ischemic changes of the ipsilateral limb and several neurological deficit may occur.

Pathogenesis of NS is not clear but a vascular origin is the most reasonable hypothesis. Acute vasospasm, inflammation of arteries and thromboembolic occlusion of arteriole are the key mechanisms[12]. The leakage of around artery and neural space has been suggested as cause of intense pain. Moreover, sympathetic nerve stimulation and vasospasm lead to ischemic change and skin necrosis. Unintended intravascular injection of drugs also has been proposed as causing inflammation or thromboembolic occlusion of the arterioles. These may cause arterial intimal necrosis, destructure the arterial membrane and induced subsequently cutaneous necrosis[12,23]. Few patients with NS after intramuscular injection of diclofenac have been reported even though which is a commonly used NSAIDs. Diclofenac as a cyclo-oxygenase inhibitor inhibits prostaglandin synthesis and causes vasoconstriction. Therefore, a vasospastic effect of diclofenac is the suggested pathogenetic mechanism of NS[24].

Ultrasonography do not identify any definite abscess or sign of fluid collection[19,25] but shows an evidence of an area of diffuse edema within the muscles[2]. Necrotic lesion reveals a diffuse hyperechogenic area with inflammation involving the subcutaneous area and the muscles[11].

Computed tomography reveals a well-defined lesion of the diffuse adipose inflammation with central gas collection[25,37] However the muscle tissue is uninvolved and there is no liquid collection[24]. Extension of involved lesion is usually limited out of the muscular fascia[13,37].

Magnetic resonance imaging reveals a subcutaneous liquid collection up to the fascia and muscle tissue appears uninvolved[11] or only diffuse change of signal intensity in the adipose layer at the injection site showing extensive edema in the subcutaneous fat[36] in acute phase. Progressing to necrotic phase, MRI reveals focal muscle necrosis and the residual muscle edema[36] however the muscle is spared and there is no liquid collected under the eschar tissue in some case[38].

Histopathologic findings are mainly reported in necrotic phase because surgical debridement is performed in this phase. Histopathology revealed fibrosis of adipose tissue, fat necrosis and predominantly eosinophilic infiltration[25] and inflammation infiltrating subcutaneous adipose tissue without any vasculitis or granuloma[5]. There is no evidence of malignancy or vasculitis[6].

Initial differential diagnosis includes a local toxic reaction to drugs, acute bleeding and acute compartment syndrome[16,36]. Especially shoulder region is differentiated from cardiac problem checking an ECG, cardiac enzyme levels, and a chest radiograph[10]. Also the differential diagnosis includes vasculitis, fat embolism, left atrial myxomas and Hoigne syndrome[12]. Patients would be admitted for presumed cellulitis[12,16,25]. Misdiagnosis of cellulitis lead to use antibiotics and it can be failure of treatment for NS[12]. Suspicious malignancy has to be checked by surgical extirpation of the plaque of the lesion and biopsy for macroscopic examination[20].

There is no consensus of treatment of NS so far. However we suggest the treatment of NS step by step as the three phases (Table 1). Phasic treatments depend on the extent of the necrotic lesion and ranges from medication to surgical debridement.

Initial phase: Because of severe pain, conservative pain control with analgesics and dressings is usually recommended. And differential diagnosis is most important in the initial phase. Ice pack application increases the acute focal vasospasm and can aggravate the disaster[10,40]. Until cellulitis of affected site is ruled out, systemic antibiotics are suggested. After any signs of cellulitis ruled out such as fever, elevated white blood cell count, C-reactive protein and erythrocyte sedimentation rate, prophylactic antibiotics might be useful.

Acute phase: Hypothesis of vascular origin and inflammatory sequelae is most reasonable. For this reason systemic steroid and anticoagulant agent are usually used[12,36]. Hyperbaric oxygen treatment was given to patient with the assumption of microarterial thrombi as well as heparin and pentoxyphilline[23]. Subcutaneous injection of heparin 5000 to 10000 U b.i.d.[12] and intravenous infusion of betamethasone diphosphate 24 mg/d induce improving symptom within 2 d[12]. Patient responses rapidly to methylprednisolone 1g IV q.d. or dexamethasone 32 mg intravenous injection for three days and pentoxifylline 400 mg PO t.i.d.[12]. Warm intermittent compression[12] is also recommended.

Necrotic phase: The patients with NS undergo surgical debridement of the affected skin, subcutaneous tissue and muscle in case of clinical and radiographic evidence of tissue necrosis[2,6,13,16]. And after the ulcerative necrotic lesion was filled with healthy granulation, split-thickness skin graft or reconstructive surgery were performed. Finally the wound healed well and uneventfully with atrophic skin scar or wound contraction[30].

If the patient is necessary to maintain following drugs, continuation of treatment with glatiramer acetate at other injection sites is recommended[22,33]. Also further injection of etanercept at other site is tolerated without complication[21].

Confirmation to extra-vascular leakage of the drugs is necessary to perform injection after having aspirated with the syringe[2]. And upper outer quadrant of the buttock area is the recommendable site for the intramuscular injection, which has fewer vessels[41].

Clinical differentiation alone is difficult to make a diagnosis of NS and the imaging and laboratory tests assist in the clinical decision[36]. By this literature review, three phase treatment is recommended for NS.