Thirteen of 14 stress fractures were linear, and one of them stellated on MRI images. The location of fractures was classified into three types. Three fractures were located anteromedially (AM type), six posteromedially (PM type), and five posteriorly (P type) at the medial tibial plateau. In addition, tibial posterior slope at the medial tibial plateau tended to be larger when the fracture was located more posteriorly on MRI.

Stress fractures of the lower extremity commonly occur in athletes and military personnel. The tibial shaft is the most common location for stress fractures during running and marching activities, whereas the medial tibial plateau is a relatively uncommon site. Engber et al[1] reported a series of 36 patients (57 fractures) including 21 bilateral in 1977. Harolds[2] also reported 105 fractures in 71 soldiers in 1981. They documented that this fracture type is difficult to detect on initial roentgenograms at the onset of symptoms. This injury is easily misdiagnosed because the location of pain and tenderness is very similar to the meniscal injury and pes anserinus bursitis, which are common problems in running activities.

The study protocol was approved by the institutional review board, and the requirement for informed consent was waived. For the present study, we searched the key words “tibial plateau” and “stress fracture” using a database of our institutes’ medical records between April 2010 and March 2015, and identified 22 patients. The authors reviewed all medical records. No fractures were observed on MRI in 3 patients, and MRI was not taken in 4 other patients. We excluded these 7 patients in the present study. In addition, one patient was excluded because of a fracture of the medial tibial plateau for which a traumatic event of the affected knee could be identified. Finally, we selected a total of 14 patients [eleven men and three women; mean age, 36.4 years (range, 15-50 years)] with eight right and six left medial tibial plateau stress fractures (Table 1). All patients did not have any relevant medical co-morbidities, such as rheumatoid arthritis, metabolic disease, or osteoporosis in the medical record review, although we did not evaluate bone mineral density (BMD) in the present patients.

The main complaint of all patients was pain in the medial aspect of the proximal part of the tibia, without any traumatic events. On physical examination, tenderness was consistent with the pain site. All cases had no limitation of knee range of motion for reasons other than pain. We did not identify an apparent joint effusion in any patients. All cases did not report sudden onset of discomfort. Thirteen cases were associated with long-distance running (jog or marathon), and one case was associated with rope jump. The delay between symptom onset and seeking medical service ranged from 0 to 120 d (average, 21.9 d).

Initial anterior-posterior and lateral plain radiographs of the affected knee were taken within 2 wk of onset of symptoms (average, 7.9 d) in 12 of 14 patients. No fracture lines on X-rays were observed in these patients.

MRI scans were completed in all 14 patients. MRI of the knee was performed with a 1.5-T MRI scanner (EXCELART Vantage, TOSHIBA, Japan) using a knee coil. Proton density (PD) weighted MRI (TR/TE, 3750/18) and T2-weighted MRI scans (4100/90) sequences were performed in coronal, sagittal, and axial planes according to our routine knee MRI protocol. MRI parameters for all sequences were as follows: FOV, 16-16 cm; 1 excitation; matrix size, 256 × 368; section thickness, 3 mm for coronal, sagittal, and axial planes; and intersection gap, 1 mm. MRI revealed a linear or stellate PD and T2-low weighted image at the medial tibial plateau in all 14 cases (Figure 1). We did not identify any other associated findings on the MRI scans like osteoarthritis, ligament or meniscal pathology, or articular cartilage lesions. 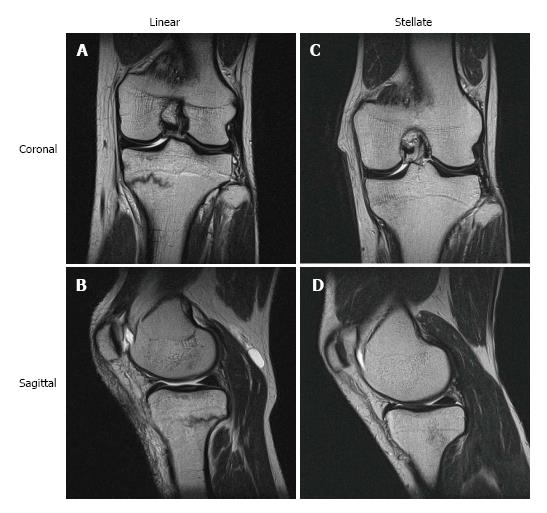 Figure 1 Representative magnetic resonance imaging images of T2-weighted coronal and sagittal views of linear type (A and B) and stellate type (C and D) in stress fractures of the medial tibial plateau.
Classification and measurements on MRI

In addition, to investigate the relationship between the fracture location and the geometry of the medial tibial plateau, we measured the posterior tibial slope and medial tibial slope at the medial tibial plateau on the sagittal and coronal planes of T2-weighted images using ImageJ software according to the measurement reported by Hashemi et al[8]. Briefly, the transverse image passing through the tibiofemoral joint was used to identify the coronal plane that passed closest to the centroid of the tibial plateau and the sagittal plane that included both anterior and posterior cruciate ligaments. The longitudinal axis of the tibia in the coronal and sagittal planes was defined by determining the midpoint of the medial-to-lateral and anterior-to-posterior widths of the tibia at two points located approximately 3 cm apart and as distally in the image as possible (Figure 2). The medial slope in the coronal plane and the sagittal slope of the medial tibial plateau in the sagittal plane were then measured as the angle between a line joining the peak points on the medial-to-lateral, and the anterior-to-posterior aspects of the plateau and the longitudinal axis. The measured value was rounded off to the first decimal place. Two orthopaedic surgeons (KY and YU) separately measured both tibial posterior and medial slope of fourteen MRIs in a blind manner. Two investigators evaluated the parameters twice with a 1-wk interval. To test intra- and inter-observer reliability, the intraclass correlation coefficient (ICC) was calculated for two assessors. 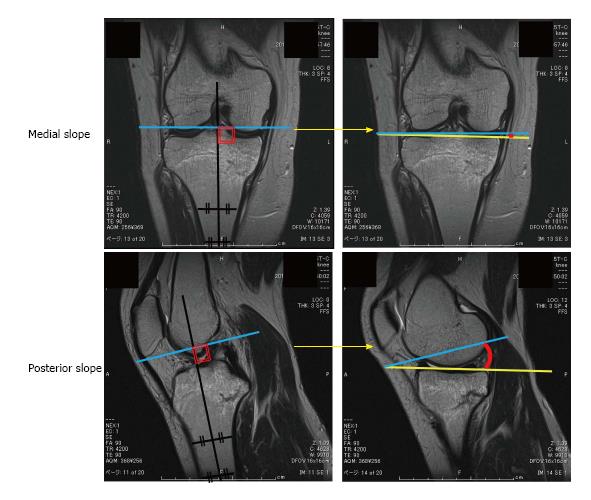 All statistical analyses were performed with R2.8.1. Intra-interobserver agreement was assessed by ICC. The data was analyzed by Kruskal-Wallis and post-hoc Mann Whitney with Holm’s correction for determination of differences between three groups, and presented as the mean ± SE. P value < 0.05 was considered statistically significant. 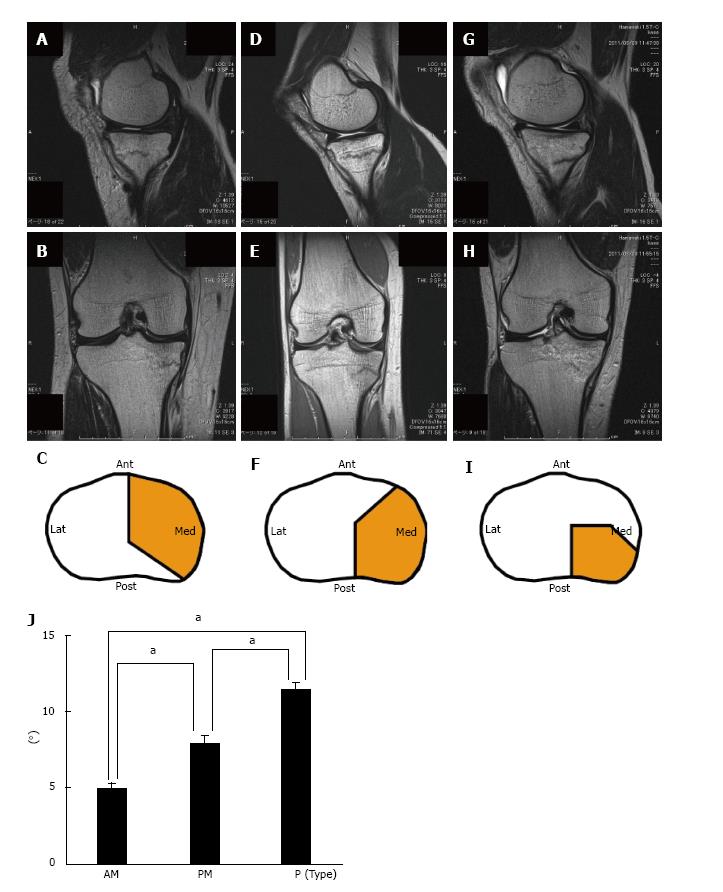 Dynamic contact mechanics of the tibial plateau during running have not been elucidated, but cadaver studies have described the pressure distribution pattern of the knee during a simulated gait[9,10]. Bedi et al[9] demonstrated that the posterior portion of the plateau had higher peak contact pressures than the anterior portion in the stance phase of gait at 14% of the gait cycle, which correspond to 15° knee flexion with axial loads of 2280N. Wang et al[10] also reported that one of the most prominent contact stress patterns was observed at the posterior aspect of the medial tibial plateau in nine of 12 cadaveric knees with a single peak stress that occurred at 14%-18% of the gait cycle during the early stance phase. These results are consistent with the fact that more frequent location of medial tibial plateau stress fractures is posterior, although tibial posterior slope was not taken into consideration in their studies.

This fracture type most frequently occurs in soldiers and marathon runners[1,2]. In our series, thirteen of 14 cases were recreational runners. Running has positive effects on physical fitness including reduction in the incidence of obesity, cardiovascular disease, and the other chronic health problems. On the other hand, more people may sustain a running-related injury of the lower extremity. Physicians should be aware of a stress fracture at the medial tibial plateau when patients, particularly runners, present with medial knee pain. Tibial plateau stress fractures in athletes or soldiers are usually self-limiting disease without any persistent deformities because they are comparatively young and they do not have osteoporosis. In fact, all of the present cases did not have any changes of tibial plateau morphology in the follow-up X-rays. On the other hand, insufficiency fractures of the tibial plateau caused by osteoporosis, steroid-use, and rheumatoid arthritis occur in elderly patients[17,18]. We believe that BMD should be evaluated for older runners because delayed diagnosis and treatment can lead to deformity of the knee if osteoporosis is more severe.

One of the limitations of the present study is a small number of the patients because of its rarity. The second limitation is an insufficient length of the tibia on MRI because we used the knee MRI to measure the tibial and medial slopes, which includes only proximal one-third of the whole tibia. MR images of whole tibia might result in more precise slope measurements.

In conclusion, we found three distinct location types of isolated stress fractures of the medial tibial plateau based on MRI. MRI is the preferred technique to correctly diagnose these fracture types because X-rays might not detect the fracture for two week after the onset. Other modalities, such as ultrasound or CT, may be considered as alternatives to diagnose to tibial plateau stress fractures[4]. At that time, tibial posterior slope could serve as an indicator to find out the fracture location at the medial tibial plateau.

We are grateful to Dr. Abdelhakim Ezzat Montasser Marie, Department of Orthopedic surgery, Ogori Daiichi General Hospital, for his critical review of the manuscript.

Stress fractures of the lower extremity commonly occur in athletes and military personnel. The tibial shaft is the most common location for stress fractures during running and marching activities, whereas the medial tibial plateau is a relatively uncommon site. This fracture type is difficult to detect on initial roentgenograms at the onset of symptoms. This injury is easily misdiagnosed because the location of pain and tenderness is very similar to the meniscal injury and pes anserinus bursitis, which are common problems in running activities.

Bone scintigraphy, computed tomography (CT), and magnetic resonance imaging (MRI) are widely used for early detection of stress fractures. Among them, MRI has been found to be more sensitive than CT and more specific than scintigraphy. T2- and STIR-MR images are useful for detecting edema of the cancellous bone that usually presents as a linear fracture line at the medial tibial plateau. No studies have investigated more detailed MRI features of medial tibial plateau stress fractures.

It is a very interesting study. The authors present a series of patients with imaging regarding stress fractures of the tibial plateau.