Citation of this article
Emara KM, Mahmoud AN, Emara AK, Emara MK. Effect of lengthening along the anatomical axis of the femur and its clinical impact. World J Orthop 2017; 8(5): 431-435

To review and study the effect of lengthening along the anatomical axis of long bones and its relation to the mechanical axis deviation.

Lengthening along the anatomical axis of the femur by 10% of its original length results in reduction in the distal femoral AMA by 0.57 degrees. There is no objective experimental scientific data to prove that the Mechanical axis is passing via the center of the hip to the center of the knee. There is wide variation in normal anatomical axis for different populations. In deformity correction, surgeons try to reproduce the normal usual bone shape to regain normal function, which is mainly anatomical axis.

Lengthening of the femur along its anatomical axis results in mild reduction of the distal femoral AMA. This may partially compensate for the expected mechanical axis lateralisation and hence justify its minimal clinical impact.

Core tip: In deformity correction the aim is to reproduce the normal anatomical shape of the bone to regain normal function. There is no experimental data to prove the passage of the imaginary mechanical axis and load distribution of the body via the center of the hip to the center of the knee. Lengthening along anatomical axis of the bone is expected to cause minimal or no clinical effect on mechanical axis and load distribution on joints.

Trigonometry was used to calculate the change in the angle between the femoral mechanical and anatomical axes resulting from lengthening along the anatomical axis. The original angle is assumed to be 7°, where “θ” is the angle after lengthening the femur a distance of “x” cm (Figure 1). 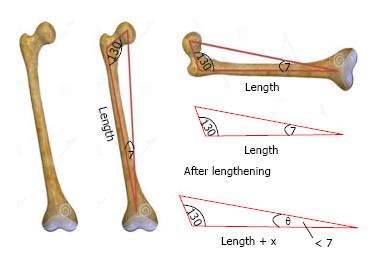 The angle θ was calculated for different original bone lengths and different lengthening distances. Original bone lengths used in our calculations are average lengths that vary from 21 cm for a 3 years old, up to 44 cm for an adult female and 47 cm for an adult male[6]. Femur lengths were considered for different ages with a step of 3 years of age, and so 3, 6, 9, 12, 15 years old, adults’ femurs were considered. Lengthening distances that were considered to vary from 3 to 18 cm, adding 3 cm each step (3, 6, 9, 12, 15, and 18) (Figure 2).

Figure 2 Calculation of the changes in the θ angle after lengthening of different sizes of femora using Law of Sines (A-F).
RESULTS

Results of the change of the femoral AMA after lengthening were expressed in Table 1. From the calculations, it was deduced that increasing the bone length by 10% its original length results in reduction of the angle between the mechanical and anatomic axes by 0.57°, and increasing the length by 20% reduces the angle by 1.05° approximately.

Our hypothesis was that the femoral lengthening along the anatomical axis with a telescopic intramedullary nail induces reduction of the femoral anatomical mechanical angle (AMA) which is normally around 7°. This may compensate for the limb mechanical axis that lateralization that was proven both theoretically and radiologically[2-4,6], and hence could partially justify the minimal clinical impact of such mechanical angle lateralization after intramedullary lengthening.

On the other hand, all the studies which found a radiological mechanical axis deviation after femoral lengthening with intramedullary nails did not comment on the isolated femoral axes relation changes, which in our case represented by the distal femoral AMA. Clinically, all these studies have described that mechanical axis lateral shift to be inconsequent or clinically insignificant[2,5,7,9-12]. This might support our hypothesis, that such mechanical axis shift could be partially compensated by reduction in the distal femoral AMA concluded in our study, and hence no clinical consequences could be observed. Also this might be attributed due to the wide variation of the mechanical limb alignment in (normal) individuals. In the study of Ekhoff et al[13], only 2% of normal limbs included in the study have a neutral mechanical axis, and as many as 76% deviate from neutral by > 3° varus when measured using CT. Also, Bellemans et al[14] found that limb alignment differs between males and females as studied by using full-length lower limb radiographs. In this study, 32% of male and 17.2% female knees were in > 3° of constitutional varus. Similarly, Yaniv et al[15] found that varus knee axis deviation is normally present in football players older than 13 years old.

The mechanical axis is supposed to be the line of body weight loading the joints to the ground, and since the body centre of gravity could be affected greatly by postural abnormalities that may be present in different patients, marked differences in the limb mechanical axes could be seen in different individuals. The situation is further complicated by differences in the alignment of the limb when measured in a lying position (which is non-weight bearing) and in a weight-bearing standing position[16]. In a study by Deep et al[17], they found the limb alignment to be dynamic process that differs according to different postures, and also varies between males and females in normal knees. Deep et al[17] found also a greater tendency into varus malalignment in the study group with normal non-arthritic knees, that go into more varus when changing the position from supine to standing. Walcox et al[16] found similar changes in arthritic knees. Again, the presence of nutritional abnormalities in Calcium and vitamin D metabolism could lead high prevalence of mechanical axes varus malalignment in normally looking adolescents[18]. Again, in general population and different races, there is a range of varus and valgus deformation that has no clinical effect, and there is no fixed number for the normal anatomical shape of human bone. Some mild change during lengthening can stay in most of the cases within this range. The assumption of fixed normal passage of mechanical loading on the limb is not exactly compatible with reality due to the different positions the normal human body use along the day in normal life. Also there is no objective Empirical data to prove where is the normal passage of mechanical axis in relation to the human joints. Since the aim of deformity correction surgery is to reproduce the near normal anatomical shape of bones to improve function, anatomical axis should be the main guide for surgeons in deformity correction and limb reconstruction.

All these data, beside the fact that even the documented amount of mechanical axis lateralization, 1 mm for each 1 cm lengthening, remains very little, this may further justify that the actual implementation of the mechanical axis deviation on the clinical outcome could be very mild or even non significant.

Bone lengthening and deformity correction surgery consider the mechanical and anatomical axes during the surgical planning and treatment. This review article aim to stimulate critical thinking to some fixed ideas in the community of orthopaedic surgeons, specially pediatric orthopedics and limb reconstruction.

There are objective data about anatomical shape of bone and the range of normal variation but there is no sufficient data regarding the normal mechanical axis and its variation between normal population.

Lengthening along anatomical axis is safe and effective.

Anatomical and mechanical axis are terms used in deformity correction and bone lengthening.

The authors present a review article about the effects of lengthening along the anatomical axis, using a trigonometric approach. They refer to the topic of mechanical axis lateralisation in intramedullary limb lengthening and check the clinical relevance.