Research Domain of This Article
Rheumatology

The pathogenesis of rheumatoid arthritis (RA) remains to be completely elucidated so far; however, it is known that proinflammatory cytokines play a pivotal role in the induction of RA. Tumor necrosis factor (TNF-α), in particular, is considered to play a central role in bone destruction by mediating the abnormal activation of osteoclasts or the production of proteolytic enzymes through direct or indirect mechanisms. The use of TNF-α blocking agents has a significant impact on RA therapy. Anti-TNF-α blocking agents such as infliximab are very effective for treatment of RA, especially for the prevention of articular destruction. We have previously shown that several proteins exhibited extensive changes in their expression after amelioration of RA with infliximab treatment. Among the proteins, connective tissue growth factor (CTGF) has a significant role for the development of RA. Herein, we review the function of CTGF in the pathogenesis of RA and discuss the possibility of a novel treatment for RA. We propose that CTGF is a potentially novel effector molecule in the pathogenesis of RA. Blocking the CTGF pathways by biological agents may have great beneficial effect in patients with RA.

Rheumatoid arthritis (RA) causes chronic inflammation and consequently destruction of the articular tissue. Although the pathogenesis of RA are not fully understood, proinflammatory cytokines such as tumor necrosis factor (TNF)-α have been proposed as important factors in the pathogenesis of RA[1-4]. TNF-α is multiple functional cytokine. In addition to inflammatory process, TNF-α concerns various physiological phenomena in RA[5,6]. Moreover, accumulating reports suggest that TNF-α promotes bone destruction in RA, as excess TNF-α cause the abnormal osteoclaststic activation by direct or indirect interaction[2,3]. Our previous study used a novel approach of proteomic research and showed a significant profile change of serum protein biomarkers (approximately 20 proteins) in patients with RA treated using infliximab[1]. Among the proteins listed in our previous study, we found that connective tissue growth factor (CTGF) played an important role for the amelioration of RA[7-9] patients in infliximab treatment (Table 1). Based on this finding, we undertook subsequent studies to analyze the contribution of CTGF in the pathogenesis of RA and found that it plays an important role[8-10]. Herein, we review the function of CTGF in the pathogenesis of RA based on these findings. In RA, aberrant CTGF regulation may induce aberrant osteoclastogenesis and cause disturbance in cartilage homeostasis, subsequently resulting in articular tissue destruction. Blocking the CTGF pathways may be a novel effective strategy in the treatment of RA.

CTGF was originally identified in human umbilical endothelial cell supernatants that exhibit platelet-derivedgrowth factor (PDGF)-like chemotactic and mitogenic activities toward mesenchymal cells; the cDNA was isolated from a human vein endothelial cells (HUVECs) cDNA expression library using anti-PDGF and it encoded a 349-amino acid protein[11]. CTGF belongs to the CCN protein family and is believed to be a downstream molecule of transforming growth factor (TGF)-β pathway[12]. Although several candidate specific CTGF receptors have been currently proposed, they have not yet been completely identified to date. CTGF is associated with several biological functions such as fibrosis, tumorigenesis, angiogenesis, and endochondral ossification[13]. CTGF in articular tissue, consisting different types of cells, is produced by chondrocytes and maintains cartilage tissue homeostasis via the autocrine process. Furthermore, incomplete knock-down of the CTGF gene dramatically inhibits osteoclast-like cell formation in mice, even though the complete knock-down mice exhibit embryonic lethality[14].

CONTRIBUTION OF CTGF TO THE PROGRESSION OF RA

In vivo transfection with an adenovirus expression vector that encodes CTGF into mouse knee joints has been shown to cause cartilage damage due to an increase in mRNA coding for proteolytic enzymes such as matrix metalloproteinase (MMP)-3[15]. Manns et al[16] reported the up-regulation of CTGF in an experimental animal model of RA; treatment with a thrombospondin-1-derived peptide ameliorate the development of arthritis concomitant with the down-regulation of CTGF. These reports have indicated that CTGF has a significant role in the pathogenesis of RA. In addition, we observed the following interesting findings in our previous studies: (1) CTGF was overproduced by synovial fibroblasts in patients with RA (Figure 1); (2) the production of CTGF was regulated by TNF-α. CTGF production was up-regulated in synovial fibroblasts and down-regulated in chondrocytes (Figure 2); and (3) CTGF in combination with MCSF/RANKL promoted osteoclastogenesis (Figure 3)[8]. In the results of our study, we observed that TNF-α induced CTGF production by synovial cells. In contrast, TNF-α inhibited CTGF production by chondrocytes. TNF receptors have shown to transduce and amplify receptor activation resulting different cellular fates such as NF-κB activation or apoptosis. Although precise intracellular mechanisms has not elucidated, previous studies have indicated that TNF-α increased or inhibited CTGF production depend on cell types. For example, TNF-α positively regulated CTGF production in mesangial cells[17]. On the other hand, TNF-α negatively regulated CTGF production in human lung endothelial cells[18]. 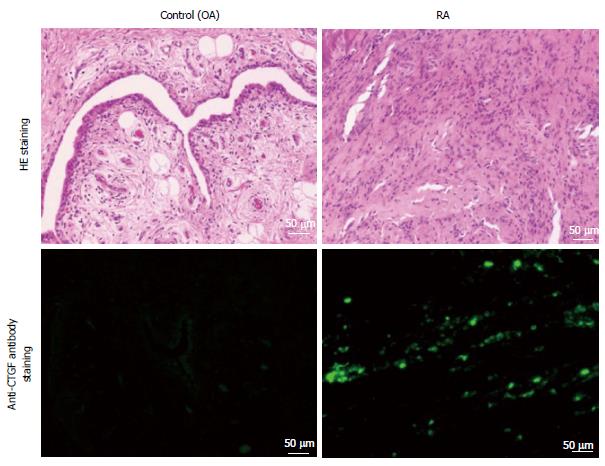 Figure 1 Connective tissue growth factor expression was increased at synovial tissue in rheumatoid arthritis. Representative results of hematoxylin and eosin (HE) staining, immunofluorescence anti-connective tissue growth factor (CTGF) antibody staining, and anti-F4/80 antibody staining are shown using surgical samples from patients with rheumatoid arthritis (RA) and osteoarthritis (OA). The observed CTGF expression was stronger in the samples of patients with RA than in the samples of patients with OA. 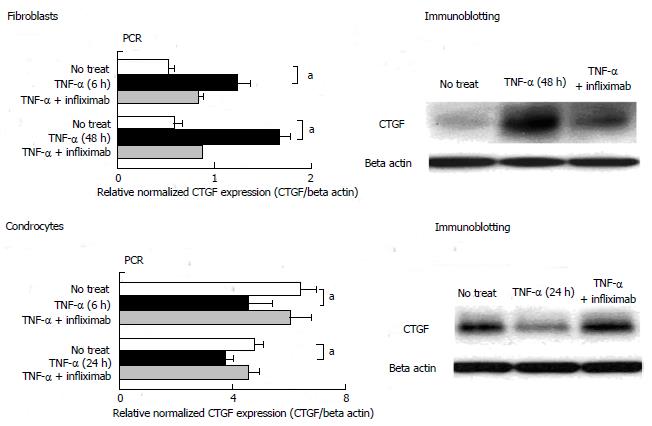 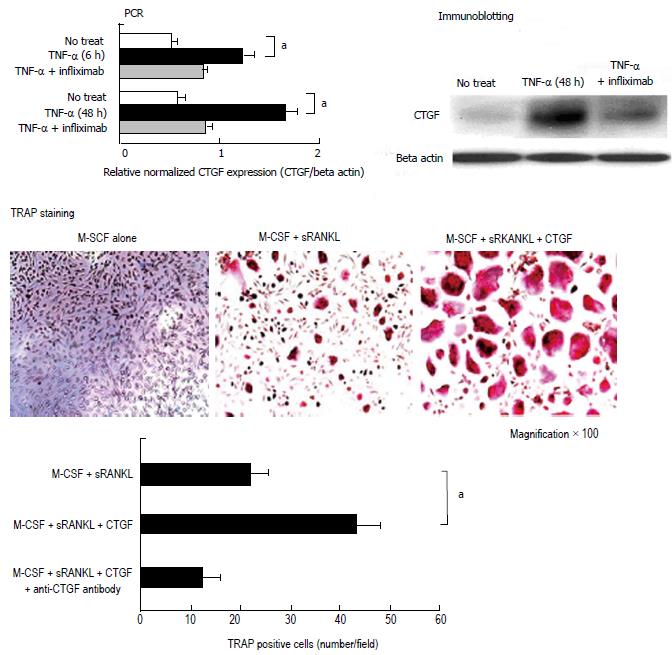 Figure 3 Connective tissue growth factor enhanced macrophage-colony stimulating factor/ receptor activator of nuclear factor kappa-B ligand mediated osteoclastgenesis. Figure 3 Shows images of tartrate-resistant acidic phosphatase (TRAP) staining and the number of TRAP positive cells. For the evaluation of osteoclastogenesis, CD14+ were purified from peripheral blood mononuclear cells of healthy volunteers to obtain osteoclastic progenitor cells. Osteoclasts were induced with macrophage-colony stimulating factor (M-CSF) and soluble receptor activator of nuclear factor kappa-B ligand (sRANKL) and the osteoclastgenesis was evaluated by TRAP staining. The TRAP positive cells were defined as osteoclasts. Connective tissue growth factor (CTGF) alone could not help in the differentiation of osteoclasts (data not shown). M-CSF/RANKL-mediated osteoclastogenesis was enhanced, which was detected by the production of CTGF by larger and higher number of osteoclasts; this enhancing effect was abolished by anti-CTGF antibody. The bars in Figure 2 indicate the standard deviation. Statistical analysis (paired t test) was performed, and P values < 0.05 were considered to be statistically significant. aP < 0.05, M-CSF + sRANKL + CTGF vs M-CSF + sRANKL.

Next, we performed an in vivo study to clarify the pathological roles of CTGF in the arthritis development using a murine collagen-induced arthritis (CIA) model. A DBA/1J mice were immunized with a combination of type II collagen and complete Freund adjuvant (CFA) for induction of CIA. We confirmed in vivo CTGF expression was increased at the articular tissue in CIA mice as well as human patients with RA (Figure 4). Moreover, we evaluated the efficacy of the neutralizing anti-CTGF monoclonal antibody (mAb) in the prevention of CIA development in mice. We found that the neutralizing anti-CTGF mAb significantly ameliorated CIA in the treated mice (Figure 5A). In addition, aberrant osteoclastogenesis observed in the mice with CIA was reduced by anti-CTGF mAb treatment (Figure 5B). Our consecutive studies showed that blocking the production of CTGF prevented the progression of RA. Therefore, CTGF may be a new therapeutic target for the treatment of RA. 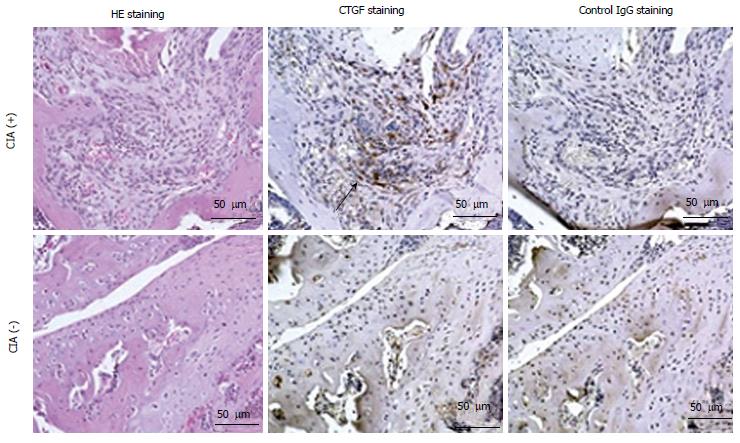 We confirmed that CTGF is a novel effecter molecule in the pathogenesis of RA. A schematic hypothesis of its role is presented in Figure 6. CTGF is a multiple functional cytokines and possess a several biological functions depend on the target cells. Although many candidate molecules on the cell surface have been suggested as specific CTGF receptors such as integrins, they have not been completely identified to date. Biological functions of CTGF may differ depend on its receptor as well as cell types. Although the mechanism of action and the importance of CTGF in contribution to the RA development are unclear, we showed that blocking the CTGF pathway could ameliorate CIA especially through the reduction of aberrant osteoclastogenesis. These data imply the possible mechanism underlying the efficacy of anti-CTGF antibody in the treatment with RA. Our study indicated that CTGF is important factor in the development of RA. These results may shed light on the new therapeutic strategies for RA. Further precise studies that will provide clues to assist in the development of new treatment for RA as well as a deeper understanding of its etiology are required. 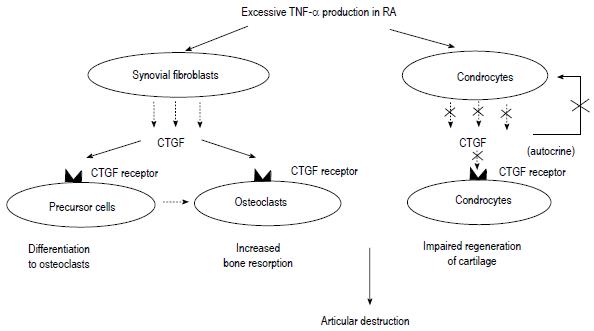