The patient was a 59 year old man whose major complaint was an uncomfortable feeling in the cervicothoracic back region and who had a history of surgery for the metastasis removal in the first thoracic vertebra. About 3 years earlier, he had experienced the sudden onset of difficulties with walking. His muscle strength of the lower extremities was manual muscle testing (MMT) 3+ and moderate paresthesia of his trunk and lower extremities was noticed. Magnetic resonance imaging (MRI) (Figure 1A and B) indicated compression of the spinal cord at the level of the first thoracic vertebra (Th1) by a lesion that was considered a metastasis of an unknown primary tumor; thus, the patient was subjected to an emergency operation. The surgical procedure included laminectomy of C7, Th1 and Th2 and fixation of C5-Th4 using a sublaminar wire and a rectangle rod (Figure 2A and B). No clear damage to the dura mater was observed intraoperatively.

Figure 1 Magnetic resonance imaging revealing compression of the spinal cord at the level of the first thoracic vertebra by a lesion that was considered a metastasis of an unknown primary tumor. A: T1-weighted image; B: T2-weighted image.

Figure 2 Radiography after first surgery. The laminectomy of C7, Th1 and Th2 and fixation of C5-Th4 were performed by using a sublaminar wire and a rectangle rod. A: Anteroposterior view; B: Oblique view.

Based on the pathological findings from tissue obtained intraoperatively, adenocarcinoma of the lung was diagnosed. Walking difficulties improved postoperatively, his muscle strength of the lower extremities was MMT 4 and moderate paresthesia of his trunk and lower extremities was improved. The patient then received chemotherapy in the Department of Respiratory Internal Medicine. The lung cancer was stage IV, cT4N0M1 according to the TNM classification system. Because this patient’s prognosis was very poor, only 5-FU (600 mg/d) for 6 mo was prescribed as his chemotherapy.

The MRI obtained 4 mo after the surgery showed a 7 cm × 3 cm mass that was hypointense on the T1-weighted image and hyperintense on the T2-weighted image, and a pseudomeningocele due to cerebrospinal fluid leak was detected. However, since the patient presented no symptoms attributable to the tumorous lesion, he was placed under observation. The lesion gradually grew to about 15 cm in diameter by 2 years postoperatively, as shown on MRI (Figure 3A, B and C). Since he felt uncomfortable, as if he were carrying a heavy weight on the cervicodorsal region, he was admitted for cerebrospinal fluid leak closure.

Findings on admission indicated a favorable general condition. He had no headache or nausea and could walk unaided. The operation was started following the skin incision from the previous surgery to remove the metastatic tumor. The subsequent subcutaneous deployment led to a 15 cm × 5 cm × 3 cm pseudomeningocele. The very thin capsule was broken (Figure 4) and about 50 mL of colorless clear fluid was released. No damage to the dura mater was noted. Even although it was not possible to detect small holes from which cerebrospinal fluid was leaking, fatty tissue was collected from under the skin and retained over the dura mater, over which fibrin paste was applied. We closed the paraspinal muscle and soft tissue in a layer-by-layer manner to reduce the third space as much as possible. Spinal drainage to reduce intradural pressure was then performed from the L3/4 level and adjustment was made to drain 200-300 mL/d of cerebrospinal fluid after the operation. 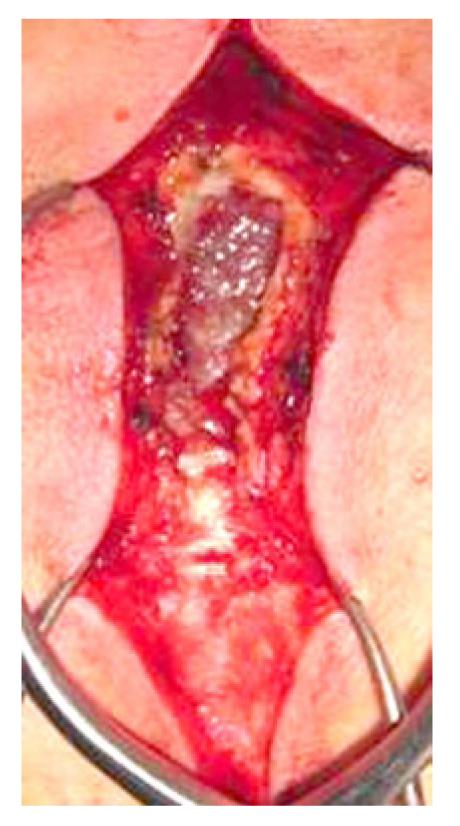 The postoperative course was favorable and his preoperative complaint of discomfort on the cervicodorsal region disappeared with no remarkable complications. The spinal drainage was withdrawn after about 2 wk postoperatively and the condition of the wound was confirmed to be favorable. According to the MRI (Figure 5A and B) obtained 3 mo after closure of the cerebrospinal fluid leak, the pseudomeningocele had disappeared and no recurrence has been observed for 2 years postoperatively. His muscle strength of the lower extremities was MMT 4 and slight paresthesia of his trunk and lower extremities was noticed at the follow-up 2 years after second operation. Chest and abdominal CT obtained at that time showed multiple metastases of ribs, vertebrae, pelvic bone and multiple enlarged lung lesions; however, the patient had almost no complaints.

The formation of a pseudocyst is a mechanical process. Lesion size depends on the size of the defect in the dura-arachnoid, the pressure of spinal fluid and presumably resistance from the surrounding soft tissues. If a small tear in the dura and intradural pressure causes a constant outflow of spinal fluid, the lesion will also gradually enlarge. The intradural pressure is higher in the lumbar spine than in the cervical spine; this potentially explains why pseudomeningoceles occur more often at the lumbar level. A giant pseudomeningocele can develop in patients with a large dural defect or high intradural pressure[7].

Diagnosis of pseudomeningocele typically depends on MRI which shows low signal intensity on T1-weighted image and high signal intensity on T2-weight image. However, MRI of some congenital defects, such as arachnoid cyst, sacral meningocele, arachnoid diverticulum and meningeal cyst, and tumors, such as neurinoma and cavernous angioma, may show the same indication as pseudomeningocele. To differentiate these, the age of the patient, neurological findings and surgical history should be considered to make a diagnosis.

Previous reports of giant pseudomeningoceles have not recommended any definitive treatment[7,13]; however, we tried to show the algorithm for treatment of pseudomeningocele in Figure 6. Conservative treatment may be generally recommended in patients without significant symptoms. In some cases with mild symptoms within a few weeks after spinal surgery, implantation of a subarachnoid catheter might be effective. On the other hand, in cases with severe symptoms or beyond a few weeks after spinal surgery, extirpation of pseudomeningocele, dura repair with fascia patch and implantation of a subarachnoid catheter could be appended to deal with the symptoms. 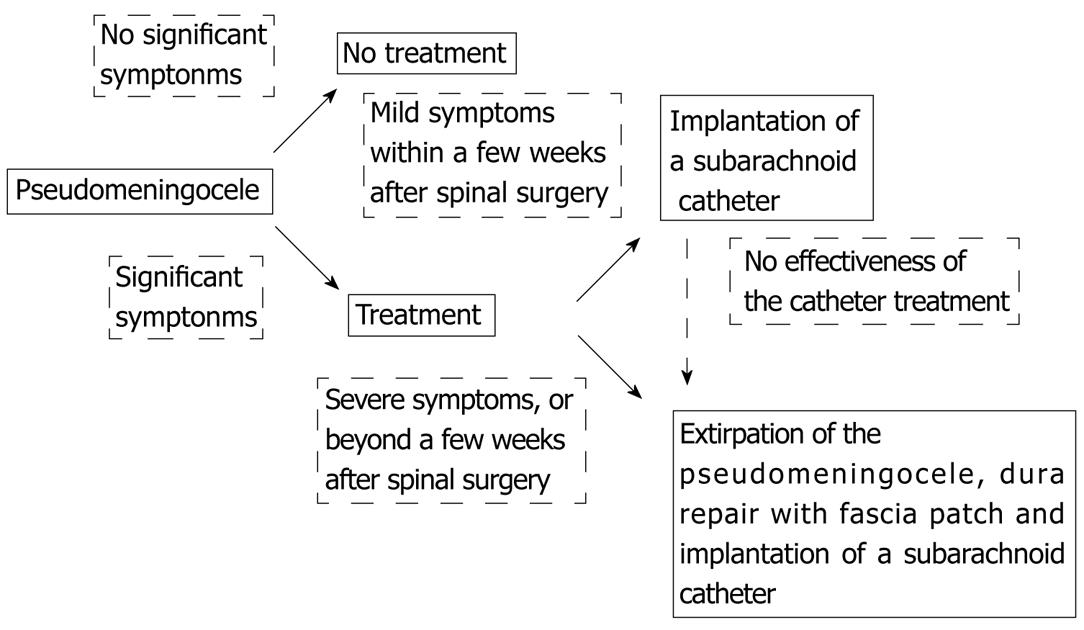 In the present case, a 59 year old patient with lung cancer, the pseudomeningocele measured 7 cm × 3 cm at 4 mo after laminectomy of C7, Th1, Th2 and fixation of C5-Th4. The patient showed no symptoms for up to 2 years postoperatively while the lesion progressed to 15 cm in diameter. At the second operation, no clear damage to the dura mater was observed but we retained the fatty tissue over the dura mater, coated this tissue with fibrin paste and placed a spinal drainage at the L3/4 level. In this case, there appears to be three possible causes for the development of the giant pseudomeningocele. The first was that the soft tissues and paravertebral muscles at the cervicothoracic level were damaged in the previous spinal surgery. The second was that high intradural pressure caused leakage of cerebrospinal fluid from a very small dural defect and this gradually pooled, causing enlargement of the lesion. The third was that the patient was asymptomatic for 2 years, allowing sufficient time for the formation of the giant pseudomeningocele.

In conclusion, we report this case, showing the biggest giant pseudomeningocele at the unusual cervicothoracic level.