Bone is continuously destroyed and reformed in vertebrates to maintain bone volume and calcium homeostasis. Osteoblasts and osteoclasts are specialized cells responsible for bone formation and bone resorption, respectively. Osteoblasts produce bone matrix proteins and take charge of mineralization of the tissue. Osteoclasts are multinucleated cells responsible for bone resorption. It has been well established that osteoclasts are formed from monocyte/macrophage lineage precursors under the strict regulation of osteoblasts, osteocytes, and bone marrow stromal cells (referred to as “osteoblasts” in this review).

Discovery of the RANKL-RANK signal in osteoclastogenesis has clarified the cause of some bone diseases in humans. Loss-of-function mutations in the OPG gene cause Juvenile Paget’s disease and idiopathic hyperphosphatasia[15-17]. Gain-of-function mutations in the RANK gene induce familial expansile osteolysis, familial Paget’s disease of bone, and expansile skeletal hyperphosphatasia[18]. Osteopetrosis due to few osteoclasts is caused by loss-of-function mutations in the RANK gene[19] and RANKL gene[20]. The phenotypes of these bone diseases in humans support the concept that RANKL expressed by osteoblasts stimulates osteoclast differentiation of precursors through the receptor RANK. Thus, the RANKL-RANK axis is the central pathway for osteoclastogenesis. Recent in vivo studies have also shown that osteoblasts regulate osteoclastogenesis through several mechanisms independent of M-CSF, RANKL and OPG production.

CHARACTERISTICS OF OSTEOCLAST PRECURSORS IN VIVO

Recent attempts to identify osteoclast precursors in vivo established a new role of osteoblasts in osteoclast differentiation. Mizoguchi et al[21] showed that cells expressing both RANK and c-Fms detected near osteoblasts in bone directly differentiated into osteoclasts without cell cycle progression (Figure 2). To clarify the relationship between differentiation and proliferation of osteoclast precursors, BrdU and M-CSF were simultaneously administrated to op/op mice. M-CSF administration induced many osteoclasts in bone in op/op mice. Most of the nuclei of osteoclasts induced by M-CSF were BrdU negative. Similarly, when BrdU and RANKL were administrated to RANKL-deficient mice, osteoclasts were also induced in bone. Most nuclei of RANKL-induced osteoclasts were BrdU negative. These results suggest that both M-CSF and RANKL induce the differentiation of osteoclast precursors into osteoclasts without cell cycle progression. In these experiments, M-CSF and RANKL were intraperitoneally injected into op/op mice and RANKL-deficient mice, respectively. Nevertheless, osteoclasts were observed only on the surface of calcified bone, not in the surrounding soft tissues. These results also suggest that neither RANKL nor M-CSF expressed by osteoblasts is involved in the determination of the correct site for osteoclast formation. Using immunohistochemistry, RANK and c-Fms double-positive cells as osteoclast precursors were detected along the bone surface in RANKL-deficient mice. RANK and c-Fms double-positive cells were always observed near osteoblasts, did not express Ki67, a marker of cell proliferation, and possessed a relatively long life span. Therefore, RANK and c-Fms double-positive cells were named “cell cycle-arrested quiescent osteoclast progenitors (QOPs)” (Figure 2). QOPs were also isolated from bone marrow and peripheral blood[22]. Bone marrow-derived QOPs failed to express macrophage-associated markers such as F4/80 and CD11b. Bone marrow-derived QOPs showed no phagocytic activity and did not proliferate in response to M-CSF. They differentiated into osteoclasts, but not into dendritic cells. Therefore, it has been concluded that QOPs are committed osteoclast precursors[22]. 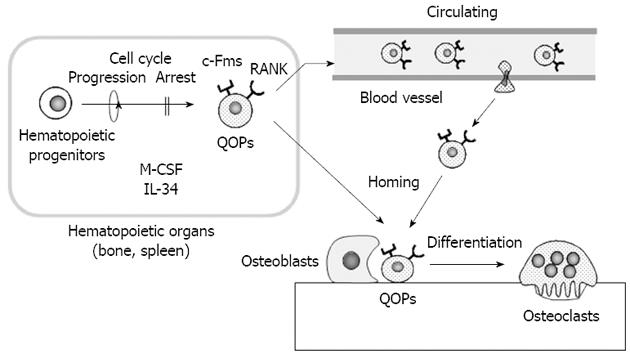 Figure 2 In vivo dynamics of osteoclast precursors. Cells expressing both receptor activator of nuclear factor-κB (RANK) and c-Fms are cell cycle-arrested quiescent osteoclast precursors (QOPs) in vivo. QOPs are detected in hematopoietic organs such as the spleen and bone. macrophage colony-stimulating factor (M-CSF) and/or interleukin 34 (IL-34) appear to be involved in the differentiation of hematopoietic progenitor cells into QOPs. Some QOPs circulate to find bone. Osteoblasts play a role in the homing of QOPs to bone. QOPs in bone differentiate into osteoclasts without cell cycle progression in response to M-CSF/IL-34 and RANK ligand.
ROLE OF IL-34 IN OSTEOCLASTOGENESIS

Recently, Lin et al[23] discovered IL-34 as a new ligand for c-Fms. The amino acid sequence of IL-34 was quite different from that of M-CSF, but IL-34 promoted macrophage colony formation similar to M-CSF. Chihara et al[24] reported that M-CSF and IL-34 used different signaling to induce the expression of several chemokines and suggested that they differentially regulated macrophage function. However, IL-34 as well as M-CSF, in combination with RANKL, induced osteoclast formation in mouse and human cell culture systems[25]. IL-34 was specifically expressed in splenic tissues, predominantly in the red pulp region. Recently, Nakamichi et al[26] showed that RANK and c-Fms double-positive QOPs did not exist in bone, but existed in the spleen of op/op mice (Figure 2). IL-34 was highly expressed in vascular endothelial cells in the spleen. Vascular endothelial cells in bone also expressed IL-34, but its expression level was much lower than that in the spleen, suggesting a role of IL-34 in the splenic maintenance of QOPs. Indeed, removal of the spleen (splenectomy) completely blocked M-CSF-induced osteoclast formation in op/op mice. Osteoclasts appeared in aged op/op mice with up-regulation of IL-34 expression in the spleen and bone. Splenectomy also blocked the age-associated appearance of osteoclasts[26]. These results suggest that IL-34 plays a pivotal role in maintaining the splenic reservoir of QOPs, which are transferred to bone in response to M-CSF administration in op/op mice (Figure 2). Recently, sphingosine-1-phosphate, a lipid mediator regulating immune cell trafficking, was shown to regulate the migration of osteoclast precursors[22,27]. Osteoblasts appear to help homing of QOPs to bone. Thus, osteoblasts determine the distribution of QOPs, which decide the correct sites of osteoclast formation. 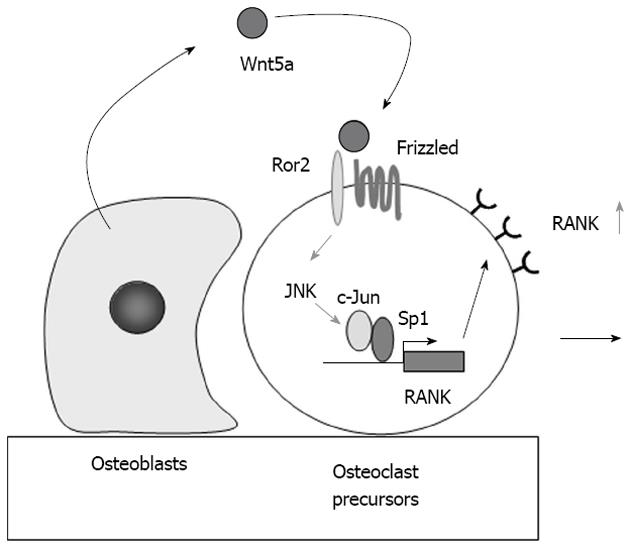 Wnt binds to two distinct receptor complexes: a complex of Frizzled and low density lipoprotein receptor-related protein 5/6 (LRP5/6) and another complex of Frizzled and receptor tyrosine kinase-like orphan receptors (Rors)[30]. The binding of Wnts to these Wnt receptors activates two classes of signaling pathways: a β-catenin-dependent (canonical) pathway and β-catenin-independent (non-canonical) pathway. The importance of the canonical pathway in bone metabolism has been emphasized by the identification of a link between bone mass and mutations in the LRP5 gene. Loss-of-function mutations in LRP5 reduced the number of osteoblasts and caused osteoporosis[31]. Glass et al[32] developed mice expressing a stabilized form of β-catenin in osteoblasts (β-catenin mutant mice) and reported that β-catenin mutant mice developed severe osteopetrosis due to the up-regulation of OPG expression. Thus, Wnt/β-catenin signaling is crucial in osteoblastogenesis and osteoclastogenesis. However, the role of the non-canonical Wnt pathway in bone resorption remains largely unknown.

Koga et al[34] showed for the first time that osteoclastogenesis induced by RANKL also requires co-stimulatory receptor signaling through adaptors containing immunoreceptor tyrosine-based activation motifs (ITAMs), such as Fc receptor common γ (FcRγ) and DNAX-activating protein of 12 kDa (DAP12). RANK and ITAM signaling cooperated to induce NFATc1, the master transcription factor for osteoclastogenesis. FcRγ and DAP12 are adaptor molecules that associate with immunoglobulin-like receptors such as osteoclast-associated receptor (OSCAR) and triggering receptor expressed on myeloid cells 2 (TREM-2). OSCAR uses FcRγ, while TREM-2 associates with DAP12. Koga et al[34] showed that deficiencies in both FcRγ and DAP12 caused osteopetrotic phenotypes in mice. Because this pathway is crucial for the robust induction of NFATc1 that leads to osteoclastogenesis, these signals are called co-stimulatory signals for RANK in osteoclastogenesis. Recently, Barrow et al[35] reported that OSCAR bound to a specific motif of collagen and stimulated osteoclastogenesis. These series of experiments have established a new research area called “osteoimmunology”[36]. 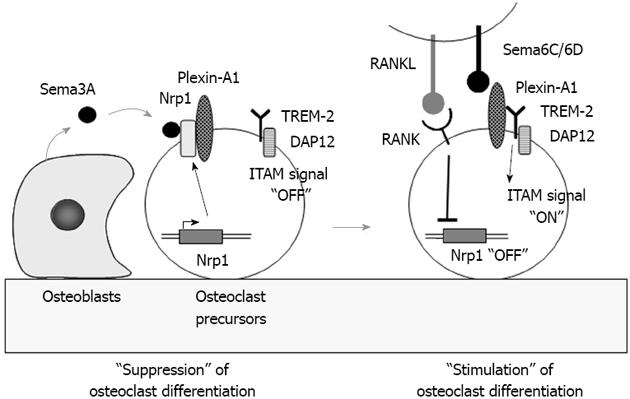 Secreted OPG acts as a decoy receptor of RANKL to compete with RANK on the surface of osteoclast lineage cells. OPG is expressed in osteoblasts and inhibits both osteoclast formation and function. Therefore, biological agents such as an antibody against RANKL have been developed and successfully suppress bone loss. Denosumab, an anti-RANKL antibody, has achieved the most success in the treatment of osteoporosis, tumor-related bone disorders, and arthritis[39-41].

Expression levels of Wnt5a and frizzled 5 are higher in the synovial tissue of rheumatoid arthritis (RA) patients than in those of osteoarthritis[42]. Wnt5a stimulated the production of pro-inflammatory cytokines such as IL-6 and IL-8 in synoviocytes. Treatment of RA patient-derived synoviocytes with antibodies against frizzled 5, one of the receptors for Wnt5a, diminished the production of RANKL[43]. These findings suggest that Wnt5a promotes pro-inflammatory cytokine production and enhances bone resorption through the production of RANKL in the pathogenesis of RA. In addition, Ror2, another receptor for Wnt5a, is expressed in osteoclast progenitors and co-stimulated non-canonical Wnt signaling[29]. Wnt5a enhanced osteoclast formation in mouse bone marrow macrophage cultures. Administration of glutathione-S-transferase-fused soluble Ror2 restored bone destruction caused by collagen-induced arthritis in mice[29]. These results suggest that Wnt5a is involved in bone destruction in chronic inflammatory diseases. Molecules involved in non-canonical Wnt signaling may be therapeutic targets for the treatment of patients suffering from RA and periodontitis.

The finding of Sema3A has invented a new concept that osteoblasts themselves express a bifunctional factor that induces osteoblastogenesis and inhibits osteoclastogenesis. Sema3A may inhibit bone loss without affecting the coupling system between osteoblasts and osteoclasts. Takayanagi and his colleagues[37] have demonstrated that administration of recombinant Sema3A increases bone volume and expedites bone regeneration in osteoporotic mice established by ovariectomy. Thus, Sema3A is a promising anabolic factor possessing an inhibitory activity on bone resorption.