AIM: To assess the appropriateness of prescribing acid suppressive therapy (AST) in a general medicine service in a tertiary care hospital.

METHODS: In this retrospective observational study, we reviewed the inpatient records of all patients admitted to the general medical service in a tertiary care hospital in Beirut, Lebanon, from April 1 to May 31, 2011. Treatment with AST was considered appropriate if the patient had a specific indication or appropriate treatment purpose [e.g., gastro-esophageal reflux disease (GERD), peptic ulcer disease, dyspepsia, acute or suspected gastrointestinal (GI) bleeding]. Appropriate administration of stress ulcer prophylaxis (SUP) was derived from an internal guideline that is based on the American Society of Health System Pharmacists guidelines. Prophylaxis was considered appropriate if a patient had 1 absolute indication (coagulopathy or requiring mechanical ventilation), or 2 or more relative indications (sepsis, occult bleeding, use of high dose corticosteroids, recent use of non-steroidal anti-inflammatory drugs for more than 3 mo, renal or liver failure, enteral feeding and anticoagulant use).

CONCLUSION: AST is overused in hospitalized non-critically ill patients and many patients are discharged on unnecessary AST which can increase cost, drug interactions and adverse events. Potential interventions include implementation of institutional protocols and prescriber education.

Acid suppressive therapy (AST), mainly proton pump inhibitors (PPIs) and histamine-2 receptor antagonists (H2RAs), is indicated in a number of acid-related disorders, including the treatment of upper gastrointestinal (GI) bleeding, gastro-esophageal reflux disease (GERD), erosive gastritis or esophagitis, dyspepsia, reduction of GI ulcers and complications in patients taking non-steroidal anti-inflammatory drugs (NSAIDs), peptic ulcer disease (PUD) and stress ulcer prophylaxis (SUP) in high risk patients. Current evidence suggests that AST is commonly prescribed for SUP to hospitalized non-critically ill patients without an appropriate indication[1-7]. While in appropriately selected patients in the intensive care unit (ICU) prophylaxis appears to be beneficial, according to the American Society of Health System Pharmacists (ASHP), prophylaxis is not recommended or supported for medical patients who are not in an ICU[8]. Important factors noted in the ASHP guidelines include mechanical ventilation for more than 48 h and coagulopathy, or the presence of 2 or more risk factors. Reasons behind unjustified AST prescribing habits are often unclear and a large number of patients receive this form of therapy with no apparent indication. Furthermore, it appears that once AST is started, medications are continued even after discharge, resulting in unnecessary increased drug cost and adverse events[1,4]. The purpose of this study was to assess the appropriateness of prescribing AST therapy in a general medicine service in a tertiary care hospital.

All patients were assessed for indications for AST, whether AST was received, the choice of AST, dosage, duration of treatment, route of administration and whether AST was continued after discharge.

One hundred and fifty-three patients were admitted during the study period and included in the analysis. The mean age was 59.8 ± 16.8 (mean ± SD) and 51% were females. Of the admitted patients, 130 (85%) were started on AST, out of which 11 (8.5%) were non-SUP indications and had a diagnosis that supports the use of this therapy (GI bleed, gastritis, esophagitis and GERD), 16 (12.3%) had an absolute indication for SUP, 59 (45.4%) had 2 or more relative indications for SUP and 44 (33.8%) received AST without an appropriate indication (Figure 1). In addition, one patient with an absolute indication for SUP and four with two or more relative indications did not receive AST. Ninety-two patients (70.8%) received AST by the oral route, while 38 patients (29.2%) received it intravenously. Rabeprazole was the most frequently used AST (59.2%), followed by omeprazole (24.6%), esomeprazole (11.6%) and ranitidine (4.6%). Of patients receiving AST for SUP, 95% were prescribed PPIs. The dose of AST was appropriate in 126 patients (96.9%) and the route of administration was appropriate in 123 patients (94.6%). Of the 130 AST medical orders, 129 (99.2%) were written by medical residents while only one was written by an attending physician. No adverse reactions were documented during the study period. The mean length of stay was 13.7 ± 11.0 d. Fifteen of the admitted patients (10%) were discharged on AST, 7 of which (47%) did not have an appropriate indication. 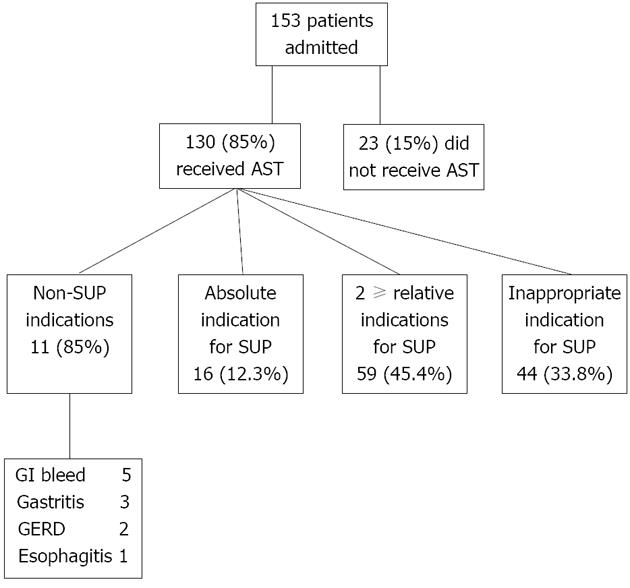 There is a rapid increase in AST in hospitalized patients. In our study, a total of 85% of hospitalized non-critically ill patients received AST during the study period and this percentage is more than what has been reported by others (ranging between 27% and 71%)[1-4,7]. Our study showed that AST use in non-critically ill patients is frequently inappropriate. Of the patients included in the study period, 33.8% received AST without an appropriate indication, 3.1% received wrong doses, 5.4% received intravenous AST while they were able to eat or take other oral medications, and almost half of the patients discharged on AST did not need it. The majority of prescriptions were made by medical residents.

Our results agree with previous reports on the overuse of AST in hospitalized patients. In a single day survey of hospitalized patients at 20 centers in Italy, Gullotta et al[2] found that 27% received AST, of which 51% was inappropriate. In addition, Nardino et al[1] reported the overuse of AST in a large community hospital in United States where 54% of hospitalized patients received AST, 65% of which were inappropriate. Pham et al[3] reported that only 10% of patients receiving AST in an internal medicine service were found to have an acceptable indication. Furthermore, Parente et al[4] reported that in hospitalized patients receiving AST, 68% of prescriptions were inappropriate, most of which were for SUP in low-risk patients. Finally, Hwang et al[7] reported that in non-critically ill patients in a teaching service 54.9% received AST, of which at least 58.5% was inappropriate. In our study, all the unnecessary AST use was attributed to the SUP indication. Although the indications for AST for the treatment of acid-related diseases and the prevention of gastric mucosal damage in an ICU setting has been well defined in the medical literature, in recent years the practice of SUP has become increasingly common in general medicine patients, with little to no evidence to support it. We assessed the appropriateness of SUP based on an internal guideline that is derived from the only published guidelines addressing SUP, the ASHP guidelines[8]. Since the guidelines only endorse SUP for selected ICU patients, there is an urgent need for SUP guidelines for patients outside the ICU. Whether any non-ICU patients should receive SUP needs to be determined. Although the majority of unnecessary AST prescriptions were written by medical residents, it is unclear whether the decisions to give SUP were made by the attending physicians or residents as many residents might have prescribed SUP at the request of the attending physicians.

The ASHP guidelines, published in 1999, do not include recommendations on the use of PPIs for SUP, yet they were the most frequently used agents in our study for that purpose (95%). This is consistent with recent reports showing that PPIs are more commonly being used for SUP despite limited data regarding their use for this indication[9]. A recent meta-analysis comparing the safety and efficacy of PPIs vs H2RAs for SUP in critical care patients did not find strong evidence that PPIs were different from H2RAs in terms of stress-related upper GI bleeding prophylaxis, pneumonia and mortality[10]. On the other hand, another meta-analysis concluded that in critically-ill patients, PPI use was associated with a significantly lower rate of clinically important bleeding than H2RAs with similar rates of nosocomial pneumonia[11]. Based on available evidence, additional comparative studies with adequate patient numbers and pharmacoeconomic analyses are needed before PPIs can be considered the agents of choice for SUP in either ICU or non-ICU settings.

Although AST is often viewed as safe, it is associated with increased colonization of the upper GI tract with potentially pathogenic organisms, which was found to increase the risk of hospital-acquired pneumonia[12]. In addition, gastric acid is an important defense against the acquisition of Clostridium difficile spores and, by increasing gastric pH when using AST, the risk of Clostridium difficile infection will increase[13-15]. Furthermore, AST has the potential for drug-drug, drug-nutrient and drug-test interactions through a variety of mechanisms, as well as having agent-specific side effects[8]. The practice of prescribing SUP in non-ICU hospitalized patients has substantial financial ramifications for both patients and hospitals. The cost of inappropriate SUP in non-ICU hospitalized patients was found in one trial to exceed $ 111 000 for one year[5].

Possible weaknesses of our study include the retrospective design and chart review. In addition, the study was conducted at a single center. Furthermore, it is difficult to fully extrapolate 2 mo data to a year as variation in prescribing habits may exist as medical residents acquire skills in the academic year cycle. Possible interventions to address unnecessary AST use include education of residents, junior medical staff and pharmacists, the use of ordering templates, and implementing internal guidelines for the appropriate AST use. Liberman et al[16] were able to reduce the rate of inappropriate SUP significantly by sparing one out of every 3 patients an inappropriate medication by conducting a low-cost educational intervention based on the principles of practice-based learning and improvement.

In our study, there was a high frequency of unnecessary use of AST in hospitalized non-critically ill patients with inappropriate continuation after discharge. Unnecessary AST can increase cost, drug interactions and adverse events. The results of our study highlight the need for interventions, including implementation of institutional protocols and prescriber education.

Current evidence suggests that AST is commonly prescribed for SUP to hospitalized non-critically ill patients without appropriate indication. Furthermore, it appears that once AST is started, medications are continued even after discharge, resulting in unnecessary increased drug cost and adverse events.

The high frequency of unnecessary use of AST in hospitalized non-critically ill patients with inappropriate continuation after discharge can increase cost, drug interactions and adverse events. There is a need for interventions, including implementation of institutional protocols and prescriber education.

In this study, the authors reviewed medical records to assess whether or not prescribing AST to patients admitted to the general medical service in a tertiary care hospital in Beirut, Lebanon, from April 1 to May 31, 2011 was justified. The authors found that 33.8% of the patients in the study received acid suppressive treatment without an appropriate indication. The paper is well written and provides some useful information on the over use of PPIs in hospitalized patients.