Melatonin is used in many countries to improve sleep disorders. Melatonin is a hormone produced by the pineal gland and enterochromaffin cells which control sleep and gastrointestinal motility. Low levels of melatonin lead to gastroesophageal reflux disease (GERD). Most of patients with GERD have a sleep disorder. So, low melatonin levels is the main cause of insomnia. Beyond this, it has an inhibitory action on gastric acid secretion and seems to control the lower esophageal sphincter. Proton pump inhibitors (PPIs) are a group of drugs whose main action is a pronounced and long-lasting reduction of gastric acid production. They are the most potent inhibitors of acid secretion available today. Omeprazole (one of the PPIs) and melatonin have similarities in their chemical structures. Therefore, we could consider omeprazole as a rough copy of melatonin. In this paper, we compare the advantages and disadvantages of the clinical use of melatonin and PPIs.

Melatonin, also known chemically as N-acetyl-5-methoxytryptamine, is a hormone found in animals, plants and microorganisms[1,2]. In animals, it regulates sleep (circadian rhythms)[3] and gastrointestinal (GI) functions[4].

Proton pump inhibitors (PPIs) (pantoprazole, lansoprazole, rabeprazole, esomeprazole and omeprazole) are a group of drugs whose main action is a pronounced and long-lasting reduction of gastric acid production[5].

Melatonin is synthesized from tryptophan in a sequence of reactions depicted in Figure 1.

Figure 1 A schematic illustration of the synthesis of melatonin from tryptophan and serotonin.

The gastrointestinal tract represents the most important extra pineal source of melatonin (it secretes 400 times than pineal gland). The presence of melatonin suggests that this hormone is somehow involved in digestive pathophysiology. Release of GI melatonin from serotonin-rich enterochromaffin cells of the GI mucosa suggest a close antagonistic relationship with serotonin and seems to be related to periodicity of food intake[4,6].

Bubenik et al[7] demonstrated that a 4-wk administration of melatonin in the diet significantly reduced the incidence of spontaneous gastric ulcers in young pigs. The ulcers in this case may have been due to a local deficiency of the melatonin synthesis[7].

Recently, melatonin (combined with other natural supplements) was successfully used to heal a patient with a giant ulcer of 6 cm (about 3.2 inches). This type of ulcer is typical of HIV positive patients. This patient took omeprazole and other PPIs prescribed by gastroenterologists for months. Neither treatment produced even partial relief of his symptoms. Subsequently, he started to lose weight because he could no longer eat properly because of the acute pain, impaired swallowing and massive hematemesis. Even when he tried to drink an apple blended with water he vomitted blood. As a consequence, he lost 40 kg in 6 mo. After he consulted five gastroenterologists, he was recommended to our research group. We prescribed him the above mentioned formula with melatonin, vitamins and amino acid. In 32 d of treatment, he regained 30 kg (Figure 2) and the ulcer was cured (Figure 3)[8]. Figures 3 and 4 show his endoscopy biopsy records before and after treatment[8,9]. 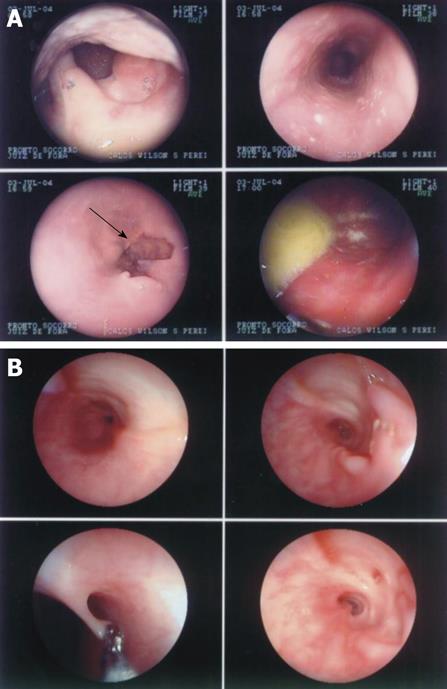 Figure 3 Endoscopy records performed on patient (of the group A)[8,9]. A: July 2003: Showing the ulcer (indicated by an arrow); B: July 2004: Showing that the ulcer had practically disappeared after 9 mo of treatment. 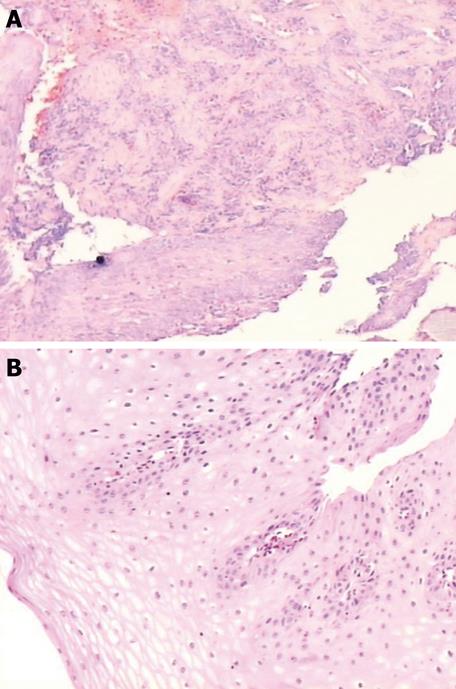 Figure 4 Histological cuttings of a biopsy from a patient with an ulcer of 6 cm (3. 2 inches)[8,9]. A: During the period of ulcer; B: After the treatment with melatonin, vitamins and tryptophan.

The same formula mentioned above (melatonin combined with other natural supplements) was also utilized in a randomized single-blind clinical trial of 351 human subjects with gastroesophageal reflux disease (GERD) and compared with omeprazole (group B)[9]. In this case, melatonin (combined with amino acids and vitamins) is better than omeprazole alone[9].

All patients with GERD reported that the symptoms started after a strong period of stress such as death of a beloved person, robbery, bankruptcy, financial loss, rape, assault, kidnapping, fighting in war, imprisonment, natural catastrophes and car, bus, train, airplane accidents etc. (data not shown).

These results with this formula (melatonin, vitamins and amino acids) were confirmed by other research group in a case report[4].

PPIs are utilized in the treatment of many conditions such as dyspepsia, peptic ulcer disease, prevention of stress gastritis, gastroesophageal reflux disease, extraesophageal reflux disease, Barrett’s esophagus, gastrinomas and other conditions that cause hypersecretion of acid such as Zollinger-Ellison syndrome. The effectiveness of PPIs has not been demonstrated in every case despite their widespread use for these conditions. For example, PPIs do not change the length of Barrett’s esophagus[5,11].

Omeprazole and melatonin have similarities in their chemical structures and, in this case, we could consider omeprazole as a rough copy of melatonin (Figure 5). 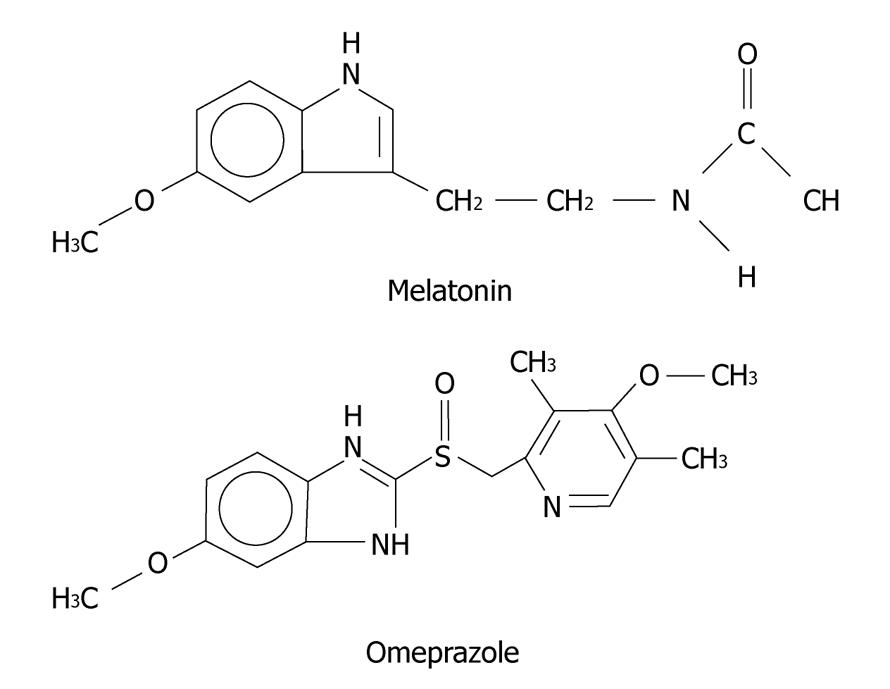 Figure 5 Chemical structure of melatonin and omeprazole.
MECHANISM OF ACTION 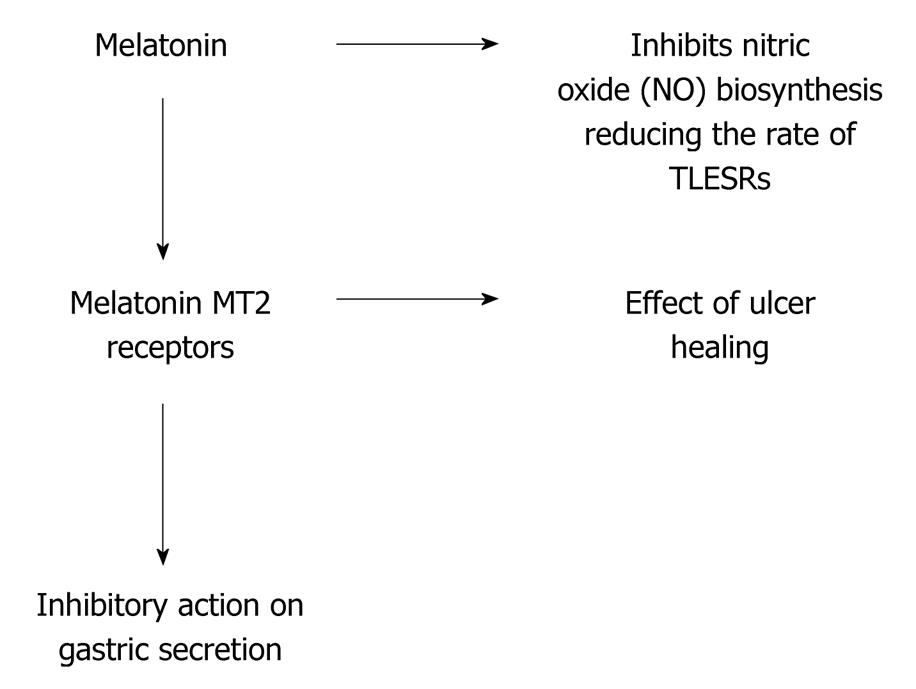 Transient lower esophageal sphincter relaxation (TLESR) is a major mechanism of reflux in patients with GERD. Nitric oxide has an important role in TLESR[14]. Melatonin inhibits nitric oxide biosynthesis[13] which may explain the regression of GERD symptoms (Figure 6)[9].

Synthetic melatonin (2 mg) has no significant side effects even if taken during 12 mo at low doses[8,9].

PPIs have potentially serious adverse side effects. They abolish acid production so completely that serum gastrin levels rise. In rodents, enterochromaffin-like cell tumors and carcinoid tumors have developed. It is not known whether these drugs are carcinogenic in humans by a similar mechanism[5,15]. Melatonin is secreted by enterochromaffin cells[4,6] and if PPIs can develop enterochromaffin-like cell tumors and carcinoid tumors in rodents, we assume that therapy with PPIs can be dangerous.

Moreover, bacterial overgrowth may develop in the stomach in the absence of acid. Bacterial metabolism of dietary nitrites may then lead to the production of N-nitroso compounds that are carcinogenic[5,16]. This risk is not limited to chronic omeprazole treatment; it can theoretically occur with any effective long-term antacid regimen. Moreover, omeprazole appears to affect cytochrome P450. Although initial studies suggested an inhibitory effect, more recent studies indicate that omeprazole may induce the cytochrome P450 1A subfamily that is associated with activation of certain chemical procarcinogens such as polycyclic aromatic hydrocarbons[5].

Patients who receive PPIs have a higher incidence of hospital-acquired pneumonia, Clostridium difficile infection and other less severe side effects[17,18].

Ethological research suggests that the experience of trauma during key development periods can result in persistent changes in brain morphology and function and lead to increased vulnerability to subsequent adversities[20]. PTSD may cause tryptophan depletion[20-22]. Melatonin secretion decreases in patients with tryptophan depletion[23]. Melatonin low level leads to insomnia and gastrointestinal disorders such as ulcers and GERD[6,8,9].

PTSD causes tryptophan depletion and, as a consequence, low levels of melatonin. The latter is responsible for the control of the lower esophageal sphincter and gastric acid secretion. This hormone is produced by the pineal gland and enterochromaffin cells and it seems that these cells are damaged by PPIs. Based on this rationale, how could we say that therapy with PPIs is safe?

At the present moment, three hospitals in the USA are starting a stop order policy for all PPIs. They are interested in conducting further studies with melatonin (associated with amino acids and vitamins) in order to replace the therapy with PPIs. The formula with melatonin associated with amino acid and vitamins is a very promising therapy with no significant side effects and very effective in terms of cure of giant ulcers (which are typical of HIV positive patients). PPIs can not regress or heal this type of ulcer. On the other hand, melatonin alone in human beings is less effective than omeprazole.