For manufacture of CaG-NANA, calcium (Ca) was combined with glycomacropeptide (GMP) by chelating, and N-acetylneuraminic acid (NANA) was produced with Ca-GMP substrate by an enzymatic method. The final concentration of each component was 5% Ca, 7% NANA, 85% GMP, and 3% water. For in vitro study, various concentrations of CaG-NANA were investigated under the minimal inhibitory concentration (MIC). For in vivo study, CaG-NANA was administered orally for 3 wk after H. pylori infection. The levels of inflammatory cytokines in blood were analyzed by enzyme-linked immunosorbent assay and eradication of H. pylori was assessed by histological observation.

The time-kill curves showed a persistent decrease in cell numbers, which depended on the dose of CaG-NANA, and MIC of CaG-NANA against H. pylori was 0.5% in vitro. Histopathologic observation revealed no obvious inflammation or pathologic changes in the gastric mucosa in the CaG-NANA treatment group in vivo. The colonization of H. pylori was reduced after CaG-NANA treatment. The levels of interleukin (IL)-6, IL-1β, tumor necrosis factor-α, and IL-10 were also decreased by CaG-NANA.

CaG-NANA demonstrates effective anti-bactericidal activity against H. pylori both in vitro and in vivo.

Helicobacter pylori (H. pylori) has been reported to be associated with many gastrointestinal diseases such as chronic gastritis, peptic ulcers, gastric carcinoma, and mucosa-associated lymphoid tissue lymphoma[1-3]. Until now, standard triple therapy consisting of a proton pump inhibitor and two broad-spectrum antibiotics, usually amoxicillin, clarithromycin or metronidazole, has been able to achieve eradication[3-5]. However, the Maastricht IV Consensus report recommended the careful choice of the antibiotic combination for treatment according to local H. pylori antibiotic resistance patterns due to multidrug resistance of H. pylori. For example, the concentrations of antibiotics for treatment of H. pylori infection were required at four times when H. pylori had local clarithromycin resistance[6]. Since antibiotic abuse had side effects and allowed development of resistance to antibiotics, alternative strategies have been proposed to counteract H. pylori infection. As an alternative approach, preservation of mucus from H. pylori attachment is emphasized because H. pylori infection disrupted the epithelial barrier which resulted in inflammation or cancer[7]. For example, dietary inhibitors such as lacto-oligosaccharide has been suggested as a solution for H. pylori infections[8]. Although oligosaccharides specific for the H. pylori lectins may potentially act as inhibitors of adhesion to mucus, their production in commercial amounts as anti-adhesion therapeutic agents is still a problem[9,10]. Here, we introduce a new N-acetylneuraminic acid (NANA) combined glycomacropeptide (GMP) which was made from milk serum hydrolysis protein powder as an anti-H. pylori agent. Wadström et al[11] reported that NANA derivative had an adhesion potential to H. pylori lectins and Hirmo et al[12] reported that milk glycoprotein had an anti-H. pylori effect. We designed a new material with NANA, GMP, and calcium (CaG-NANA), and anti-H. pylori activities of CaG-NANA were investigated both in vitro and in vivo.

CaG-NANA and each component of CaG-NANA were provided by MediNutrol (Kwangju, South Korea). As shown in Figure 1A, CaG-NANA was manufactured from calcium (Ca), GMP, and NANA by chelating and enzyme methods where the component concentrations were 5%, 85%, and 7%, respectively. For comparing each produced compound, we wrote abbreviated form as standard NANA (S-NANA), GMP linked NANA (G-NANA), and calcium chelated G-NANA (CaG-NANA). 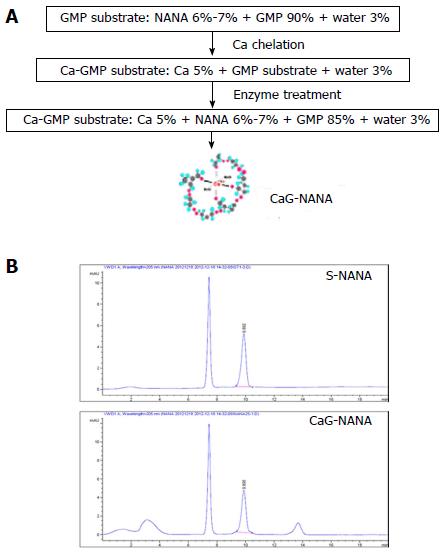 Culture and collection of H. pylori

Inhibitory effect of CaG-NANA on H. pylori in vitro

The inhibitory activity of CaG-NANA against the growth of H. pylori was assessed using an agar dilution method. Briefly, 0.1%, 0.25%, or 0.5% of CaG-NANA and its components were added to the Brucella agar. The non-drug agar served as a negative control. Agar plates were inoculated with H. pylori at serial concentrations of 1 × 108, 1 × 107, and 1 × 106 colony forming units (CFU)/mL and cultured for 72 h. The minimal inhibitory concentration (MIC) was defined as the minimal concentration of CaG-NANA required for complete inhibition of H. pylori growth. The colonies were counted using image J (https://imagej.nih.gov/ij/) after 72 h incubation and the average number was calculated. Bactericidal activity was evaluated using time-kill curves with 0.5, 1.0 and 2.0 × MIC of CaG-NANA compared with the blank controls.

Mice (n = 40) were randomly divided into four groups: Blank control, H. pylori infected control, antibiotic treatment, and CaG-NANA treatment. H. pylori (1 × 109 /mL) was administered by gastric intubation to mice three times in a week except the blank control, and H. pylori infection was detected with gastric irrigation from randomly selected mice using an H. pylori detection test kit which was purchased from Pronto Dry (Brignais, France; Supple 1A). The antibiotic treatment was performed with a suspension of amoxicillin (12.33 mg/kg), metronidazole (164.40 mg/kg), and clarithromycin (205.54 mg/kg) which were equivalent to clinical administration (Dankook University hospital, Korea). Treatments with CaG-NANA and each component including NANA, S-NANA, and G-NANA were performed by oral administration every day for 3 wk, and the experimental design is shown in Figure 2A. 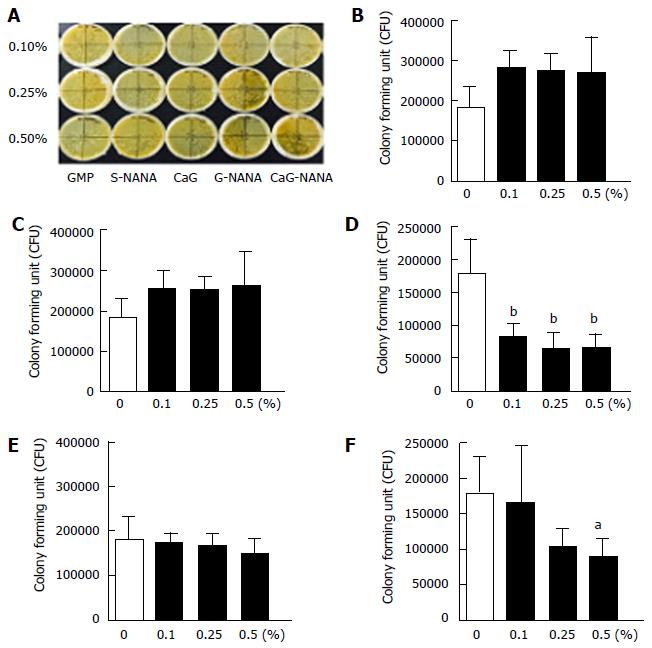 The animals were deprived of feed but allowed free access to water for 24 h before sacrificed. At the end of sacrifice, blood was collected from mouse and gastric tissues were removed and fixed in 10% formalin. After fixation, tissues were processed and embedded in paraffin. The paraffin blocks were cut into 4 μm sections and stained with Harris’ hematoxylin and eosin for histological observation under a microscope (BX51, Olympus, Miami, FL, United States).

As shown Figure 1B, the NANA component of CaG-NANA showed the same purity as standard NANA.

Inhibitory effect of CaG-NANA on H. pylori in vitro

The bactericidal effects of CaG-NANA and each component against H. pylori were assessed in vitro. We described previously that CaG-NANA is composed of NANA, GMP and calcium, thus we tested the anti-bacterial effects of every component used in CaG-NANA synthesis. As shown in Figure 1, S-NANA, G-NANA and CaG-NANA had an anti-bacterial effect (Figure 1D, E and F) whereas GMP and GMP with calcium (CaG) had no activity in the colony forming assay (Figure 1B and C).

This result indicated that only NANA included compound had anti-bacterial activity.

Inhibitory effect of CaG-NANA on H. pylori in vivo

For the in vivo study, we divided mice into four groups and 1 × 109/mL CFU of H. pylori was administered into mice three times for one week except the negative group. H. pylori infection was confirmed by gastric irrigation using an H. pylori detection test kit (Pronto Dry). After confirmation, treatments with antibiotics, CaG-NANA and its components were orally administered every day for 3 wk. The doses of antibiotics were described in the “Material and Methods” section (Figure 3A). The doses of CaG-NANA and its components were fixed at 0.5% (v/w). We followed the mouse weight after treatment. As shown in Figure 3B, mouse weight was decreased in the S-NANA and H. pylori positive control groups. From this result, S-NANA was considered to have toxicity at 0.5% of concentration. 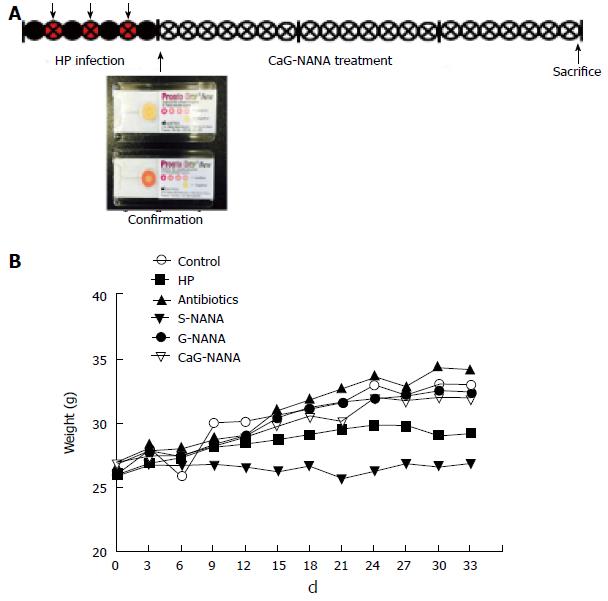 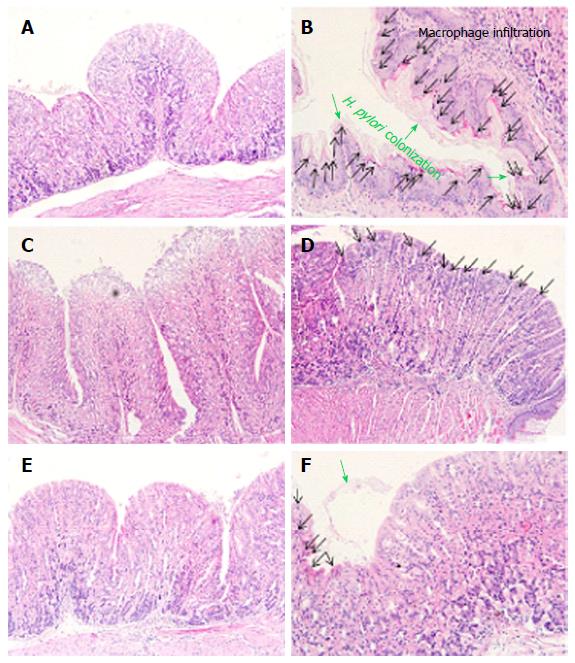 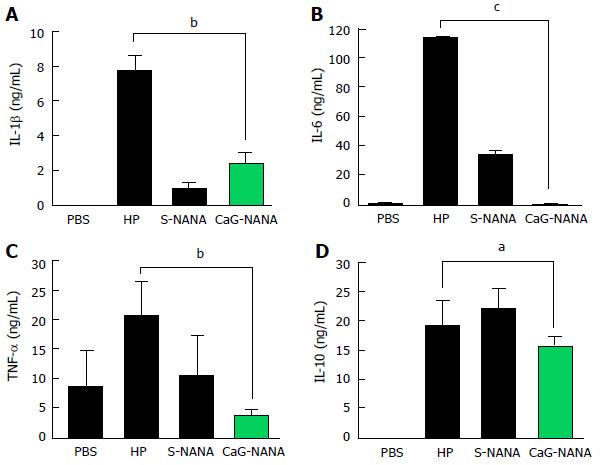 The anti-H. pylori effects of antibiotic formulas have been investigated, but the findings are limited by varying drug quality and sources, as well as the numerous and complicated components of formulas. Thus, it has been suggested that dietary inhibitors may be a solution for certain infections as an alternative approach[8]. Eradication of H. pylori has remained difficult for reasons that lie in the biology and environment of the organism. H. pylori populations colonize epithelial cells that line the antrum of the stomach and survive in the acidic environment[13]. Most anti-microbial agents are poorly secreted in the gastric mucosa because of the stomach environment[14], and the residues expressed on H. pylori enable specific binding to the mucus layers. Thus, CaG-NANA was excogitated to overcome the acidic environment of the stomach and have bactericidal activity by interrupting glycol-conjugation of H. pylori on the mucosa.

CaG-NANA, a compound of N-acetylneuraminic acid with calcium combined glycomacropeptide, demonstrated an anti-bacterial effect against H. pylori. We manufactured CaG-NANA as a dietary inhibitor against H. pylori; NANA was demonstrated as an H. pylori adhesion blocker[9,15,16], glycomacropeptide was used for modulating the acidic phase of the stomach, and calcium was inserted for improvement as functional food. NANA content in CaG-NANA was evaluated compared to S-NANA by HPLC, which confirmed its content and purity (Figure 1B). CaG-NANA at concentrations > 0.25% regulated the population of H. pylori in vitro. S-NANA also decreased the population of H. pylori in vitro (Figure 2D); however, S-NANA resulted in a severe weight loss in vivo (Figure 3B), which demonstrated that S-NANA treatment only had negative utility. Meanwhile, G-NANA and CaG-NANA had bactericidal and anti-adhesion effects on glyco-conjugation of the mucosa without toxicity. Bacterial attachment is mediated by outer membrane adhesions that bind to glycoconjugates present in the gastric mucus layer and lining the surface epithelium of the gastric mucosa[17].

This study suggests that it is possible to decrease the number of H. pylori or its activation in the stomach through a regular ingestion of N-acetylneuraminic acid containing glycomacropeptide as dietary products. Moreover, CaG-NANA is a complex compound which can be manufactured in large scale at a low cost under good manufacturing practice (GMP). In conclusion, the anti-H. pylori effects of CaG-NANA were confirmed both in vitro and in vivo, which provided experimental support for future human trials.

Helicobacter pylori (H. pylori) has been reported to be associated with many gastrointestinal diseases such as chronic gastritis, peptic ulcers, gastric carcinoma, and mucosa-associated lymphoid tissue lymphoma. Until now, standard triple therapy consisting of a proton pump inhibitor and two broad-spectrum antibiotics, usually amoxicillin, clarithromycin or metronidazole, has been able to achieve eradication.

The authors introduce a new N-acetylneuraminic acid (NANA) combined glycomacropeptide (GMP) which was made from milk serum hydrolysis protein powder as an anti-H. pylori agent. Wadstorm et al reported that NANA derivative had an adhesion potential to H. pylori lectins and Hirmo et al reported that milk glycoprotein had an anti-H. pylori effect. The authors designed a new material with NANA, GMP, and calcium (CaG-NANA), and anti-H. pylori activities of CaG-NANA were investigated both in vitro and in vivo.

The anti-H. pylori effects of CaG-NANA were confirmed both in vitro and in vivo, which provided experimental support for future human trials.

CaG-NANA is a complex compound which can be manufactured in a large scale at a low cost under GMP.

In the present paper, entitled “Anti-Helicobacter pylori effect of CaG-NANA, a new sialic acid derivative”, Rhee H et al have investigated the effect of a compound named Cag-NANA in an animal model of H. pylori-associated gastritis and, in vitro, in bacterial cultures.

Animal care and use statement: The ICR mice (20-22 g) were housed in pathogen free environment and had free access to sterile neutral water and standard mouse feed. Oral administration was performed with conscious animals using sonde appropriate for the animal size.