Familial gastrointestinal stromal tumor (GIST) is a rare autosomal dominant disorder associated with mutations in the KIT gene in the majority of cases. Although, exon 11 appears to be the hot spot region for approximately 95% of germline mutations, pathogenic variations have also been identified in exon 8, 13 and 17. Exon 13 germline mutations are extremely rare amongst familial GISTs and seven families with a germline mutation have been reported to date. Moreover, the role of imatinib mesylate in this rare familiar settings is not completely known so far. We describe here clinical, imaging, pathological and genetic findings of a family with four affected members; grandmother, his son and two grand-sons having a germline gain-of-function mutation of KIT in exon 13 and discuss the imatinib mesylate treatment surveillance outcomes towards disease management.

Gastrointestinal stromal tumors (GISTs) are the most common mesenchymal tumors originating in the gastrointestinal tract. GISTs constitute 1%-3% of all malignant gastrointestinal tumors and the majority of cases are sporadic[1]. Familial GIST is an extremely rare autosomal dominant condition which is predominantly due to germline gain-of-function mutations of KIT and to a lesser extent of PDGFRA[2]. Diffuse proliferation of interstitial cells of Cajal (ICCs) in the myenteric plexus layer of the intestine has been described in patients with familial GISTs[3].

Surgery is the primary treatment for localized GISTs. Imatinib mesylate, which is a tyrosine kinase inhibitor, is administered as adjuvant therapy for high-risk groups after the operation or as neoadjuvant therapy for the management of advanced GISTs which are not candidates for surgery at initial diagnosis[13,14]. There are only a few reports describing the response to imatinib in familial GISTs confirming it as a promising therapeutic option[4,5,10].

We here describe clinical, imaging, pathological and genetic findings of a family with four affected members, grandmother, his son and two grand-sons having a germline gain-of-function mutation of KIT in exon 13 and discuss the imatinib treatment surveillance outcomes towards disease management.

We describe a family, father and two sons, with multiple GISTs. Grandmother was reported as being operated at the age of 62 and staged as advanced GIST. Genetic analysis was carried out on DNA obtained from peripheral blood samples from three affected individuals, and there was no DNA available from the grandmother (Figure 1). Sequence analysis of KIT gene (RefSeq ID: NM_000222.2; NP_000213.1) revealed a heterozygous exon 13 c.1924A>G (p.Lys642Glu; p.K642E) gain-of-function mutation in all three cases (Figure 2). This result was in concordance with the familial GIST diagnosis. 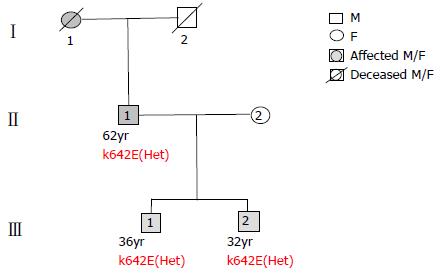 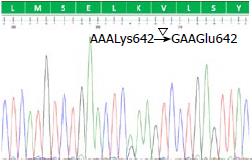 All three had been operated and found to have low risk, grade 1 multiple GISTs (T2N0M0). Immunohistochemical studies of the tumors showed strong positivity for CD117 (c-kit) (Figure 3). The father and older sibling were treated with imatinib for rest tumors after resection and showed a partial response to treatment.

Figure 3 Microscopic findings of gastrointestinal stromal tumor located in the proximal jejunum. Hematoxylin and Eosin staining revealed spindle cells in small bowel submucosa and wall (A). Immunohistochemistry for DOG1 (B) and c-KIT (C) showed immun activity in the tumor cell (original magnification: A, B and C, 40 ×).

The patient has been hospitalized due to massive GIS bleeding at the age of 20 and was operated at the age of 27 after an intensive rectal bleeding. Mesenteric angiography showed bleeding from proximal jejunal branches and tumoral staining. The bleeding branches embolized. Abdominal computed tomography (CT) revealed proximal jejunal wall thickening and nodular solid lesions with 2.5 cm in diameter. Laparoscopic jejunal resection was made and histopathological examination showed low risk grade 1 GIST with strong positivity for CD117(c-kit) (pT2N0M0). Postoperative follow-up PET-CT demonstrated normal findings. He was, thereafter, treated with imatinib (400 mg/d) for five years due to residual multiple, milimetric GISTs and annual follow-up PET-CT showed no recurrence during that period. Imatinib treatment was terminated upon patient’s request, end of five years treatment, in 2012. A recent follow-up PET-CT scan identified two nodular lesions in jejunum, 2 cm (SUVmax: 4.69) and 1.5 cm (SUVmax: 1.68) in diameters, which were consistent with GIST recurrence (Figure 4). Abdominal CT revealed multiple duodenal, jejunal and ileal contrast enhanced solid, nodular lesions with maximum 3 cm in diameter. The patient rejected the operation and preferred the re-treatment of imatinib (400 mg/d). A partial response was obtained again in the following 3 mo (Figure 5). The proband had multiple nevi on palms and soles which showed regression after the initiation of the treatment and had hypopigmentation of skin in general. 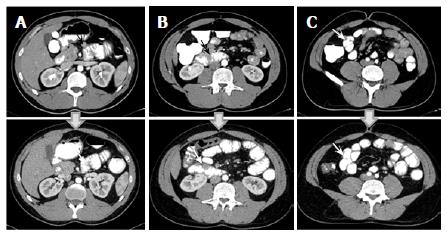 He was referred due to abdominal distension and dysphagia at the age of 32. Gastroduodenal endoscopic examination and endoscopic ultrasonography (EUS) showed a gastric submucosal 1.4 cm tumor in diameter on the small curvature of prepyloric antrum. Colonoscopy showed normal findings. 18F-FDG PET-CT revealed two lesions, one at the prepyloric antrum 1.5 cm in diameter with a SUVmax: 5.0 and another at jejunum 2.2 cm in diameter with a SUVmax: 5.39. Abdominal CT showed multiple solid, contrast enhanced mass lesions maximum 3.5 cm in diameter located at the jejunum in addition to the prepyloric antral mass. Partial jejunal resection, multiple wedge resection of stomach and jejunum was performed. Histopathological examination showed low risk grade 1, multifocal masses, two, in stomach at 2.5 cm in diameter and multiple in jejunum, more than 20 with a maximum diameter of 4 cm). Tumors showed strong positivity for CD117 (c-kit) (pT2N0M0). The patient opted for no adjuvant therapy and decided to be followed up by routine annual PET-CT.

The father had been treated for gastrointestinal bleeding at the age of 18 and preoperatively diagnosed as GIST at the age of 25. He had Billroth operation at the age of 28 and had bleeding episodes thereafter and is on imatinib for the past eight years. At the age of 53, abdominal CT revealed multiple solid lesions with heterogenous contrast enhancement at the distal duodenum, max 5.2 cm in diameter, proximal and middle jejunum, max 5.0 cm in diameter. Three similar solid lesions were further identified at the esophageal wall of the esophago-gastric junction level (2.0 cm in diameter), at the colonic wall of the splenic flexura level (1.2 cm in diameter) and of the rectosigmoid junction level (1.0 cm in diameter), respectively. There was no additional pathologic finding in the liver, peritoneal or retroperitoneal areas. Partial jejunal resection and multiple wedge resections from the esophagus, colon and rectum were performed. Histopathological examination showed low risk grade 1 multifocal GIST with strong positive CD117 (c-kit) (pT2N0M0). After the operation, the patient has been treated with imatinib (400 mg/d) for 8 years due to residual multiple, milimetric GISTs without recurrence on annual follow-up PET-CT.

We present an extremely rare condition of autosomal dominant familial GIST with heterozygous c.1924A>G (p.Lys642Glu; p.K642E) germline KIT mutation in exon 13 (K642E). All three patients had been operated and two of them were treated with imatinib due to residual multiple, milimetric GISTs to which they all showed partial response.

Surgery is the initial treatment for primary and localized GISTs, targeting complete resection with macroscopic and microscopic negative margins and functional preservation by wedge resection, whenever applicable. The management of a positive microscopic margin after macroscopic complete resection is not well defined, and options may include re-excision, watchful waiting, and adjuvant imatinib therapy. Imatinib mesylate is a first-line standard therapy for inoperable, metastatic, or recurrent GISTs. It is also indicated as adjuvant treatment for intermediate or high risk group of GISTs[14].

Only about half of the patients with sporadic GIST respond to imatinib treatment; 12%-14% show primary resistance to imatinib, and 40%-50% experience secondary resistance and disease progression within 2-3 years from the beginning of therapy[5]. With regard to familial GISTs, there are only 12 reports on the use of imatinib in 24 patients with KIT germline mutations[8,10,15-24].

The effect of imatinib on the inhibition of KIT activation is dependent on the site of the mutation within the KIT gene[5,25]. Previous studies described that the best responses were obtained in GISTs with exon 11 mutations with a daily dose of 400 mg while a daily double dose of 800 mg is required in cases with exon 9 mutation[5,26,27]. Clinical data on the effect of imatinib against sporadic GISTs with exon 13 mutations are limited. However, it has been proven that imatinib is effective in controlling the progression of sporadic GISTs in patients with K642E mutation. In vitro assays also showed that activation of K642E is inhibited by imatinib[26,27].

Several research and follow-up studies has shown that twelve exon 11 positive patients on 400 mg/d imatinib had stable outcome, lasting from 12 to 58 mo[10,19-21,23]. Three out of four exon 17 mutated patients[22,24], two out of three exon 13 mutated patients[8,10] and one exon 8 mutated patient[15] also reported to be stable after imatinib treatment initiation.

In our family, the father and the older son were treated with imatinib (400 mg/d) without recurrence. There were no signs of recurrence in the father. However, the older son showed recurrence four years after the cessation of imatinib treatment upon patient’s request. Imatinib was re-administered with a daily dose of 400 mg and CT scan showed a significant decrease in the tumor size, after three months of the treatment.

A family, a father (62-year-old) and two sons (32 and 36 years old) having multiple gastrointestinal stromal tumor (GIST) are described.

Massive GIS hemorrhage in the father and his older son, abdominal distension and dysphagia in the younger son.

Immunohistochemistry for DOG1 and c-kit showed immun activity in the tumor cell. Sequence analysis of KIT gene revealed a heterozygous exon 13 c.1924A>G gain-of-function mutation in all three cases in concordance with the familial GIST diagnosis.

Familial gastrointestinal stromal tumor (GIST) is a rare autosomal dominant disorder associated with mutations in the KIT gene in the majority of cases presents multiple GIST. Although surgery is the primary treatment for localized GISTs, imatinib mesylate is used as adjuvant or neoadjuvant therapy in high risk or advanced GIST groups.

We conclude that KIT mutation analysis is advisable prior to initiation of imatinib treatment in familial GIST, as it can help predicting the tumor response. We believe that case studies will contribute to our understanding the significance of mutation analysis in regard to the drug dosage, duration of treatment, drug response and follow-up studies of imatinib therapy in familial GISTs.

The authors describe three members of a family treated with surgery and imatinib due to a familiar GIST with a rare mutation. The role of imatinib in this rare familiar settings is not completely known so far. The paper is interesting, addresses a novel topic and adds further knowledge to literature.