Crouzon syndrome is a very rare autosomal dominant craniofacial dysostosis that occurs in approximately 16 in 1 million live births[1-3]. It was described in 1912 by a French neurologist, Octave Crouzon, in a mother and son exhibiting a triad of skull deformities, facial anomalies and exophthalmos[4]. Typically Crouzon syndrome has been associated with bicoronal synostosis leading to a characteristic tall, flattened forehead. Midface hypoplasia, a beaked nose, and proptosis have also been described as characteristic features[5,6].

To the best of our knowledge, there have been no cases of Crouzon syndrome associated with isolated bilateral squamosal suture craniosynostosis described in the literature. We report the radiological appearance of bilateral premature squamosal craniosynostosis found in a 13 mo-old female with Crouzon syndrome during her work up for skull deformity.

The patient was a 13 mo-old female who was born at 37 wk gestation and had a normal neonatal course. The patient’s father carried a diagnosis of Crouzon syndrome. Her family history was otherwise unremarkable. Her past surgical history includes bilateral tear duct probing for bilateral nasolacrimal obstruction. On physical exam, the patient was noted to have macrocephaly (> 97% percentile for age) associated with a prominent forehead and relatively narrowed temples, proptosis, low set ears, orbital hypertelorism and the right cheek was higher and fuller than the left cheek. Given the family history of Crouzon syndrome and the patient’s dysmorphic features, Crouzon syndrome was suspected. Genetic testing was done to confirm diagnosis and a mutation in the FGFR2 gene was noted. The patient was then referred to our radiology department to have a head CT performed to rule out craniosynostosis.

CT of the head without intravenous contrast was performed in our institution for further evaluation using the following technique: GE Medical Systems, Pitch: 0.625:1, Pixel spacing: 0.400 mm/0.400 mm, Kvp 120, mA 109, rotate time: 0.8, ST 3.75 mm, FOV 20 cm, Tilt 0, W: 90, L: 40. Two dimensional images (2D) in the sagittal and coronal planes were reformatted at ST of 3 mm as well as three dimensional images of the skull (3D). The 3D images demonstrate normal appearance of the bilateral coronal and lambdoid sutures and normal appearance of the sagittal suture (Figure 1A). The metopic suture is not visualized, having normally fused. However, there is premature fusion of the squamosal sutures bilaterally (Figure 1B). Coronal 2D reformatted image (Figure 2) shows the local thumb printing (beaten copper) appearance of the inner cortex in the region of bilateral squamosal suture fusion. 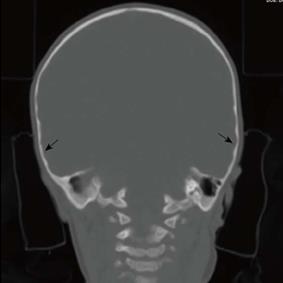 The correction of the craniofacial deformities in a patient with Crouzon syndrome and bilateral squamosal craniosynostosis is accomplished through a series of operations over time with respect to the growth and development of the craniofacial skeleton. Around the first year of age, the patient will undergo subtotal cranial vault remodeling to release the fused sutures and correct the skull shape deformities. Subsequently, at around 7 years of age, the patient will be scheduled to undergo either a facial bipartition or Lefort III advancement to correct the hypertelorism or midface hypoplasia. At skeletal maturity, the patient will undergo orthognatic surgery to correct malocclusion when necessary.

The development of the human calvaria is a complex process that is still not completely understood. There are 5 primary ossification centers which meet to form 6 main sutures. When this process occurs normally, it culminates to a normally shaped adult head[7].

Craniosynostosis is a pathologic condition which is characterized by the premature fusion of cranial sutures which results in deformity of the vault and cranial base and is often associated with neurological sequelae secondary to alteration in cranial volume and restriction in brain growth. It may occur alone or in association with other anomalies making up various syndromes[8].

Among the craniosynostosis that are attributed to genetics, most have been associated with a mutation involving 1 of 3 fibroblast growth factor receptors (FGFRs) which include FGFR1, FGFR2, or FGFR3[11]. In the majority of cases, Crouzon syndrome is caused by mutations in the fibroblast growth factor 2 (FGFR2) gene on chromosome 10q26[1,12,13]. However, in patients with Crouzon syndrome and acanthosis nigricans, FGFR3 mutations have also been identified[14]. FGFR gene family mutations have also been found in patients with other syndromic craniosynostosis including Pfeiffer syndrome, Jackson-Weiss syndrome, Apert, and Saethre-Chotzen’s syndromes[15,16].

The gold standard imaging modality in diagnosing craniosynostosis is CT scan with 3D surface-rendered reconstruction[20]. MRI has no significant role in the diagnosis of craniosynostosis or facial anomalies associated with Crouzon syndrome as it has poor details to bones. MRI of the brain may be indicated in the future only if patient develops neurologic symptoms.

The sagittal suture is most commonly affected in non syndromic craniosynostosis and is estimated to be affected in 40%-60% of cases[21]. This is followed by the coronal suture that is affected in 20%-30% of the cases and the metopic suture in less than 10% of the cases[21]. The pattern of suture involvement determines the shape of the skull defect[21]. There have been more than 100 different types of syndromes which have been identified to be associated with craniosynostosis[9,10].

The treatment of craniosynostosis syndromes requires a multidisciplinary team including plastic surgeons, pediatricians, ENT specialist, radiologists, neurosurgeons, and clinical genetic specialist[23,24]. Surgical correction is undertaken to correct craniofacial deformities and functional problems such as elevated intracranial pressure, airway obstruction, ocular exposure and malocclusion. Surgical techniques that are commonly utilized include fronto-orbital advancement or cranial vault remodeling in first year of life to correct craniosynostosis[25]. Hypertelorism is usually corrected with facial bipartition at age 7. Distraction osteogenesis is commonly used with midface osteotomies to correct midface hypoplasia as it has multiple advantages over conventional mid-facial advancement such as the monobloc or LeFort III. Distraction techniques have been shown to reduce operating time, reduce blood loss, reduce infection, eliminate need of bone graft, and allow for large advancement of the midface. Class III malocclusion which is commonly seen in syndromic craniosynostosis patients is corrected at skeletal maturity with a Lefort I advancement or double jaw surgery[26-32].

In a conclusion, although squamosal suture craniosynostosis is an extremely rare entity, especially when associated with Crouzon syndrome, it is extremely important for the radiologist to be familiar with its radiological appearance in order to prevent misdiagnosis and delayed treatment.

The patient was noted to have macrocephaly associated with a prominent forehead and relatively narrowed temples, proptosis, low set ears, orbital hypertelorism and asymmetry in appearance of the cheeks.

Mutation in the FGFR2 gene was noted.

The treatment of craniosynostosis syndromes requires a multidisciplinary team including plastic surgeons, pediatricians, ENT specialists, radiologists, neurosurgeons, and clinical genetic specialists. A series of corrective operations will be performed over time.

This is a simple case report on a young patient with Crouzon syndrome. It is concise, well written and well illustrated.