Spontaneous pneumomediastinum (SPM) is described as free air or gas located within the mediastinum that is not associated with any noticeable cause such as chest trauma. SPM has been associated with many conditions and triggers, including bronchial asthma, diabetic ketoacidosis, forceful straining during exercise, inhalation of drugs, as well as other activities associated with the Valsalva maneuver. The Macklin effect appears on thoracic computed tomography (CT) as linear collections of air contiguous to the bronchovascular sheaths. With the recent availability of multidetector-row CT, the Macklin effect has been seen in the clinical setting more frequently than expected. The aim of this review article is to describe the CT imaging spectrum of the Macklin effect in patients with SPM, focusing on the common appearance of the Macklin effect, pneumorrhachis, and persistent SPM with pneumatocele.

Core tip: The Macklin effect can be frequently seen on imaging by multidetector-row computed tomography (CT) of patients who are found to have spontaneous pneumomediastinum from respiratory causes other than chest trauma. The collections of air dissect along the bronchovascular sheaths to the hilum and into the mediastinum. The Macklin effect as seen on CT may help differentiate respiratory from other etiologies of pneumomediastinum.

Pneumomediastinum is described as free air or gas located within the mediastinum. It can be precipitated by various triggers that are either intrathoracic, such as stenosis or blockage of an airway, Valsalva maneuver, blunt trauma to the chest, or ruptured alveoli; or extrathoracic, such as fractured sinus, iatrogenic manipulation during tooth extraction, or ruptured intestine[1].

Spontaneous pneumomediastinum (SPM) is described as free air or gas located within the mediastinum that is not associated with any noticeable cause such as chest trauma. The first case series of SPM was reported by Hamman[2] in 1939; therefore, the condition is called Hamman syndrome[3]. Respiratory pneumomediastinum is a result of rupture along the alveolar tree, which leads to an abrupt increase in the intra-alveolar pressure. Released alveolar air centripetally dissects through the pulmonary interstitium along the bronchovascular sheaths toward the pulmonary hila, into the mediastinum[3]. This pathophysiological mechanism was described by Macklin et al[4] in 1944, and is known as the Macklin effect.

SPM is usually a benign, self-limiting illness affecting young males. However, it is a condition that is not widely recognized by clinicians. There have been several reports describing the appearance of the Macklin effect on computed tomography (CT) images of patients with SPM[5-12]. This review article will describe the CT imaging spectrum of the Macklin effect as observed in patients with SPM.

THE MAIN CAUSES OF SPM

SPM occurs predominantly in young males[13,14], and is an uncommon entity. The prevalence of SPM reportedly ranges from 1 of 8005 to 1 of 42000 hospital accidents and emergency admissions[13,15]. Three different mechanisms can produce pneumomediastinum: (1) disruption of a cutaneous or mucosal barrier (usually the tracheobronchial tree or the esophagus), which allows the entry of gas into the mediastinum; (2) gas produced by organisms in the mediastinum or adjacent chest; or (3) rupture of an alveolus. Alveolar rupture is known as SPM[14,16]. SPM has been associated with many conditions and triggers, such as bronchial asthma[17], diabetic ketoacidosis[18], forceful straining during exercise[19], inhalation of drugs[20], childbirth[21], severe cough or vomiting[22], and other activities associated with the Valsalva maneuver[23]. Recent case reports have shown that SPM has also occurred in patients with gastroesophageal reflux disease[24], anorexia nervosa[25], in individuals swallowing a foreign body such as a peach seed or pork rib[26], and in a patient who practiced yoga[27].

Although pneumomediastinum can be spontaneous, without known precipitating events and without injury to mediastinal organs, pneumomediastinum can be an ominous sign of injury to mediastinal structures, including ruptured esophagus (Boerhaave syndrome) or ruptured trachea (Figure 1). Whenever pneumomediastinum is identified on imaging studies, the problem is differentiating those patients with mediastinal organ injuries from patients without organ injuries. The former require admission, diagnostic studies, and surgical treatment, while the latter can simply be observed, thereby avoiding unnecessary admissions and diagnostic tests[28]. 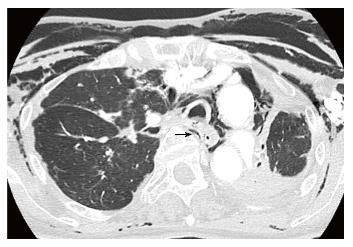 Figure 1 Chest computed tomography scan of an 82-year-old woman shows an injury to the posterior wall of the trachea, massive pneumomediastinum, and subcutaneous emphysema due to ruptured pars membranosa (arrow).

SPM is uncommon in children. However, because of the increasing concern regarding the risks to children exposed to radiation, Chapdelaine et al[29] studied whether the extensive radiologic workup of SPM affects its management and outcome. Of 53 cases of SPM, 26 (49%) were related to bronchospasm, 11 (21%) were associated with respiratory infections, and 8 (15%) were of unknown etiology. Inhaled foreign bodies were associated with 4 cases. No esophageal perforations were identified. Posteroanterior chest x-ray (CXR) diagnosed every case except 1, and the mean number of CXRs performed during hospitalization was 3. Only 3 patients developed subsequent pneumothorax, and no patient needed pleural drainage. Of the 8 patients with SPM of unknown etiology, 5 underwent barium swallow and 2 underwent chest CT, and all findings were within normal limits. The authors concluded that SPM is usually self limited, and the prognosis depends on the underlying disorder. Therefore, for patients with clinical improvement, an aggressive work up and follow-up chest imaging are rarely justified.

CT DEMONSTRATION OF THE MACKLIN EFFECTS IN SPM

Macklin and Macklin first observed that released alveolar air from alveolar rupture centripetally dissects through the pulmonary interstitium along the bronchovascular sheaths toward the pulmonary hila and into the mediastinum[4]. Wintermark and Schnyder recently reported that the rate of Macklin effect seen on chest CTs of patients with blunt trauma to the chest was 39%. They concluded that CT-associated Macklin effect was a sign of severe blunt trauma to the chest[30]. However, there have been several reports of the Macklin effect on the CT scans of patients with SPM[5-12].

As demonstrated in Figures 2-5, the Macklin effect appears on thoracic computed tomography (CT) as linear collections of air contiguous to the bronchovascular sheaths[5-12]. The air dissects into the pulmonary hila and from there enters the mediastinum. We previously reported that using multidetector-row (MD)CT, we detected the Macklin effect in 8 of 9 patients with nontraumatic pneumomediastinum , which was a higher rate of detection than had been previously reported[5]. Sakai et al[6] also reported a high detection rate of the Macklin effect using 64-detector-row CT. They found interstitial gas in the perihilar region of all 20 of their patients. We speculated that the increased detection rate of the Macklin effect was a result of using MDCT with application of thin collimation, a one-breath-hold technique, and visualization of magnified images on a monitor with cathode ray tubes. These factors might facilitate the identification of subtle Macklin effects. Therefore, we may conclude that alveolar rupture described as the Macklin effect is even frequently seen in patients with SPM.

Figure 2 A 21-year-old woman with hypothyroidism and symptoms of cervical discomfort and tenderness. Multidetector-row computed tomography scan demonstrates air collection along the perivascular connective tissue, the Macklin effect (arrows), in the peripheral area (A) and in the perihilar area (B), and pneumomediastinum. Reprinted from ref. [5]. 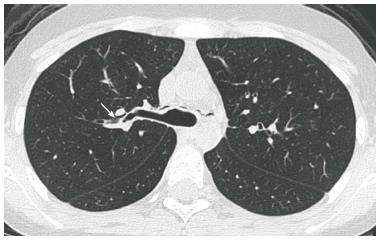 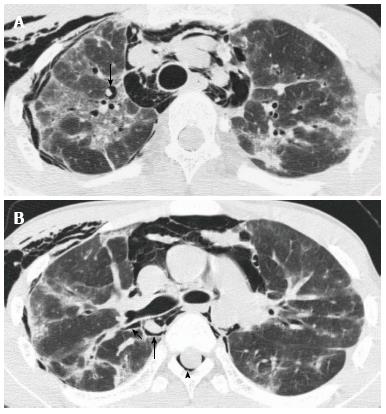 Figure 4 A 15-year-old girl with cryptogenic organizing pneumonia associated with graft-vs-host disease. Multidetector-row computed tomography scan demonstrates air collection along the perivascular connective tissue, the Macklin effect (arrows) in the peripheral area (A) and in the perihilar area (B), and massive pneumomediastinum. This patient also has spinal pneumorrhachis (arrowhead). Reprinted from ref. [5]. 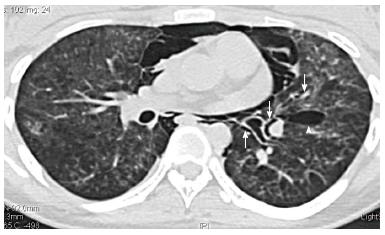 CXRs are generally useful for diagnosing pneumomediastinum, although there have been false-negative results. For false-negative cases, Okada et al[7] concluded that because of thin slices obtained on CT, CT is more effective than CXR alone for diagnosing pneumomediastinum. Sixty-four-detector-row CT reveals minute changes in organs and peripheral tissues. However, the Macklin effect was not detected in the peripheral lung of 4 of our reported 12 cases[5] and in 11 of 20 cases in Sakai’s report[6]. We believe that since the Macklin effect develops as linear collections of air in the pulmonary interstitium that extend along the bronchi and contiguous blood vessels to gradually reach the perihilar bronchovascular sheath, the longer that time passes after its onset, the less often it is seen in the periphery of CT scans (Figure 3).

SPM is occasionally associated with pneumorrhachis, the presence of air within the spinal epidural space (Figure 4). A literature review of 48 patients with pneumorrhachis revealed that only 1 case had neurologic symptoms and signs; the other cases were successfully managed conservatively[31]. This literature review described a 72-year-old man with progressive motor weakness and sensory deficits in the lower extremities, who had a large accumulation of intraspinal air. He recovered completely after a C7 laminectomy. Kono et al[32] reported pneumorrhachis in 4 of 42 children with SPM, and the patients with pneumorrhachis did not have neurological symptoms. Therefore, in SPM, a collection of air within the spinal canal is mostly self limiting and benign. Pneumomediastinum concomitant with pneumoperitoneum is very rare in SPM, with only a few cases reported. It also appears to resolve with conservative treatment, without intervention[33,34].

Although the Macklin effect appears on thoracic CT as linear collections of air contiguous to the bronchovascular sheaths, the onset, which is alveolar rupture, is rarely observed on CT. The released alveolar air rapidly dissects into the pulmonary hila and from there enters the mediastinum. We did have an SPM patient with a pneumatocele (Figure 5). This young female patient had interstitial pneumonia with prolonged SPM and cervical subcutaneous air. Patients found to have a Macklin effect involving peribronchovascular air and pneumatocele[35] will have a prolonged SPM, and clinical intervention is required.

The Macklin effect can be frequently observed on the MDCT images of patients with SPM not associated with trauma. A Macklin effect seen on CT may help differentiate respiratory from other etiologies of pneumomediastinum. However, especially in pediatric patients with SPM who improve clinically, aggressive investigation and follow-up CXRs are rarely warranted, and the efficacy of CT is limited.