We report on two cases of patients with fat-equivalent masses in computed tomography (CT), referred to our department for dynamic positron emission tomography/CT (dPET/CT) with 18F-fluorodeoxyglucose (18F-FDG) in order to investigate their dignity. Both qualitative and quantitative information, as derived from dPET/CTs, couldn’t exclude a high-grade liposarcoma: Visual evaluation, revealed a large hypermetabolic focus of intense 18F-FDG uptake in each patient (average SUVs 8.3 and 11.3). Regression-based parametric imaging demonstrated an enhanced distribution volume, which correlates to perfusion, and a high phosphorylation rate that correlates to cell viability. Kinetic analysis, based on a two-tissue compartment model demonstrated an enhanced FDG transport k1 and an enhanced phosphorylation rate k3. A non-compartmental approach based on fractal dimension revealed also enhanced values. However, final diagnosis was based on biopsy, which revealed hibernoma, a benign brown fat tumor. Brown adipose contains increased numbers of mitochondria and a high-rate of glucose metabolism. Therefore, they have increased FDG uptake. The evaluation of lipomatous lesions on CT, with high FDG uptake, should include the possibility of hibernoma as a differential diagnosis.

Core tip: We report on two cases of patients with fat-equivalent masses in computed tomography (CT), referred to our department for dynamic positron emission tomography/CT (dPET/CT) with 18F-fluorodeoxyglucose (18F-FDG) in order to investigate their dignity. Both qualitative and quantitative information, as derived from dPET/CTs, couldn’t exclude a high-grade liposarcoma. The evaluation of lipomatous lesions on CT, with high FDG uptake, should include the possibility of hibernoma as a differential diagnosis.

Hibernomas are benign soft tissue tumors arising from brown adipose tissue. Their pathogenesis is unknown and they give no symptoms. They are distinctly rare accounting for 1.6% of benign lipomatous tumors and approximately 1.1% of all adipocytic tumors[1]. Their peak incidence is in the third and fourth decades of life. Hibernomas are usually found in sites where brown fat persists beyond fetal life e.g., shoulder, neck, retroperitoneum, back, thorax. As neither malignant transformation nor recurrence is expected, complete surgical resection is the treatment of choice[1,2]. The evaluation of hibernomas is a diagnostic challenge not only because of the rarity of the disease, but also because they are asymptomatic and present with atypical, non-specific imaging findings. Herein, we report on two cases of patients with fat-equivalent masses in computed tomography (CT) referred to our department for dynamic positron emission tomography/CT (dPET/CT) with 18F-fluorodeoxyglucose (18F-FDG). The main indication for their referral was the investigation of their metabolism and, more specifically, the differential diagnosis between lipomas and liposarcomas.

Two female patients (35 and 46 years old) were referred to our department from the surgical clinic for 18F-FDG dPET/CT. These, otherwise healthy, patients demonstrated well-circumscribed fat-equivalent masses in CT in the anatomical areas of the retroperitoneum (7.8 cm × 10.2 cm × 17 cm) and the left upper arm (7 cm × 3 cm × 10 cm) respectively (Figure 1). The patients had also already gone through magnetic resonance imaging (MRI) that demonstrated a slight enhancement of contrast material without infiltration of the surrounding tissues; therefore, liposarcomas could not be excluded. The main indication for the referral of the patients for PET/CT was the metabolic/functional characterization of these masses, so that further information regarding their dignity would be derived. Moreover, whole body evaluation for potential metastases before treatment was another indication for the PET/CT scan.

The patients underwent dPET/CT after bolus application of 18F-FDG. Evaluation of dPET/CTs was based on visual qualitative assessment of the fused PET/CT images, SUV calculation, parametric imaging, and absolute quantitative evaluation after application of a two-tissue compartment model and a non-compartment analysis. PET/CT images of the patients demonstrated two large hypermetabolic foci in the right retroperitoneum and the left medial part of the left upper arm (Figure 1). The average SUVs of these masses were 8.3 and 7.7, while their maximum SUVs were 11.3 and 13.5 respectively. 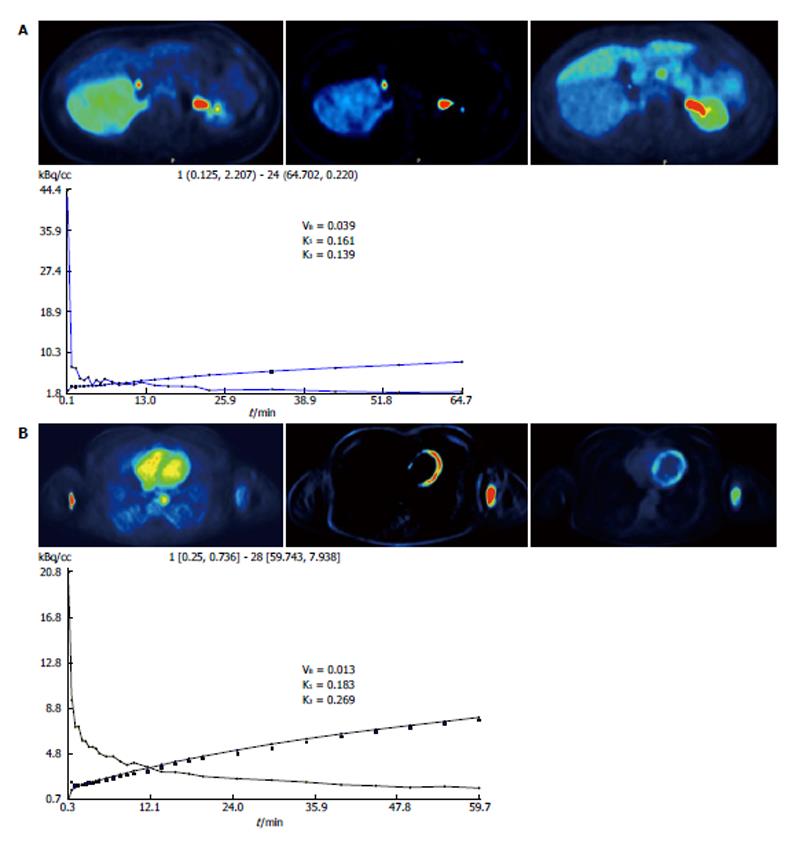 The application of a two-tissue compartment model led to the extraction of 18F-FDG kinetic parameters that had high values. In particular, the parameter k1, an indicator of intracellular FDG transport, had the values of 0.161 and 0.183 in the two tumors, while the indice k3, which is a parameter of phosphorylation rate, was 0.139 and 0.269 respectively (Figure 2). A non-compartmental approach was also performed resulting in the acquisition of fractal dimension (FD), a parameter of tissue heterogeneity[4]. This analysis also revealed high FD values for the two patients (1.265 and 1.358 respectively).

Both qualitative and quantitative evaluation of dPET/CT studies revealed two tumors of highly active metabolism and perfusion. The features of these tumors led to the exclusion of lipomas as a potential diagnosis, rendering higher the possibility of high grade liposarcomas. Although, their characteristics were not typical of this entity, since liposarcomas don’t present with so intense characteristics in dPET/CT according to our experience, it was not possible to exclude a liposarcoma based on the PET data exclusively[5].

Final diagnosis was based on CT-guided biopsy, which revealed a hibernoma. The patients were treated with complete surgical resection of their tumors.

Hibernomas are benign, asymptomatic brown fat tumors with no malignant potential. They usually occur in the third to fourth decade of life, earlier than other soft tissue tumors. Macroscopically, they are well defined, encapsulated, hypervascular and soft, while their color ranges from tan to red brown, depending on the amount of intracellular lipids[6]. From a microscopical perspective, the tumor is characterized by the “hibernoma cells”. These are large multivacuolated fat cells with eccentric nuclei, no/rare atypia and a small single round central nucleolus. There have been recognized four histologic variants of hibernomas: typical, myxoid, lipoma-like, and spindle cell hibernoma, all of them with a benign course[1]. Lipomas, the most common soft tissue tumors, typically occur in the fifth to sixth decade. Macroscopically, they are well-circumscribed masses, usually encapsulated, with a distinct lobular pattern. They have a pale yellow to tan color, with a lobular to smooth and variably greasy to myxoid cut surface. Microscopically, the mass consists of uniform in size and shape mature fat cells (adipocytes), while fat necrosis and other inflammatory changes may be seen when lipomas are traumatised[7]. Liposarcomas, on the other hand are the second most common soft tissue sarcomas following malignant fibrous histiocytomas[8]. They are typically deep seated and tend to affect adults between the ages of 40 and 60. The histologic spectrum of liposarcomas is very wide which is also reflected in the tumor’s imaging. Liposarcomas are classified into four main groups: well differentiated (low grade; most common subtype), dedifferentiated (low grade), myxoid (intermediate grade) and pleomorphic liposarcomas (high grade)[9].

Since hibernomas are typically slow growing and asymptomatic, their early diagnosis is difficult. Differential diagnosis is not simple and includes lipoma, liposarcoma, rhabdomyosarcoma, resolving hematoma, and giant cell tumor; in the pediatric population, one should consider rhabdomyosarcoma and lymphoma. Therefore, imaging modalities are crucial in tumor detection and characterization. Among anatomical imaging modalities, CT and MRI play the most important role. CT depicts hibernoma as a well-defined mass with signal intensity intermediate between subcutaneous fat and muscle, which enhances variably after contrast injection[6]. MRI also shows the well-circumscribed mass, which, on T1- and T2-weighted images demonstrates high signal intensity but slightly less than that of the subcutaneous fat[10]. Although these radiologic findings help in differentiation and exclusion of some other tumor types, they are not hibernoma-specific. Lipomas appear on CT identical to subcutaneous fat demonstrating a homogeneous low attenuation, and no enhancement after administration of intravenous contrast. Similarly, on MRI signal intensity of a lipoma is identical to that of the subcutaneous adipose tissue on all pulse sequence. Regarding liposarcoma, its appearance on CT and MRI reflects the degree of tumor differentiation; the more differentiated the tumor, the more it resembles adipose fat tissue. Well-differentiated liposarcomas present as predominantly fat masses (at least 75% adipose tissue) with septa of variable thickness and shape. The other histologic subtypes of liposarcoma appear radiologically as tumors that typically contain less fat with significant amounts of soft-tissue, thus resulting in inhomogeneous CT and signal intensity (MRI)[11,12].

Despite their benign nature, many studies have shown that hibernomas demonstrate increased 18F-FDG uptake in PET[13-15]. Moreover, the intense 18F-FDG uptake observed in hibernomas has been proposed as a very meaningful technique to differentiate these tumors from liposarcomas[16]. In clinical oncological practice, increased FDG uptake raises the concern of a suspected mass to be malignant. However, 18F-FDG is not a specific tumor tracer; any cause of increased glucose consumption can lead to enhanced FDG uptake. Brown fat uptake is a known, well-documented, normal variant of FDG uptake[17]. Brown adipose tissue contains increased numbers of mitochondria and a high rate of glucose metabolism. Therefore, brown fat cells have increased FDG uptake because of their high level of glucose metabolism rather than from tumor growth activity. This explains the intense FDG uptake of hibernomas, despite their lack of malignant potential. Except 18F-FDG, other PET radiotracers have also been studied in soft tissue sarcomas; our group has evaluated the behavior of carbon-11-labeled aminoisobutyric acid and oxygen-15-labeled water (15O-labeled water) in eleven histopathologically confirmed soft tissue sarcoma patients. Both radiotracers showed an increased activity in viable tumor with a significant differentiation from normal tissue, however the results were not tumor-specific[18].

In our cases, two well-circumscribed, fat-equivalent on CT masses were detected in two female patients of 35 and 46 years old. Both masses demonstrated very high FDG uptake on dPET/CT, with SUVs significantly higher than even SUVs detected in sarcomas[5]. Moreover, their parametric (intercept, slope) images were positive, indicating both enhanced perfusion and phosphorylation. The application of two-tissue compartment analysis and non-compartmental modeling also demonstrated high values (k1, k3, FD), rendering malignancy (high grade liposarcoma in our cases) a more possible diagnosis than a benign tumor (lipoma)[5,19]. However, despite all these malignancy-indicating qualitative and quantitative PET/CT findings, histopathology proved that both masses were benign and were characterized as hibernomas. Therapists moved on with complete tumor excision.

Hibernomas may be a diagnostic challenge based on the imaging findings, since they mimic often malignant lesions. The evaluation of lipomatous lesions on CT, with high FDG uptake, should include the possibility of hibernoma as a differential diagnosis.

We describe two cases of lipomatous tumors in two otherwise asymptomatic patients, eventually found out to suffer from hibernomas.

No specific tumor marker or other biochemical index is specifically raised in the tumor.

Dynamic PET/CT (dPET/CT) is an imaging modality that (in contrary to “classical” whole body PET/CT protocols) is based on dynamic scanning of the patient after bolus iv injection of a radiotracer. In addition to the standard diagnostic information acquired from static whole-body PET/CT studies, dPET/CT allows absolute quantitative data acquisition, based on compartment and non-compartment modeling, and furthermore renders possible the calculation of parametric images.

In masses that appear as fat-equivalent on CT and also demonstrate enhanced FDG uptake on PET, the diagnosis of hibernoma should be considered.

The authors first published dynamic PET/CT study in the rare tumor hibernoma. The semi-quantitative data (after SUV calculations), the absolute quantitative data (after application of two-tissue compartment modeling and non-compartment modeling) and parametric images that our group presents, are the first published for hibernomas.