AIM: To assess the feasibility of performing acoustic radiation force impulse (ARFI) elastography in patients with ascites and its predictive value for the cirrhotic or non-cirrhotic etiology of ascites. METHODS: Our study included 153 patients with ascites, mean age 58.8 ± 13.1 years. One hundred and fifteen (75.2%) patients had ascites in the context of cirrhosis, 29 (18.9%) had non-cirrhotic ascites (diagnosed by clinical, ultrasound, endoscopic and/or laparoscopic criteria) and in 9 (5.9%) cases we could not establish the etiology of ascites. We performed 10 ARFI measurements and the median value was calculated and expressed in meters/second (m/s). Among the 29 patients with non-cirrhotic ascites were included: 20 laparoscopically demonstrated peritoneal carcinomatosis with histological confirmation, 7 acute pancreatitis with ascites which later resolved, and one case each of lymphatic ascites and ascites in the context of a liver abscess. In 11 of the 20 patients with peritoneal carcinomatosis, the liver structure was homogenous in the ultrasound examination and in 9 patients the ultrasound exam revealed liver metastases. RESULTS: We could not obtain valid ARFI measurements in 5 patients (3.2%). The mean liver stiffness measurements by means of ARFI were statistically significantly higher in patients with cirrhotic ascites than in those with non-cirrhotic ascites: 3.04 ± 0.70 vs 1.45 ± 0.59 m/s (P < 0.001). For a cut-off value of 1.8 m/s for predicting cirrhosis (and ascites in the context of cirrhosis), as obtained in a previous study, ARFI had 98.1% sensitivity, 86.2% specificity, 96.4% positive predictive value, 92.5% negative predictive value and 95.6% accuracy for predicting cirrhotic ascites. For a cut-off value of 1.9 m/s the accuracy was 94.9% and for a 2 m/s cut-off value it was 92.8%. CONCLUSION: ARFI elastography is feasible in most patients with ascites and has a very good predictive value for the cirrhotic or non-cirrhotic etiology of ascites.

Ascites is a fluid accumulation in the peritoneal cavity. Mild ascites is hard to notice by clinical exam, but severe ascites leads to abdominal distension. Patients with ascites generally will complain of progressive abdominal heaviness and pressure, as well as shortness of breath due to mechanical impingement on the diaphragm. The International Club of Ascites classified ascites as follows: grade 1 (mild, visible only on ultrasound); grade 2 (detectable with flank bulging and shifting dullness); and grade 3 (directly visible, confirmed with fluid thrill)[1].

Acoustic radiation force impulse (ARFI) elastography is a new method used for the assessment of liver fibrosis, thyroid gland nodules, breast nodules, liver and kidney tumors[4-10]. The principle of ultrasound elastography is that compression of the examined tissue induces a smaller strain in hard tissues than in soft ones. The ultrasound probe automatically produces an acoustic “push” pulse that generates shear-waves which propagate into the tissue. Their speed, measured in meters/second (m/s), is displayed on the screen. The propagation speed increases with fibrosis severity. Using image-based localization and a proprietary implementation of ARFI technology, shear wave speed may be quantified in a precise anatomical region, focused on a region of interest, with a predefined size provided by the system. Measurement value and depth are also reported and the results of the elasticity are in m/s[11-13].

We included in our study 153 consecutive patients, mean age 58.8 ± 13.1 years, 61 women and 92 men. In each patient we measured the liver stiffness (LS) by means of ARFI in the right liver lobe, 1 cm below the liver capsule, by intercostal approach, with the patient laying in left lateral decubitus (Figure 1). ARFI measurements were performed with a Siemens Acuson S2000™ ultrasound system. In each patient, 10 valid ARFI measurements were performed and the median values were calculated, the results being expressed in meters/second (m/s). The investigator performed ARFI measurements blinded to the patient’s clinical and biochemical data. 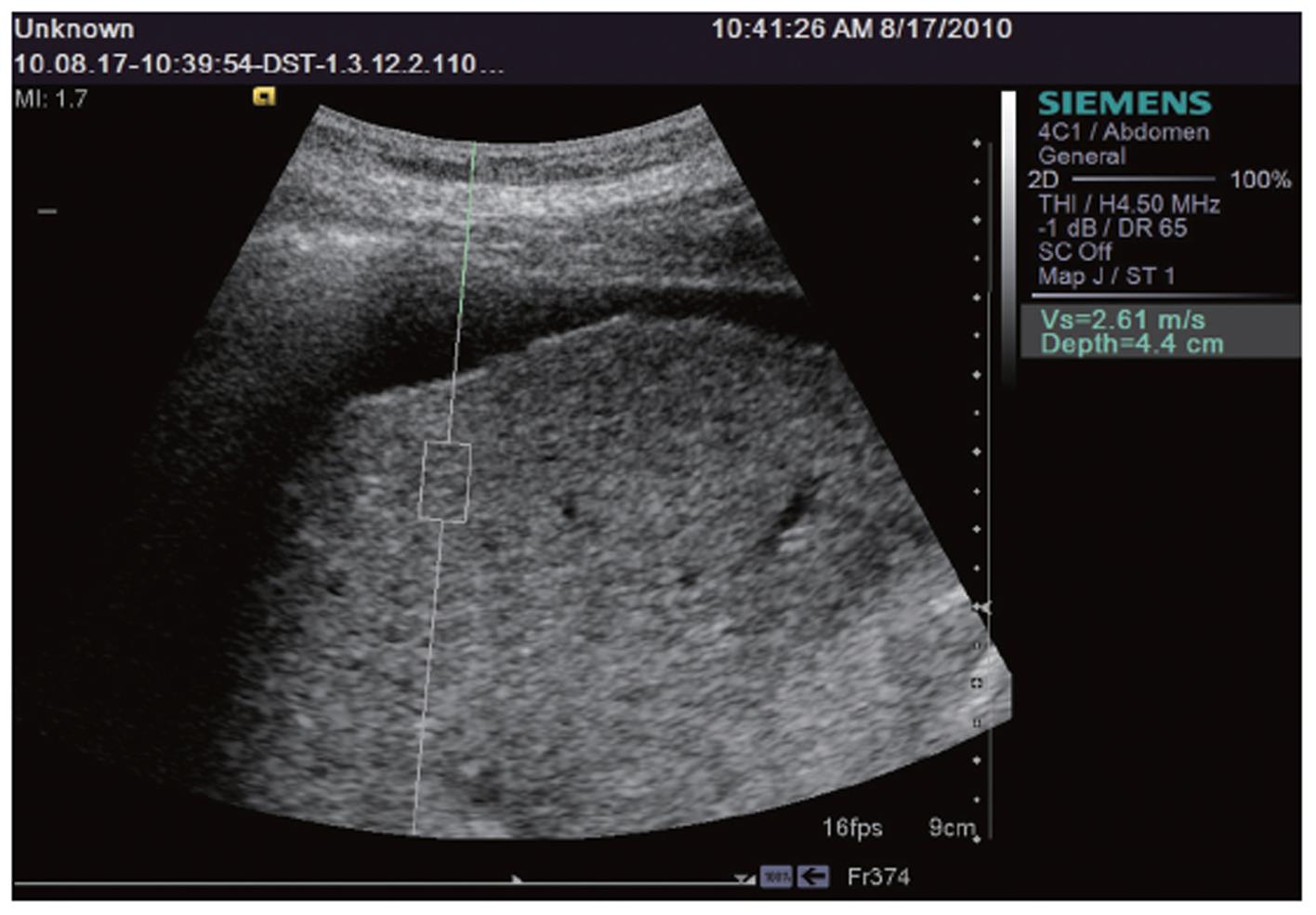 Our study included 115 patients (75.2%) with ascites caused by liver cirrhosis (diagnosed by clinical, ultrasound, endoscopic and/or laparoscopic criteria), 29 patients (18.9%) with non-cirrhotic ascites (20 laparoscopically demonstrated peritoneal carcinomatosis with histological confirmation, 7 acute pancreatitis with ascites which later resolved and one case each of lymphatic ascites and ascites in the context of a liver abscess) and 9 patients (5.9%) in whom we could not establish the etiology of ascites (the patients refused the laparoscopy). All the patients signed the informed consent and the study was approved ethically by the Emergency County Hospital Timisoara.

Data obtained from our patients were collected in a Microsoft Excel file, the statistical analysis being performed using the MedCalc program and WINK Statistical Data Analysis Research Software. ARFI measurements were numeric variables, so the mean values and standard deviation were calculated. The 2-way ANOVA test and t test were used to compare mean ARFI values of LS. 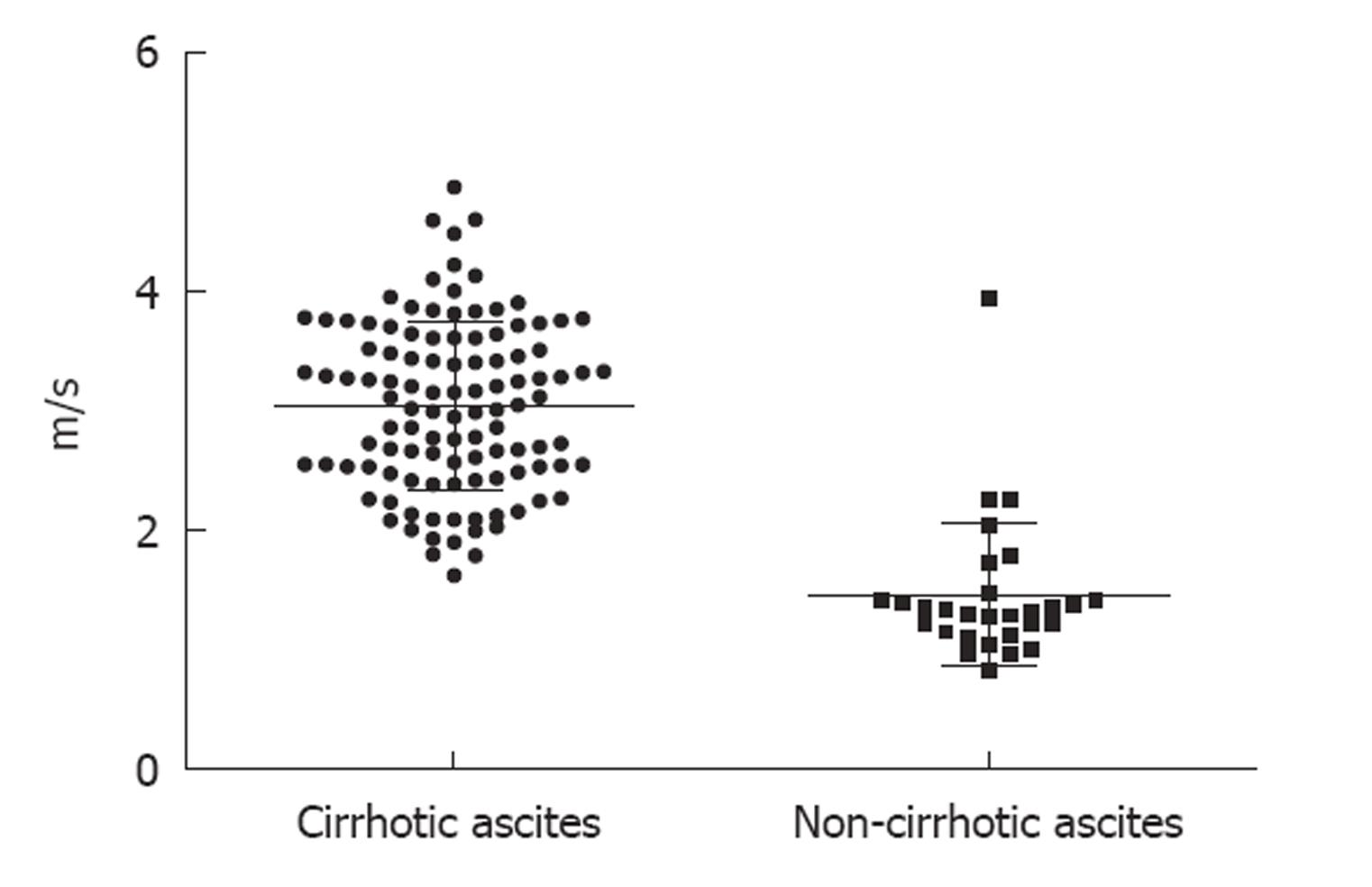 Figure 2 Distribution of liver stiffness values in patients with cirrhotic and non-cirrhotic ascites.

For a cut-off value of 1.8 m/s for predicting cirrhosis (and ascites in the context of liver cirrhosis), which is a figure resulting from our previous studies[8,9], ARFI had very good predictive value for the cirrhotic etiology of the ascites (Table 2). If the cut-off value was set at 1.9 and 2 m/s, the predictive value was also very good (Table 2).

Standard ultrasonography can be a useful tool for the etiological diagnosis of ascites syndrome. For instance, the surface of the liver is irregular in liver cirrhosis and regular in most other causes of ascites. In cirrhosis we can also find an enlarged spleen, a large portal vein, a thickened wall of the gallbladder with bowel loops freely floating within the ascitic fluid. If the peritoneal fluid is an exudate we can find small amorphous echoes within the fluid (“debris”), loculated fluid, matted bowel loops, hepatic metastases[14,15]. However, the differentiation between benign and malignant ascites by means of ultrasound is frequently difficult or impossible.

ARFI elastography is a new method used for the assessment of LS. Unlike transient elastography (TE) (FibroScan, EchoSens-Paris, France), this new technique can additionally be performed in patients with ascites.

Of the 4 patients with non-cirrhotic ascites incorrectly classified for a 1.8 m/s cutoff value, in 2 cases ARFI was difficult to determine (10 valid ARFI measurements and more than 7 invalid measurements) and in one case after we performed contrast enhanced ultrasonography we discovered multiple metastases (so ARFI was performed in the liver masses).

Regarding the 2 patients with cirrhotic ascites incorrectly classified for a 1.8 m/s cut-off value, in one case ARFI was difficult to determine (10 valid ARFI measurements and more than 7 invalid measurements).

Several studies have demonstrated the value of ARFI elastography for the prediction of liver cirrhosis and for the study of the liver in healthy subjects.

In a previous study performed by our group[9], in which we included 114 subjects (38 healthy volunteers, 76 patients with chronic hepatopathies in whom liver biopsy (LB) was performed, and 23 with clinical, ultrasonographic and/or endoscopic signs of cirrhosis) investigated by means of ARFI, a direct, strong, linear correlation (Spearman rho = 0.675) was found between ARFI measurements and fibrosis (P < 0.0001). The predictive value of ARFI for the presence of cirrhosis was also excellent; for a cut-off value of 1.8 m/s (for measurements made 1-2 cm under the capsule) the area under the receiver operating characteristic curve (AUROC) was 0.92.

In another study published in 2010 by our group[8], which included 71 patients with chronic viral hepatopathies, all with LB, the cut-off value of ARFI measurement for the diagnosis of cirrhosis was 1.8 m/s [AUROC 0.868, with 100% sensitivity (Se), 77% specificity (Sp), 58% positive predictive value (PPV) and 100% negative predictive value (NPV)].

In a study performed by Lupşor et al[7], 112 patients with chronic HCV hepatitis were evaluated by means of LB (the stage of fibrosis was assessed according to the Metavir scoring system), ARFI and TE (FibroScan). For a cut-off value of > 2 m/s for the prediction of cirrhosis, ARFI had 80% Se, 95.4% Sp, 90.3% PPV and 90% NPV (AUROC = 0.93). Also, in the study of Fierbinteanu-Braticevici et al[16] which evaluated 79 patients with chronic HCV hepatitis who underwent LB and ARFI, this new elastographic method had very good sensitivity and specificity for prediction of cirrhosis (for a cut-off value > 1.94 m/s ARFI had 100% Se, 98% Sp, 95% PPV and 100% NPV).

A study published by Goertz et al[10] included 57 patients with chronic viral hepatitis B and C who underwent ARFI and consecutive LB. The results were compared to the histological stage of fibrosis (F). ARFI values were significantly correlated with the histological stage of fibrosis (P < 0.001). The AUROC curve for the accuracy of ARFI imaging was 87% for prediction of cirrhosis (F = 4).

In a study published by Piscaglia et al[18], these authors included 133 patients with chronic liver disease evaluated by means of ARFI elastography and TE. In 70 patients they performed LB. The diagnostic accuracy for cirrhosis was first assessed in the 90 patients submitted to TE with > 13 kPa (47% of patients) as diagnostic for cirrhosis values. The best cut-off for cirrhosis with ARFI was then tested in the 70 patients with biopsy (cirrhosis in 38% of patients). The AUROC of ARFI for the diagnosis of cirrhosis (reference TE) was 0.941 with 1.75 m/s as the best cut-off (Se 93.0%; Sp 85.1%). ARFI demonstrated good performance also in patients with bioptic diagnosis of cirrhosis (AUROC 0.908, Se 81.5%, Sp 88.4%).

In all the studies presented above, the cirrhotic patients did not have ascites.

Regarding the evaluation of LS in healthy subjects, Gallotti et al[19] measured the stiffness of various abdominal organs by ARFI elastography in 35 healthy subjects, obtaining for the liver a mean value of 1.59 m/s. Goertz et al[10] obtained a mean LS value of 1.09 m/s in a group of subjects without liver pathology. Popescu et al[20] evaluated by means of ARFI elastography 82 subjects without known liver pathology. The mean value of ARFI measurements in normal individuals was 1.15 ± 0.21 m/s.

The results of our study support the conclusion that in the investigation of an ascites syndrome, the first investigation that should be performed after abdominal ultrasound should be ARFI elastography. Regarding the limitations of this study, ARFI is not a very good method for the evaluation of LS in cases of multiple metastases, in cases when performing ARFI in liver masses (when the liver structure is homogeneous in standard ultrasonography) or in cases with a success rate < 60% (success rate = the ratio of the number of successful acquisitions over the total number of acquisitions).

ARFI elastography is feasible in most patients with ascites (96.8%) and it has a very good predictive value for the cirrhotic or non-cirrhotic etiology of ascites.

Ascites syndrome is a quite common discovery in abdominal ultrasonography and several methods are used to establish the cause of ascites.

Acoustic radiation force impulse (ARFI) elastography is a new method, based on ultrasound, used for the evaluation of liver stiffness. The advantage of this elastographic method compared to transient elastography, is that it can be used in the presence of ascites. In our study, ARFI was determinable in 96.8% of the patients with ascites. ARFI had a very good accuracy (95.6% for a 1.8 m/s cut-off value) for the prediction of cirrhotic or non-cirrhotic etiology of the ascites.

This study supports the conclusion that in the investigation of an ascites syndrome, the first investigation that should be performed after abdominal ultrasound should be ARFI elastography.