Despite the advent and growing availability of magnetic resonance imaging, the imaging modality of choice in the acute care of stroke patients in many institutions remains computed tomography. The hyperdense artery sign is the earliest marker of acute ischemic stroke. In this short review, we discuss the pathology, incidence, clinical aspects, imaging findings, significance and future questions that need to be addressed concerning this important sign.

Computed tomography still remains the key imaging diagnostic tool in the work-up of patients with acute stroke. This is mainly due to its wide availability and quick and robust performance. The hyperdense artery sign (HAS) has long been known as an indicator of occluding clots in cases of acute ischemia on non-enhanced cranial computed tomography (NECCT). A hyperdense cerebral artery in the setting of acute ischemic stroke was first reported by Gács et al[1] in 1983. It is the earliest sign, and is visible long before parenchymal changes which are known as early ischemic signs. In principle, it becomes visible with the onset of occlusion in a cerebral vessel. The histopathological correlate for the HAS is a thrombus occluding the vessel[2]. When a thrombus is forming, the local hematocrit level rises due to extrusion of plasma leaving clotted cells and debris behind. Thus, the attenuation rises from less than 40 HU in flowing blood to approximately 80 HU. In contrast to atheromatous calcifications (see below) a hyperdensity caused by the HAS is reversible[3].

The HAS has always been described as having a high specificity (90%-100%). Nonetheless, other causes of HAS have been described. Due to the linear correlation between attenuation and hematocrit level it is easily understood that a high hematocrit level leads to hyperdense arteries[4,5]. Other than with the HAS not only one vessel is affected but all intracranial arteries and veins (Figure 1). Naturally, when contrast agent is injected, all intracranial vessels appear hyperdense on NECCT, either because a short time has elapsed after injection or because of increased retention, e.g. because of renal impairment. As another possible cause for a HAS, Koo et al[6] described a hyperdense middle cerebral artery (MCA) due to viral infection. Of course, other objects such as plaque of atheromatous origin[7] or foreign bodies, e.g. catheter fragments can cause a hyperdense artery. There are reports of hyperdense arteries in the setting of dissection[8-12]. It is not clear whether the pathological correlate of the HAS in these cases is the intramural hematoma or the intraluminal thrombus. Hypodense brain parenchyma due to infection or tumors (Figure 2) surrounding the vessel can give the impression of a pseudohyperdense vessel[13]. Additionally, atheromatous vessel calcifications can raise vessel attenuation and it can be difficult to discriminate intraluminal from mural hyperdensities. To establish objective criteria for HAS, Koo et al[6] defined a ratio of 1.2 when compared to the non-affected contralateral vessel or an absolute value of > 43 HU.

Figure 1 Non-enhanced cranial computed tomography of a 58-year-old female patient with a hematocrit of 58%. Note that all depicted intracranial arteries and veins appear hyperdense (curved arrows). No contrast agent was applied prior to the scan. 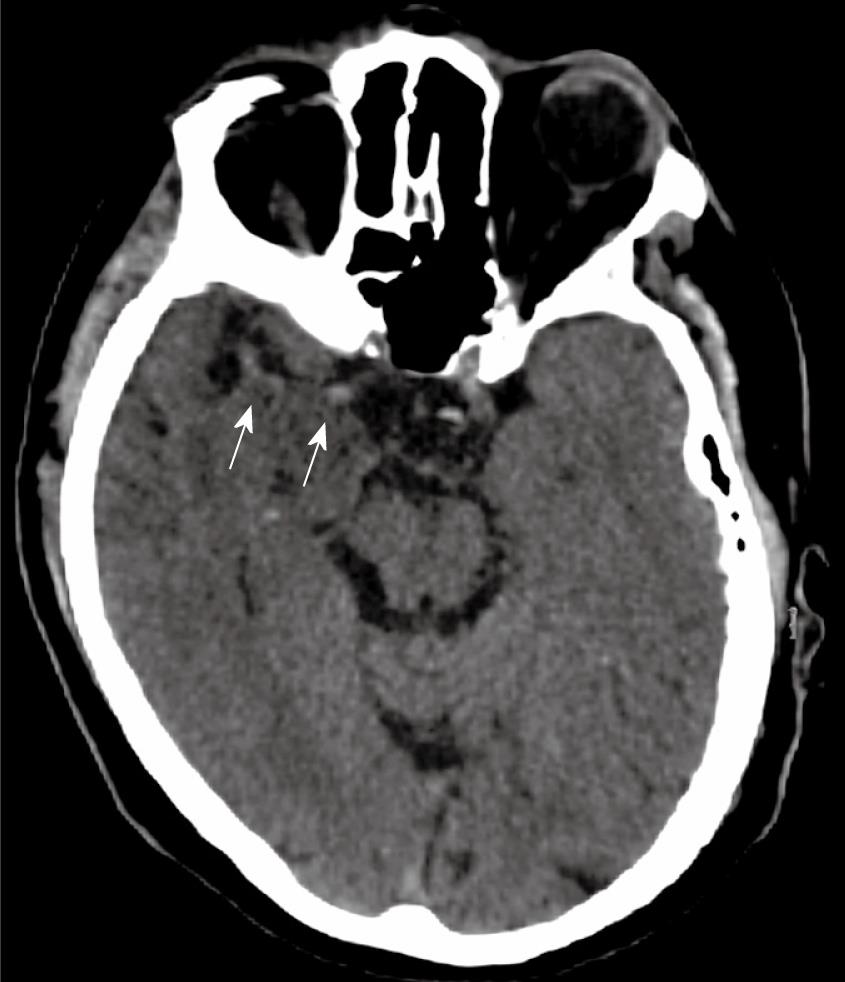 The HAS was first described in the MCA[1]. This is not surprising as the MCA is the most commonly affected vascular territory in strokes. Additionally, the MCA is the intracranial artery with the largest diameter which enables the detection of a hyperdensity in this vessel. Furthermore, almost its whole length runs within the imaging plane. There is an abundance of literature on the hyperdense MCA sign[14-25] (Figure 3). Other locations are less frequently reported. It has been described in the carotid artery (HICAS)[26], MCA distal branches as the “dot sign”[27,28], the anterior cerebral artery (HACAS)[29,30] (Figure 4), the posterior cerebral artery (HPCAS)[1,31,32] (Figure 5), the basilar artery (HBAS)[33-36] (Figure 6), and the vertebral artery[8]. 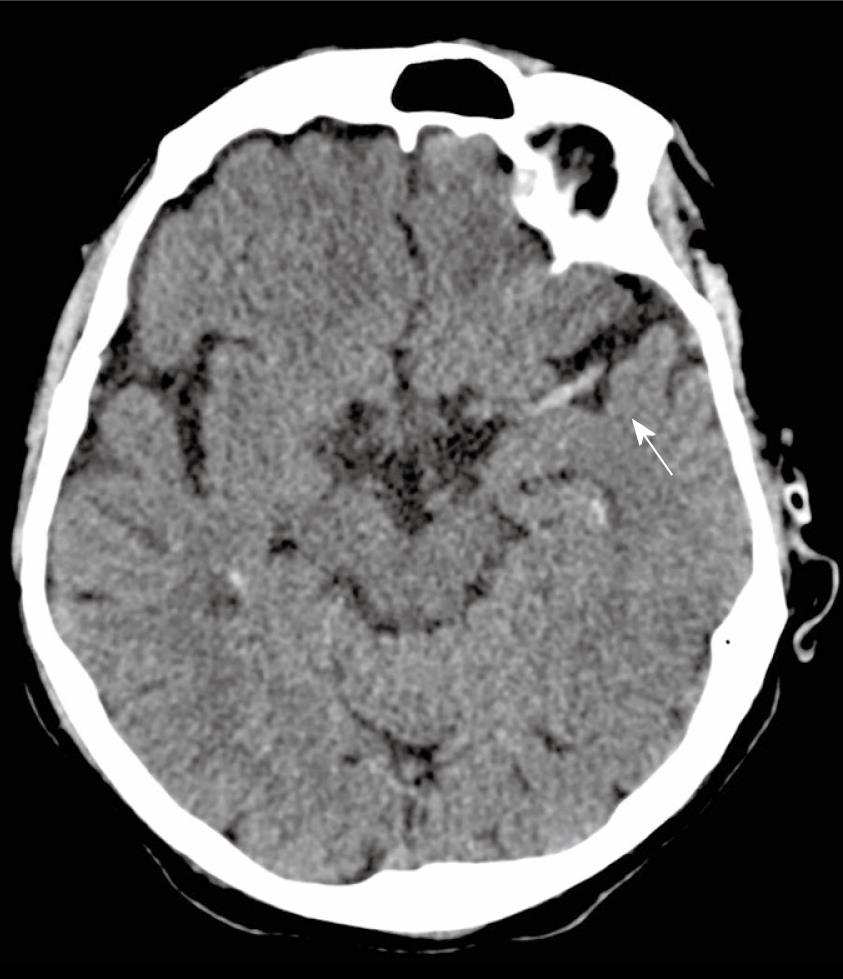 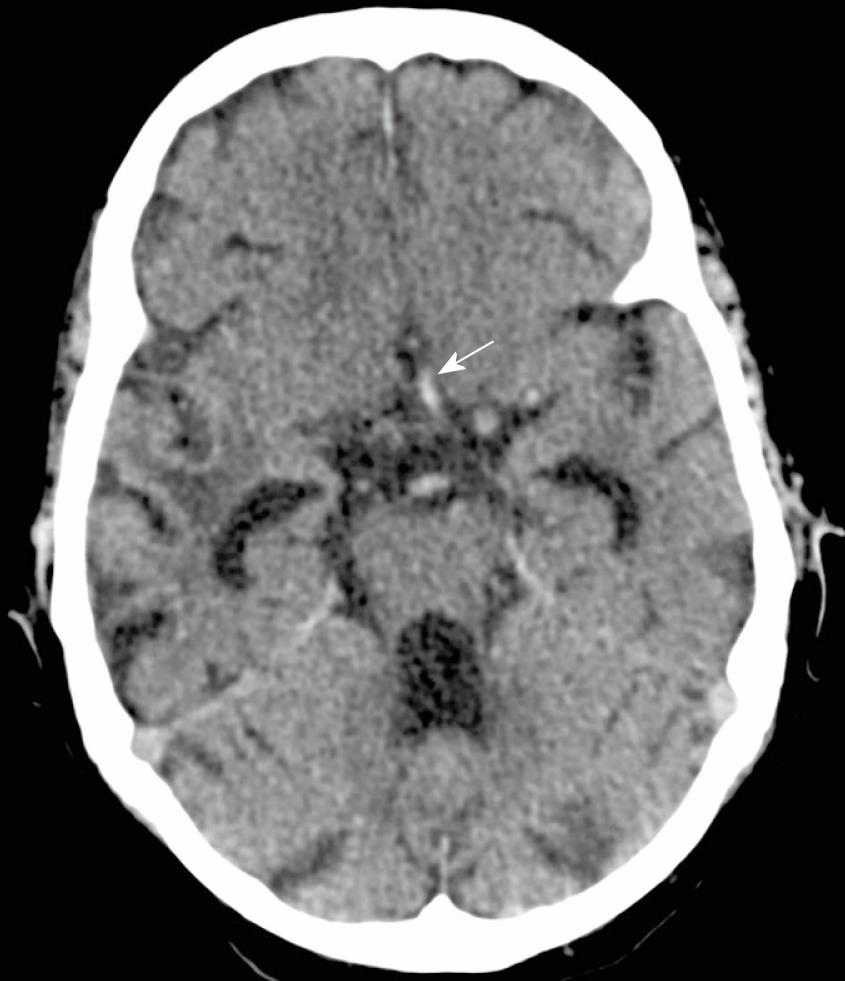 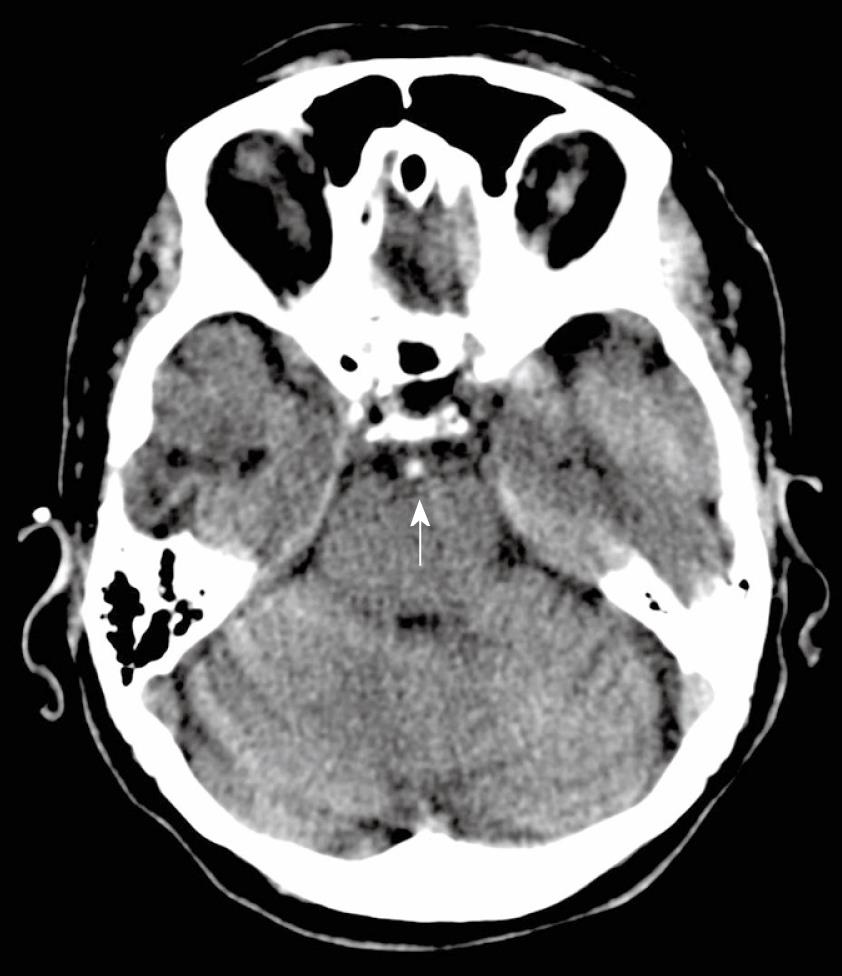 Figure 6 Hyperdense basilar artery (arrow) in a patient who was found unconscious.

In the case of an occluded basilar artery, the patient usually presents with loss of consciousness. The differential diagnosis include a variety of non-neurological causes and vary from heat exhaustion to intoxication, and only radiological recognition of the HBAS can propel the patient to appropriate recanalization therapy, i.e. intra-arterial thrombolysis (IAT) and/or intravenous thrombolysis (IVT).

The HAS has always been associated with a poor clinical outcome, large volume strokes, and severe neurological deficits[18]. This is probably caused by larger amounts of thrombus becoming visible on NECCT as an HAS, whereas smaller clots are invisible due to partial volume effects. Some studies have reported on the benefit of IVT in patients exhibiting a HAS[14-17], while others do not[18-22]. Two studies suggested that patients with a HAS benefited more from IAT as opposed to IVT[23,24]. This observation is in line with the afore-mentioned hypothesis that only large amounts of thrombus are visible on NECCT. What has prevented the HAS from becoming a more reliable marker of acute ischemic stroke is the fact that despite its high specificity it displays a low sensitivity of around 30%[25]. The reason for that is probably because of the large slice thickness in routine NECCT compared to the size of the vessels in question. On routine NECCT a slice thickness of 5 mm is not uncommon, while the MCA has a diameter of 2-3 mm. This discrepancy results in partial volume effects which blur the intraluminal hyperdensity. Two recent studies[37,38] examined the value of thin slice NECCT reconstructed on multidetector CT. The results in both studies were a striking rise in sensitivity to approximately 80%-100%. Riedel et al[38] also found a good correlation between vessel hyperdensity and thrombus volume when compared to computed tomography angiography (CTA).

If NECCT is capable of reliably detecting thrombus, an interesting question for future studies may be: is there a cut-off value for the length of intraluminal thrombus beyond which IVT proves ineffective? In these cases, IAT may be the therapeutic option of choice. A further question is whether it is possible to automatically detect thrombus and measure its amount? NECCT would be a powerful and widely available tool to address these issues. Therefore, ideally prospective studies including patients suffering from acute ischemic stroke should compare luminal contrast gaps due to intravascular clots as detected in CTA images with thin slice NECCT images showing thrombus as an HAS. In order to find a threshold of clot burden beyond which it is not possible to recanalize occluded vessels by IVT, the patients would have to be followed by imaging studies (either MRA, CTA or transcranial ultrasound) at a fixed time interval after therapy in order to investigate if the recanalization was successful or if it failed.