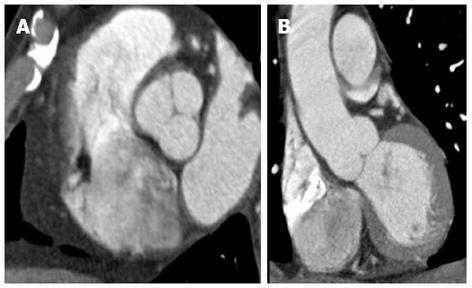 Figure 1 Cardiac-gated computed tomography aortogram in a 55-year-old with chest pain and suspected acute aortic syndrome. A: Axial oblique; B: Coronal reconstructions. No dissection or aneurysm was detected. Retrospective reconstruction at 78% of the cardiac cycle allowed for accurate evaluation of the aortic root and valve cusps in both axial oblique and coronal reconstructions with no pulsation artefacts.

Figure 2 A 47-year-old gentleman with Stanford type B aortic dissection. The dissection flap is flat in all the computed tomography angiographic images. The ascending aorta is not involved and the true lumen is smaller in calibre and shows early and more intense enhancement than the false lumen at the level of the right pulmonary artery (A). The small calibre true lumen gives rise to the coeliac axis (B) and is outlined by atherosclerotic calcifications (C). 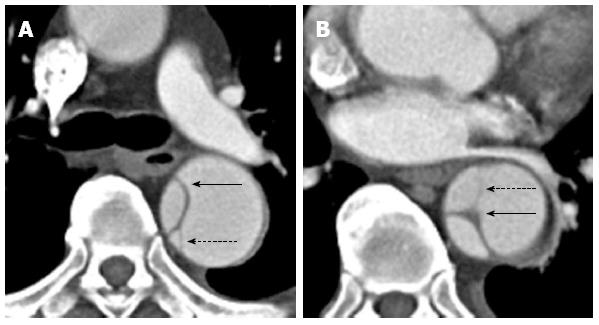 Figure 4 A 35-year-old gentleman with Marfan’s syndrome and a type B aortic dissection. Axial images (A and B) from a computed tomography aortogram reveals an intimomedial flap (arrows) with strands of incompletely sheared aortic media or “cobwebs” seen in the descending thoracic aorta (dashed arrows).

Figure 5 A 59-year-old lady with a type B aortic dissection. Axial images from a computed tomography aortogram show atherosclerotic calcifications outlining the true lumen at the lower thoracic aorta (A). The true lumen is of smaller calibre and shows early and more intense enhancement than the false lumen at this level. More inferiorly at the level of the left renal vein (B), eccentric intimomedial flap calcification (note the calcification along the true luminal aspect of the flap) is exquisitely demonstrated.

Figure 6 A 45-year-old with a type B aortic dissection. An axial image from a computed tomography aortogram at the upper abdominal aorta shows the “beak” sign (arrow): note the acute angle between the dissection flap and the outer wall of the larger calibre false lumen. The “beak” or space formed by the acute angle is filled with high-attenuation contrast-enhanced blood in this case but it may stay unopacified when filled with clots. 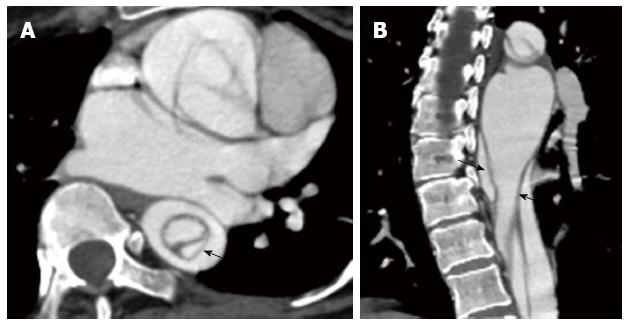 Figure 7 A 37-year-old gentleman with Marfan’s syndrome and a type A aortic dissection. The axial image at the level of the left atrium shows an intimointimal intussusception type dissection in the descending thoracic aorta with the true lumen surrounded by the false lumen (A and B; intimomedial flap highlighted by the arrows). 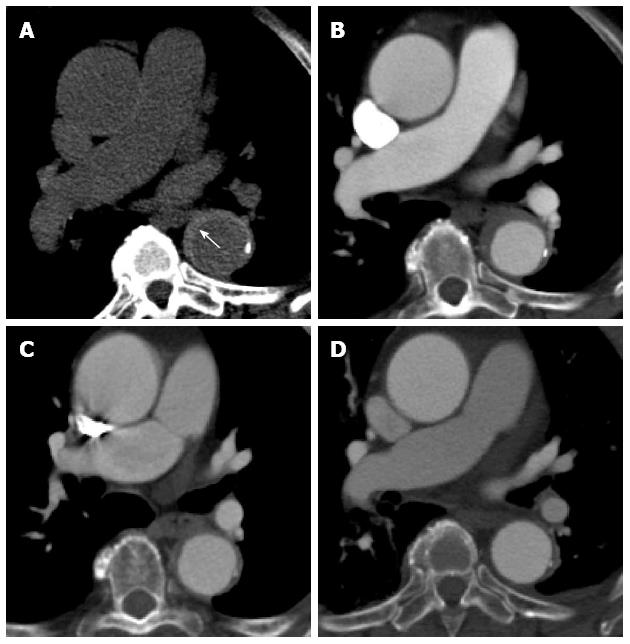 Figure 8 A 61-year-old lady with severe chest pain, breathlessness and a prior history of atrial flutter. Computed tomography aortogram in the emergency department shows hyperdense, eccentric wall thickening of the aortic wall consistent with an intramural haematoma (A, white arrow). A concurrent contrast enhanced axial image at the same level shows no leakage of contrast into this thickened aortic wall (B). The intramural haematoma shows partial resolution at 1 mo (C) and complete resolution at 6 mo (D).

Figure 9 Computed tomography aortogram in a 75-year-old man shows an intramural hematoma (note the eccentric wall thickening in the descending aorta) with intimal surface defect (A: arrow). At one year follow up it has progressed into a frank penetrating ulcer (B: arrow).

Figure 10 A 62-year-old with acute chest pain. A computed tomography aortogram (A-coronal) shows a penetrating atherosclerotic ulcer at the proximal descending aorta with contrast seen within the aortic media (black arrows) and non-opacifying hyperdensity throughout the rest of the descending thoracic aortic wall compatible with intramural haematoma (white arrow). The axial image (B) shows the contrast extending within the aortic wall and splitting the same. The sagittal oblique reconstruction (C) gives a better demonstration of the penetrating atherosclerotic ulcer at the distal aortic arch (black arrow) with intramural hematoma and progressing into an aortic dissection (white arrow). 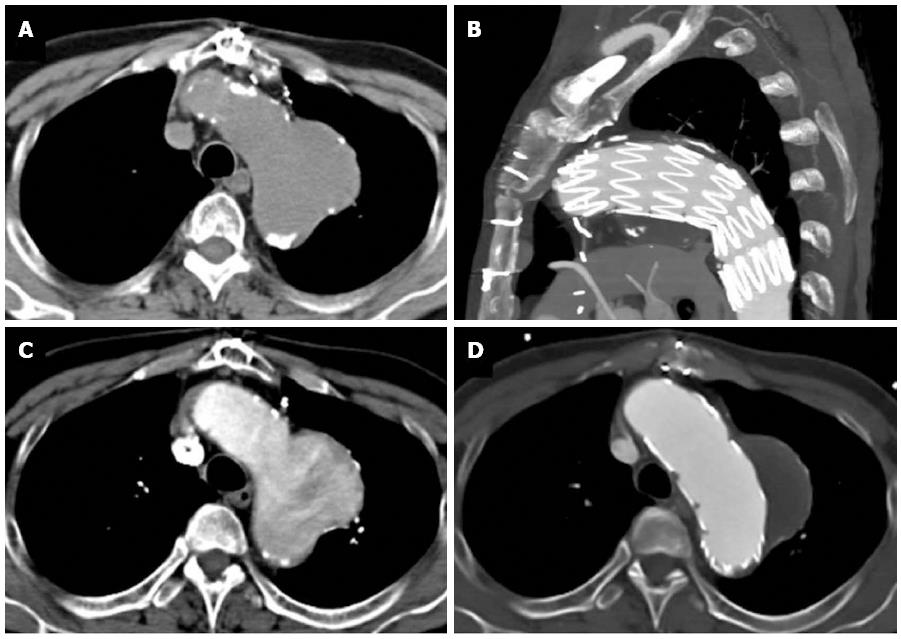 Figure 11 A 68-year-old with chest pain and long standing hypertension. A saccular aneurysm is seen arising from the lateral aortic arch just distal to the origin of the left subclavian artery on this computed tomography aortogram. Atherosclerotic calcifications are seen at the periphery of the aneurysm (A) and there is heterogeneous contrast opacification secondary to turbulent flow on the arterial phase (B). No evidence of rupture is apparent. The aneurysm was excluded using an aortic stent graft as seen in the sagittal plane (C). The excluded sac has completely thrombosed with no endoleak as seen on an axial image (D).