Traditionally, breakfast skipping (BS), and recently late-night dinner eating (LNDE), have attracted attention in public health because they can predispose to cardiometabolic conditions such as obesity and type 2 diabetes. Intriguingly, it has become evident that short duration of sleep elicits similar health risks. As LNDE, BS, and short sleep can be closely related and can aggravate each other, these three should not be considered separately. In this context, LNDE (or its equivalents, snacking or heavy alcohol consumption after dinner) and BS may be representative unhealthy eating habits around sleep (UEHAS). While it is important to take energy in the early morning for physical and intellectual activities, attaining a fasting state is essential for metabolic homeostasis. Our previous UEHAS studies have shown that BS without LNDE, i.e., BS alone, is not associated with obesity and diabetes, suggesting the possibility that BS or taking a very low energy breakfast, which could yield fasting for a while, may prevent obesity and diabetes in people with inevitable LNDE. Further studies considering UEHAS and short sleep simultaneously are needed to elucidate the effects of these unhealthy lifestyles on cardiometabolic diseases.

Core tip: Breakfast skipping (BS), late-night dinner eating (LNDE), and short duration of sleep have attracted attention because they elicit similar health risks: Obesity and type 2 diabetes. However, to-date these factors have been considered separately in terms of their health risks. LNDE and BS may be representative unhealthy eating habits around sleep (UEHAS). It is important to take energy in the early morning, whereas attaining a fasting state is essential for metabolic homeostasis. Therefore, BS or taking a very low energy breakfast may prevent obesity and diabetes in people with LNDE. Consideration of UEHAS and short sleep deserves further study.

Traditionally, breakfast skipping (BS) has been considered to contribute to various cardiometabolic conditions including obesity and type 2 diabetes not only in children and adolescents, but also in adults including the elderly[1-5]. However, conflicting results have been reported[6-8], probably because definitions of breakfast and BS have not been established yet[9,10]. Multiple confounding factors, including age, sex, morbidities, and dietary culture, may also affect the outcomes, although these confounders are usually statistically adjusted for. Moreover, for the past decade, it has been argued that BS may result from conditions in the preceding night, such as late-night dinner eating (LNDE), eating snacks after dinner, or drinking alcohol until immediately before going to bed[11-15].

Simultaneously, the quality and quantity of sleep, which usually manifest as short or long duration of sleep, may affect conditions in the early morning such as appetite for the breakfast meal[16-19]. Of note, short duration of sleep has been robustly associated with similar cardiometabolic conditions to those associated with BS and LNDE, such as obesity, diabetes, and metabolic syndrome, as well as increased mortality[20-23]. Taken together, the effect of short sleep on the above health risks may include the effect of BS, and vice versa. However, short sleep (or possibly long sleep) and BS have rarely been considered together. Circadian misalignment may be prevalent in individuals with LNDE, BS, and short sleep. Because LNDE, BS, and short sleep can be closely related and can aggravate each other[9,11,13,15], these three factors should not be considered separately in terms of health and cardiometabolic conditions. In this context, LNDE and BS may be representative unhealthy eating habits around sleep (UEHAS) (Figure 1). Taken together, specific features can form when UEHAS and short sleep (UEHASs) are combined because of the relationships between them, whereas sleep and UEHAS are sufficiently independent in individuals with good sleep and healthy eating-habits around sleep (SHEHAS). 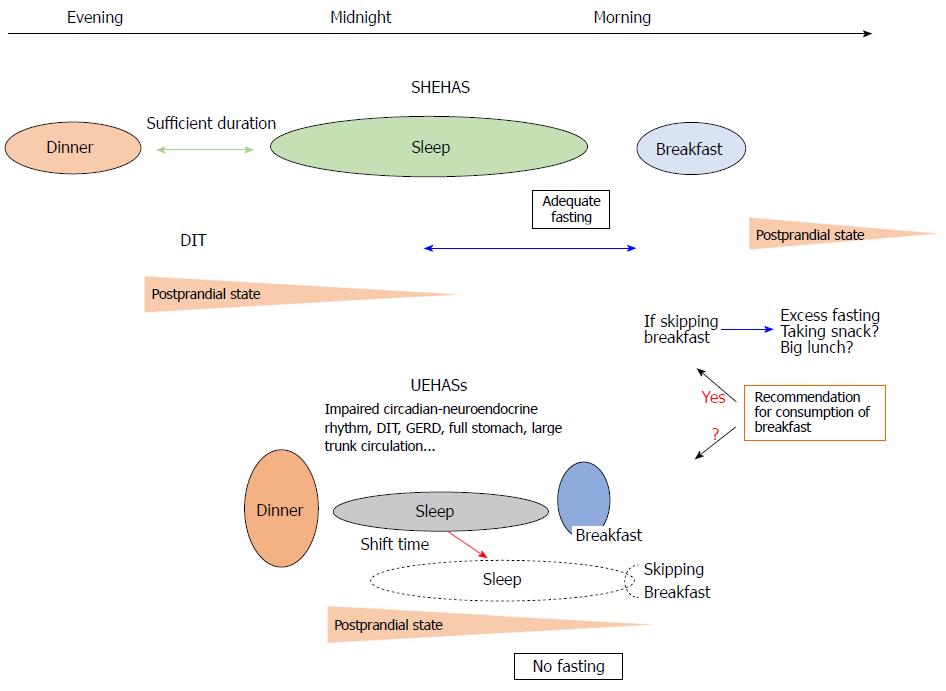 It is reasonable to assume that BS prolongs the fasting state and results in a lack of energy in the morning, which can result in hampered physical and intellectual activities and possibly in larger meal consumption later in the day[9,24], though conflicting outcomes have been reported[25-28]. However, this theory may be exclusively applicable to healthy people without LNDE, i.e., those who do not take dinner late at night. Of note, LNDE may be associated with hyperglycemia[12,29-31], which remains until early morning. A time period of less than 6 h from LNDE to the end of a short sleep falls short of the 8-10 h criteria commonly used for overnight fasting[32,33], although the definition of overnight fasting has not been definitively established. Theoretically, therefore, LNDE within 2 h of going to bed combined with a short (< 6 h) sleep does not yield a fasting state in the early morning. If people with LNDE sleep for a normal length of time, the opportunity for breakfast consumption may be missed because they do not have enough time to take a breakfast meal (Figure 1).

As mentioned by numerous experts, it is important to take energy in the early morning for healthy physical activity, whereas attaining a fasting state for a certain period in the day, usually during sleep because sleep involves equal or lower energy expenditure than resting energy expenditure[34,35], is essential for metabolic homeostasis. Adequate fasting especially during sleep can enable plasma glucose to return to the preprandial level and plasma insulin to decline to baseline level, which prevents over-secretion of insulin and has a protective action for β-cell function in the pancreas. Having an appetite, i.e., a feeling of hunger, for breakfast may be inappropriate if the body is not in a fasting state (etymologically, taking a breakfast without fasting beforehand does not constitute a break of fasting). Consumption of breakfast without adequate fasting may lead to an absence of the fasting state throughout the day, which results in sustained hyperglycemia and elevated insulin secretion.

Meanwhile, in view of the time course, LNDE can affect the quantity and the quality of the following sleep[36,37], which may in turn affect the conditions of the next morning, i.e., eating breakfast. Studies concerning the effect of LNDE on sleep are limited and the underlying mechanisms remain poorly understood. LNDE can deteriorate circadian rhythms and the secretion of leptin, peptide-YY, melatonin, orexins, and ghrelin[38-41]. LNDE, which can result in sleep with a full stomach, may cause gastroesophageal reflux disease[42,43] and reduced diet-induced thermogenesis[38,44], both of which reduce the quality of sleep. Additionally, higher circulation volumes consisting of a large volume of water and high concentrations of sodium and glucose in the trunk circulation may burden the heart, vessels, and kidney, possibly resulting in arrhythmia and incidents of proteinuria, as observed in our previous studies[11,45].

Shorter time periods between dinner and sleep, and between sleep and breakfast, can intensify the plausible effect of the postprandial condition after LNDE on sleep and the effect of poor sleep on breakfast, respectively (Figure 1). In addition, LNDE may affect conditions in the early morning after wakeup, especially when the duration of sleep is shorter. Therefore, it is best to refrain from LNDE for a healthy sleep and for optimal conditions in early morning. However, if it is impossible to prevent LNDE because of compulsory shift work or family/individual reasons, the dinner should have less energy and consist of a small amount of easy-to-digest ingredients. Alternatively, instead of completely skipping breakfast, consumption of a very low-calorie meal of less than 200 kcal including water, minimum minerals, and vitamins[46,47] may be an effective option for avoiding potential fasting and adverse reactions such as hypoglycemia and dehydration. Simultaneously, healthy sleep habits may be necessary for conditions the next morning.

Our previous UEHAS cross-sectional studies[11,12] have shown that BS without LNDE, i.e., BS alone, was not associated with obesity or diabetes. Therefore, these results suggest a paradoxical possibility that BS or taking a very low energy breakfast might prevent obesity and diabetes in people with habitual LNDE. Otherwise, hunger, but not fasting, occurs throughout the day in individuals with LNDE. It is possible that BS or taking a smaller breakfast in children with LNDE[13] may be a natural physiological response that manages to avoid the sustained metabolic abnormalities such as hyperglycemia caused by LNDE.

Importantly, the timing of meals substantially affects peripheral clocks existing in multiple organs, including liver, adrenal gland, stomach, intestines, pancreas, kidney, heart, and lungs[48-50]. Therefore, UEHAS may disrupt the peripheral circadian rhythm and thereby affect the central circadian rhythm, regulated by a master circadian clock located in the suprachiasmatic nucleus of the anterior hypothalamus, via irregular secretion of hormones including cortisol, ghrelin, leptin, insulin, glucagon, and glucagon-like peptide-1[48]. This metabolic feedback can be mediated through so-called circadian-endocrine cross-talk[49]. In particular, LNDE may enhance the desynchrony between the peripheral and central circadian rhythms, possibly by shortening the duration of sleep, besides unfavorable effects of LNDE on the secretion of incretins. Intriguingly, plasma insulin has been reported to be fundamentally regulated by pancreatic autonomous circadian oscillators, independent of the suprachiasmatic nucleus[51]. In this regard, however, the composition of a meal, for instance the proportion of energy as carbohydrate, can also affect the peripheral circadian rhythm because insulin is usually secreted in in greater quantities following a carbohydrate rich meal. This topic therefore warrants further study.

In conclusion, taking a breakfast is recommended primarily for people without LNDE to take sufficient energy for intellectual and physical activities in the morning (Figure 1). In contrast, taking a breakfast, especially of a full amount, may not be recommended for people with habitual LNDE to allow them to attain a fasting state for a certain period per day. However, a well-considered meal for late-night dinner or breakfast can ameliorate the conditions above and the metabolic abnormalities in people with LNDE and/or BS, in harmony with the autonomous circadian-endocrine system. Health professionals such as physicians and dieticians should carefully consider individuals’ backgrounds and chrono-nutrition, and UEHASs. Further integrated studies are needed to elucidate the effects of eating behaviors and sleep on health and cardiometabolic diseases in view of scientific and public interests.