Crohn's disease (CD) causes a range of digestive symptoms including recurrent diarrhea, abdominalgia, and flatulence, and severely impacts the quality of life of patients. Infliximab, a monoclonal antibody against tumor necrosis factor alpha, has recently been promoted as a therapeutic treatment for CD, but its safety margins remain uncertain. We report a case of rapidly progressive colorectal cancer that was diagnosed in a patient with CD who had previously been treated with infliximab.

This case report refers to a 40-year-old male with a 6-year history of CD. The patient underwent transverse colostomy because of inflammatory ileus in 2017. He subsequently received infliximab treatment in 2018. Ten months later, worsening contracture of the transverse colostomy was observed. Imaging tests indicated that the patient may have developed colon cancer with extensive peritoneal implantation. At the same time, colonoscopy revealed a rectal mass and pathological examination indicated well-differentiated adenocarcinoma. Palliative ileostomy was performed to improve defecation in 2019. During the operation, a small nodular mass in the mesentery of the small intestine was identified and pathological examination of the mass revealed advanced adenocarcinoma. The patient was diagnosed with advanced colorectal cancer and administered palliative chemotherapy. He died in June 2020.

We stress the importance of recognizing the possible occurrence of malignance in patients with CD receiving infliximab.

Core Tip: Crohn’s disease can result in diffuse intestinal lesions, including intestinal edema, stenosis, and even mucosal bleeding, which makes pathological diagnosis difficult. Although tumor necrosis factor alpha inhibitors are efficacious for inflammatory bowel disease, they may contribute to malignancy in particularly susceptible individuals. This case demonstrates that when a patient is receiving long-term treatment with infliximab, it is important to monitor for the development of neoplasia. When neoplasia is found, surgical resection must be performed in time to prevent tumor progression and spread.

Tumor necrosis factor (TNF) is mainly produced by the monocyte macrophage system. It is a pro-inflammatory factor that inhibits the apoptosis of inflammatory cells. However, it also induces intestinal epithelial cell apoptosis, destroys the intestinal mucosal barrier, and causes inflammation of the intestinal tract. Crohn's disease (CD) is a non-specific intestinal inflammatory response of unclear etiology. At present, it is considered to be caused by multifactor interactions. Intestinal monocytes in patients with CD express high levels of TNF, and TNF participates in inflammatory damage of the intestinal mucosa[1]. Infliximab, a monoclonal antibody against TNF-α, is used in the clinical treatment of inflammatory bowel disease (IBD). The mechanism of action of anti-TNF therapy in IBD has been previously reported[2]. However, when used in immune-mediated inflammatory diseases, TNF inhibitors are associated with risk of infection and the occurrence of malignancy[3]. The incidence of various types of malignancies, including lung cancer, lymphomas, carcinoma of the small intestine, and hepatocellular carcinoma, have been described in a series of cases[4-7]. Typically, the occurrence of tumors is closely related to the immune system, but it is currently uncertain whether it is immune-mediated therapy or the patient’s disease that causes such malignancies.

Here, we describe a case of colorectal cancer (CRC) that was diagnosed in a patient with CD who had previously been treated with infliximab.

The patient was diagnosed with CD in 2014. He experienced recurrent diarrhea and abdominal distension. After diagnosis, he received symptomatic treatment. In 2017, due to acute exacerbation of his symptoms, such as abdominal pain and the development of ileus, transverse colostomy was performed. This effectively relieved his symptoms. Later, he was treated with mesalazine but responded poorly to this treatment. No neoplastic occurrence was observed by contrast-enhanced CT (Figure 1). Hence, he began to receive induction treatment with infliximab in 2018 (5 mg/kg intravenous infusion at weeks 1, 2, and 6, and every 8 wk thereafter). Ten months later, the patient returned to hospital due to progressive contracture of the transverse colostomy.

Figure 1 Images from abdominal contrast-enhanced computed tomography scan. A: Local dilatation and edema of the intestine and the disappearance of haustra of colon; B: There was no positive finding of rectum.
History of past illness

The patient had no special history of past illness, other than seafood allergy. His medical history was unremarkable.

The patient was a nonsmoker and his family were negative for cancer.

The patient’s temperature was 36.6 °C, heart rate was 78 bpm, respiratory rate was 20 breaths per min, and blood pressure was 125/60 mmHg. He was skinny and had a scaphoid abdomen. The contracted transverse colostomy was located in the upper abdomen.

Blood analysis revealed anemia with a hemoglobin level of 11.1 g/dL. The patient had a normal platelet count and no significant change in biochemical and plasma electrolytes. His serum carcinoembryonic antigen concentration was 4.48 ng/mL, carbohydrate antigen 19-9 (CA19-9) was 762.80 U/mL, and CA24-2 was > 150.00 U/mL.

Positron emission tomography (PET) and computed tomography (CT) revealed the presence of a large soft tissue mass, adjacent to the transversostomy, which had high levels of glucose metabolism. Multiple nodules were present in the abdominal cavity, all with increased glucose metabolism. In conclusion, the carcinoma from the gastrointestinal tract had metastasized widely (Figure 2). 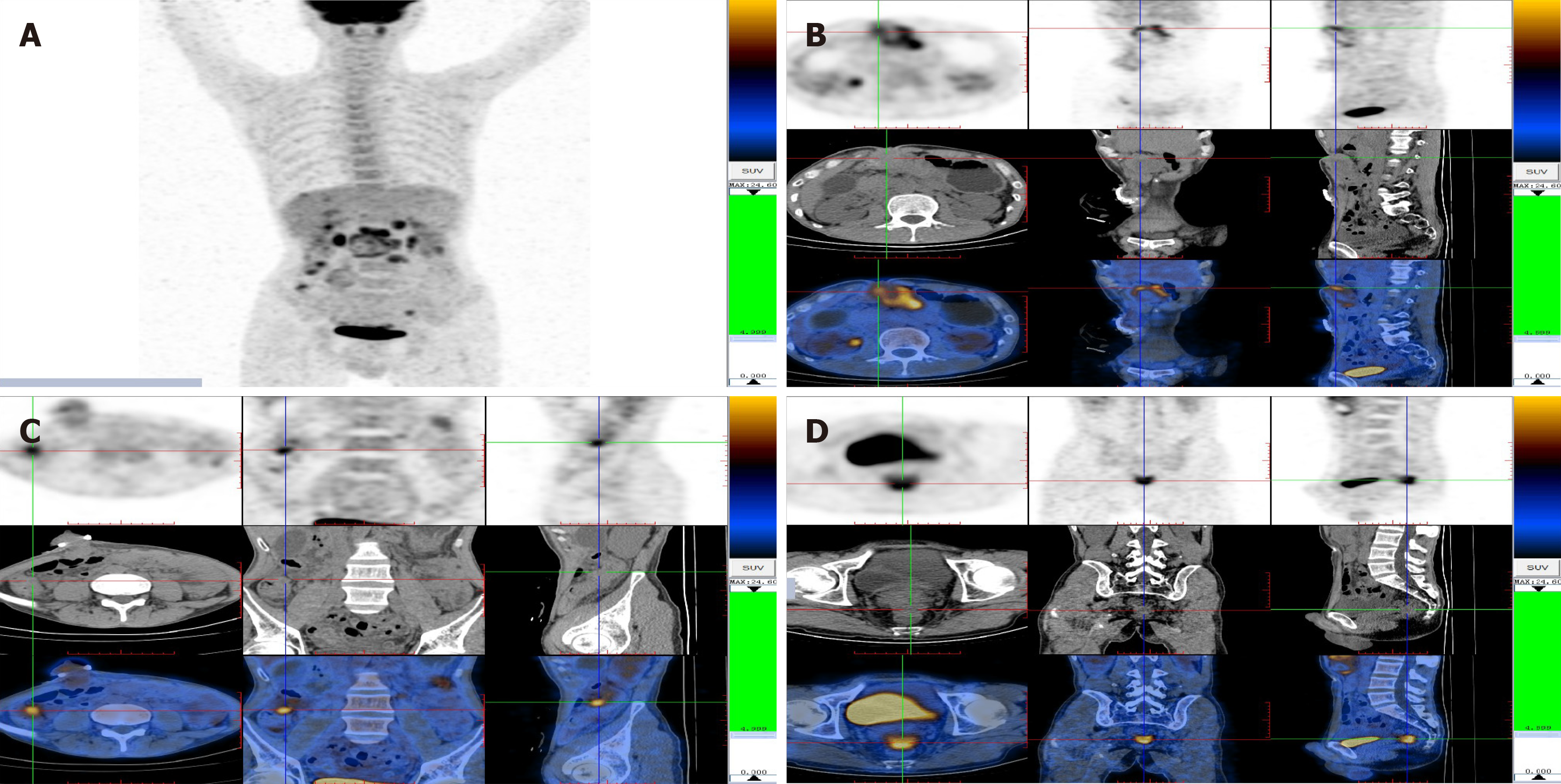 Colonoscopy via the anus revealed a mass 5 cm from the rectum; the remaining lumen was unable to be evaluated because of the stricture. Pathological examination of the endoscopic biopsy specimen revealed well-differentiated adenocarcinoma in the rectum (Figure 3). The patient was diagnosed with advanced CRC based on the imaging tests and endoscopic findings.

The surgery was completed successfully. The patient recuperated well and was discharged on postoperative day 18. However, the patient had advanced stage malignancy and was managed with palliative chemotherapy at Peking University Cancer Hospital & Institute. He died in June 2020.

This case report describes a patient with CD. The patient was previously diagnosed with inflammatory changes in the large bowel but was not diagnosed with significant dysplasia. The patient started receiving infliximab treatment. Ten months later, he developed CRC and extensive peritoneal implantation with multiple metastases.

IBD is a well-recognized risk factor for CRC. A meta-analysis involving 12 studies indicated a 2.5-fold relative risk of developing CRC in CD[8]. The factors involved in the pathogenesis of CRC in IBD are closely related to chronic inflammation, such as the induction of cyclooxygenase 2 (COX-2), inflammatory cytokines, and chemokines[9]. Reactive oxygen and nitrogen species produced by inflammatory cells can affect the regulation of genes that encode factors that prevent carcinogenesis (e.g., p53, DNA mismatch repair proteins, and DNA base excision-repair proteins)[10]. Intestinal monocytes in patients with CD express high levels of TNF. TNF-α can initiate carcinogenesis by promoting DNA damage and stimulating angiogenesis, and it can also induce expression of COX-2, which induces angiogenesis to promote tumor growth[10].

Infliximab is an efficacious anti-TNF medication that is widely used for the treatment of IBD. However, several reports have described the incidence of various types of malignancies in patients treated with infliximab. Colombel et al[11] conducted a retrospective cohort study of 500 subjects treated with infliximab. Nine patients developed malignant lesions; three of these cases were considered to possibly be related to the infliximab therapy[11]. Sifuentes et al[4] described the case of a 73-year-old man who developed lung cancer during treatment with infliximab. This case was further complicated by perforation of a metastasis in the sigmoid colon[4]. Carvalho et al[5] reported a case of Hodgkin's lymphoma in a patient with CD under treatment with infliximab[5]. Another retrospective study described 22 cases, including 20 cutaneous T-cell lymphomas (CTCL) and 2 cutaneous B-cell lymphomas. In the CTCL group, 75% of the patients received anti-TNF-α agents for a presumed inflammatory skin condition and the authors noted that the use of anti-TNF-α therapy down-regulates innate and adaptive immunity, which might normally control the proliferation of malignant lymphocytes[12]. Nocturne et al[13] reported that natural killer cells exposed to anti-TNF have impaired function and reduced anti-lymphoma activity[13]. On the other hand, analysis of the TREAT Registry data revealed that patients with severe CD who received infliximab had similar rates of mortality, neoplasm, and lymphoma compared to those who did not receive this treatment[14].

Although there is currently no definitive evidence of a causal link between infliximab therapy and cancer, infliximab is a TNF-α inhibitor and its effect on the immune system has been reported in the above studies. In addition, long-term use of anti-TNF agents for ankylosing spondylitis reportedly causes a marked reduction in T cells, both in the CD4+ and CD8+ compartments[15]. Other experimental studies have shown that TNF-α-deficient mice have overall impairment in lymphocyte-mediated cytotoxicity, and suppression of TNF-α may promote tumor growth[16].

In our case, pathological diagnosis of colon cancer was difficult due to the patient’s inflammatory status and concomitant stenosis; PET-CT examination provided the basis for our diagnosis of colon cancer. We should have strongly suspected that the worsening contracture of the transverse colostomy may have been caused by progressive colon cancer. Due to diagnosis difficulty, most serious lesions can only be seen during surgery for complications, which explains why up to 56% of adenocarcinomas in CD are diagnosed as high-grade stage IV disease[17]. Another report described a male with longstanding CD who was diagnosed with adeno-carcinoma of the rectum and anus after treatment with infliximab[18]. Smaali and Sekkach[19] described a patient with anorectal adenocarcinoma after infliximab treatment of CD, and reported that 4.3% of rectal adenocarcinomas are related to CD fistulas[19]. However, in the current case, we were unclear whether the patient had primary rectal cancer or implantation metastasis from colon cancer. Established risk factors for the development of CRC in IBD include disease duration of 8 years or more and family history of CRC[20]. However, in our case, the CRC was detected after 10 mo of infliximab treatment and rapidly progressed, suggesting that the lesion may be time-related to infliximab treatment.

At present, there is widespread use of biological therapies for the treatment of IBD; infliximab is the most commonly used treatment. However, infliximab might be causally related to cancer. Although this link is uncertain, infliximab treatment may be a risk factor for cancer. The fact that, in most cases, tumors are diagnosed after infliximab treatment and there are often extensive metastases suggests that infliximab might contribute to tumor progression and extension in some individuals. Therefore, it is necessary to closely monitor patients who use infliximab or other TNF-α inhibitors, especially those at risk of cancer, such as those with CD and worsening stricture of the large bowel. In all cases of IBD, we recommend that differential diagnosis should also consider the development of neoplasia. Clinicians must pay close attention to the potential for malignancy, especially in patients who are receiving TNF inhibitor therapy. The possible relationship between anti TNF-α and cancer, and the mechanisms of tumor growth and progression, remain to be proven.

I would like to express my gratitude to all those who helped me during the writing of this thesis and their efforts in the management of this patient.