A total of 75 consecutive patients with non-metastatic rectal cancer from March 2004 to November 2008 were analyzed retrospectively at our institute. The mRNA expressions of VEGFR1 and TUBB3 were detected by multiplex branched DNA liquid-chip technology. The Cutoff Finder application was applied to determine cutoff point of mRNA expression. SPSS software version 22.0 was used for analysis.

VEGFR1 expression and lymph node metastasis independently and jointly affect survival. Moreover, low expression of VEGFR1 and TUBB3 presented a better OS in patients with non-metastatic rectal cancer, which might serve as a potential prognostic factor.

Rectal cancer is one of the most diagnosed malignancies among both males and females worldwide with worse outcomes than colon cancer[1,2]. Clinically, patients showed various outcomes to multimodality therapies. Nowadays, personalized and precision medicine has become essential in the treatment of rectal cancer. Recent studies conducted gene expression profiling to predict the response and long-term prognosis of malignancies[3,4]; however, no consensus was achieved on prognostic gene profiling for rectal cancer.

Vascular endothelial growth factor (VEGF) possesses a significant role in angiogenesis by binding to VEGFR1 and VEGFR2, which is required for cancer progression and metastasis[5,6]. A phase II trial indicated that VEGF could predict the pathological response to locally advanced rectal cancer patients treated with neoadjuvant cetuximab-based chemoradiation[7]. In addition, class III β-tubulin (TUBB3) has been reported to play a critical role in tumor development and malignant transformation as a β-tubulin isotype. The variable levels of expression of the gene have been reported in colon, lung, ovary, kidney, prostate, and throat cancer with solid tumors[8-10]. However, only a few studies focused on its role in rectal cancer.

Herein, our study attempted to explore the potential prognostic value of VEGFR1 and TUBB3 for long-term survival in non-metastatic rectal cancer.

Eighty cases of well-preserved formalin-fixed and paraffin embedded tumor tissue specimens that had undergone total mesorectal excision (TME) at the Fujian Cancer Hospital from March 2004 to November 2008 were retrospectively examined. Among these, two patients with previous malignancy and three with distant metastasis were excluded. Finally, 75 patients who fulfilled the following inclusion criteria were enrolled in the study: (1) Pathologically confirmed as primary rectal adenocarcinoma; (2) underwent TME; (3) no evidence of distant metastasis; (4) no previous or concurrent malignancy; and (5) complete follow-up information was obtained.

The variables such as gender, age, preoperative carcino-embryonic antigen (pre-CEA), pre-operative hemoglobin (pre-Hb), distance to the verge, T stage, lymph node metastasis, venous invasion, and tumor differentiation were considered. The T stage and lymph node metastasis were re-diagnosed based on the 8th Edition of the American Joint Committee on Cancer (AJCC)[11].

All patients underwent TME, including abdominoperineal resection and low anterior resection. Of these, eight cases received neoadjuvant chemoradiotherapy followed by TME. A total of 66 cases received 5-fluorouracil (5-FU)-based chemotherapy. The overall survival (OS) was defined as the duration from the date of diagnosis to the last follow-up or the date of death due to any cause, which was obtained from the medical records and telephonic interviews.

The formalin-fixed and paraffin embedded (FFPE) tumor tissue specimens containing more than 70% of tumor cells were selected. The Multiplex branched DNA liquidchip (MBL) technology (Guangzhou SurExam Bio-Tech Co., Ltd., China) was implemented to determine the mRNA expression levels of VEGFR1 and TUBB3. The FFPE tissue samples were lysed in the presence of proteinase K, at 56°C for 2 h. Then, the lysate was transferred to a 96-well plate containing the blocking reagent, capture beads with probes for VEGFR1 and TUBB3, and target gene-specific probe sets. The sandwich nucleic acid hybridization was carried out for 16 h. The unbound RNA was removed by three washes with buffer under a vacuum system. The signal bound to the target mRNA was amplified with a streptavidin-conjugated phycoerythrin solution at 50°C for 30 min. The fluorescence values of the samples were identified and analyzed using Luminex 200 system (Luminex, Austin, TX, United States), which were regarded as the RNA expression levels of each gene. The cutoff point of mRNA expression affecting the survival was determined by the Cutoff Finder application[12].

The end point of our analysis was OS. The association of gene expression level and clinicopathological features was studied by the χ2 and Fisher’s exact tests. The association between the mRNA expressions of VEGFR1 and TUBB3 was studied by the Spearman correlation test. The Kaplan–Meier test was used to analyze the OS, and Cox regression model (LR forward) was employed for univariate and multivariate analysis. Receiver operating characteristic (ROC) analysis was employed for assessing the specificity as well as the sensitivity of predicting OS by specific parameters. The statistical significance of area under the ROC (area under curve, AUC) was calculated by Delong’s test[13]. P-values < 0.05 were deemed significant. The statistical analysis was conducted by SPSS version 22.0 (IBM Corporation, Armonk, NY, United States). The statistical methods of our study were reviewed by Qian-yu Ni from The First Affiliated Hospital of Fujian Medical University. 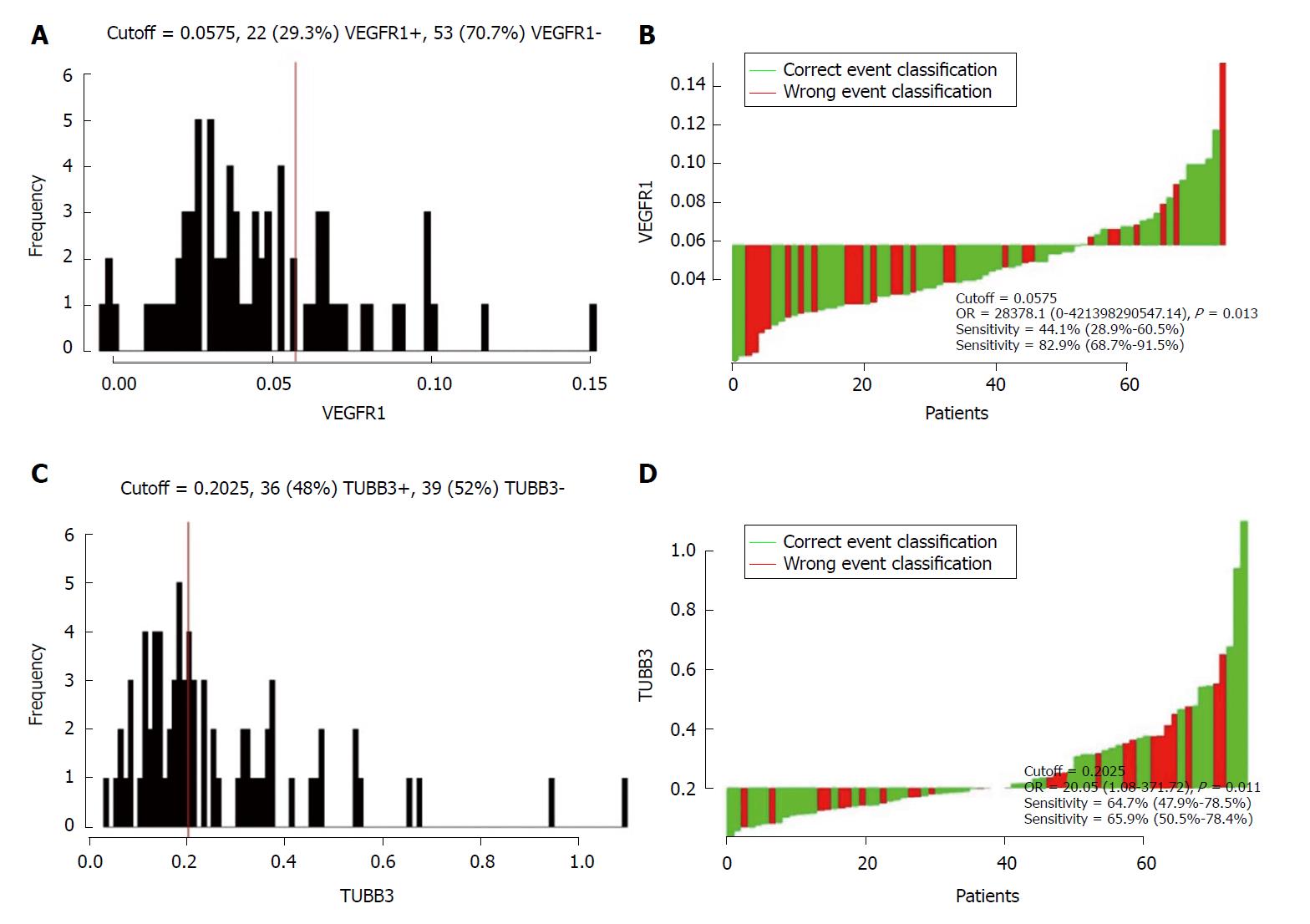 The correlations between VEGFR1/TUBB3 mRNA expression and clinicopathological features were analyzed (Table 2). A majority of the patients displayed positive lymph node metastasis in the high-expression group of VEGFR1 (P = 0.013). However, no significant difference was found between the expression level of TUBB3 expression and clinicopathological features (gender, age, pre-CEA, pre-Hb, distance to the verge, T stage, lymph node metastasis and venous invasion, all P > 0.05).

Impact of VEGFR1 and TUBB3 on OS 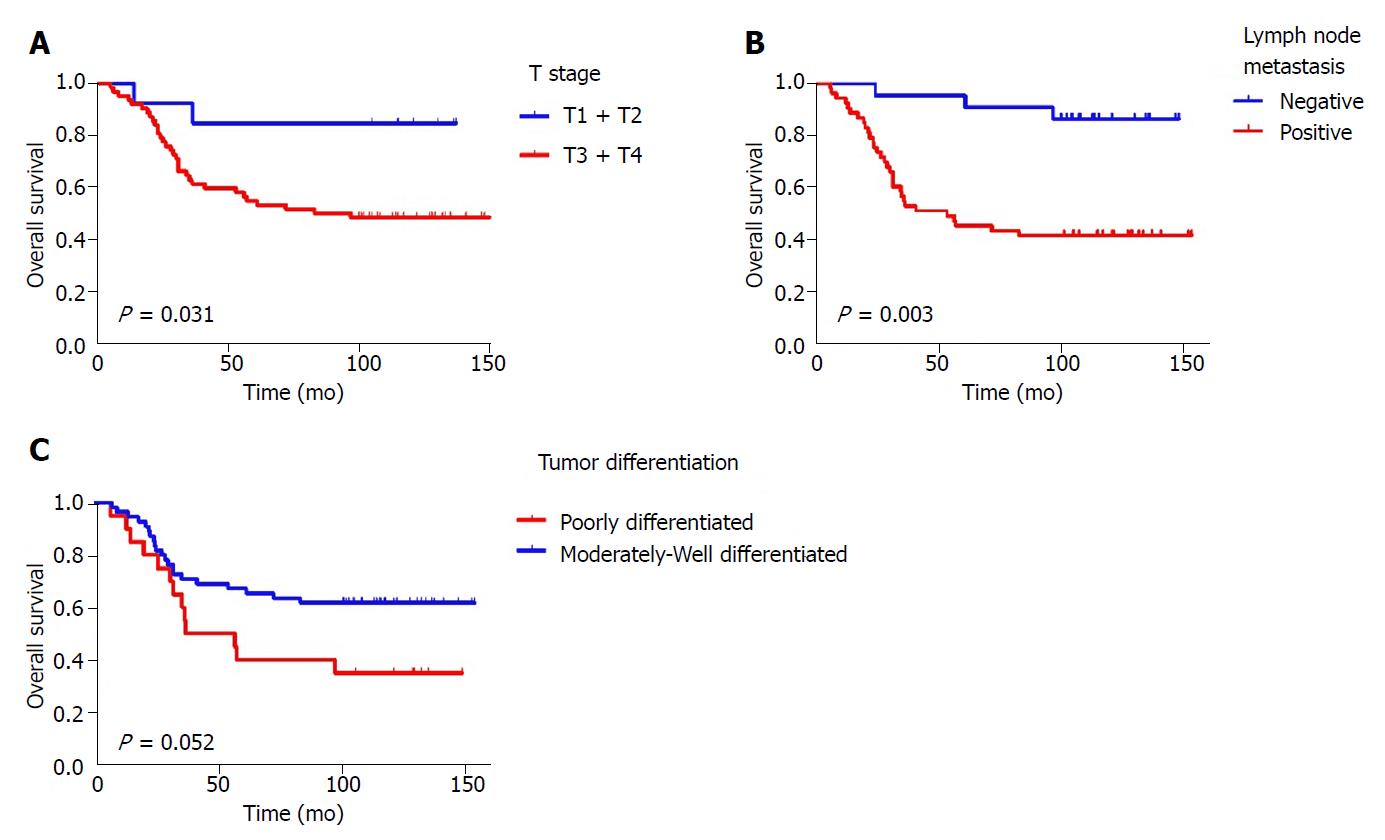 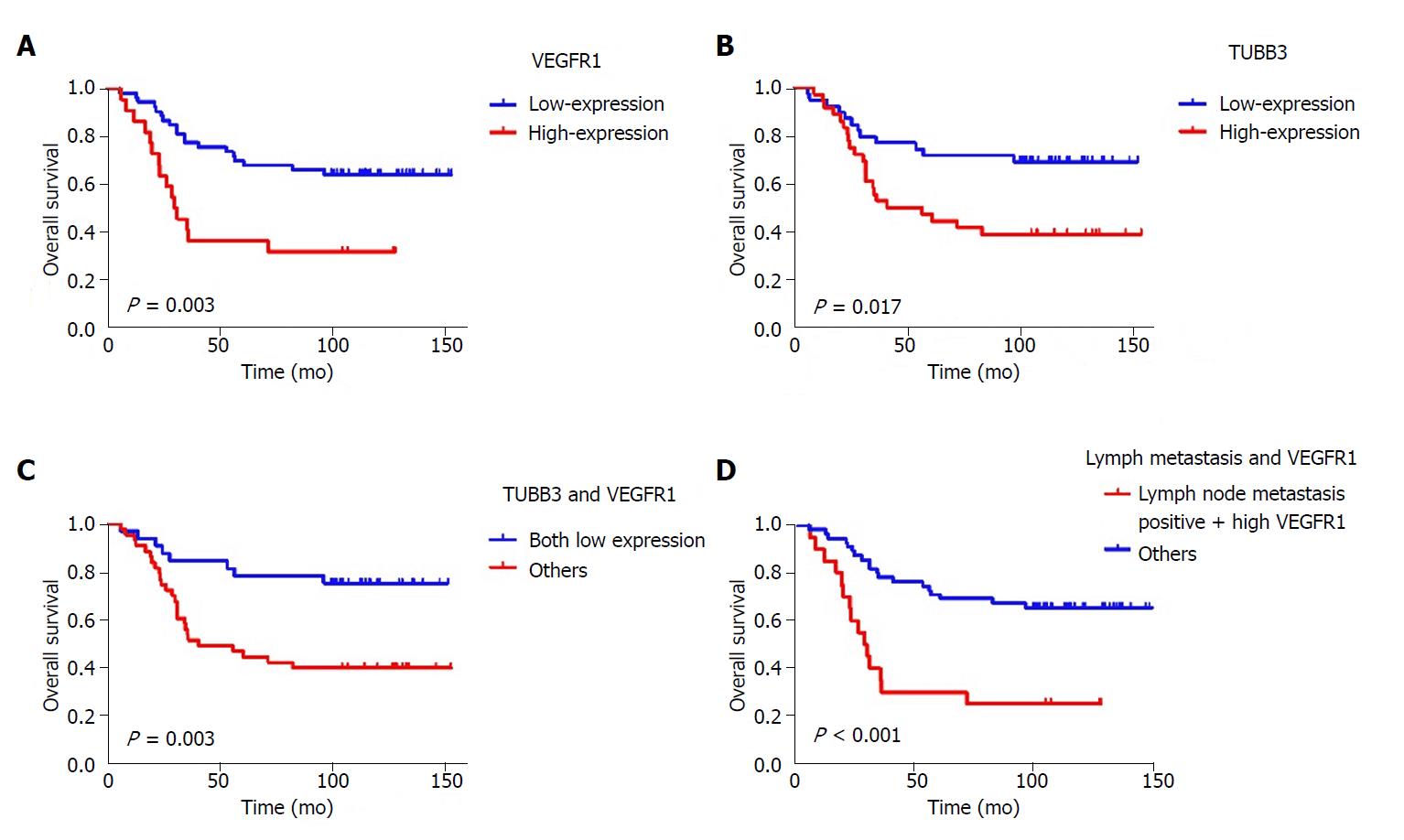 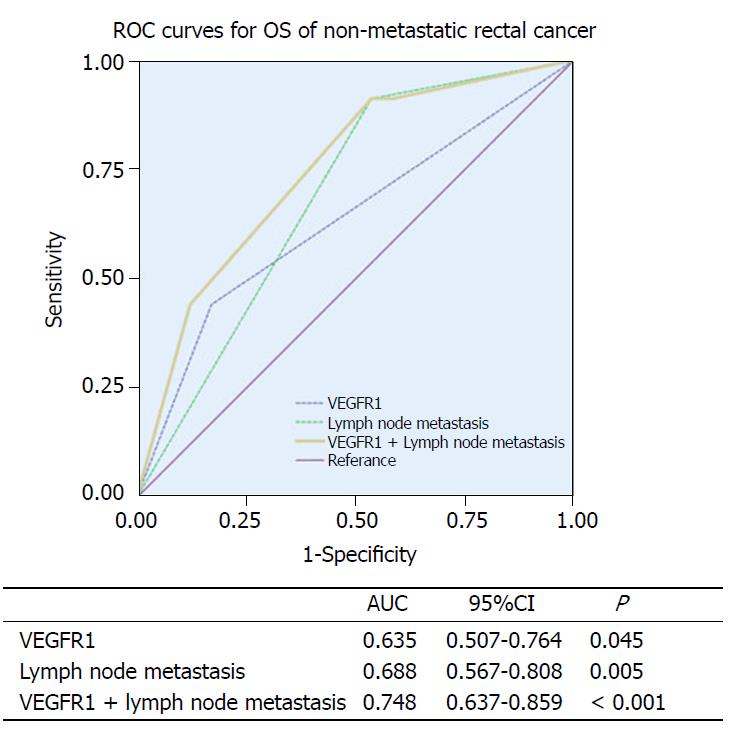 Reportedly, VEGFR correlates with poor prognosis, metastasis, and recurrence in various tumor types, including breast and lung cancers[14,15]. Moreover, previous studies demonstrated that VEGF plays a crucial role as a potent angiogenic factor in both experimental and human studies with respect to colorectal cancer progression and metastasis[16-18]. The co-expression of VEGF and VEGFR1/2 in the nucleus stimulates the proliferation and migration of endothelial cells, thereby providing nutrition for growing tumors and establishing a continuity between tumor cells and host vasculature[19].

VEGFR1 is primarily localized in the nucleus of endothelial cells; As the predominant receptor of the tumor microenvironment, it is essential for the survival of endothelial cells[20]. Tsai et al[21] reported that the overexpression of VEGF is a significant positive predictor for early postoperative relapse in stage I-III colorectal cancer patients, leading to poor OS (P = 0.002). Similarly, Nriagu et al[22] reported that the overexpression of VEGF mRNA was an independent factor affecting OS as assessed by multivariate analysis (HR = 1.94, P = 0.005). Herein, we found that the low expression of VEGFR1 might positively affect OS with a 5-year OS of 69.8% for low vs 36.4% for the high-expression group (HR = 2.151, P = 0.033). These results indicated that VEGFR1 functions as a positive regulator of angiogenesis[23], which might lead to poor survival in cancer patients.

A retrospective study reported that VEGF expression could identify an unfavorable subgroup of patients with stage II colon cancer for optimal treatment strategy (the recurrence rate was 50% for VEGF-positive vs 11.7% for VEGF-negative, P = 0.001)[26]. As shown by ROC curves in our analysis, though low sensitivity of VEGFR1 (44.1%), the specificity was high with 82.9%, which exerted a similar effect on prognosis as lymph node metastasis. Moreover, the sensitivity increased when combined with lymph node status, and a superior prognostic value was noted for the combination. Further identification of a group of lymph node metastasis-positive with high VEGFR1 expression allows for selective treatment with adjuvant chemotherapy using antiangiogenic therapy, including VEGFR1 antisense and monoclonal antibodies, as well as postoperative follow-up.

Several clinical studies demonstrated that the increased expression of TUBB3 in various human malignancies was related to low response rate and poor survival in patients treated with taxane-based chemotherapies[27-30]. However, studies focusing on the relationship between TUBB3 and non-metastatic rectal cancer are limited. The current study showed that the low expression of TUBB3 had better OS in non-metastatic rectal cancer patients as assessed by univariate analysis (5-year OS, 71.8% vs 47.2%), although no significant difference was observed by multivariate analysis.

Furthermore, Makarchenko et al[31] and Widow et al[32] reported that VEGFR1 regulated the chemo-resistant genes such as TUBB3, which might result in the poor prognosis of lung and gastroesophageal cancers. The current study established a positive correlation between VEGFR1 and TUBB3 (r = 0.315, P = 0.006), and a favorable OS was observed in both low expression groups (P = 0.003). Paradiso et al[33] had investigated the combination of TUBB3 and VEGFR1 in advanced breast cancer. Hypoxia in the tumor microenvironment promotes angiogenesis, and VEGFR1 is known to be related to angiogenesis[23]. TUBB3 was found to be involved in an adaptive response to low oxygen levels and poor nutrient supply in solid tumors[34,35]. Therefore, we speculate that the underlying mechanism of the two correlations might be related to anoxic environments.

Notably, this study was limited to a small-sample retrospective analysis. Thus, additional mRNA expression data might help to establish a superior predictor. Finally, prospective data and large sample size are essential for further substantiation of the results.

We confirmed that the increased expression of VEGFR1 and TUBB3 might be negatively correlated with long-term prognosis of non-metastatic rectal cancer. Furthermore, VEGFR1 expression and lymph node metastasis affected the survival independently as well as synergistically. These results might provide additional prognostic information compared to the conventional tumor histopathological factors.

Rectal cancer is one of the most common form of cancer in both men and women. Gene expression profiling for predicting the response and long-term prognosis of malignancies has been reported in recent decades. Vascular endothelial growth factor (VEGF) and class III β-tubulin (TUBB3) have been reported to play a vital role in cancer progression. However, few studies focused on their role in rectal cancer.

We try to explore the potential prognostic value of VEGFR1 and TUBB3 for long-term survival in non-metastatic rectal cancer.

A total of 75 patients diagnosed with primary rectal adenocarcinoma without metastases were retrospectively analyzed.

Multiplex branched DNA liquidchip technology was applied to detected mRNA expressions of VEGFR1 and TUBB3. The cutoff point of mRNA expression was determined by Cutoff Founder.

VEGFR1 expression was positively correlated to TUBB3. Patients with both low expression of TUBB3 and VEGFR1 presented a better overall survival (OS). In addition, VEGFR1 and lymph node metastasis had potential as prognostic factors for OS in non-metastatic rectal cancer patients, and the combination of them showed a favorable prognostic value.

We confirmed that the increased expression of VEGFR1 and TUBB3 might be negatively correlated with long-term prognosis of non-metastatic rectal cancer. Furthermore, VEGFR1 expression and lymph node metastasis affected the survival independently, as well as synergistically. These results might provide additional prognostic information compared to the conventional tumor histopathological factors.

VEGFR1 has the potential to contribute to decision making regarding individual treatment in rectal cancer. A larger sample size and additional mRNA expression data are warranted to establish a superior prognosis model.