Endoscopic ultrasonography (EUS) was performed on a patient being treated for chronic pancreatitis because a submucosal tumor was observed in the stomach during gastrointestinal endoscopy. As internal pulsatile blood flow on Doppler was present, the diagnosis of an aneurysm was made. The pseudoaneurysm of the left gastric artery was embolized with histoacryl and lipiodol and the splenic artery was embolized with coils at the location of the pseudoaneurysm to prevent hemorrhage. Follow up EUS confirmed the cessation of blood flow from the pseudoaneurysm. Clinicians encountering a gastric submucosal tumor-like protrusion in a patient with chronic pancreatitis should use EUS to investigate the possibility of a pseudoaneurysm, which must be treated as quickly as possible once identified.

We herein describe a patient with chronic pancreatitis who was diagnosed with a pseudoaneurysm of the left gastric artery while undergoing endoscopic ultrasonography (EUS) for a gastric submucosal tumor-like protrusion.

The patient, a 39-year-old male, presented with the primary complaints of chest tightness and upper abdominal pain. Previously, the patient had been repeatedly admitted and discharged for alcoholic pancreatitis. An approximately 4 cm, left mediastinal, cystic lesion continuing from the tail of the pancreas was seen on multidetector row computed tomography (MDCT) at the time of presentation. An area of high density was observed within the cyst, and a severely atrophied pancreas with a calcified body was observed (Figure 1). As a pseudocyst complicating an acute exacerbation of chronic pancreatitis and hemorrhage in the pseudocyst was suspected, it was suggested that the patient be admitted for a detailed examination. However, the patient, refused to be admitted for a detailed examination as recommended, and returned home. Later, when his symptoms progressively worsened and his stool had been black for 1 wk, he was rushed to the hospital. 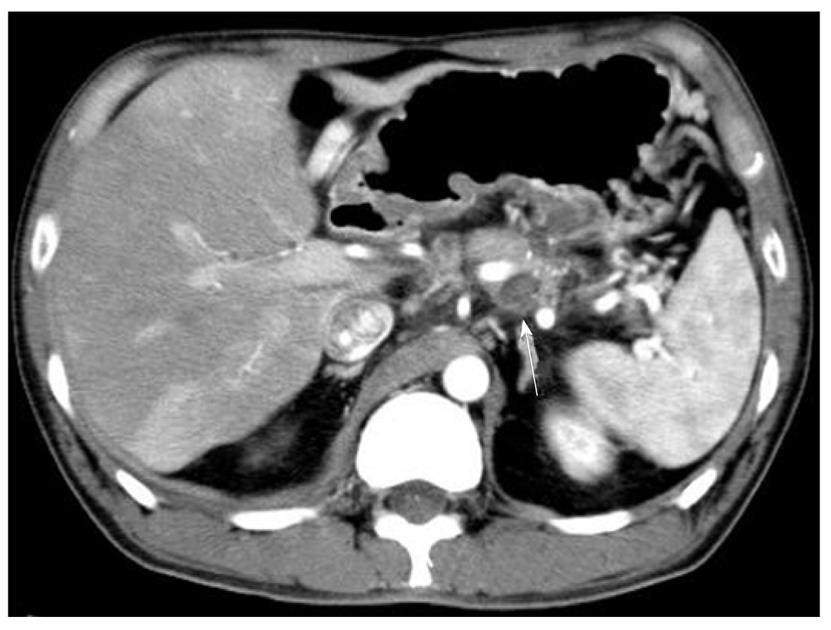 Figure 1 Abdominal computed tomographic findings. A severely atrophied pancreas with a calcified body was noted. The pseudocyst (arrow) ranged from the back of the pancreas to the left mediastinum and was adjacent to the splenic artery.

At the time of admission, his blood pressure was 105/60 mmHg, his pulse was regular at 90 bpm, and his temperature was 37.2 °C. The patient’s abdomen was soft, flat, and slightly distended, with mild tenderness in the upper abdomen. The laboratory findings were as follows: marked anemia with hemoglobin of 7.2 g/dL, amylase of 262 IU/L, mildly elevated pancreatic enzymes with lipase of 109 IU/L, and an inflammatory response with C-reactive protein of 4.76 mg/dL. Following admission, 4 units of packed red blood cells were transfused to treat anemia. Endoscopic retrograde pancreatography (ERCP) was performed to further investigate and treat the pseudocyst. Pancreatography revealed stenosis of the principal pancreatic duct at the head, dilation of the duct at the tail, and a communication between the tail duct and the pseudocyst (Figure 2). Therefore, the pancreatic duct was stented (stent size, 7 Fr, 7 cm). Although no substantial bleeding in the upper gastrointestinal tract was seen during ERCP, upper gastrointestinal endoscopy was performed to investigate the marked anemia which was present on admission. Endoscopy revealed a 2 cm protrusion resembling a submucosal tumor in the lesser curvature of the middle of the body of the stomach (Figure 3). EUS using the GF-UE260-AL5 (Olympus, Tokyo, Japan) and Prosound α10 (Aloka, Tokyo, Japan) was performed for diagnosis. On EUS, a 1 cm submucosal anechoic region whose entire periphery was hypoechoic was seen. The pulsating anechoic mass with Doppler signal enhancement identified in the gastric submucosa was diagnosed as an aneurysm with hematomas around the periphery (Figure 4A). Angiography proceeded, and a 1 cm pseudoaneurysm of the left gastric artery and a large pseudoaneurysm of the splenic artery measuring 2 mm in diameter were detected. Hemorrhage was prevented with transluminal embolization using lipiodol and histoacryl because a small aneurysm was observed in the left gastric artery upon angiography. This was embolized with coils as a pseudoaneurysm measuring 2 mm was further observed in the splenic artery (Figure 5). 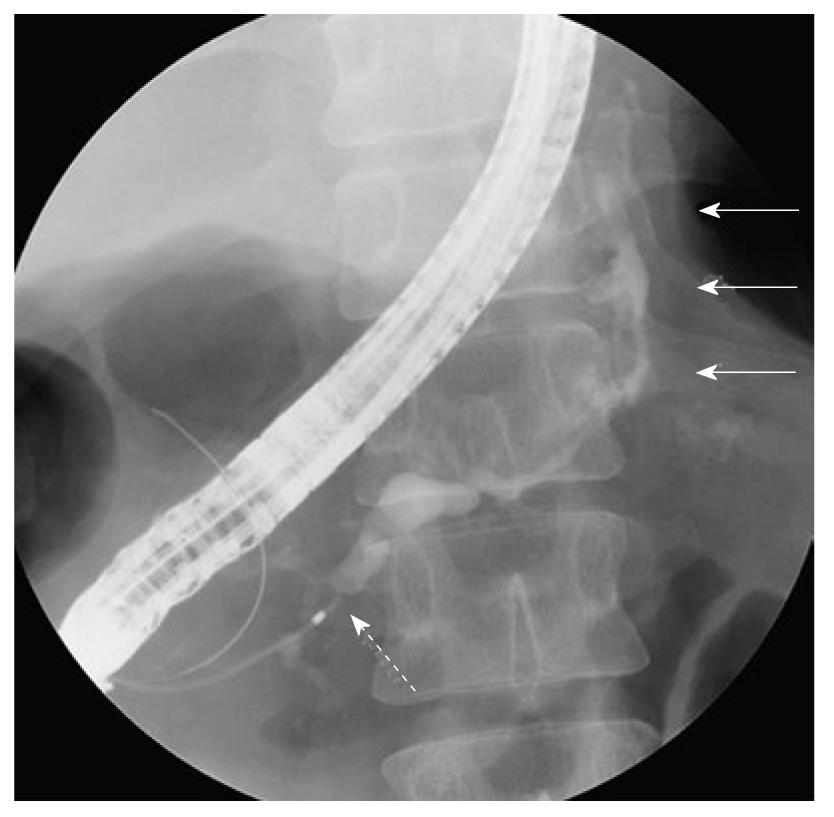 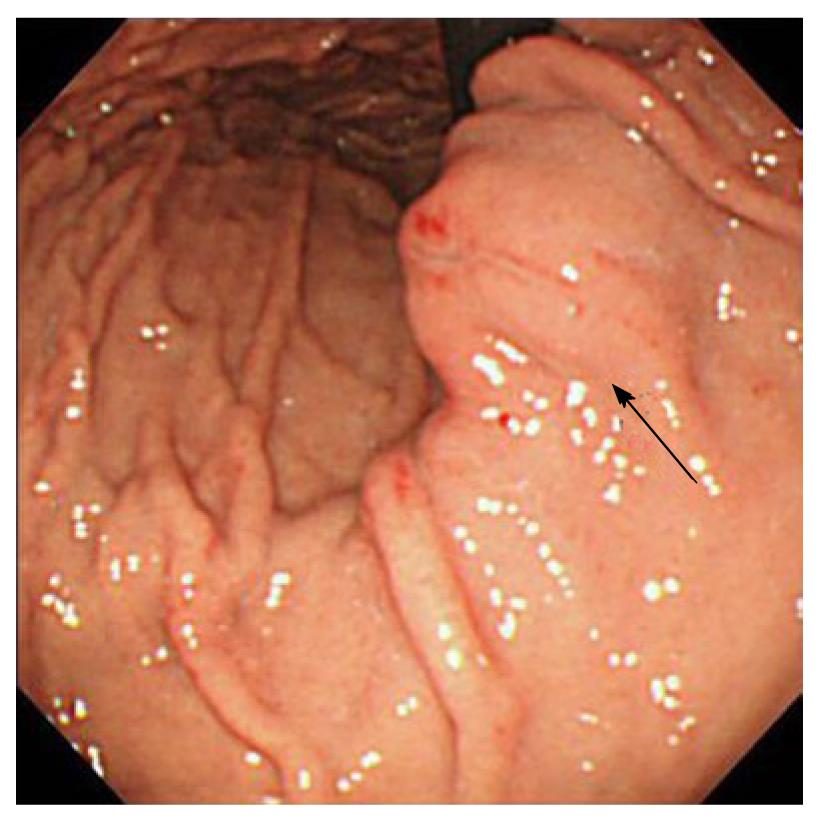 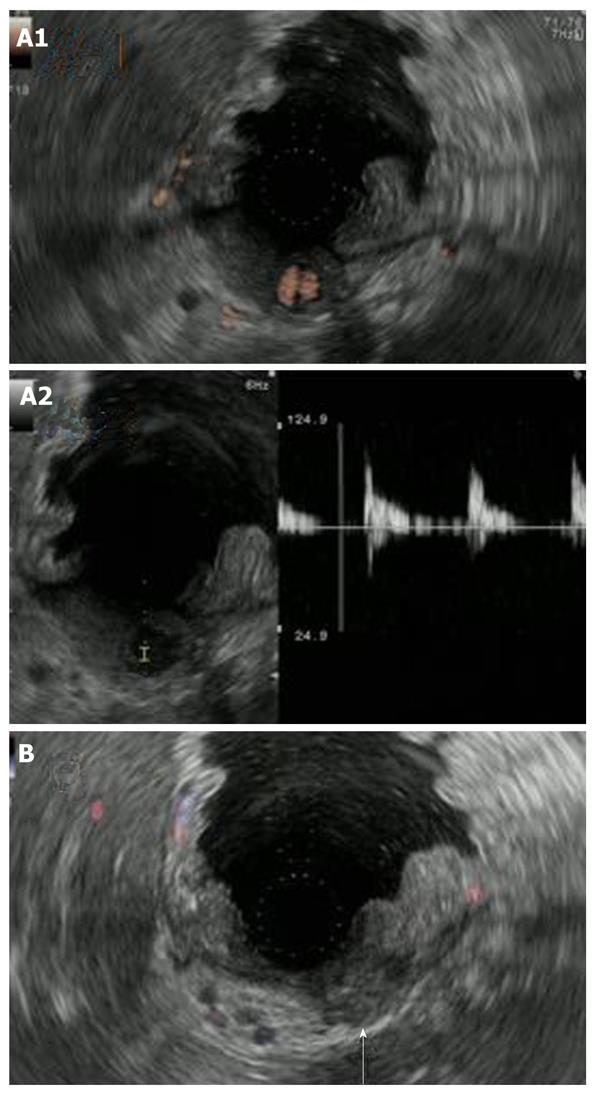 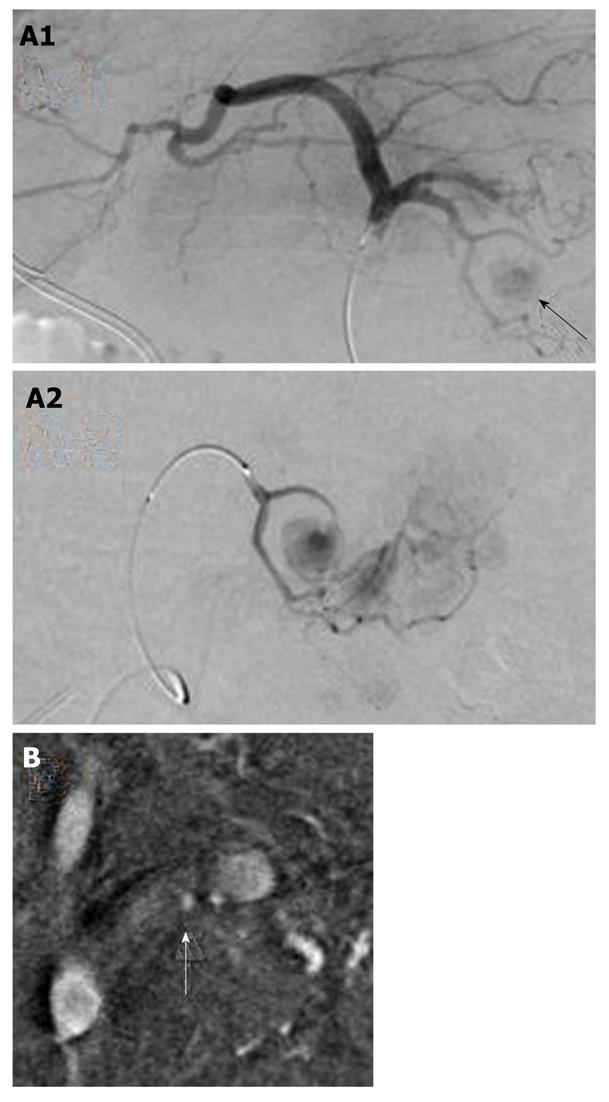 Cessation of blood flow to the pseudoaneurysm was confirmed on EUS performed 1 wk later (Figure 4B). Since there was no subsequent bleeding, follow-up MDCT was performed 1 mo later. The left mediastinal pseudocyst had shrunk markedly.

Hemorrhage in the pseudocyst was seen on MDCT at the time of presentation and ERCP performed after admission revealed a communication between the tail duct and the pseudocyst. It is thought that the splenic pseudoaneurysm was bleeding into the pseudocyst because the splenic artery was adjacent to the pseudocyst on MDCT. No bleeding from Vater’s papilla was observed when carrying out ERCP, but it was presumed that hemosuccus was the cause of this bleeding as the patient had black stool in the week preceding admission and was markedly anemic upon admission. The resulting progress of anemia triggered the discovery of a pseudoaneurysm in the left gastric artery which was on the verge of rupturing.

Although a pseudoaneurysm complicating chronic pancreatitis occurs relatively infrequently and affects only 6% to 9% of patients[1], 40% to 60% of ruptured pseudoaneurysms result in a fatal outcome[2]. Pseudoaneurysms are primarily attributed to the digestion and lysis of the arterial wall near the pancreas by errant activated pancreatic enzymes[3]. The splenic artery is the most commonly affected site. Pseudoaneurysms also frequently form in the gastroduodenal, pancreaticoduodenal, and hepatic arteries, but rarely in the left gastric artery[4,5]. Aneurysms of the left gastric artery mimicking a gastric submucosal tumor are also extremely rare[2,4].

The MDCT examination performed on admission may have missed the aneurysm because the lesion was small or because collateral circulation attributable to pancreatitis-induced pancreatic arteriovenous occlusion resulted in the imaging of many winding blood vessels which, in turn, complicated the identification and diagnosis of the aneurysm. EUS, which can show the gastric wall in fine detail, is an excellent tool for diagnosing gastric submucosal lesions[6]. The added Doppler functionality of the particular EUS device used in the present case made the device better suited than MDCT for diagnosing and following small aneurysms resembling submucosal tumors.

Recently, higher rates of detection have been related to the increased frequency of imaging studies such as EUS[5]. A search of the literature revealed only this case and 8 other cases of submucosal tumor-like protrusions diagnosed as pseudoaneurysms on EUS[2,7-10]. The responsible vessel was the splenic artery in 6 cases and the left gastric artery in 3. The submucosal tumor-like lesion was often located in the fundus or cardiac area (7 of 9) and posterior wall (7 of 9). Two of the patients had chronic pancreatitis, one had alcoholic cirrhosis, one had arteriosclerosis, and five had no underlying disease. The lesions were coincidentally discovered during upper gastrointestinal endoscopic screening in four of these patients. Three of the patients had gastrointestinal bleeding that was treatable with either embolization or surgery (Table 1).

The danger of re-bleeding after embolization increases if pancreatitis continues even following treatment, but we believe that we were able to successfully control bleeding by avoiding stent implantation in the pancreatic duct and by avoiding bleeding. A pseudoaneurysm should be suspected when a gastric submucosal tumor-like protrusion is seen in a patient with chronic pancreatitis. We recommend that EUS be carried out, and if a pseudoaneurysm is diagnosed, then interventional radiology should be performed as soon as possible. In addition, the successful control of pancreatitis was believed to be the key to successful bleeding control.