Upper gastrointestinal hemorrhage (UGIH) is an urgent disease that is often encountered in daily medical practice. Endoscopic hemostasis is currently indispensable for the treatment of UGIH. Initially, when UGIH is suspected, a cause of UGIH is presumed from the medical interview and physical findings. After ample primary treatment, urgent endoscopy is performed. Many methods of endoscopic hemostasis are in wide use, including hemoclip, injection and thermo-coagulation methods. Although UGIH develops from a wide variety of diseases, such as esophageal varices and gastric and duodenal ulcer, hemostasis is almost always possible. Identification of the causative diseases, primary treatment and characteristic features of endoscopic hemostasis are needed to allow appropriate treatment.

Patients with UGIH present with various symptoms, such as hematemesis, melena and progressive anemia. Sources of bleeding other than the digestive tract must first be excluded, including hemoptysis, epistaxis, and discrimination of lower digestive hemorrhage[10]. Table 1 shows causative diseases for UGIH. Peptic ulcer is the most common causative disease[1,6,11,12]. When UGIH is suspected, causes of UGIH may be presumed from the medical interview and physical findings. The strategy for hemostasis of UGIH with primary treatment is then considered.

A firm grasp of the systemic status is important. Signs of shock, pallor, prostration, perspiration, pulselessness and pulmonary insufficiency suggest massive digestive hemorrhage. Above all, stabilization of the circulatory dynamic state by intravenous injection of extracellular fluid is crucial[10]. In addition, an inhibitor of gastric acid-secretion should be given as quickly as practically possible, as gastric acid inhibits blood coagulation[13]. If massive hemorrhage is suspected from gastroesophageal varices in patients with liver disease, vasoactive drugs (such as terlipressin, somatostatin and octreotide) should be started for initial management before therapeutic endoscopy[14,15]. Temporary balloon tamponade, such as Sengstaken-Blakemore tubes, must be used with care to prevent further complications[16,17]. If coagulopathy is present, transfusion is necessary. When the circulatory dynamic state is stable and UGIH has been judged as a cause of shock, urgent endoscopy is performed.

The methods of endoscopic hemostasis are shown in Table 2. Hemostasis can be performed using independent or combined methods. The hemoclip grips the exposed blood vessel directly and stops bleeding. Destruction of organization is minimal, and hemostatic ability is high[18]. However, this method requires technical skill to maintain a front view of the exposed blood vessel. When difficulty is encountered, a transparent cap can prove useful[19].

Injection methods are effective over a wider range than the hemoclip method, and can be used even if a front view of the bleeding point cannot be maintained. A combination of injection method and other methods is even more effective[20]. However, careful attention is required, due to the risk of delayed perforation.

Thermo-coagulation methods are also effective if a front view of the bleeding point cannot be maintained. These techniques are useful in many cases[21,22], but again carry the possibility of delayed perforation.

As the last method, hemostyptic sprays are used as supplementary treatments[20]. Various methods of hemostasis are selected by adjusting to the individual’s condition.

Esophageal varices are frequent in patients with liver cirrhosis. If bleeding from the esophageal varices continues, endoscopic balloon tamponade can be effective for stopping bleeding. Next, endoscopic variceal ligation (EVL) is generally used at the bleeding point (Figure 1A and B). After temporary hemostasis, aiming toward permanent hemostasis is desirable.

In the EVL method, application of the bands is started at the gastroesophageal junction and progresses cephalad in a helical fashion. EVL sessions are repeated at approximately 2-wk intervals until varices are obliterated, usually requiring 2 to 4 ligation sessions. EVL is a safer method than endoscopic injection sclerotherapy (EIS)[23]. When technical factors, such as ulcer scars, do not allow ligation band placement, EIS is selected.

In EIS, to prevent variceal recurrence, complete obliteration of feeder vessels should be verified under fluoroscopy (Figure 2A-C)[24]. Also, combined EVL and EIS treatment is reportedly superior to a single method[25,26].

Recently, bacterial infections and/or endotoxaemia have been associated with failure to control variceal bleeding, earlier variceal rebleeding, abnormalities in coagulation, vasodilatation of the systemic vasculature, and worsening liver function[27]. Prophylactic antibiotics are recommended for patients with bleeding varices[28].

There are no clear hemostasis options as salvage for failure of endoscopic therapy. A transjugular intrahepatic portosystemic shunt (TIPS) procedure is effective to prevent variceal rebleeding, but it may cause complications such as portosystemic encephalopathy[29,30]. Despite being an invasive procedure, a portocaval shunt operation is one of the effective choices in patients with Child’s A or B. Patients with Child’s B or C cirrhosis should be evaluated for transplantation[23,31].

Gastric and duodenal ulcers include various ulcers such as peptic ulcer, ulcers associated with use of non-steroidal anti-inflammatory drugs (NSAIDs) and Dieulafoy’s lesion. All of these ulcers can cause UGIH, which then needs treatment.

Previous studies have clarified adaptations of hemostasis for hemorrhagic ulcer. Table 3 shows the modified Forrest classification for hemorrhagic gastric ulcer[1,39] Adaptation is decided according to the state of the exposed blood vessel at the base of the ulcer[40-42]. Specifically, spurting bleeding (Figure 3A), oozing bleeding (Figure 3B) and non-bleeding visible vessels (Figure 3C) need to be treated. Clot clinging to the ulcer base should be carefully removed by washing, suction and forceps until the ulcer base is visible. Ulcers can be treated with independent or combined methods. As each method offers certain characteristic features, discussing the advantages and disadvantages of these methods is difficult[43,44]. In previous reports, a combination of injection methods with other methods has appeared superior to injection methods alone[44-49]. Dieulafoy’s lesion can be treated with these endoscopic hemostasis methods[50,51]. Acute gastric mucosal lesions apply to gastric ulcers.

After temporary hemostasis, systemic second-look endoscopy with retreatment the next day significantly reduces the risk of recurrent bleeding[52]. Administration of a proton pump inhibitor (PPI) after hemostasis is also important[53] and Helicobacter pylori should be eradicated in peptic ulcers showing positive results for this bacteria[54].

Endoscopic hemostasis for severe upper gastrointestinal bleeding due to tumor, such as cancer, gastrointestinal stromal tumor, and malignant lymphoma, is effective as temporary hemostasis[55]. Argon plasma coagulation is useful, in particular, for different cases of identification of the vessel responsible for the bleeding[56,57]. However, permanent hemostasis is difficult in many cases due to diffuse bleeding. Early consultation with a surgeon is warranted in cases where hemostasis is difficult to achieve.

Mallory-Weiss syndrome heals spontaneously in many cases, but endoscopic therapy is occasionally necessary to stop bleeding. Various methods have been reported, such as Hemoclip placement, epinephrine injection and band ligation[58,59].

The few cases of reflux esophagitis requiring endoscopic hemostasis are treated with a PPI, and most cases heal with conservative therapy. However, when an anticoagulant drug is being administered or bleeding tendencies exist, chronic bleeding can continue. These cases must be treated by addressing the bleeding tendency[60].

Hyperplastic polyps of the stomach are usually asymptomatic, but can cause UGIH leading to anemia. The majority of such lesions are benign, but when a polyp exceeds 2 cm in maximum diameter, the frequency of focal cancer increases. Pathological diagnosis of large polyps is thus desirable[64].

Duodenal diverticulum is a rare cause of UGIH, and endoscopy is reportedly useful for diagnosis and treatment of this condition[65]. Patients receive various endoscopic therapies, such as thermo-coagulation, injection, and hemoclip. The point of the hemoclip method is to grasp a vessel, diverticulum and other tissue (Figure 4A and B). 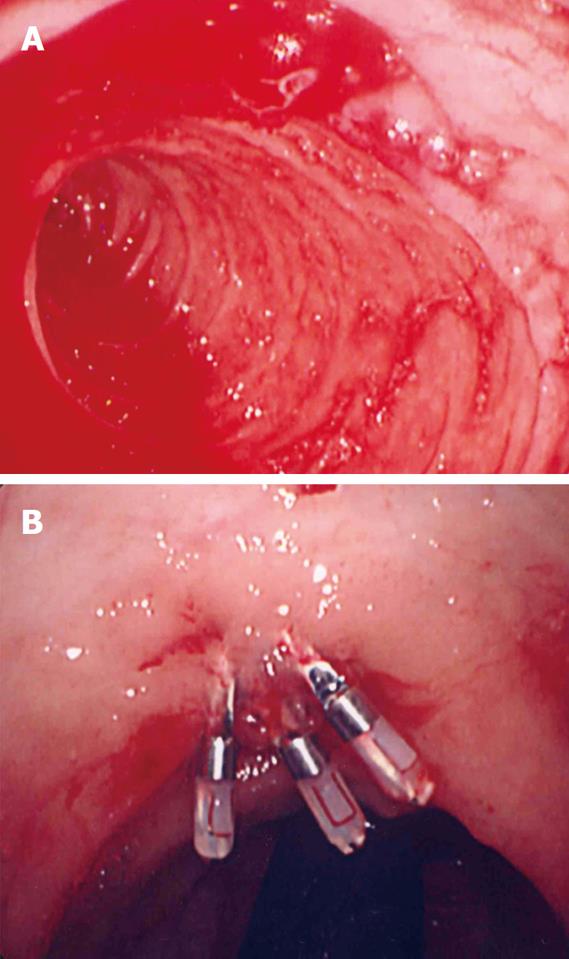 Figure 4 Duodenal diverticulum. A: Hemorrhage; B: After endoscopic hemostasis.
CONCLUSION

We have provided an outline of endoscopic hemostasis for UGIH. For the digestive endoscopist, endoscopic hemostasis is a field that cannot be avoided. Being prepared to take proper measures is important. As the causes of UGIH differ in various patients, knowledge of UGIH including causes and preferred treatments requires constant attention.