Giant cell tumors of the pancreas come in three varieties-osteoclastic, pleomorphic, and mixed histology. These tumors have distinctive endoscopic, clinical, and cytological features. Giant cell tumors have a controversial histogenesis, with some authors favoring an epithelial origin and others favoring a mesenchymal origin. The true origin of these lesions remains unclear at this time. These are also very rare tumors but proper identification and differentiation from more common pancreatic adenocarcinoma is important. The risk factors of these tumors and the prognosis may be different from those associated with standard pancreatic adenocarcinoma. Recognition of these differences can significantly affect patient care. These lesions have a unique appearance when imaged with endoscopic ultrasound (EUS), and these lesions can be diagnosed via EUS guided Fine Needle Aspiration (FNA). This manuscript will review the endoscopic, clinical, and pathologic features of these tumors.

Giant cell tumors of the pancreas have distinctive endoscopic, clinical, and cytological features. Giant cell tumors have a controversial histogenesis, with some authors favoring an epithelial origin and others favoring a mesenchymal origin. The true origin of these lesions remains unclear and difficult to evaluate due to the rarity of the tumor. The risk factors of these tumors and the typical prognosis may be different from those associated with pancreatic adenocarcinoma. Recognition of these differences can affect patient care. These lesions have a distinct appearance when imaged with endoscopic ultrasound (EUS) as compared to typical pancreatic adenocarcinomas, and these lesions can be diagnosed via EUS- guided Fine Needle Aspiration (FNA). This paper will review the endoscopic, clinical, and pathologic features of these tumors.

Pancreatic cancer is the second most common gastrointestinal malignancy. The majority of patients with pancreatic masses develop adenocarcinoma[1]. Giant cell tumors (GCT) are rare pancreatic tumors, accounting for less than 1% of all pancreatic malignancies[2]. There are few reported cases of either of these tumors in the published literature, with most authors reporting only one patient at a time[2-5].

Virtually all reported giant cell tumors of the pancreas have been diagnosed via surgery[2-5]. Our group has previously reported a series of five patients with GCT, diagnosed via endoscopic ultrasound (EUS) with fine needle aspiration (FNA), demonstrating the efficacy of the technique in this setting[7]. This represents the largest single institution series of patients with GCTs to date.

Giant cell tumors have a controversial histogenesis, with some authors favoring an epithelial origin and others favoring a mesenchymal origin[4,7]. The true origin of these lesions remains unclear and difficult to evaluate due to the rarity of the tumor.

Giant cell tumors of the pancreas are considered a rare variant of adenocarcinoma, and currently are histopathologically classified as “undifferentiated carcinoma with osteoclast-like giant cells” by the World Health Organization[10]. Some authors have divided GCT further into two distinct types[11]. Osteoclastic-giant cell tumors are neoplasms dominated by benign-appearing osteoclast-like giant-cells closely resembling conventional giant-cell tumor of bone[12]. (Figure 1A and B) Pleomorphic giant-cell tumor is a highly anaplastic malignancy with bizarre pleomorphic mononucleated and multinucleated giant-cells. (Figure 2A). This tumor usually lacks the osteoclast-like giant-cells but contains a prominent population of pleomorphic multinucleated giant-cells. (Figure 2B) Both types of GCT have bizarre mononuclear cells of oval, polygonal, or spindle morphology.

A small number of neoplasms showing a mixture of OGCT and PGCT patterns have been reported[13]. Distinction of true OGCT of the pancreas from PGCT has not always been clearly documented and overlap of descriptions of these neoplasms appears to exist in the pathology literature. This may in part be due to the fact that hybrids of the two tumors have been reported histologically.

Little data is available on the CT or MRI appearance of these lesions and no published studies have been specifically dedicated to the appearance of these lesions on imaging. Leighton and Shum describe one case of an OGT appearing as a large, proteinaceous, fluid-filled cyst with a mural nodule upon imaging, but this appears to be an unusual appearance of a GCT[23]. In our experience, these lesions tend to mimic more typical pancreatic adenocarcinomas except for the fact that they tend to be larger, with sizes of the primary tumor of 5-6 cm or greater. The EUS appearance of GCT differs from typical pancreatic adenocarcinoma[7]. The echotexture of these tumors tends to be markedly heterogeneous with well demarcated hyperechoic and hypoechoic areas closely opposed within the same lesion. (Figure 3) This is in contrast to pancreatic adenocarcinomas which are often more uniformly hypoechoic throughout. GCT also appear different than neuroendocrine tumors, which are hypoechoic compared to normal pancreatic tissue, or isoechoic with a hypoechoic ring[24]. Vascular invasion is very typical of pancreatic adenocarcinoma, especially in lesions of the head and body of the gland[25]. Head lesions in adenocarcinoma tend to involve the superior mesenteric vein or the portal vein, while body lesions tend to involve the celiac artery and superior mesenteric artery. In our series, no patients had any vascular involvement, a highly unusual finding for patients with large, bulky pancreatic tumors. Three patients in our series had malignant lymph nodes on diagnosis, in contrast to reported literature which tend to find an absence of malignant adenopathy[2,11]. 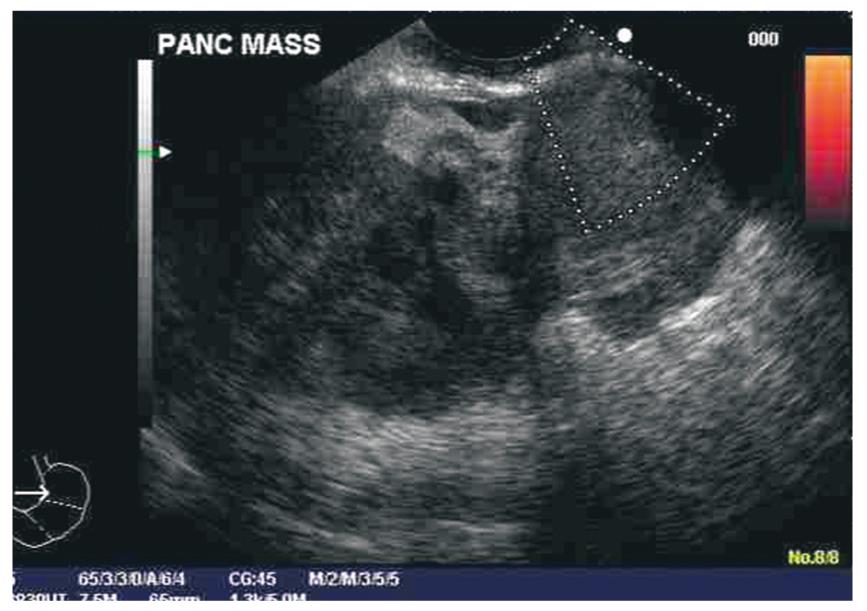 Figure 3 EUS image of a patient with an osteoclastic giant cell tumor of the pancreas. Note large size of mass and heterogeneous echotexture.
CLINICAL COURSE AND DISCUSSION

OGCT of the pancreas are less aggressive and may confer a better prognosis when compared to either pancreatic adenocarcinoma or PGCT[11,26,27]. Osteoclastic giant cell tumors may metastasize more slowly. Reported series note fewer patients with metastases at the time of diagnosis[11,26,27]. OGCT may have a better response to surgical resection and/or chemotherapy[28]. In our series we identified unique clinical and pathologic features[7]. All five patients were diagnosed via EUS FNA. None of these tumors had any vascular involvement although three patients had malignant adenopathy identified on EUS. It is thought that PGCT behaves like pancreatic adenocarcinoma, with a similarly poor prognosis[2]. OGCT have a better prognosis in reported cases when compared to adenocarcinomas[7,8,10,11,29]. Prognosis is challenging to determine as limited outcome data is available in these patients[11].

The published survival data on patients with OGCT varies greatly (4 mo to 15 yr)[8,10,11,29]. It is suggested that the survival difference may be related to variations in histogenic origin, with tumors of mesenchymal origin having a better prognosis when compared to those of epithelial origin[8]. Our series contained five patients, three PGCT, one mixed, one OGCT, and reported variable outcome partially due to histology[7]. The three patients with pleomorphic cytology chose palliative care as their only therapy. These patients died at a mean of 12.3 wk from diagnosis. A single patient with mixed cytology underwent pylorus-preserving pancreaticoduodenectomy 19 d after EUS diagnosis followed by one cycle of gemcitabine (dose unavailable) and Tarceva 100. Shortly thereafter, a PET scan revealed recurrent disease in the pancreas and liver. At last evaluation, this patient was still alive more than 13 mo following their diagnosis. The fifth patient with purely osteoclastic cytology underwent a pancreaticoduodenectomy, segment 2 hepatic segmentectomy and radiofrequency ablation of five liver lesions 17 d after EUS diagnosis, followed by local radiation therapy (37.5 Gray in 15 fractions), as well as six cycles of gemcitabine (700 mg/m2= 1218 mg IV over 70 min on days 1, 8 and 15 of each cycle with dexamethasone 8 mg IV prior to each infusion). This patient was still alive greater than 18 mo from diagnosis.

The pleomorphic form is thought to behave much like pancreatic adenocarcinoma, with a similarly poor prognosis[2]. The published survival data on patients with OGCT varies greatly (4 mo to 15 yr)[10,11,29,30]. It is suggested that the survival difference may be related to variations in histogenic origin, with tumors of mesenchymal origin having a better prognosis when compared to those of epithelial origin[30].

Prognosis in patients with GCT appears similar to that seen in pancreatic adenocarcinoma overall. In our series, three patients died an average of 3.3 mo from diagnosis, one patient was fairly recently diagnosed with recurrent disease but alive thirteen months from diagnosis, and one patient is still alive eighteen months from diagnosis. It is notable that the three deceased patients all had purely pleomorphic histology. The patient with early recurrence had mixed cytology with both pleomorphic and osteoclastic histology. The patient still living without known evidence of disease has purely osteoclastic histology, consistent with previously reported OGCT data[10,11,29,30].

With regards to treatment, there is little published data to guide clinicians. Lesions that appear to be surgically resectable should undergo operative intervention. Some patients with GCT’s have undergone standard chemotherapy and/or radiation therapy as used in pancreatic adenocarcinoma, but no firm guidelines are available.