Specimens from 302 patients who underwent resection for hepatocellular carcinoma between January 2006 and December 2012 were retrospectively analyzed. Based on pathologic findings, patients were divided into groups based on whether or not they had LC. Parameters associated with hepatic functional reserve were compared in these two groups using Mann-Whitney U-test for univariate analysis. Factors differing significantly in univariate analyses were entered into multivariate logistic regression analysis.

The MPV/PLT ratio, which can be determined simply from the complete blood count, may be a simple surrogate marker predicting LC.

Mean platelet volume (MPV) is a machine-calculated measurement of average platelet size, usually included in complete blood count testing. Normal MPV ranges from 7.5 fL to 11.5 fL. Because average platelet size is directly proportional to the numbers of platelets produced, MPV is indicative of platelet production in bone marrow. Moreover, MPV is higher when there is destruction of platelets, as observed in patients with inflammatory bowel disease, immune thrombocytopenic purpura, myeloproliferative diseases and Bernard-Soulier syndrome[1]. MPV may also be higher in patients with pre-eclampsia and those recovering from transient bone marrow hypoplasia[2]. In contrast, abnormally low MPV values are indicative of thrombocytopenia because of impaired platelet production, as observed in patients with aplastic anemia.

Several studies have reported that liver cirrhosis (LC) and fibrosis are related to MPV[3-6]. Increased MPV, as well as decreased platelet count (PLT), were found to reflect a greater degree of fibrosis. These findings suggested that the ratio of MPV to PLT may correlate strongly with the degree of liver fibrosis. This study was, therefore, designed to determine whether liver fibrosis and LC are associated with the MPV/PLT ratio or not.

Comorbidities that could be associated with an increase or decrease in the MPV/PLT ratio, such as inflammatory bowel disease, immune thrombocytopenic purpura, myeloproliferative disease or Bernard-Soulier syndrome, were not observed in any of the patients.

The ROC curves of all six independently predictive factors (MPV/PLT ratio, PT, and concentrations of AST, ALT, total bilirubin and hyaluronic acid) are shown in Figure 1. Calculation of AUC for all six factors showed that the MPV/PLT ratio had the highest AUC (0.78). A cutoff value of 0.8 had a sensitivity of 65% and a specificity of 78% in predicting LC. This ratio was a better predictor of LC than other parameters of hepatic functional reserve. 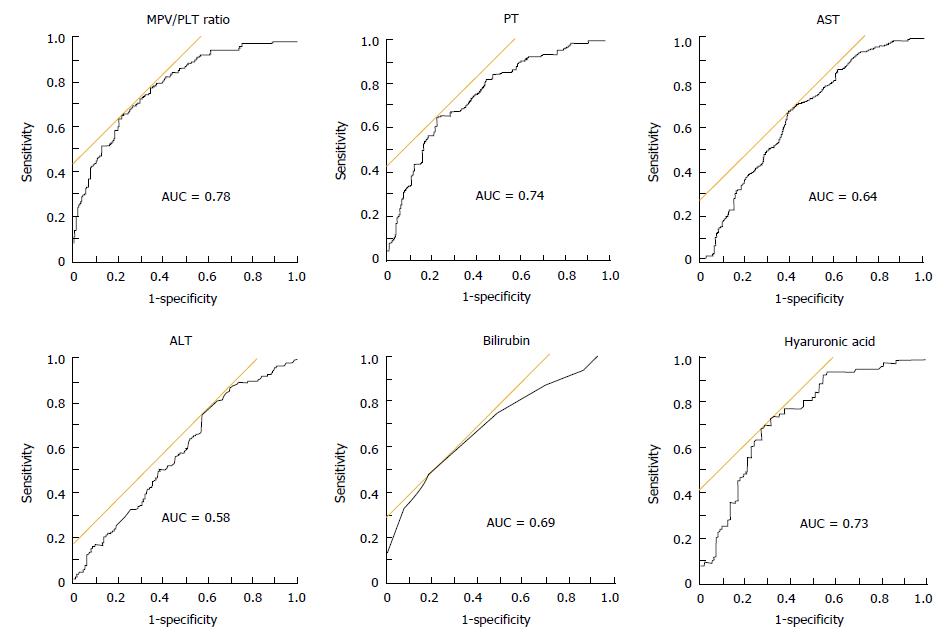 Figure 1 Receiver operating characteristic curve analysis of parameters differing significantly in the liver cirrhosis and non-liver cirrhosis groups on multivariate analysis. The area under the curve of MPV/PLT was the highest. A MPV/PLT ratio of 0.8 had a sensitivity of 65% and a specificity of 78%. MPV/PLT: Mean platelet volume to platelet count; ALT: Alanine aminotransferase; AST: Aspartate aminotransferase; PT: Prothrombin activity. 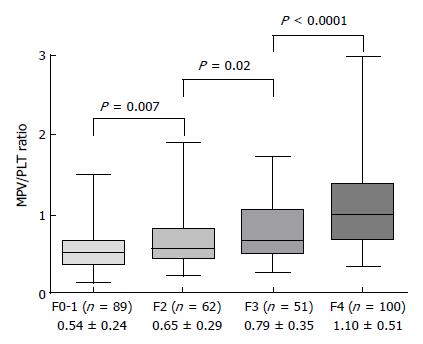 Figure 2 Relationship between MPV/PLT ratio and fibrosis stage. There were significant differences between each pair of stages. MPV/PLT: Mean platelet volume to platelet count.

LC is a result of advanced liver disease, in which normal liver tissue is replaced by fibrotic tissue. These changes lead to loss of liver function. LC is most frequently caused by alcoholism, infection with hepatitis B and hepatitis C viruses, and fatty liver disease, but it may have many other causes. LC arising from nonalcoholic steatohepatitis (NASH) was recently shown to be a worldwide problem.

The standard method of diagnosing LC is liver biopsy. However, liver biopsy is an invasive procedure and cannot be performed on patients with severe ascites or severe coagulation disorders. Several studies have, therefore, assessed surrogate markers in blood predictive of LC; these include FibroTest (FibroSure) and the AST platelet ratio index[11]. In addition, elastographic methods, such as FibroScan, have been reported to be noninvasive methods of predicting LC[12,13]. We could not compare these methods with the MPV/PLT ratio because we do not have these examination devices.

MPV has been associated not only with fibrosis stage but with degree of liver inflammation[15]. For example, higher MPV has been observed in patients with NASH[16], and MPV has been found to correlate with the presence of nonalcoholic fatty liver disease (NAFLD)[17], although another study reported no correlation[18]. In addition, MPV may or may not correlate with insulin resistance, which is closely related to NAFLD[19,20]. To date, however, the relationship between NAFLD and MPV has not been determined.

MPV has been reported to strongly correlate with the prognosis of patients with non-small cell lung cancer[21]. In addition, high MPV and MPV/PLT have been found to be associated with a high risk for HCC[22,23]. An examination of the correlation between MPV/PLT ratio and postoperative prognosis of patients undergoing hepatic resection for HCC found that the MPV/PLT ratio was unrelated to overall or recurrence-free survival rate after resection.

This study had several limitations, including its retrospective design, performance at a single center and small sample size. Moreover, all patients included had undergone resection for HCC. Therefore, the results should not be generalized to patients without HCC before verification. Prospective, multicenter studies with large numbers of patients are needed to confirm these findings.

Several noninvasive methods for predicting cirrhosis have been reported, but liver biopsy is the only method for obtaining a definitive diagnosis. However, liver biopsy is invasive, and a noninvasive diagnostic method is desirable. Mean platelet volume (MPV), the size of platelets, can be determined from routine complete blood count data of blood samples. Generally, if bone marrow hematopoietic function decreases, MPV decreases. In contrast, if spleen function increases, new platelets are made rapidly and MPV increases. In recent years, the relationship between MPV and liver disease has attracted attention.

The authors studied only patients who were diagnosed with cirrhosis histopathologically after liver resection. The MVP/PLT ratio could predict cirrhosis more sensitively than other general liver function tests.

The MPV/PLT ratio also correlated with the degree of hepatic fibrosis according to the Inuyama classification. The authors examined the relationship between prognosis after hepatic resection of hepatocellular carcinoma and the value of the MPV/PLT ration, but unfortunately no correlation was found.

MPV is the size of platelets and can be determined from routine complete blood count data of blood samples. Liver cirrhosis and fibrosis are related to MPV.