Article-Type of This Article
H. Pylori

AIM: To establish stock of clinical Helicobacter pylori (H. pylori) isolates, to perform cagA and vacA typing of these isolates, to evaluate the relationship between genotypes of cagA and vacA and upper gastrointestinal diseases and to assess the association of vacA genotypes with presence of the pathogenicity marker-cagA.

METHODS: Clinical H.pylori strains were isolated from the antrum of 259 patients in Clumbia agar. The isolated H. pylori strains were identified by histology, and16SrRNA PCR. CagA genotypes were detected by colony hybridization, the probe was derived from the cloned plasmid PcagA, and digested by EcoRI-HindIII and the isolated PcagA DNA fragment was radioactively labelled by the random priming method. vacA genes types (s,m)and subtypes (s1a, s1b, s2) were typed by PCR. Vacuolating toxin was detected with neutral red absorb test. The results were treated statistically by χ2 test, t test, and rank sum test.

CONCLUSION: The cagA+ vacA type s1 clinical isolates are more in Xi’an area, but this can not serve as an index to predict gastric cancer.

Helicobacter pylori (H. pylori) is an important human pathogen that causes chronic gastritis and is associated with development of peptic ulcer diseases, and gastric malignancies[1]. Epidemiological studies have shown that H. pylori is a class 1 carcinogen for gastric adenocarcinoma, which is one of the most common cancers worldwide, and the odds ratio for developing gastric cancer is 3.8 to 8.7 in H.pylori infected subjects[2-6]. The pathophysiological mechanism by which H.pylori leads to gastric cancer has not yet been defined, although many hypotheses have been put forward.

Another important virulence factor, produced by approximately 50% of H. pylori strains, is a cytotoxin that induces formation of vacuolates in mammalian cells in vitro and leads to cell death[12]. The toxin is encoded by vacA gene, which is virtually present in all H.pylori strains[13]. The existence of different allelic variants in two parts of this gene has been described[14-17]. The N-terminal signal (s) region occurs as either a s1a, s1b or s2 allele. The middle (m) region is present as a m1 or m2 allele. The mosaic structure of vacA gene accounts for differences in cytotoxin production between strains[18-20].

The aim of this study was to detect and type the virulence-associated cagA and vacA genes of clinical H.pylori isolates in Xi’an area of China. Finally, the clinical relevance of vacA and cagA genotyping was investigated with gastric cancer and precancerous conditions.

A total of 192 H.pylori isolates were obtained from patients undergoing upper gastrointestinal examination. The diagnosis obtained by endoscopy and histology was recorded for all the patients from whom the strains were isolated. Following primary isolation, H.pylori strains were grown on Columbia agar with 50 mL/L frozen-melting sheep blood, 100 mL/L fetal bovine serum, and Skirrow’s antibiotic supplement in a microaerophilic atmosphere for 5 days at 37 °C, then frozen at -70 °C. Most of the strains were frozen four to six passages after primary isolation. Subsequent analyses were performed on strains derived from the frozen stocks. The isolated H.pylori strains were identified by histology, and16SrRNA PCR.

The probe was derived from the cloned plasmid PcagA, and digested by EcoRI-HindIII. The enzyme digestion segment of PcagA was retrieved by DNA purification reagent kit (Baotaike Biotechnology Company). The isolated PcagA DNA fragment was radioactively labelled by the random priming method.

Fresh H. pylori strains were harvested, suspended in 0.1 mol/ L NaCl-10 mmol/L Tris-HCl-1 mmol/L EDTA (pH 8.0), and incubated at 37 °C for 15 min. NH4Ac was added and the mixture was placed on ice for 5 min and extracted once with chloroform, mixed with isopropanol and placed on ice for 10 min. After extraction, the DNA solution was mixed with absolute ethanol at -20 °C for 1 h, washed with 700 mL/L ethanol, and dried. The DNA pellet was suspended in distilled water and stored at -20 °C.

Hela cells were cultured in plastic flasks in Dulbecco’s modified Eagle’s medium (DMEM) containing 25 mmol/L HEPES buffer (N -2 - hydroxyethylpiperazine- N’ -2 - ethanesulfonic acid, pH7.2) and 100 g/L fetal bovine serum. Cells were maintained at 37 °C in a 50 mL/L CO2 atmosphere. After cultured for 24 h, the cells were suspended with trypsin-EDTA and seeded in 96-well titration plates to make the density of cells of 104 per well. The supernatant prepared by water extracts from different strains was diluted two-fold from 1:2 to 1:32 and incubated with Hela cells for 12 h, then added 0.5 g/L neutral red- normal saline for 5 min, washed 3 times with 2 g/L BAS-normal saline and added HCl-ethanol. The absorbance was detected at 540 nm. When the detected value was more than 3 times of the negative control, it was defined as a positive result.

The presence of cagA gene was investigated in all clinical isolates by colony hybridization. EcoRI-HindIII-digested chromosomal DNA (Figure 1) was probed with an α32P-labelled DNA fragement internal to cagA. Typical examples of the results obtained with colony hybridization are reported in Figure 2. Of the 192 clinical isolates, 165 strains (86%) had a positive hybridization dot, while 27 strains (14%) did not show hybridization dot. In the 192 strains, the positive rate of gastric cancer group was 95%, chronic superficial gastritis (CSG) 77%, chronic atrophic gastritis (CAG) 86%, gastric ulcer (GC) 69%, and duodenal ulcer (DU) 95%. There were differences between CAG and GU (P < 0.05), and between GU and DU (P < 0.05), but there were no statistical differences between CSG and CAG (P > 0.05), and between CSG and GU (P > 0.05). 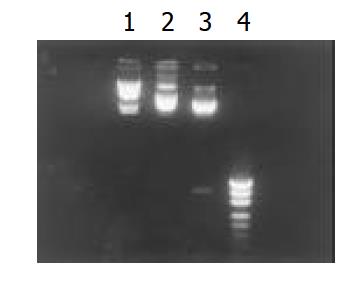 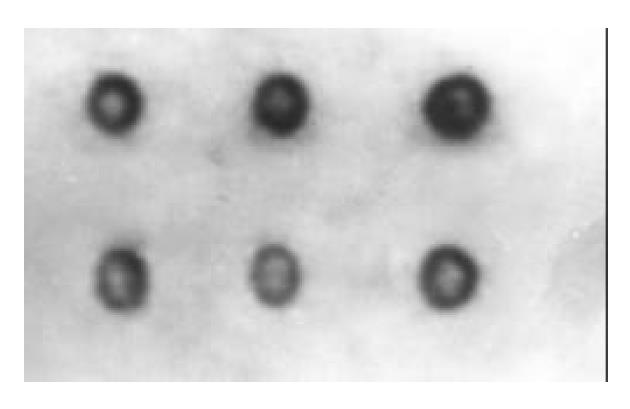 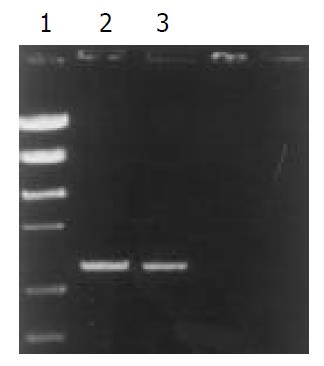 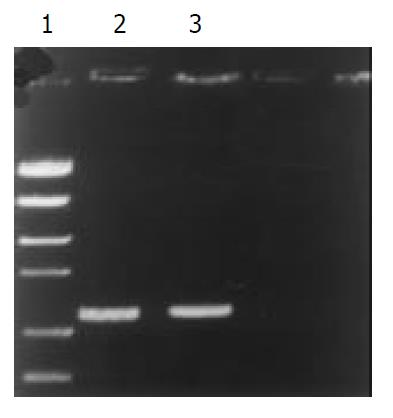 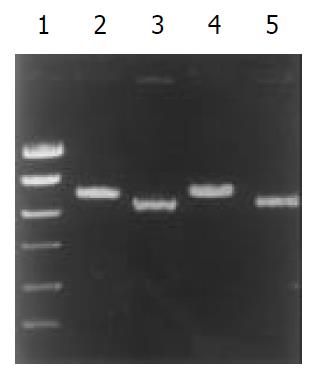 Relationship between cagA and vacA subtype

H. pylori is the major causative agent of chronic superficial gastritis and plays a central role in the etiology of peptic ulcer disease. Evidence suggests that H. pylori infection pre-exists in gastric carcinoma and precancerous lesions, and is a risk for development of gastric carcinoma. Cittelly showed that lower frequencies of cytotoxic genotypes such as cagA and vacA s1m1 were observed in patients with NAG (non atrophic gastritis), when compared to patients with GC (gastric cancer) or PU (peptic ulcer). He suggested that vacA and cagA could be used as markers for increased virulence. In 1994, H. pylori was designated as a class I carcinogen by the World Health Organization[21,22]. H. pylori infection is high among Chinese people (the infected rate is 40%-70%), and also high in gastric cancer. The mortality of gastric cancer ranks the first among malignancies. The results of epidemiologic surveys on the relationship between H. pylori and gastric cancer show that infection of H.pylori in Lanzhou, an area with a high occurrence of gastric cancer, is higher than that in Guangzhou, an area with a low occurrence of gastric cancer[23,24].

Recent researches suggested that the positive cytotoxin-associated gene A of H.pylori was about 60%. This toxin can induce severe inflammation of gastric mucosa and is related with peptic ulcer and gastric cancer[25]. We detected the cagA gene in 192 clinical strains by colony hybridization, with a total positive rate of 86%. In gastric cancer and duodenal ulcer, H.pylori infection rate (91%) was the highest in all gastric diseases. In gastric ulcer group it was the lowest, only 69%. Our results suggest that positive cagA of H.pylori isolated strains is related with gastric diseases in Xi’an area, Because the expression of cagA positive strains in gastric cancer group was higher than that in chronic gastritis group and the difference was apparent (P < 0.05). CagA can increase the serious consequences of carcinogenesis from chronic inflammation. The detectable rate of CagA antibody in human group in high occurrence region of gastric cancer was obviously higher than that in low occurrence area. Some researches have also proved that cagA positive strains are easy to cause inflammation of gastric mucosa and can stimulate hyperplasia of gastric mucosal cells. Many studies have shown that there is a relationship between cagA positive antibody and peptic ulcer and gastric cancer. One research suggested that development of more prominent gastritis and severe atrophy in cagA (+) patients was an indicator for the importance of cagA rather than H. pylori load. Our research was consistent with theirs[26,27].

All strains have the gene encoding toxin vacA, but its structure varies, especially in the mid-region which may be type m1 or m2 and the region encoding the signal sequence (type s1a, s1b or s2). The final structure is a mosaic, and all combinations of signal sequence and mid-region types are found except s2/m1. A strain’s vacA structure determines its in vitro cytotoxin activity, with type m1 vacA being more active than type m2, type s1a being more active than type s1b, and type s2 vacA not producing detectable activity. Our results showed that the main genotype was s1a in gastric cancer group, and there was an apparent difference between s1a and s1b (P < 0.05), and the s2 genotype was seldom found. In the meantime, there was no apparent difference between m1 and m2 (P > 0.05). The expression of s1a type was different among gastric cancer, gastric ulcer, and chronic gastritis. In gastritis group, there was no difference between s1a type and s1b type. Andreson’s research showed that the presence of the cagA gene was correlated with that of vacA signal sequence type s1a. However, no clear differences were found in the distribution of cagA and vacA genotypes among patients with peptic ulcer or chronic gastritis in Estonia. The reason why the different regional distribution can cause different genotype of H.pylori is not clear[28].

Our results showed that the infected H.pylori in Xi’an area was mainly toxin strains. In the meantime, the expression of s1a and s1b in the toxin strains was obviously different (P < 0.05), and there was no significant difference between m1 and m2 (P > 0.05). This suggests that s2 type can not produce detectable vacuolating toxin, and s1 type can produce the toxin. The middle-region is not obviously related to toxin production. The toxin produced by s2 type may not effectively pass through cellular membrane[29].

Inactivation of multiple antioncogenes and H.pylori infection may be involved in the development and progress of gastric carcinoma, and H.pylori infection may be associated with the inactivation of some oncogenes[31]. The genotype expression of H.pylori in gastric cancer was mainly cagA+/s1a strains in Xi’an area, but this can not serve as an index to predict gastric cancer. The main genotype of vacA in chronic gastritis, gastric ulcer and duodenal ulcer is s1, but there is no difference between s1a, s1b, m1 and m2.