METHODS: Hybridization of cDNA blotting membrane was performed with 32P-labeled cDNA probes synthesized from RNA isolated from Human hepatoma cell line HLE and non-cirrhotic normal liver which was liver transplantation donor. AtlasImage, a software specific to array, was used to analyze the result. The expression pattern of some genes identified by Atlas arrays hybridization was confirmed by reverse transcription polymerase chain reaction (RT-PCR) in 24 pairs of specimens and Northern blot of 4 pairs of specimens.

RESULTS: The differential expression of cell cycle/growth regulator in hepatocellular carcinoma (HCC) showed a stronger tendency toward cell proliferation with more than 1.5-fold up-regulation of Cyclin C, ERK5, ERK6, E2F-3, TFDP-2 and CK4. The anti-apoptotic factors such as Akt-1 were up-regulated, whereas the promotive genes of apoptosis such as ABL2 were down-regulated. Among oncogene/tumors suppressors, SKY was down-regulated. Some genes such as Integrin beta 8, Integrin beta 7, DNA-PK, CSPCP, byglycan, Tenacin and DNA Topo were up-regulated. A number of genes, including LAR, MEK1, eps15, TDGF1, ARHGDIA were down-regulated. In general, expression of the cancer progression genes was up-regulated, while expression of anti-cancer progression genes was down-regulated. These differentially expressed genes tested with RT-PCR were in consistent with cDNA array findings.

CONCLUSION: Investigation of these genes in HCC is helpful in disclosing molecular mechanism of pathogenesis and progression of HCC. For the first time few genes were discovered in HCC. Further study is required for the precise relationship between the altered genes and their correlation with the pathogenesis of HCC.

Hepatocellular carcinoma (HCC) is one of the most common malignant tumors and ranks the eighth in incidence of human cancer in Asia, Africa and South Europe, and causes an estimated 1 million deaths annually. The molecular mechanism underling HCC is currently unknown[1-15]. Tumor development and progression involves a cascade of genetic alterations. Techniques frequently used in study of gene expression, such as RT-PCR, differential display PCR and Northern blot analysis, have their limitations including requirement of large amounts of RNA, time-consuming, and limited number of genes being tested simultaneously. Hence, analysis of expression profiles of a large number of genes in hepatoma cell line is an essential step toward clarifying the detailed mechanisms of hepatocarcinogenesis and discovering target molecules for the development of novel therapeutic drugs.

DNA microarray enables investigators to study the gene expression profile and gene activation in thousands of genes and sequences[16-25]. In this study, we used cDNA expression microarray containing 588 genes related to carcinoma to analyze genes that are differentially expressed in human Hepatoma cell line HLE.

MATERIALS AND METHODS
Tissues and specimens

Four normal liver tissues without cirrhosis and 24 pairs of primary HCC and corresponding noncancerous liver tissues without cirrhosis were obtained with informed consent from patients who underwent liver transplantation and hepatectomy at the First Clinical College of Harbin Medical University. Histopathological identification was confirmed by the same pathologist. These specimens were immediately frozen in liquid nitrogen once obtained.

The HCC cell line HLE, epithelial-like cells, established from HCC patient in 1975 by Dr Dor was used in this study. HLE was cultured in RPMI1640 (Sigma, Saint Louis, USA) media containing 10% fetal bovine serum, 1% penicillin and streptomycin in a 37 °C incubator. Cells were harvested at 70%-80% confluence.

Total RNA of normal liver tissues was obtained by extracting frozen tissues in Trizol (Life Technologies Inc., Gaitherbur, MD) according to the manufacturer’s instructions. Normal liver were made in spices and homogenized in Trizol solution (1 ml/100 mg). Trizol was added into the bottles cultured with HLE, after washed with cold PBS. The concentration of RNA was assessed by absorbency at 260 nm using a Nucleic Acid and Protein Analyzer (BECKMAN 470, USA).

Atlas human cancer cDNA expression array (7742-1) was purchased from Clonech Laboratories Inc (Palo Alto, USA). The membrane contained 10 ng of each gene-specific cDNA from 588 known genes and 9 housekeeping genes. The cancer-related genes analyzed in this study were divided into six different groups according to its function.

Different probes were added to tubes containing Atlas human cancer cDNA expression array, which were pre-hybridized at 68 °C for 2 hr, and hybridization was performed at 68 °C for 18 hr in rolling bottles. The membranes were washed strictly and exposed to X-ray films (Fuji Films, Tokyo, Japan) at -70 °C for 1-3 d.

The images were scanned with Fluor-S MultiImager (Bio-Rad, Hercules, CA) and analyzed with AtlasImage analysis software Version 1.01a (Clontech, Palo Alto, CA). Human glyceraldehyde-3-phosphate dehydrogenase (GAPDH) was selected for normalization because its expression was constant in cancer array hybridization system. The normalized intensity of each spot representing a unique gene expression level was acquired. Genes were considered to be up-regulated when the intensity ratio was ≥ 1.5 or the difference was ≥ 10000 between the expressions of HLE and normal liver tissues.

To confirm the cDNA array results, semi-quantitative RT-PCR of 24 pairs of HCC tissues and normal liver tissues was performed for two genes (TFDP2, E2F3) displaying expression alterations. Twenty-five ml reaction mixture was performed under the following conditions: denaturation at 95 °C (3 min); 24 cycles of 94 °C (30 s), 60 °C (30 s) and 72 °C (45 s); then 72 °C extension (3 min). GAPDH were used as an internal reference in each PCR reaction. The 5 ml RT-PCR product was analyzed by electrophoresis on a 1.5% agarose gel.

Using a cDNA expression microarray technique we established the expression profile of 588 genes selected from different areas in human hepatoma cell line HLE and normal liver tissues (Figure 1A, 1B). No signals were visible in the blank spots and negative control spots indicating that the Atlas human cancer array hybridization was highly specific. The intensity for housekeeping genes was similar at the same time indicating that the results were credible. GAPDH was used to normalize the intensities. The comparison results analyzed by AtlasImage software showed that there were 30 genes changed, 22 up-regulated and 8 down-regulated in Hepatoma cell line HLE versus normal liver tissues. In the test, the ratio one over the other ≥ 1.5 or the difference between two ≥ 10000 was considered as up-regulated genes (Table 1). 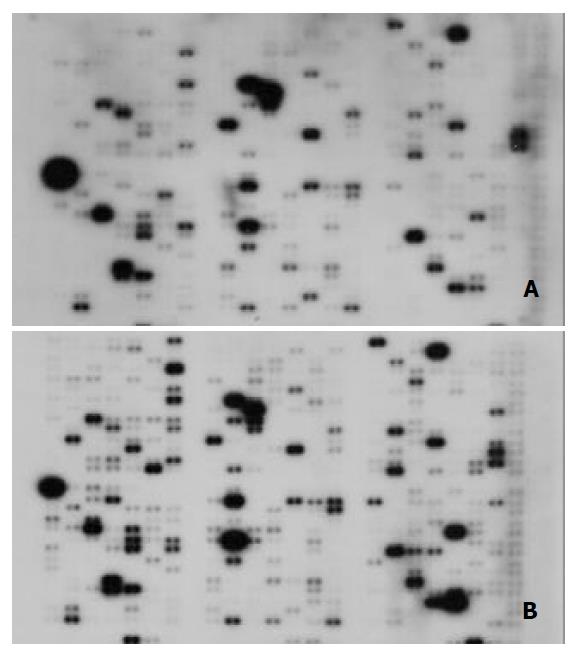 Twenty four paired tissues were performed for RT-PCR to verify accuracy and universality of the hybridization data. The RT-PCR results for 2 genes were consistent with hybridization data after normalization. Among the 24 paired tissues, the RT-PCR results of 2 genes were identical to the microarray results and the constituency was TFDP2 17/24, E2F3 16/24, respectively (Figure 2). 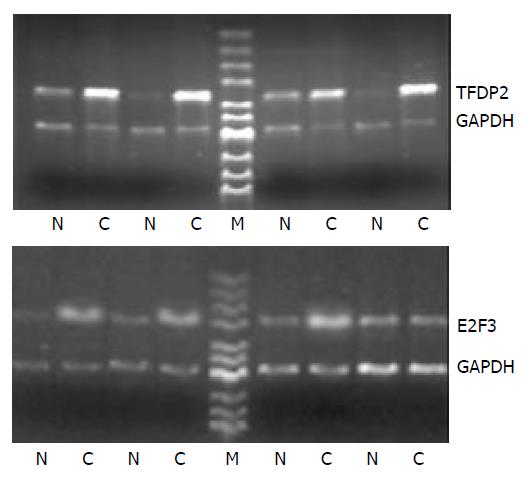 Northern blot of four paired tissues were performed and verified the accuracy of the microarray. Among the 4 paired tissues, the northern blot results of 4 genes further meant that the Atlas human cancer cDNA microarray data were believable and comparable (Figure 3). 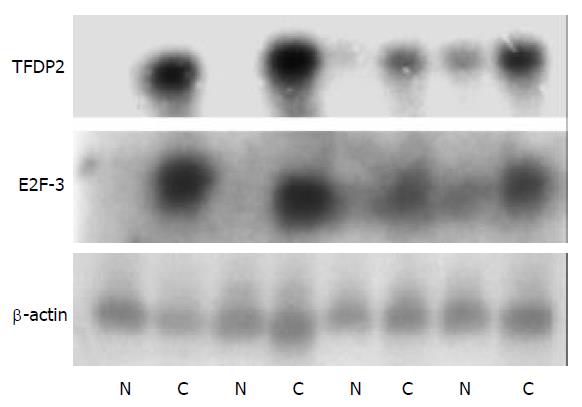 In this study, we explored the gene expression profiles in human hepatoma cell line HLE and normal liver tissues using Atlas human cancer array. cDNA array technology was used to examine simultaneously the expression of specific genes on a single hybridization. Although human genome projects have generated a large-scale sequence data for millions of genes, the biological functions of such genes remain to be deciphered. It is very important to define differential gene expression profiles of tumors and normal tissues before understanding the functional significance of specific gene products. Thus a systematic approach for examining large number of genes simultaneously is required. Microarray techniques have been developed in this conditions[23]. The gene expression profiles obtained from microarray technique was first reported in 1995[16]. It might be useful for tumor classification, elucidation of key factor in tumors, and identification of genes[24-27].

Several genes related to cell cycle regulators, growth regulators were abundantly up-regulated in our HCC samples. E2F-3 is a transcription factor that plays an important role during the cell cycle of proliferating cells, its products are rate limiting for initiation of DNA replication[28]. E2F-3 is able to activate transcription of E2F-responsive genes in a manner depending upon the presence of at least one functional E2F binding site[29,30]. TFDP2 gene is a member of the TFDP genes family of transcription factors. TFDP2 protein can form heterodimers with E2F family proteins in vivo. The E2F-TFDP transcription factors are major regulators of genes that are required for the progression of S-phase and they play a critical role in cell cycle regulation and differentiation[29]. TFDP2 may plays a major role in modulating the function of E2F in cell cycle regulation and oncogenesis. The retinoblastoma tumor suppressor protein has been shown to induce growth arrest by binding to E2F-TFDP and repressing its activity[31]. The up-regulation of E2F-3 and TFDP2 may play an important role in HCC cell proliferation.

Protein kinase B (PKB)/Akt is a growth-factor-regulated serine/threonine kinase which contains a pleckstrin homology domain[32]. Activated PKB/Akt provides a survival signal that protects cells from apoptosis induced by various stresses, and also mediates a number of metabolic effects of insulin[33]. The up-regulation of Akt1 may have a great help for tumor cell to survive from apoptosis.

In our study, genes related to DNA repair and recombination was up-regulated in HLE, which indicates that the generative ability of tumor cell was stronger than that of normal hepatocytes. DNA-dependent protein kinase (DNA-PK) is a nuclear protein serine/threonine kinase that is activated by DNA double strand breaks (DSBs). It is a component of the DNA DSB repair apparatus, and cells deficient in DNA-PK are hypersensitive to ionizing radiation and radio-mimetic drugs[34]. DNA-PK may have roles in controlling transcription, apoptosis, and the length of telomeric chromosomal ends. The DNA-PK complex is regulated in a cell cycle-dependent manner, with peaks of activity found at the G1/early S phase and again at the G2 phase in wild-type cells[35].

Integrins are a major family of cell adhesion molecules involved in cell-cell and cell-extracellular matrix interactions. Integrins are suggested to be involved in many different biological processes such as growth, differentiation, migration, and cell death. The integrin alpha 8 beta 1 has been reported to bind to fibronectin, vitronectin, tenascin-C and osteopontin in cell adhesion or neurite outgrowth assays[36,37]. Integrins are heterodimeric cell adhesion proteins connecting the extracellular matrix to the cytoskeleton and transmitting signals in both directions[38]. The up-regulation of Integrin may play a role in HCC metastasis.

In conclusion, our study demonstrates the cDNA array is a powerful tool to explore gene expression profiles in cancer. The genes described in this study provide valuable resources not only for basic research, such as molecular mechanism of carcinogenesis, progression and prognosis, but also for clinical application, such as development of new diagnostic markers, identification of therapeutic intervention in human HCC.