AIM: To observe the expression of cyclooxygenase-2 (COX-2) and to investigate the association between COX-2 expression and infection with cytotoxic-associated gene A (cagA) positive strain Helicobacter pylori (Hp) in human gastric cancer, and subsequently to provide fresh ideas for the early prevention of gastric cancer.

Epidemiological studies show that gastric cancer is closely linked to Helicobacter pylori (Hp) infection[1-5], because the incidence of gastric cancer increases 4-9 times after Hp infection, and more than 60% patients with gastric cancer had been infected with Hp[6]. Recent studies indicate that infection with cagA+Hp possesses a potent toxin and high risk for causing gastric cancer[7,8]. There is a close association between cagA+Hp and precancerous stage, even gastric cancer[9-12]. But the mechanism that how cagA+Hp actually leads to gastric cancer still remains unclear.

Cyclooxygenase-2 (COX-2) is one isoform of COX enzyme family, which is the rate-limiting enzyme for prostaglandin H synthesis. It is an inducible enzyme, and normally absent in cells, but its expression is rapidly and transiently induced in response to growth factors, tumor promoters or cytokines[13,14]. Recent studies indicate that COX-2 not only involves in inflammatory responses but also relates to carcinogenesis. Since COX-2 is overexpressed in many tumors, such as colon-rectum cancer[15-17], esophageal cancer[18,19] etc., it may play an important role in the development and progression of cancers[20-22].

It is well documented that Hp infection can cause inflammation, and COX-2 is often involved in inflammatory responses and also related to cancinogenesis. However, it is not clear whether cagA+Hp infection induces COX-2 expression and whether there is an association between them during gastric cancer development and progression.

To investigate the possible association between the COX-2 expression level and cagA+Hp infection, in this study, Flow Cytometry technique was employed to quantitatively determine the expression level of COX-2 in specimens of gastric cancer and adjacent normal gastric mucosa and PCR method was used to amplify the cagA gene in specimens of gastric cancer.

Specimens of gastric cancer and corresponding adjacent normal gastric mucosa were obtained from 32 patients who had undergone surgical operations of gastric cancer at the Department of Tumor Surgery of the first affiliated hospital of China Medical University. All samples including 1 case of stomach malignant lymphoma and 31 cases of gastric adenocarcinoma were confirmed by pathology diagnosis. The 32 patients were made up of 19 males and 13 females ranging in age from 46 to 73 years old.

Assay of PCR production 10 μL of reaction mixture were loaded to 1.5% agarose gel containing 0.5 μg/mL ethidium bromide for electrophoresis, the gel was then placed under ultraviolet ray for detection. The amplified cagA gene product was about 390 bp. 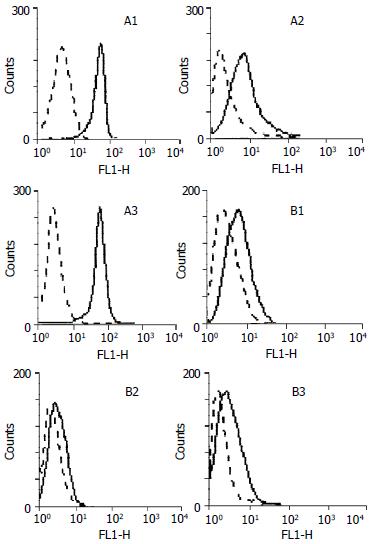 Figure 1 Analysis of COX-2 expressions in gastric cancer tissues and relevant adjacent normal gastric tissues by FACS. A1, A2, A3: Gastric cancer tissues; B1, B2, B3: Relevant adjacent normal gastric tissues. Dotted lines represent results generated with anti-rabbit-FITC; Solid lines represent results generated with rabbit-anti COX-2 and anti-rabbit-FITC.
The association between the levels of COX-2 expression and cagA -Hp infection in gastric cancer

Recently, evidence has been presented that COX-2 is induced in human colorectal cancers and in the polyps of mouse FAP models. When the COX-2 gene is inactivated in FAP model mice, both the number and size of polyps are reduced dramatically. In addition, selective inhibitors of COX-2 cause results similar to those caused by COX-2 gene knockout mutations. These genetic and pharmacological data open up the possibility of effectively treating human FAP and various human cancers with COX-2 selective inhibitors[33-35].