AIM: To investigate the hepatocellular apoptosis after hepatectomy in obstructive jaundice and biliary decompression rats.

Obstructive jaundice is often a clinical manifestation of the disease of extrahepatic biliary system or pancreas. In jaundiced patients with hilar bile duct carcinoma or gallbladder carcinoma, hepatectomy is one of the surgical regimens, but surgical procedures are associated with increases of morbidity and mortality rates, mainly due to postoperative complications such as hepatic failure, sepsis, bleeding and renal failure[1,2]. The significance of biliary drainage before surgery is controversial. Preoperative biliary drainage decreased the mortality and morbidity rates in patients with obstructive jaundice in some studies but not in others[3-5]. Experimental and clinical studies have identified several etiological factors including hypotension, impaired nutritional status, depressed immune function, hepatic dysfunction and the presence of toxic bile salts in circulation[6-8]. A high serum bilirubin concentration in jaundiced patients undergoing operation has been recognized as a predictor of mortality[3].

Hepatocyte injury and progression of liver disease are due to direct chemical damage to hepatocytes by toxic hydrophobic bile salts[9]. Although toxic bile salts are known to cause hepatocyte toxicity by inducing apoptosis, the precise mechanisms responsible for bile salt-mediated apoptosis remain to be established. This information is important because it could help provide rational strategies for the treatment of cholestatic liver disorders and decreasing postoperative complications. The aim of this study was to investigate the hepatocellular apoptosis after hepatectomy in obstructive jaundice and biliary decompression rats.

All surgical procedures were carried out under ether anesthesia. All rats were weighed before surgery and at the end of the study.

Laparotomy was performed through an upper midline incision. After ligation of the proximal and distal bile ducts, the common bile duct was divided to prevent recanalization[10]. The ligatures were placed in the same position in all rats. The 70% hepatectomy was done according to the method of Higgins and Anderson[11] on the seventh day after biliary obstruction in OB and OB-CD groups and on the fifth days after the biliary decompression in CD-Hx group.

Choledochoduodenostomy was performed according to the method of Ryan et al[12] with minor modifications. After biliary obstruction for 7 days, the abdomen was reopened through the previous incision. The dilated common hepatic bile duct was freed from its surrounding tissues and the contents were aspirated. A small incision was made in the bile duct and a silicone tube with an outer diameter of 0.9 mm was inserted and secured in position with a 7-0 silk suture. The free end of the tube was inserted into duodenum approximately 1.5 cm from the pylorus, and then tied in position with a 6-0 PDS purse-string suture. Then the suture was carried out between the bile duct and the duodenal wall to protect the separation of the anastomosis.

Measurement of bilirubin and enzymes in blood

An aliquot from the liver homogenate was centrifuged at 13000×g. The supernatant was diluted 1000-fold and subjected to a sandwich ELISA designed to detect DNA/histone fragments using a test kit from Boehringer Mannheim, according to the manufacturer’s instructions. Briefly, a 96-well microtiter plate was coated with antibody against histones. Diluted samples were then applied to the wells for 90 min, followed by incubation with peroxidase-conjugated anti-DNA antibody for 90 min. Color substrate was added and absorbance was measured at 405 nm at 5, 10, and 15 min using a 96-well microtiter plate reader.

On the third and fifth day after hepatectomy, a section of liver tissue measuring approximately 5 mm in thickness was cut from the right lateral lobe and fixed in 10% buffered formalin, processed by standard techniques and embedded in paraffin. Apoptotic change in the liver was analyzed by in situ TUNEL method using an apoptosis detection kit (ApopTag, Oncor S7100, Gaithersburg, MD) according to the manufacturer’s instructions. Briefly, after deparaffinization and rehydration, 4 µm thick tissue sections were incubated in PBS, and then preincubated with equilibration buffer for 15 min, and digoxigenin-labelled dUTP and dATP in TdT buffer were added to cover the section, which was then incubated in a humidified chamber at 37 °C for 60 min. The reaction was stopped by immersing the slides in a stop/wash buffer. Following washing in PBS, the sections were incubated in anti-digoxigenin-peroxidase for 30 min at room temperature. The slides were incubated with DAB and hydrogen peroxide and counterstained with hematoxylin. Apoptotic cells were counted from at least 10 randomly chosen high-power fields at ×400 magnification. Cells with clear brown nuclear labelling were defined as TUNEL-positive. Apoptotic index was defined as the total number of apoptotic cells seen in every ten high-power field sections.

Liver tissues were immediately frozen by liquid nitrogen and stored at -80 °C on the third and fifth days after hepatectomy. The Caspase 3-like activity was measured using a commercially available kit (Clontech Laboratories, Palo Alto, CA) according to the manufacturer’s instructions. Caspase enzymatically cleaved the substrate and released free 7-amino-4-trifluoromethyl coumarin (AFC) that produced a blue-green fluorescence, which was measured fluorometrically. Liver samples were homogenized in 500 µl of lysis buffer. Samples were centrifuged at 16000×g in a microfuge for 10 min at 4 °C and normalized to protein using the Bradford assay (Bio-Rad). Fluorescent substrate, DEVD- AFC was incubated with 50 µl supernatants for liver extracts at 37 °C for 60 min. The fluorescence of cleaved substrates was measured using a fluorometer (Molecular Dynamics Inc.) at an excitation wavelength of 400 nm and an emission wavelength of 505 nm. An AFC calibration curve was established by serial dilution of a pure AFC solution provided in the kit.

All data were expressed as mean ± SEM. Statistical analysis was done by statistical package of SPSS for Window release 9.0. Differences between mean were tested with the Mann-Whitney test. A probability value less than 0.05 was considered statistically significant.

RESULTS
Bilirubin and enzymes in blood

The level of total serum bilirubin reached more than 7 mg/dl after 7 days’ biliary obstruction, and the high bilirubin level rapidly decreased to 0.8 mg/dl only on day 1 after biliary decompression. We therefore thought that our models functioned well for biliary decompression. The total serum bilirubin concentration on the first day after hepatectomy in OB-CD group was 1.6 mg/dl, which was higher than that in CD-Hx group. The level of bilirubin in OB group was increased, while there was no statistically significant differences among other three groups on day 5 after hepatectomy (Figure 1). 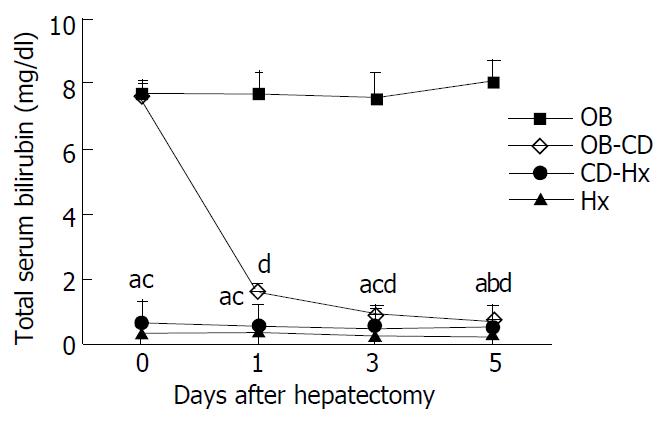 The ALP concentration of OB group was significantly higher than that of other groups, but no differences of serum ALP level were found among the other groups after hepatectomy (Figure 2). 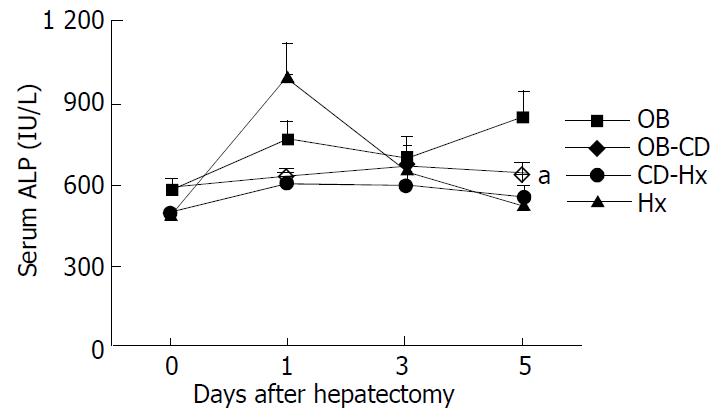 Figure 2 Changes of serum ALP after hepatectomy. Six rats were used for each group. Results were the mean ± SEM. aP < 0.05 CD-Hx group vs OB group. 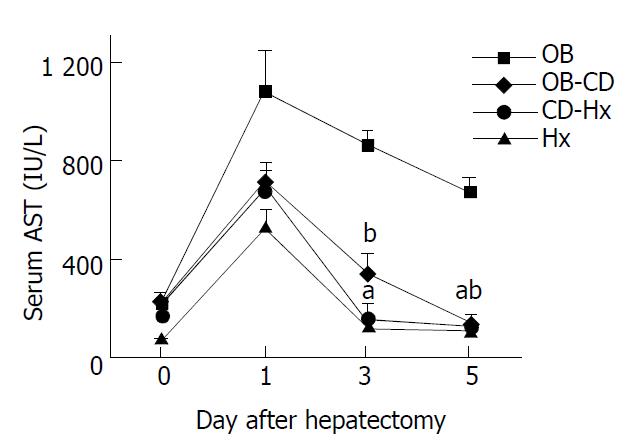 The cytoplasmic levels of DNA (histone-associated) oligonucleosomal fragments in hepatocytes after hepatectomy were determined. The presence of these fragments in the cytoplasm reflected the extent of DNA fragmentation and nuclear disruption that are characteristic of apoptosis. The level of DNA fragments in CD-Hx group was significantly lower than that in OB and OB-CD groups on the third day after hepatectomy (Figure 4). There was no significant difference between CD-Hx and OB groups.

TUNEL signal was defined by distinct nuclear staining. The number of hepatocellular apoptosis was high on day 3 and decreased on day 5 when the liver was harvested on days 3 and 5 from rats after hepatectomy. The data shown in Figure 5 indicate that apoptosis positive cells were significantly higher in OB group than in other groups. A very low rate of apoptosis was found in CD-Hx group, with no difference between CD-Hx and Hx groups. 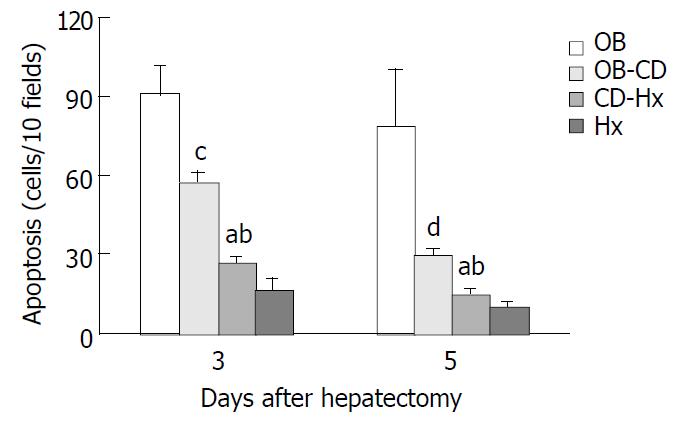 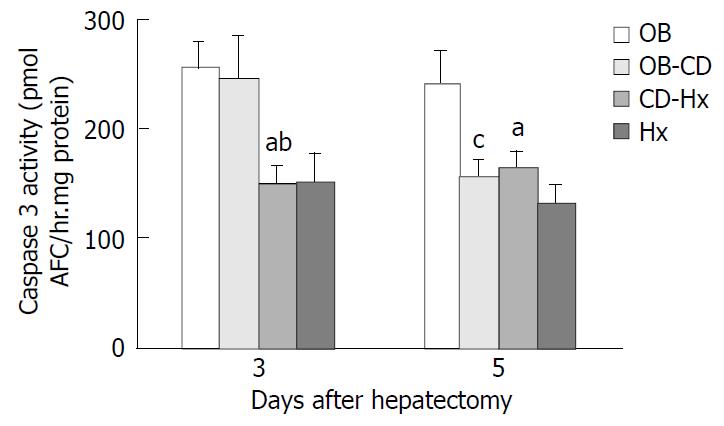 This animal model was designed to simulate the clinical treatment procedures used for patients with obstructive jaundice undergoing hepatectomy. Choledochoduodenal drainage was performed before or at the same time as 70% hepatectomy. Obstruction at the choledochoduodenostomy occurred in about 2% rats. These rats were excluded from further studies. The mortality rate was about 20% following choledochoduodenostomy or hepatectomy in jaundice rats. No rats died during the procedure and all deaths occurred in the first 3 days postoperatively, usually secondary to bleeding.

During obstructive jaundice, the retention of biliary constituents and high biliary pressure caused hepatocellular injury[20]. This is supported by the fact that serum AST and ALP levels increased during obstructive jaundice and decreased after choledochoduodenostomy (data not shown). Kanno[21] reported that biliary obstruction for even 5 days suppressed rat liver function, as assessed with aminopyrine breath test and galactose tolerance test. These results suggested that obstructive jaundice could cause serious impairment of pivotal liver functions, consequently resulting in poor prognosis after partial hepatectomy. The present study clearly showed that biliary drainage before hepatectomy significantly improved liver functions and decreased hepatocellular apoptosis. Serum liver function tests showed that choledochoduodenal drainage was effective in both OB-CD and CD-Hx groups. Furthermore, serum enzyme levels, apoptotic index, DNA fragments and Caspase-3 activity were significantly lower in CD-Hx group than in other groups. These data suggested that biliary drainage before hepatectomy had beneficial effects in severe jaundice patients.

Accumulation of these toxic bile salts within hepatocytes has been thought to play a key role in liver injury during obstructive jaundice. Indeed, hepatic levels of toxic bile salts chenodeoxycholate and deoxycholate correlated with the degree of liver damage[22]. Because widespread necrosis was not prominent in most cholestatic liver diseases, it has become apparent that the occurrence of hepatocyte death during cholestasis was rather due to apoptosis than due to necrosis[23]. The mechanisms of apoptosis by toxic bile salts could been partially elucidated in recent years. Toxic bile salts could directly cause apoptosis in cultured rodent hepatocytes[24]. Bile acid-induced toxicity is typically characterized by hepatocyte swelling, disruption of plasma membrane integrity, and release of intracellular constituents. The apoptotic pathway in hepatocytes could be initiated by a ligand-independent activation of Fas by bile salt[25]. Apoptosis was triggered by the Fas pathway, at least in part, by the activation of intracellular enzymes called Caspases. Caspases have been found to be cysteine-containing, aspartic acid-specific proteases which exist as zymogens in the soluble cytoplasm, mitochondrial intermembrane space, and nuclear matrix of virtually all cells[26]. Upon activation of the apoptotic pathway, initiator Caspases (i.e., Caspases 8 and 9) were converted to their active forms, which in turn activated downstream Caspase 3, which could activate other Caspases and ultimately cleave various substrates[27]. One of these substrates has been found to be a Caspase-dependent endonuclease that is freed from its inhibitor by Caspase-3 in the cytoplasm, and subsequently enters the nucleus, where it cuts DNA into oligonuclesomal (180 bp) fragments[28]. Additionally, Bid, a protein responsible for the release of mitochondrial cytochrome C and amplification of the apoptotic cascade, could also be activated by Caspases[29]. Ultimately, this pathway would ensure the self-destruction of cells with the characteristic morphological features of apoptosis, including nuclear fragmentation, cellular shrinkage, and acidophilic staining of the cytoplasm[30]. Bile acid induced apoptosis also appeared to require an activation and translocation of protein kinase C, which then could lead to an increase of intracellular magnesium[31,32]. This would cause an activation of Mg2+-dependent endonucleases, leading to DNA cleavage.

We would express our sincere thanks to Prof. Monden and Dr. Umeshita for their technical and financial support.