AIM: To illustrate the possible role of cell differential agent-II (CDA-II) in the apoptosis of hepatoma cells induced by arsenic trioxide (As2O3).

METHODS: Hepatoma cell lines BEL-7402 and HepG2 were treated with As2O3 together with CDA-II. Cell surviving fraction was determined by MTT assay; morphological changes were observed by immunofluorescence staining of Hoechst 33258; and cell cycle and the apoptosis index were determined by flow cytometry (FCM).

RESULTS: Cytotoxity of CDA-II was low. Nevertheless, CDA-II could strongly potentiate arsenic trioxide-induced apoptosis. At 1.0 g/L CDA-II, IC50 of As2O3 in hepatoma cell lines was reduced from 5.0 µmol/L to 1.0 µmol/L (P < 0.01). The potentiation of apoptosis was dependent on the dosage of CDA-II. FCM indicated that in hepatoma, cell growth was inhibited by CDA-II at lower concentrations (< 2.0 g/L) primarily by arresting at S and G2 phase, and at higher concentrations (> 2.0 g/L) apoptotic cell and cell cycle arresting at G1 phase increased proportionally. The combination of two drugs led to much higher apoptotic rates, as compared with the either drug used alone.

It has been reported that arsenic trioxide (As2O3), a newly found apoptosis inducer, possesses a greater apoptotic effect on hepatoma cells as comparied with some drugs used in chemotherapy[1-5]. However, because of its toxicity and the drug resistance of cancer cells, it has not been widely used in the treatmeant of cancers[6-10]. As a biological preparation purified from human urine, cell differential agent-II (CDA-II) can effectively induce cell differentiation and reverse drug resistance of cancer cells against chemotherapeutic agents[11,12]. Clinical application of CDA-II has demonstrated its low toxicity and satisfactory therapeutic effect[13-15]. This report is intended to investigate the effect of CDA-II on As2O3-induced apoptosis of hepatoma cells in an attempt to find a better combination therapy for hepatoma.

Cells were cultured in PRMI1640 with 10% calf serum, 100 U/mL penicillin and 100 μg/mL streptomycin in a humidified atmosphere of 5% CO2 at 37 °C. With a density between 2 × 106 and 6 × 106, two cell lines grew in the same way as typical epithelial cells, and reproduced once every two days. During the experiment, the density of cells was adjusted to 1 × 106/mL with culture medium PRMI1640, and transferred to 96-well plates, 100 μL cell suspension per well, to incubate for 24 hours. Drugs of different concentrations were added to the plate, 4 plate wells for each drug concentration according to the aforementioned group division: 100 μL drug and 100 μL culture medium were added to each well with a total volume of 200 μL for group B and C; 100 μL of two drugs each was added with a total volume of 200 μL for group D; and 200 μL culture medium was added to each well of control group. All the groups had concentrations of 4 compound wells. After incubation for 24 h, 48 h, 72 h and 96 h, 20 μL of 0.5% MTT was added to each well and incubated for another 4 hours. The supernatant was discarded and 200 μL of DMSO was added. When the stain was dissolved, the optical density ABS value of each well was read on MinireaderIIat 570 nm. Cell survival rate was calculated with the following equation: average A value of experimental group/average A value of control group × 100%. Each experiment was repeated at least three times.

The rate of apoptosis tested by fluorescence of live cells

After the aforementioned cells were cultured with drugs for 72 h, cells were harvested and fixed with 1:3 glacial acetic acid/methanol twice, first for 5 min and then 10 min and washed with phosphate buffer solution (PBS). Hoechest 33258 was put into cell suspension to a final concentration of 1.0 mg/L and the cells were stained fluorescent for 15 minutes away from light. An Olympus BH-2 fluorescence microscope was used to observe the fluorescent associated with DNA of cells neclei. Graphs were drawn based on different concentrations of drugs and apoptotic rate of cells.

Cells treated with drugs for 96 h were collected. After lysis with Nicoletti lysis buffer, DNA was extracted with an equal volume of phenol, phenol/chloroform and chloroform once each, incubated with RNase and precipitated with ethanol and sodium acetate. DNA was sedimented by centrifugation, air dried and dissolved in Tris-EDTA buffer. Each DNA sample was analyzed by gel electrophoreses in 1.2% agarose gel for 1.5 h and visualized under ultra-violet light.

The cells described above were harvested, and 1 × 106 cells were centrifuged to get rid of supernatant, fixed with ethanol, and incubated with 200 μL RNase A at 37 °C for 1 h; 800 μL PI staining solution was mixed into it and the subsequent mixture was stored in the refrigerator at 4 °C for 30 minutes. Flow cytometry was then used to analyze the cell cycle. The cells with content of DNA in sub G1 were apoptotic cells.

Software SPSS 10.1 was employed to process the data with test of index deviation, and to analyze the causes of the deviation in data concerning multiple factors of the experimental design.

Effect of two drugs on apoptosis in hepatoma cells

Under fluorescent microscope, cell nuclei of the control group displayed fluorescence evenly. Treated by the two drugs in combination, a large proportion of cells underwent apoptosis. Uneven and more dense particulate fluorescence could be observed in cell nuclei (Figure 1). The rate of apoptosis of 500 cells was calculated. The result showed (Figure 2) that when As2O3 was employed at 1.0 µmol/L, the number of apoptotic cells was only slightly above that of control, and the difference was not significant (P = 0.063). However, the apoptotic rate rose greatly with the increase of drug concentrations above 1.0 µmol/L, and the significance of differences became obvious as against the control (P < 0.01). When CDA-II was used alone, the concentration must be above 3.0 g/L showed significant difference from the control (P < 0.015). CDA-II greatly potentiated the apoptosis induced by As2O3. The apoptotic rate of 1.0 µmol/L of As2O3 together with 1.0 g/L of CDA-II approached that of 4.0 µmol/L As2O3. 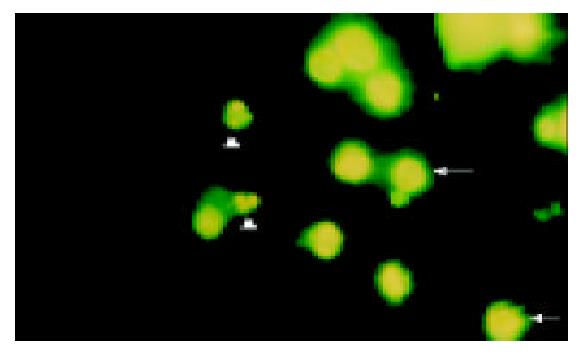 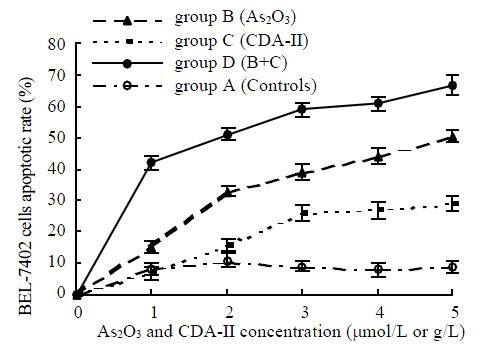 DNA of cells undergoing apoptosis showed a ladder pattern in agarose gel electrophoresis. In the present study, DNA ladders were characteristically identified in the cells treated with 5.0 µmol/L As2O3 or 1.0 g/L CDA-II + 1 µM As2O3 for 72 h as shown in Figure 3. 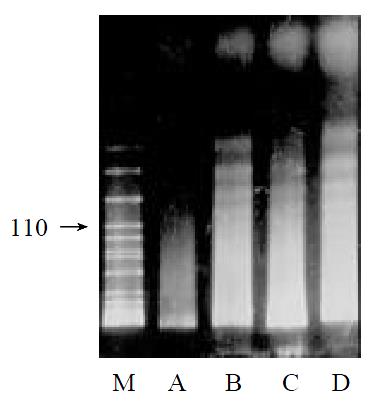 Four days after treatment with As2O3, sub-G1 cells, namely apoptotic cells, became evident in HepG2 and BEL-7402, and the number of apoptotic cells was in direct proportion to drug concentration (Figure 4). As2O3 at 5.0 µmol/L induced 46.7% of HepG2 and 53.1% of BEL-7402, respectively to undergo apoptosis. When CDA-II was employed alone below 2.0 g/L, the apoptotic rate of hepatoma cells was not significantly different from that of the control. At such low concentration (< 2.0 g/L), the cells arrested in G2 exceeded those in the control, whereas at concentrations above 2.0 g/L, both apoptotic cells and cells arrested in G1 increased. The combination of 1.0 g/L CDA-II and 1.0 µmol/L As2O3 in hepatoma cells resulted in reduced vitality of the two cell lines, and the apoptotic rate rose from 11.3% in the presence of 1.0 µmol/L As2O3 alone to 40.2% (Figure 5). The potentiation of As2O3-induced apoptosis by CDA-II was concentration-dependent. The percentage of sub-G1 cells induced by 3.0 g/L CDA-II and 1.0 µmol/L As2O3 reached 63%, as against 57% caused by 5.0 µmol/L As2O3. All these findings indicated that CDA-II could synergistically potentiate As2O3 to induce apoptosis of hepatoma cells. 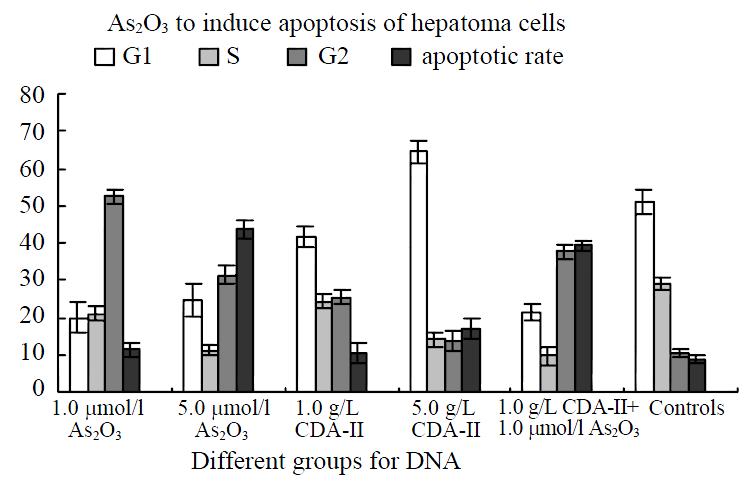 Figure 4 Comparison of DNA in various groups 4 days after medicinal treatment. P < 0.05 Compared with the controls

Toxicity of cell apoptotic agents and drug resistance of cancer cells are major factors contributing to the failure of chemotherapy. It has been reported by Cai et al[16], that one-third of 47 patients with normal liver function but suffering from recurrent acute promyelocytic leukemia who were treated with As2O3, had their livers damaged. Obviously, the patients with damaged liver function must choose smaller dosage of As2O3. In this regard it particularly fits the recommend combination therapy with CAD-II, because CAD-II is a very effective drug to protect liver from hepatotoxin-induced injuries[17-20]. In votro, hepatoma cell growth and proliferation were only inhibited by arsenic trioxide at lower concentrations (0.25-2.0 µmol/L), with no significant apoptosis, at higher concentration (> 2.0 µmol/L) can induce cell apoptosis[21-26]. According to the sensitive standard of chemotherapeutic agents devised by Abe et al[27,28], hepatoma cells in this experiment are sensitive to the dosage of 5.0 µmol/L As2O3. Based on the following formula[29]: drug concentration (mg/L) = [(drug mg × surface size)/body weight] × (100/60), the sensitive dosage in clinical application is 20 mg/m2. In the presence of 1 g/L of CDA-II, IC50 of As2O3 can be reduced from 5.0 µmol/L to 1.0 µmol/L. That means 4 mg/m2 is equally as effective in the combination protocol as 20 mg/m2 of single As2O3. CAD-II is a biological preparation purified from human urine which is a selective inhibitor of abnormal cancer methylation enzymes[16,30,31]. DNA hypermethylation attributable to abnormal methylation enzymes is related to the evolution of drug resistance of cancer cells[32,33]. It is likely that the modulation of abnormal methylation enzymes is responsible for the reverse of drug resistance and the potentiation of As2O3-induced apoptosis. Shen et al[34-36] reported that abnormal DNA methylation plays an important role in the process of hepatocellular carcinogenesis. DNA methylation level is closely correlated with the biological characteristic of liver cancer, the lower the level of DNA methylation, the stronger the infiltration and metastatic capacity. Animal experiments on have demonstrated that CAD-II could effectively prevent the growth and metastasis of xenografted hepatoma[37,38] Analysis of cell cycle revealed that CAD-II at low concentrations could arrest more hepatoma cells in G2 and S, and at high concentrations could bring about more apoptosis and relatively more cells arrested in G1. It is remarkable that CAD-II at a low dosage is not capable to induce apoptosis, nevertheless, it can strongly potentiate As2O3-induced apoptosis. With 1.0 g/L of CAD-II, the apoptosis-inducing capability of As2O3 can be reduced from 5.0 to 1.0 µmol/L. Therefore, only 4.0 mg/m2 of As2O3 is needed in clinical treatment giving an equivalence of 20 mg/m2 of As2O3. Thus, the combined therapy of As2O3 and CAD-II offers a great advantage to reduce toxic side effect and to improve the therapeutic efficacy for hepatoma.