AIM: To elucidate the role of NF-κB activation in the development of multiple organ dysfunction (MOD) during acute obstructive cholangitis (AOC) in rats.

METHODS: Forty-two Wistar rats were divided into three groups: the AOC group, the group of bile duct ligation (BDL group), and the sham operation group (SO group). All the animals in the three groups were killed in the 6th and 48th hour after operation. Morphological changes of vital organs were observed under light and electron microscopy. NF-κB activation was determined with Electrophoretic Mobility Shift Assay (EMSA). Arterial blood gas analyses and the serum levels of lactate dehydrogenase (LDH), alanine aminotransferase (ALT), blood urea nitrogen (BUN) and creatinine were performed. The concentrations of TNF-α and IL-6 in plasma were also measured.

In humans with acute obstructive cholangitis (AOC) or other sepsis, the onset of multiple organ dysfunction (MOD), especially involving the liver, the heart, the lungs, and the kidneys, is a well known complication that is associated with a high mortality rate[1-10]. MOD in either humans or animals appears to emerge as a consequence of progressive development of activation of mononuclear phagocytes system and an unregulated release into the blood of a variety of proinflammatory mediators (interleukins, cytokines, chemokines)[11-14]. NF-κB is highly activated at sites of inflammation in diverse diseases and can induce transcrition of proinflammatory cytokines[15-17]. For example, NF-κB is overexpressed in neutrophi, peripheral blood mononuclear cells (PBMC), dendritic cells (DC), and Kupffer cell, and so on. Its activity may enhance recruitment of inflammatory cells and production of proinflammatory mediators like IL-1, IL-6, IL-8, and TNF-α[18-21]. These events may be associated with the development of MOD.

E. coli and type IV of collagenase were obtained from Sigma Chemical Company (St. Louis, Mo.). The kits of TNF-α and IL-6 were obtained from Beijing Bang Bing Co.. Other reagents were purchased from Ke Hua Co. or Zhong Sheng Co..

Forty-two male Wistar rats, weighing 250-300 g, were obtained from the Laboratory Animal Center of Chongqing University of Medical Science. The animals were fed with standard rat food and water ad libitum for 1 wk before use and kept in a climate-controlled environment with a 12 h light-dark cycle. The animals were handled in accordance with the guidelines set by the Experimental Animals Society of Chongqing University of Medical Science. These animals were randomized into three groups: the AOC group, the group of bile duct ligation (BDL), and sham operation (SO). All the animals in these groups were killed in the 6th and 48th hour after operation. Seven rats from each group at each time point were examined.

Morphological changes of liver, heart, lungs, and kidneys were observed by light microscope and transmission electron microscope (TEM). These samples from different organs were fixed with 10% buffered formalin or 2.5% glutaraldehyde immediately. For optical microscopy, the tissue blocks were embedded in paraffin, and the sections were stained with hematoxylin and eosin (H&E). For TEM, the tissue blocks were embedded in Epon 618 resin and ultrathin sections were stained with uranyl acetate and lead citrate. A transmission electron microscope (JEM-2000) was used.

Isolation of nuclear proteins Nuclear proteins were isolated as previously described[1,22]. In brief, the liver, heart, lungs, and kidneys tissues were placed in 0.8 mL of ice-cold hypotonic buffer [10 mmol·L-1 HEPES (pH7.9), 10 mL KCl, 0.1 mmol·L-1 EDTA, 0.1 mmol·L-1 ethylene glycol tetraacetic acid, 1 mmol·L-1 DTT; Protease inhibitors (aprotinin, pepstatin, and leupeptin, 10 mg·L-1 each)]. The homogenates were incubated on ice for 20 min, vortexed for 20 s after adding 50 μL of 10 per cent Nonidet P-40, and then centrifuged for 1 minute at 4 °C in an Eppendorf centrifuge. Supernatants were decanted, the nuclear pellets after a single wash with hypotonic buffer without Nonidet P-40 were suspended in an ice-cold hypertonic buffer [20 mmol·L-1 HEPES (pH7.9), 0.4 mol·L-1 NaCl, 1 mmol·L-1 EDTA, 1 mmol·L-1 DTT; Protease inhibitors], incubated on ice for 30 min at 4 °C, mixed frequently, and centrifuged for 15 min at 4 °C. The supernatants were collected as nuclear extracts and stored at -70 °C. Concentrations of total proteins in the samples were determined according to the method of Bradford.

In some animals, a carotid artery catherior was placed through an anterior cervical area, and arterial blood samples were collected to measure blood lactate, pH, pO2, pCO2, and HCO3-using a blood gas analyer.

Assay of TNF-α and IL-6 in plasma

The concentrations of TNF-α and IL-6 in plasma were measured by a commercially available enzyme-linked immunosorbent assay (ELISA) according to the manufacture instructions which has a low detection limit of 50 ng·L-1. Briefly, microtitre plates were coated with anti TNF-α or IL-6 mAb overnight at room temperature on a plate shaker and then, after they had been blocked, samples were added. The detecting antibody was biotinylated anti TNF-α or IL-6. The results were determined at 492 nm with DG 3022 Enzyme Linkage Essay Instrument.

The results are presented as means ± SEM. Data sets were analyzed with a one-way ANOVA. The differences were regarded significant when the P value was less than < 0.05.

RESULTS
The changes of histology and ultrastructure of vital organs

In AOC group, in the liver, there was multifocal and patchy lytic necrosis. hepatocytes showed swelling and partly fatty degeneration, focal cytoplasmic degeneration and many myelin figures could be seen in the cytoplasm (Figure 1), Kupffer cells showed proliferation and many myelin figures in the cytoplasm (Figure 2). In the lungs, polymorphonuclears neutrophil (PMN) aggregated in alveolar capillary. In the heart, mitochondria were swollen or even vacuolated (Figure 3). In the kidneys, there was extensive fusion of foot processes of podocytes in glomeruli. The cells had lost their cell membranes and exhibited mitochondrial swelling together with intracellular edema in proximal convoluted tubules (Figure 4). 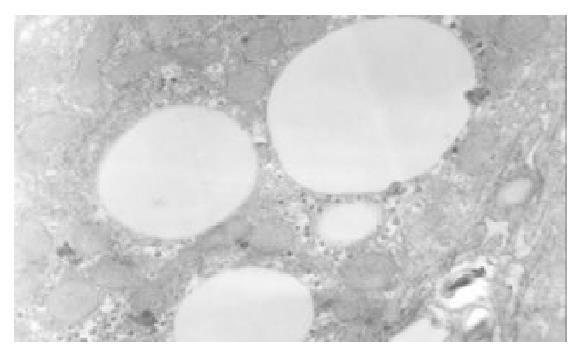 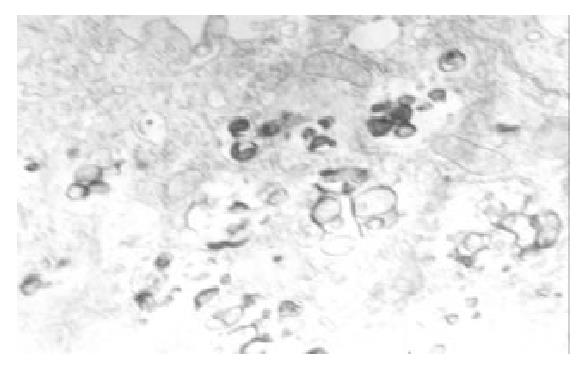 Figure 2 Kupffer cells showed proliferation and focal cyto-plasmic degeneration and many myelin figures could be seen in the cytoplasm in AOC group TEM × 15000. 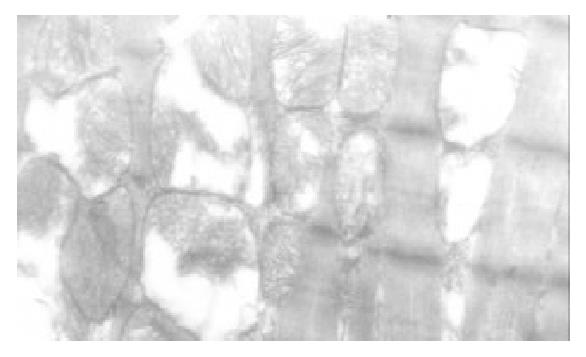 Figure 3 Myocyte mitochondria of heart were swollen or even vacuolated in AOC group TEM × 20000. 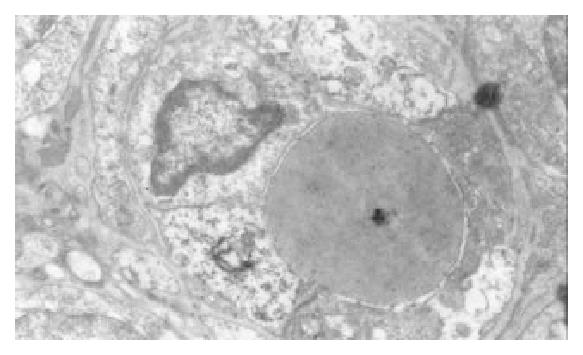 Figure 4 Proximal convoluted tubules was full of electron dense phagosomes, the cells had lost their cell membranes and exhibited mitochondrial swelling together with intracellular edema In AOC group TEM × 3000.
Changes of NF-κB activation 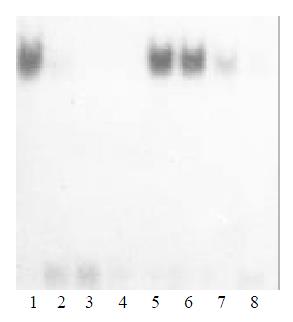 Biochemical parameters in three groups were showed in Table 2.

AOC in humans often leads to progressive MOD, which is still associated with a high mortality rate[1-5]. Recent studies showed NF-κB is rapidly in response to many pathologic signals that may be relevant during surgical trauma, including cytokines, adhesion molecules, endotoxin, hypoxia, and shear[23-27]. Activation of NF-κB results in the transcrition of genes that can participate in the inflammatory reaction by inducing the production of cytokines, immunoreceptors, and cell adhesion molecules[28-32]. These cytokines and proinflammatory mediators are therefore a potentially attractive target inducing MOD during sepsis and endotoxemia[33-47]. Information on the role of NF-κB in sepsis, AOC and MOD is limited but shows that NF-κB is increased during inflammation and sepsis[1,18].

Perhape other important finding of this study was the marked difference in NF-κB levels among various organs during AOC. During AOC, Expression of NF-κB was observed first in liver at 6 h. At 48 h, NF-κB also expressed in the lung, the heart, and the kidney besides the liver. The liver was the main organ which was injured by bacteria during AOC, liver and other organs influence each other in their function, the liver plays a key role in host defense. Matuschak et al reported that the liver failure affected on the incidence and resolution of the adult respiratory distress syndrome. Seki et al[49] Hepatocytes produce acute phase protein and complement in bacterial infections. KCs are activated by various bacterial stimuli, including LPS and bacterial superantigens, and produce IL-12 and other monokines. So the liver plays a crucial role in the first line of defense against bacterial defections[50-52]. However, if this defense system is inadequately activated, sepsis and shock associated with MOD takes place. It was found in our previous study that when liver was injured, especially KCs function failed, gram-negative bacteria normally restricted to the biliary tract invaded the bloodstream and were trapped in vital organs, and NF-κB activation occurred, eventually MOD ensued. Further clinical trials are indicated to confirm that this “molecular biology” marker indeed will be a useful clinical tool in the management of the patients with AOC[53-56].

In conclusion, we have shown the expression of NF-κB and the pathological changes of the damages occurred in many vital organs, especially in liver during AOC. These findings have an important implication for the role of NF-κB activation in MOD during AOC.