AIM: The loss of heterozygosity (LOH) on tumor suppressor genes is believed to play a key role in carcinogenesis of colorectal cancer. In this study, we analyzed the LOH at 5 loci on the long arm of chromosome 22 in sporadic colorectal cancer to identify additional loci involved in colorectal tumorigenesis.

METHODS: Five polymorphic microsatellite markers were analyzed in 83 cases of colorectal and normal DNA by PCR. PCR products were eletrophoresed on an ABI 377 DNA sequencer; Genescan 3.1 and Genotype 2.1 software were used for LOH scanning and analysis. Comparison between LOH frequency and clinicopathological data were performed by χ² test. P < 0.05 was considered as statistically significant.

CONCLUSIONS: This study provided evidence for the involvement of putative tumor suppressor genes related to the sporadic colorectal carcinoma on chromosome 22q. The tumor-suppressor-gene (s) might locate on the 22q12.2-12.3 and/or 22q13.32-13.33.

DNA Extraction The cancerous and adjacent normal tissues were fresh frozen within 30 min after removed. These tissues were then cut into cubes of approximately 2 mm3 and immediately frozen in liquid nitrogen. DNA was extracted using standard methods with proteinase K digestion and phenol/chloroform purification. 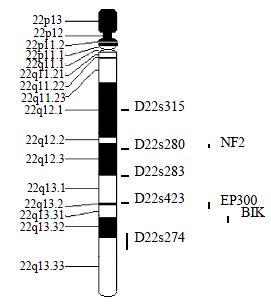 LOH Analysis A portion of each PCR product (0.5 μL) was combined with 0.1 μL of Genescan 500 size standard (PE Applied Biosystems Foster city CA, USA) and 0.9 μL of formamide loading buffer. After denaturation at 96 °C for 5 min, products were eletrophoresed on a 5% polyacrylamide gels on an ABI 377 DNA sequencer (PE Applied Biosystems Foster city CA, USA) for 3 h. Genotype 2.1 software displayed individual gel lanes as electopherograms with a given size, height, and area for each detected fluorescent peak. Stringent criteria were used to score the samples. Alleles were defined as the two highest peaks within the expected size range. A ratio of T1:T2/N1:N2 of less than 0.67 or greater than 1.50 was scored as a loss of heterozygosity (Figure 2). Most amplification of normal DNA produced two PCR products indicating heterozygosity. A single fragment amplified from normal DNA (homozygote) and those PCR reactions in which fragments were not clearly amplified were scored as not informative. The LOH frequency of a locus was equal to the ratio of the number between allelic loss and informative cases. The average LOH frequency of chromosome 22 long arm was the average value of each locus LOH frequency. 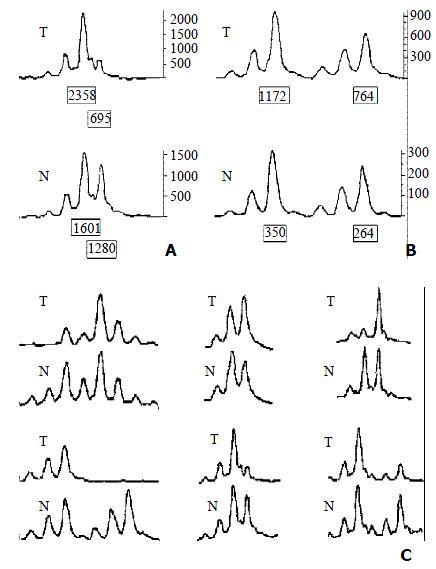 Comparison between LOH and clinicopathological data were performed by χ² test. P < 0.05 was considered as statistically significant.

The relationship of clinicopathological features and LOH on chromosome 22

During tumorigenesis, loss of the wild-type allele (inherited from the non-mutation-carrying parents) is frequently observed at the appropriate locus. To date, loss of heterozygosity (LOH) on tumor suppressor genes plays a key role in colorectal cancer transformation[3]. And LOH analysis of sporadic colorectal cancer can promote the discovery of unknown tumor suppressor genes[7,8]. In this study, LOH scanning was carried out in 83 sporadic colorectal cancer samples with 5 highly polymorphic markers and analyzed by Genotyper software, that is, by the ratio of the fluorescence intensity of allele, with an effort to identifying additional loci involved in colorectal tumorigenesis.

By database referring, there are three candidate tumor-suppressor genes related to colon cancer, NF2 (22q12.2)[15], EP300 (22q13)[16], NBK/BIK (22q13.3)[17] on 22q12.2-13.33. NF2 gene was confirmed to be a tumor-suppressor-gene in neurofibromatosis type 2 syndrome[18-21]. And NF2 gene inactivation was also reported in NF2-assoicated tumor and some sporadic cancer[22-28]. NF2 gene encodes a 587-amino acid protein with striking similarity to several members of the ERM family of proteins proposed to link cytoskeletal components with proteins in the cell membrane, including moesin, ezrin, and radixin. Because of the resemblance to these 3 proteins, Trofatter et al[29] called the NF2 gene product merlin. Stokowski et al[30] found that 80% of the merlin mutants significantly altered cell adhesion by causing cells to detach from the substratum. They stated that such changes in cell adhesion might be an initial step in the pathogenesis of NF2. And some scholars also studied the relationship between NF2 gene and sporadic colorectal cancer and found that NF2 gene was probably involved in some colorectal tumors, but was not the critical chromosome 22q tumor suppressor gene involved in colon tumorigenesis[31,32]. The results of this study suggested that there might be colon cancer related candidate tumor-suppressor-gene (s) on 22q12.2 and NF2 was the only known tumor-suppressor-gene in this region. So it was needed to evaluate the effect of NF2 gene on colorectal carcinogenisis, and the new tumor suppressor gene involved in colon tumorigenesis can not be excluded absolutely. There were 2 putative tumor-suppressor genes on 22q13.2-13.31, EP300 and NBK/BIK[33]. P300 is the number of the retinoblastoma protein family. Stein et al[34] supposed that p300 acted as a tumor suppressor firstly. Recently, Hasan et al[35] proposed the p300 might participate in chromatin remodeling at DNA lesion sites to facilitate proliferating cell nuclear antigen (PCNA) function in DNA repair synthesis. Muraoka et al[36] raised the possibility that inactivation of EP300 gene was involovled in the genesis or progression of colorectal cancer. And Gayther et al[37] described EP300 mutations that predicted a truncated protein in 6 (3%) of 193 epithelial cancers analyzed and provided the first evidence that it behaved as a classic tumor suppressorgene. But EP300 mutation was rare in colorectal cancer tissue. So Castells et al[12] presumed that NBK/BIK gene, a proapoptotic BCL-2 family member[38-41], acted as a candidate gene in that region. However, SSCP sequencing analysis excluded mutations of this gene. The results of this study showed that the LOH frequency was also high on 22q13, especial on 22q13.32-13.33, suggesting that colorectal cancer associated candidate tumor-suppressor genes are likely to locate on chromosome 22q13.

Yana et al[13] indicated that loss of heterozygosity correlated with Dukes staging. Iino et al[42] suggested that allelic loss on 22q was significantly associated with the presence of lymph node metastasis. However, Castells et al[12] did not support their opinion. This result also agreed with Castells’s study and suggested that there was no association between LOH of each marker on chromosome 22q and Dukes staging. However, we found on D22S274 locus, LOH frequency of rectal cancer was higher than that of proximal colon cancer. And the frequency of the tumors in distal colon and rectum was also higher than that of the tumors in proximal colon cancer. Now it was admitted that the mechanism of carcinogenisis in distal colon was different from that in proximal colon[43-45]. And the mechanism in rectal cancer was also different from that in the proximal colon[46]. Distal colonic cancer displayed a higher frequency of 17p and 18q allelic loss, p53 accumulation[47], c-myc expression and aneuploidy[48]. Right-sided tumors are more often diploid[48] and of the microsatellite instability (MSI) phenotype. Rectal cancers showed significantly more expression of p53 than that in proximal colon cancer[46], which was similar with distal colonic cancer. This study showed the D22S274 LOH was more frequent in distal colon and rectal cancer than in proximal colon ones, which proved the mechanism of carcinogenisis in distal colon and rectum was not completely same as that in the proximal colon.

Allelic loss on chromosome 22q is present not only in colorectal cancer but also in carcinomas of the ovary (55%)[49-52], breast (40%)[53-55], pancreatic endocrine (30%)[27], oral cavity (40%)[56], stomach[57], liver[58], lung[59], head and neck[60], and insulinoma[61]. After microsatellite DNA analysis, several attempts were made to identify a region of deletion and eventually the tumor suppressor genes responsible for these neoplasms. Allelic deletions were restricted to D22S274 (22q13) marker in oral squamous cell carcinoma[56]. Handel-Fernandez et al[14] found that LOH region presented between marker D22S444 and D22S922 (22q13.2-q13.3), indicating the locations of tumor suppressor genes that may contribute to the devolopment of pancreatic cancer. Considering these results, it is tempting to hypothesize that the same putative tumor suppressor genes might be involved in these different neoplastic processes. Further LOH scanning with high-density microsatellite markers in the region and the study of the relationship between these genes and the cacinogenesis of sporadic colorectal cancer may provide much more genetic information and find the potential tumor suppressor genes.