AIM: To evaluate the therapeutic effect of compound Chinese drugs, Jianpiyiwei capsule (JPYW) on gastric precancerous lesions in rats and to explore its mechanism of action.

METHODS: Model of gastric precancerous lesions was constructed in male Wistar rats: a metal spring was inserted and fixed through pyloric sphincter. One week after recovery, each rat was given 50-60 °C hot paste containing 150 g/L NaCl 2 mL orally, twice a week for 15 wk. Then 10 normal and 11 model rats were anaesthetized, after the measurement of gastric mucosa blood flow (GMBF), the rats were killed and the mucosal hexosamines and malonic dialdehyde (MDA) were measured. The morphological changes of gastric mucosa were observed macroscopically and microscopically, and by an automatic imaging analysis system. Other rats were treated with JPYW 1.5 g/kg·d-1 or 4.5 g/kg·d-1, or distilled water as negative control respectively (n = 10 in each group). After 12 wk, all the rats were examined as above.

RESULTS: The gastric mucosa of model rats showed chronic atrophic gastritis with dysplasia and intestinal metaplasia (IM), GMBF and hexosamine content were reduced significantly and MDA was increased as compared to the normal group (P < 0.01). After 12 wk treatment, the pathological changes of the negative control group became worsened, while in JPYW treated groups the changes were modified with significant increase of GMBF and reduction of MDA, although the hexosamine concentration increased only mildly.

Jianpiyiwei capsule (JPYW), a compound Chinese drug, has the effect of replenishing qi (vital energy) and invigorate the spleen, promoting blood flow and regulating the stomach function. This study investigates the therapeutic effect of JPYW on gastric precancerous lesions in rats, and tries to elucidate its mechanism of action in part.

Male Wistar rats, weighed 250 g to 300 g, were purchased from the Laboratory Animal Center, Chinese Academy of Medical Science. The rats were housed in an air-conditioned animal room at 25 ± 2 °C and 60% humidity with food and water available ad libitum, and drinking water was changed every day.

Before the rats were killed, they were forbidden from food except drinking freely for 24 h, then they were anaesthetized. After incision of the abdominal wall, an ultrasonic detective probe was put to the junction between antrum pylori and corpus ventriculi in gastric curvature of stomach through an incision at the provetriculus, and the voltage number were read to represent the relative level of GMBF.

After the detection of GMBF, the rat was killed and stomach was removed and cut off through the greater curvature, washed by physiological saline and residual liquid was absorbed. The whole stomach was first observed in gross, and then the gastric mucosa of posterior wall was scraped off and frozen to -20 °C immediately for the detection of hexosamines and malonic dialdehyde (MDA). The anterior wall was fixed in 10% neutral buffered formalin over 24 h, then were cut into 2 mm-wide pieces, all the pieces were embedded in paraffin. Five μm sections, stained with hematoxylin and eosin and with alcian blue, periodic acid-schiff and high iron diamine (AB-PAS/HID), were examined under light microscopy.

The achievement of gastric mucosa has been described as above. The hexosamine content in gastric mucosa was detected according to Neuhaus's method[2], and the measurement of MDA by thiobarbituric acid method.

Numerical values were expressed as ¯x ± s. Comparisons of data between groups were performed with student's t test or χ² test. P < 0.05 was considered significant.

Gross examination of stomach in model and negative control groups showed thinning and paleness of gastric mucosa, with disarrayed plicae and small white nodules, while in the normal groups it was pink, moistened and smooth. In JPYW treated groups, the gross change of gastric mucosa was only modest as compared with negative control group, especially in 4.5 g/kg·d-1 group (P < 0.05 or 0.01) (Table 1). 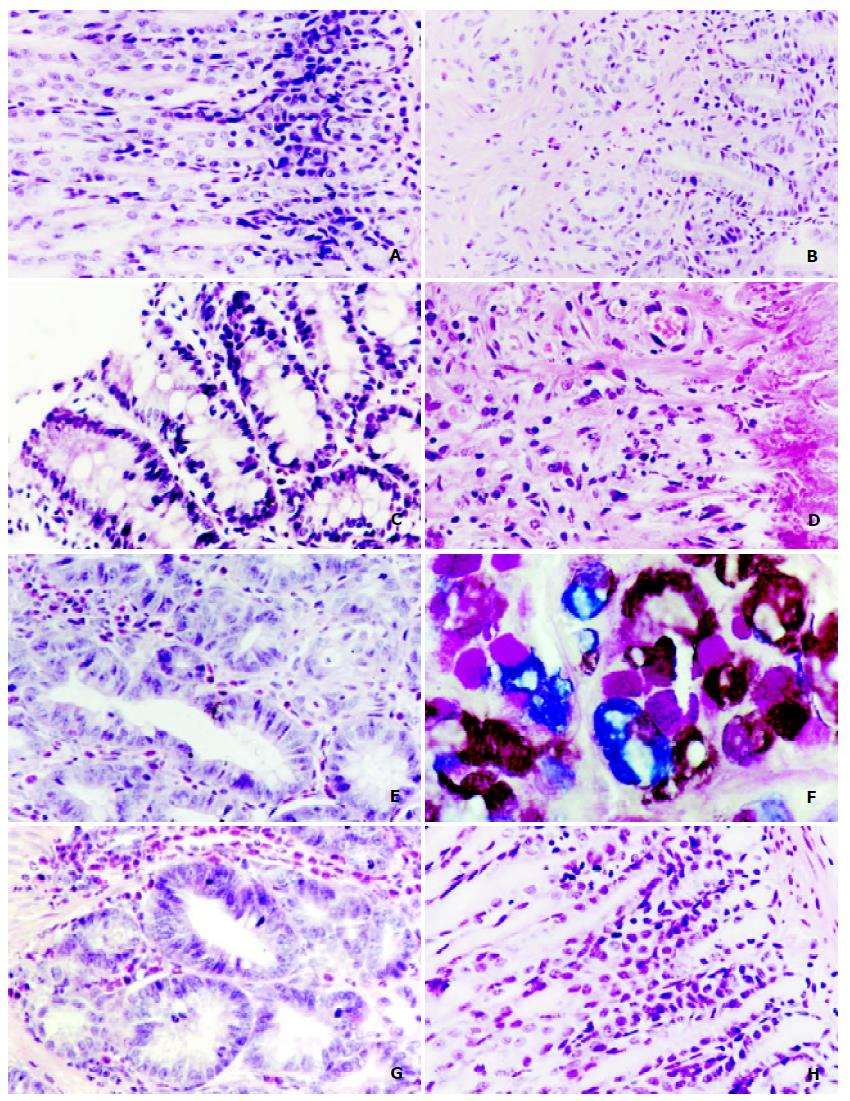 Data by automatic image pattern analysis were shown in Table 3. The ratios of T1/T2, representing the degree of mucosal atrophy, were greatly reduced in model and negative control groups both at the gastric body and the antrum, and ratios of N/C, P1/D1, P2/D2 representing the degree of dysplasia, were increased more prominently in those two groups as compared with normal group (P < 0.01). In JPYW treated groups, all the ratios approached normal, although there were still some difference between 1.5 g/kg·d-1 group and normal (P < 0.05 or 0.01). (Table 3)

Effects of JPYW on gastric mucosal contents of hexosamines and MDA

In the model group, the gastric mucosa hexosamine content was lower and MDA was higher than that in the normal group. After 12 wk treatments, no differences were seen between them in the negative control group and model group, yet in 4.5 g/kg·d-1 group there was some increase in hexosamine content, significant difference was still present when compared with normal group (P < 0.05). Moreover, the MDA content in JPYW treated groups was greatly reduced (P < 0.05 or 0.01). (Table 4)

Although the over all incidence of gastric cancer has steadily declined in the western world[3], it is still the most common fatal malignancy in China[4], therefore the treatment of gastric precancerous lesions should be one of the important measures for preventing gastric cancer.

Since 1988 correa and his colleagues proposed a human model of gastric carcinogenesis, which is gastric cancer develops through a complex sequence of evens from normal mucosa to superficial gastritis, chronic atrophic gastritis, IM, dysplasia and finally to intestinal type gastric cancer, numerous studies have found genetic alterations in gastric percancerous lesions and supported the hypothesis[5-10]. But the etiology of gastric precancerous lesions has not been fully elucidated. Many factors are thought to have close relations to gastric carcinogenesis, such as a diet high in salt[11,12] and starch[13], consumption of high temperature food[14], Helicobacter pylori (HP) infection[15-19], drinking alcohol[19,20], smoking[20,21] and bile reflux[21-23].

Some experimental studies have shown that the high-salt diet may potentiate HP-associated carcinogenesis in mice by inducing proliferation, pit cell hyperplasia, and glandular atrophy[24], and 50-week bile reflux may cause gastric cancer in rats[25]. In this article, we establish a model of gastric precancerous lesions in rats by inserted a metal spring through gastric pylorus sphincter and given hot paste containing high concentration of NaCl, which lead to the development of precancerous gastric lesions. The typical feature of this model are glandular atrophy, lamina propria infiltration of chronic inflammatory cells, thickening of muscularis mucosa, glandular dysplasia and IM, simulating human gastric percancerous lesions. JPYW was found to have obvious effects on gastric precancerous lesions in rats with thickening of gastric mucosa and decreased incidence of dysplasia and IM that firmly supported our hypothesis that JPYW has therapeutic effects on gastric precancerous lesions.

GMBF is an important part of mucosal defense system, bringing oxygen and nutrients to the mucosal cells, against penetration of carcinogenesis into gastric mucosa[26], maintaining the structure and function of the stomach and is closely associated with the pathogenesis and the healing of gasrtrointestinal lesions[27]. In the JPYW treated groups, the GMBF recovered to normal, which indicates that the increase of GMBF may be one of the mechanisms of JPYW on gastric precancerous lesions.

Etiologic studies find that blood levels of natural antioxidants in patients with gastric precancerous lesions or cancer are much lower than healthy people[28] and low level of dietary vitamin C may contribute to the progression of precancerous lesions to gastric cancer[29], whereas a dietary high intake of antioxidants may lower the risk for gastric cancer[30]. Farinati et al[31] reported that there was an oxidative DNA damage accumulation with mutagenic and carcinogenic potential in chronic gastritis. MDA content, an metabolite of lipid peroxidant, were found higher in gastric mucosa of patients with HP gastritis[32] and in N-methyl-N’nitro-N-nitrosoguanidine induced gastric cancer in rats[33]. In our experiment, the MDA content of gastric mucosa in the model rats increased significantly, which implied that the free radicals participated in the occurrence of gastric precancerous lesions. And the reduction of mucosal MDA content in JPYW treated groups indicates that JPYW has a protective action on gastric mucosa.

We also noticed that the hexosamines content, which partially represented the function of gastric mucosal barrier[34] decreased obviously in gastric mucosa of model rats, and only increased slightly in JPYW treated groups with absence of statistical differences. This suggests that the therapeutic effects of JPYW in gastric precancerous lesions dose not involve hexosamine content.

In conclusion, JPYW has therapeutic effects on gastric precancerous lesions, it increases GMBF and reduces mucosal MDA content which may also play a role in its mechanism of action.