METHODS: Spague-Dawley rats were injected with endotoxin, TNF-α, and IL-6, respectively and part of rats injected with endotoxin was treated with exogenous somatotropin simultaneously. All rats were killed at different time points. The expression of IGF-I, GHR, SOCS-3 and β-actin mRNA in the liver was detected by RT-PCR and the GH levels were measured by radioimmunoassay, the levels of TNF-α and IL-6 were detected by ELISA.

Infection especially severe intra-abdominal infection is characterized by catabolic status associated with severe protein loss and negative nitrogen balance[1-7]. Meantime, the levels of many important hormones such as glucocorticoid, insulin and growth hormone (GH) do not decline, but their biological activities have reduced obviously. Critical illnesses such as sepsis, trauma and burns can usually cause a elevated level of growth hormone at early stage, however the insulin-like growth factor I (IGF-I), which is a growth hormone-dependent growth factor that inhibits protein breakdown, has been showing decreased predominantly, this phenomenon indicating a status of growth hormone insensitivity[8-12]. In this condition, the administration of high doses of recombinant human growth hormone could not improve negative nitrogen balance, in contrary, it may lead to other metabolic disorders and result in increased morbidity and mortality[13].

Endotoxin is generously released into blood under the infected condition and stimulates the production of proinflammatory cyotkines such as TNF-α, IL-6, and IL-1[14-18], which play very important roles in inducing the GH insensitivity. The GH insensitivity can occur at receptor and post-receptor levels, the receptor level associates with down-regulated GHR mRNA expression[19,20]; the post-receptor insensitivity mainly occurs on the intracellular signal transduction pathway of growth hormone. Recent studies have suggested that the SOCS protein family, especially SOCS-3 play a very important role on this level[21,22]. In this study, we investigated whether the GH insensitivity could be induced by LPS, TNF-α and IL-6 iv injection, and what kind of roles they played.

All experimental procedures were carried out in compliance with the appropriate institutional and national ethical guidelines for work with laboratory animals. 156 adolescent male Spague-Dawley rats (240-260 g) were obtained from animal center of Jinling Hospital (Nanjing, China). They were given free access to food and water for three days before experiments.

Male Spague-Dawley rats (provided by Animal Center of Jingling Hospital), weighing 250 ± 10 g, were given free access to food and water for three days before experiments. Rats were anesthetized with ether and received LPS, GH, TNF-α, IL-6, and saline injection, LPS, TNF-α, and IL-6 were administered through superficial dorsal veins of penis and GH was injected subcutaneously. All rats were killed at different time points; blood of rats with LPS injected was collected and centrifuged at 500 g for 10 min at 4 °C to collect serum. Livers were removed, flash-frozen in liquid nitrogen, and stored at -80 °C until homogenate preparation and RNA extraction.

Effect of endotoxin on liver expression of IGF-I, GHR, and SOCS-3 mRNA

Effect of GH on liver expression of IGF-I, GHR, and SOCS-3 mRNA along with endotoxin injection

Analysis of mRNA by RT-PCR

Freshed-frozen liver samples were homogenized and total RNA was performed using TRIZOL Reagent (Biobasic Inc, Scarborough, Ontario, Canada). With Access RT-PCR system kit (Promega Coporation, Madison, WI), the cDNA synthesis and amplification was done in one tube following the manufacture's instructions. In brief, 1 μg RNA, 1 μM primers for SOCS-3, GHR, IGF-I and β-actin were added to each reaction mixture respectively, which included 0.2 mM dNTP, 1 mM MgSO4, AMV reverse transcriptase 5 U, Tfl DNA polymerase 5 U, and AMV/Tfl 5 × buffer 10 μL. The reaction final volume was 50 μL and was covered with 30 μL mineral oil. RT-PCR reaction was run in the following procedures: (1) Reverse transcription: 48 °C for 45 min, 1 cycle. (2) AMV RT inactivation and RNA/cDNA/primers denaturation: 94 °C for 2 min, 1 cycle. (3) Second strand cDNA synthesis and PCR amplification: denaturation 94 °C for 30 s, annealing 60 °C for 1 min, extension 68 °C for 2 min, 28 cycles for SOCS-3 and 21 cycles for GHR and IGF-I, β-actin as intra-control to be amplified along with SOCS-3, GHR and IGF-I. (4) Final extension: 68 °C for 7 min, 1 cycle. 5 μL each RT-PCR reaction was electrophoresed in a 1.7% Metaphor agarose (FMC Bioproducts, Rockland, ME) gel and stained with ethidium bromide. Products of RT-PCR reactions were photographed and analyzed by densitometry. The expression of IGF-I, GHR, and SOCS-3 mRNA in laboratory group is represented as a percentage or times compared with their expression in control group.

Blood was obtained from the inferior vena cava at the time of sacrifice. Serum growth hormone levels was measured by radioimmunoassay according to manufacture's instructions (Northern Isotope Co, Beijing, China). Serum samples were analyzed for TNF-α and IL-6 content by enzyme-linked immunosorbent assay according to manufacture's instructions (BioSource International, Camarillo, CA).

All data are expressed as means ± SEM. Correlation between data was analyzed with linear regression. Comparisons between two groups were performed using an unpaired Student's t test. Differences were considered statistically significant when P < 0.05.

The levels of serum growth hormome at each time points after LPS injection had no significant difference compared with control rats, it maintained a relatively stable status (Table 1). 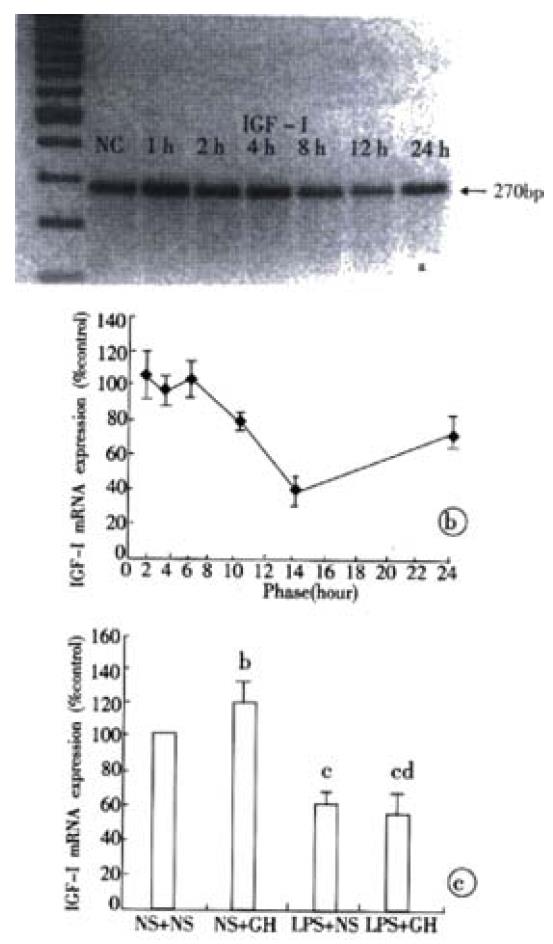 Liver GHR mRNA expression had already down-regulated by 45% at 2 hours after LPS injection, the lowest regulation occurred at 8 hours, which was a 89% decrease compared with control rats. After 24 hours, it did not recover to the normal level and had a 44% decrease (Figure 2A, Figure 2B). the exogenous GH administration had no effect on the liver GHR mRNA expression in control and endotoxemic rats (Figure 2C). 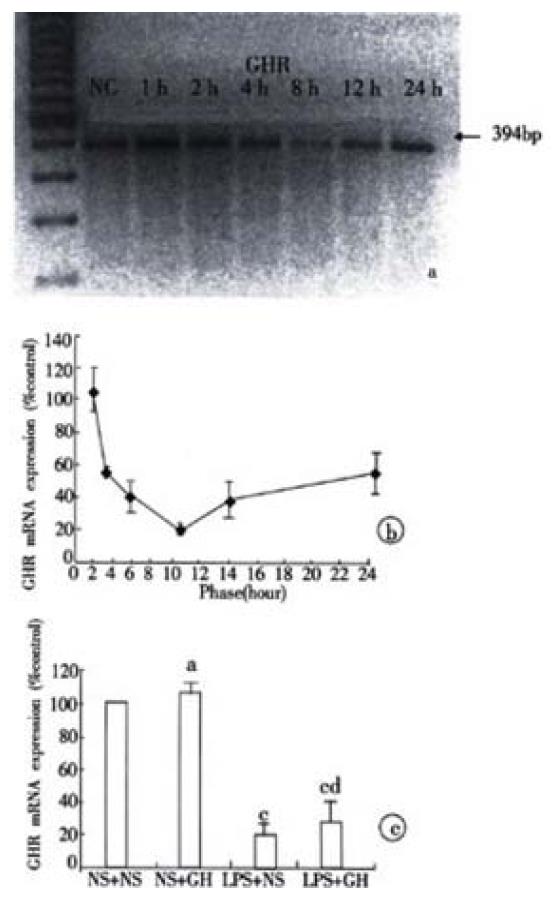 The liver SOCS-3 mRNA was weakly expressed in control rats, however, it was strongly up-regulated by 7.84 times vs. control rats at 1 hour after LPS injection. This level was maintained at 2 hours and it still had a 1.8 times increase at 24 hours (Figure 3A, Figure 3B). the exogenous GH infusion had no effect on the liver SOCS-3 mRNA expression in control and endotoxemic rats (Figure 3C). 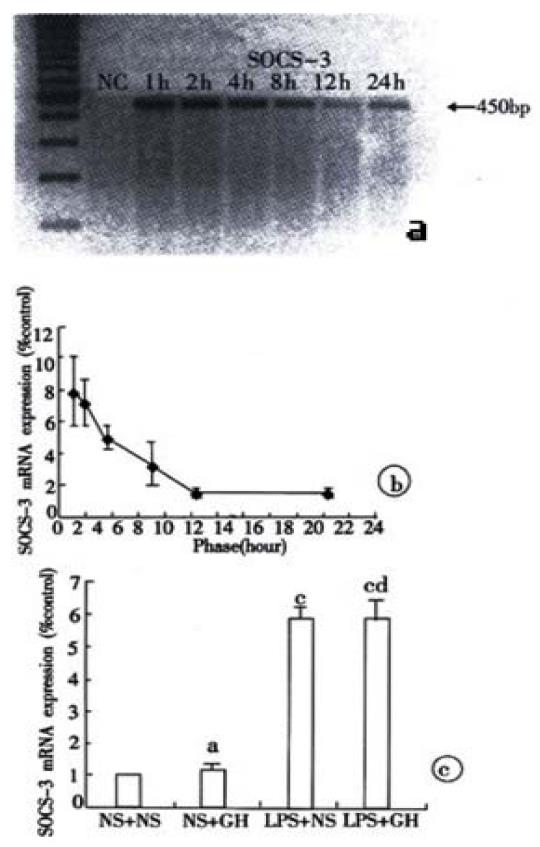 The TNF-α level was increased rapidly after LPS injection, but it decreased obviously from the second hour and returned to the normal level at 4 h. The IL-6 level was also elevated rapidly after LPS injection; it got to the highest level at 2 h and then decreased gradually (Table 2). Linear regression analysis was shown a positive correlation of IL-6 with liver SOCS-3 mRNA expression (r = 0.935, P < 0.01). 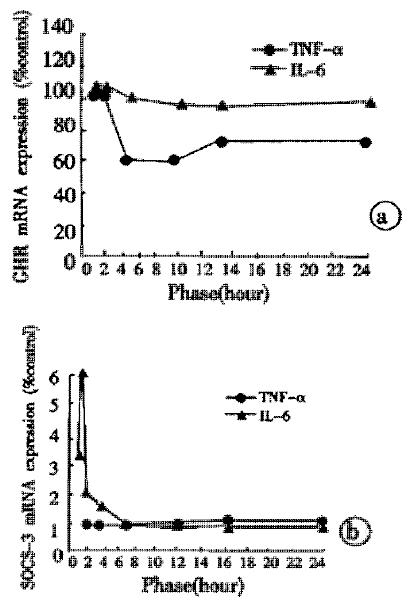 Figure 4 LiverGHR (A) and SOCS-3 (B) mRNA expression response to TNF-α and IL-6 iv injection at different time points.
DISCUSSION

In this report, using an experimental method of E. coli endotoxin infusion in laboratory rats, we have found endotoxin-induced growth hormone insensitivity. At 12 hours after LPS injection, there was no difference in serous growth hormone concentration between the experimental and control rats, however, the liver IGF-I mRNA expression had already declined obviously. In control rats, the liver IGF-I mRNA expression was up-regulated by 25% after exegeous GH administration, but in endotoxemic rats, GH did fail to prevent the decline in liver IGF-I mRNA expression. Several groups have observed that decreased IGF-I may result from a state of GH insensitivity. Ross et al[8] reported low circulating IGF-I levels in critically ill patients despite elevated GH secretion. More recently, the sdudy[19] showed that after a single injection of LPS in rats, plasma IGF-I level remained low despite the fact that GH level had returned to normal value. In agreement with these authors, our study support the possibility that the GH insensitivity maybe one of the important factors for the reduced liver IGF-I mRNA expression after LPS injection.

The factor of post-receptor level GH insensitivity has caused more and more attention recently, and it is associated with a novel family of suppressor of cytokine signalling (SOCS) which includes eight members (SOCS-1 to SOCS-7 and CIS) that act in a classical negative feedback loop to regulate cytokine signal transduction[24-29]. SOCS-3 is a strong inhibitor on growth hormone intracellular signal transduction[30-32].

Once growth hormone binds to its receptor, the intracellular signal transduction is activated through JAK-STAT pathway[33,34]. The first activated tyrosine kinase is JAK2, which promotes the tyrosyl phosphorylation of both JAK2 itself and signal transducer and activator of transcription 5b (STAT 5b). Phosphorylated STAT 5b causes its dimerization and then the dimerized STAT 5b translocates into the nucleus, where it binds with high affinity to the promoters of various target genes and then activates the gene transcription such as IGF-I. SOCS-3 can block the GH intracellular JAK/STAT-dependent signaling pathway at different levels[35-44], including Competitively inhibits the phosphorylation of STAT 5b. Binds to GHR and leads to the degration of GHR-JAK2 compound directly or indirectly through Elongin B and Elongin C, in the end the JAK2 kinase loses its activity. Through binding to GHR, SOCS-3 can inhibit the JAK2 kinase activity directly. Our experiment observed that after LPS injection, liver SOCS-3 mRNA expression was rapidly up-regulated with a 7.84 times increase at 1 hour compared with the weak expression in control rats, this indicating that LPS induced the production of post-receptor GH insensitivity.

The in vivo biological activities of LPS are largely mediated by the production of proinflammatory cytokines such as tumor necrosis factor-α (TNF-α), interleukin-1β (IL-1β), and IL-6[45-50], which is illustrated in our experiment by the marked stimulation of the secretion of TNF-α and IL-6 in blood. TNF-α and IL-6 had different roles in inducing the GH insensitivity, TNF-α injection leading to a reduced expression of liver GHR mRNA, and IL-6 being associated with the up-regulated SOCS-3 mRNA expression after injection. The elevated IL-6 levels stimulated by LPS had significant positive correlation with the increased liver SOCS-3 mRNA expression induced by LPS.

The mechanisms of TNF-α-induced GHR mRNA suppression was mostly mediated by inhibition of Sp transactivator binding to the L2 promoter of GHR gene[51], the other way might be associated with some other cytokines stimulated by TNF-α, such as IL-1[52].Both IL-6 and GH, belonging to the cytokine receptor superfamily, can transduce their signal from cell surface to nucleus through the same JAK-STAT pathway[53-55]. Hence, the elevated IL-6 levels stimulated by LPS promoted the increased expression of SOCS-3 mRNA, which not only had a negative feedback to IL-6 biological activities, but also inhibited the GH intracellular signal transduction[56-60].

In summary, our study observed that the growth hormone insensitivity could be induced by endotoxin, which suggested that the endotoxin played a very important role in inducing the GH insensitivity. The endotoxin not only had predominant effect on the GHR gene expression, but also induced the phenomenon of negative feedback loop at post-receptor level. The toxic effect of endotoxin was mostly mediated by TNF-α and IL-6 indirectly, and TNF-α maily had effect on the receptor gene expression, but for IL-6, it mainly caused the negative feedback loop at post-receptor level.