AIM: To establish an experimental model for exploring the role of hepatitis C virus (HCV) in the development of cholangiocarcinoma.

METHODS: Recombinant plasmid of HCV-core gene was constructed with molecular cloning technique and transfected into QBC939 cells with lipofection. After it was selected with G418, resistant colonies were obtained. The colonies were analysed by immunocytochemistry and Western blotting.The morphology was observed under transmission electron microscope(TEM) and microscope.

RESULTS: The recombinant plasmid was proved to carry the target gene by PCR and restriction enzymed mapping. Moreover, it could express HCV-C protein efficiently in QBC939 cells. The HCV-like particles were found in the cytoplasm by electron microscope, which were spherical with a diameter of 50 nm-80 nm possessing outer membrane.The transfected cells had lower differentiation and higher malignant degree under microscope.

Cholangiocar cinoma is the second cancer of hepatobiliary system. The incidence and mortality of cholangiocarcinoma are increasing yearly.There are 3000 new patients in America each year. Recent reports showing the expression of HCVRNA and HCV antigents in cholangiocarcinoma[1-8], have provided new insights into the pathogenesis of cholangiocarcinoma. Hepatitis C virus(HCV) is recognized as a kind of serious infectious source to harm the health of the humans.It could lead to cancer[9-17].Moreover,its core protein could act as a transcriptional regulator of various viral and cellular promoters to potentially disrupt normal cellular functions[18-21]. Thus, the function of core protein is important for carcinogenesis.We constructed the recombinant plasmid of HCV core gene with molecular cloning technique and transfected into cholangiocarcinoma cells with lipofection, and established an experimental model for exploring the role of HCV in the development of cholangiocarcinoma.

Plasmids and bactrium strain PBK-HCV encompassing the core and envelope genomic regions of HCV,containing 330 nt-2020 nt of HCV II strain, was provided as a gift by Dr.Chen (Institute of Infectious Disease, Zhejiang University), whose restriction sites were PstI and EcoRI.The prokaryotic expressing vector of PBK-CMV containing MCS(multiple cloning site),the neomycin- and kanamycin-resistance gene, SV40 poly(A), was purchased from Stratagene Co. E.coli JM109 was obtained from the collection kept in our research group.

PCR amplification PCR amplification was done using the PBK-HCV as a template and primers 1 and 2 as primers.The reaction was performed according to the parameters of 94 °C 3 min, 94 °C 1 min, 55 °C 30 s and 72 °C 1 min for 35 cycles.Then it was extended 10 min at 72 °C. The amplified fragment (approx 600 bp)was analyzed by 9 g·L-1 agarose-gel electrophoresis.The product was purified and used for DNA recombinction.

DNA recombination DNA recombination was performed according to the methods described in reference[22]. A 0.6 kb fragment,containing HCV core gene,was obtained from the PCR product after digestion with SalI and BamHI.The fragment was recombinated into plasmid PBK-CMV and the resulted recombinant plasmid was designated as PBK-HCVC (Figure 1). 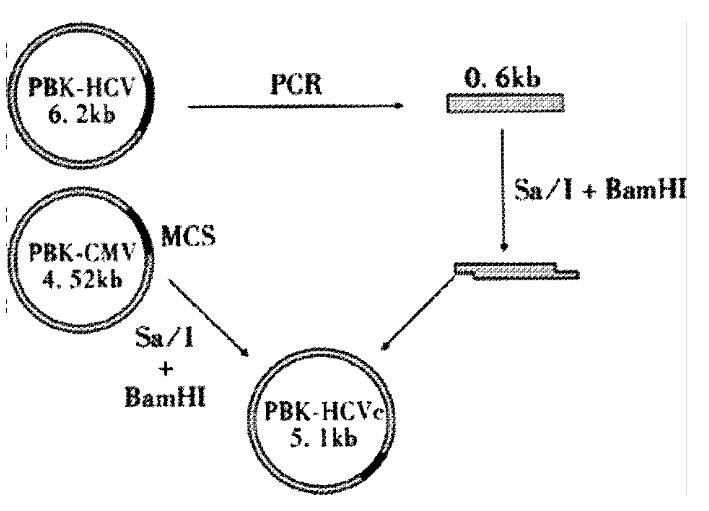 Transfection of cells Transfection was performed with lipofection.The constructed vector and control plasmid were used to transfect QBC939 cells in culture. Seven-two h after transfection, they were selected with G418. Then the cells were harvested and used for the detections.

Western blotting Detection of HCV core protein by immunoblotting was performed. Briefly,cells (1 × 106) were scraped,centrifuged briefly,and lysed for 30 min on ice in 50 mmol·L-1 Tris-cl(pH 7.5), 150 mmol·L-1 NaCl, 0.2 mmol·L-1 EDTA, 1 mmol·L-1 PMSF and 10 g·L-1 NP-40. The samples were cleared by centrifugation(140000 r·min-1,30 min,4 °C),and assessed for protein concentration.SDS-PAGE was performed,and proteins were electroblotted onto nitrocellulose membranes.After 1h incubation in blocking solution,the membrane was exposed to the primary antiobody 2 h at 4 °C.After washing in PBS,the secondary AP-labeled antibody was added for 2 h at room temperature.The proteins were visualized with NBT-BICP.

RESULTS
Identification of reconstructed plasmid by PCR and restriction enzymes

The reconstructed plasmid was amplified by PCR, using the PBK-HCVc as a template and primers 1 and 2 as primers, the reaction was performed according to the same parameters. PCR product was approx 600 bp(Figure 2). Then it was identified by the digestion with restriction enzymes(SalI and BamHI). Fragments of 4500 bp and 600 bp were produced from the digestion. It was proved to carry the target gene(Figure 3). 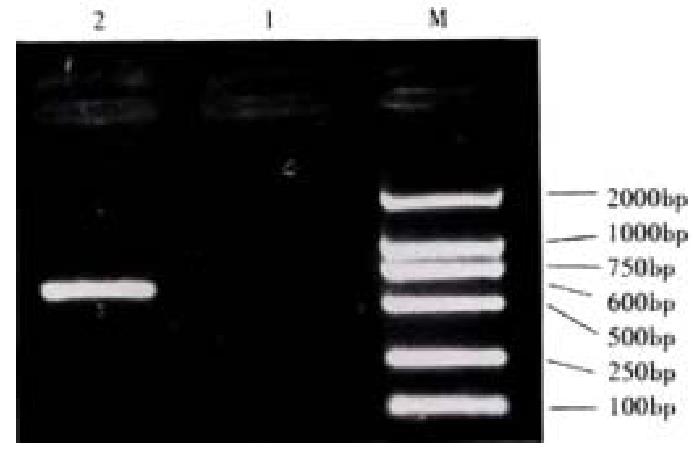 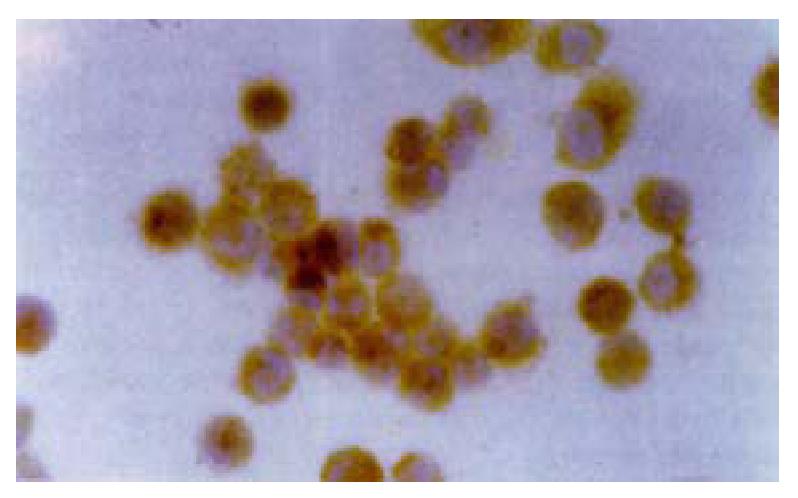 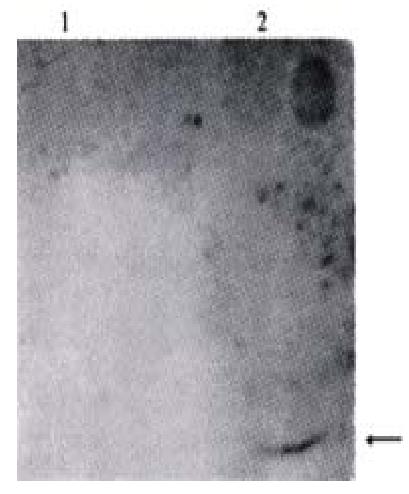 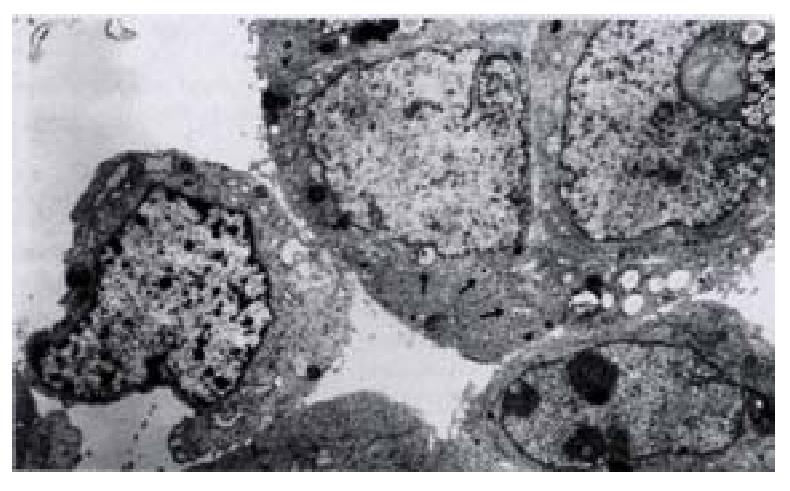 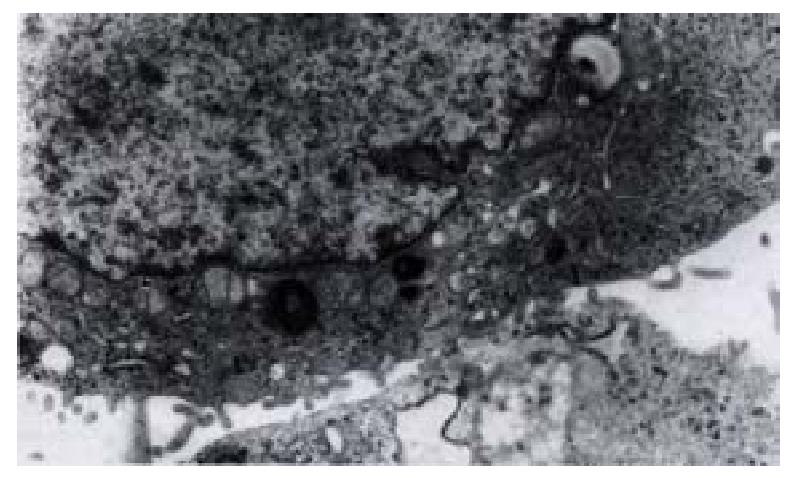 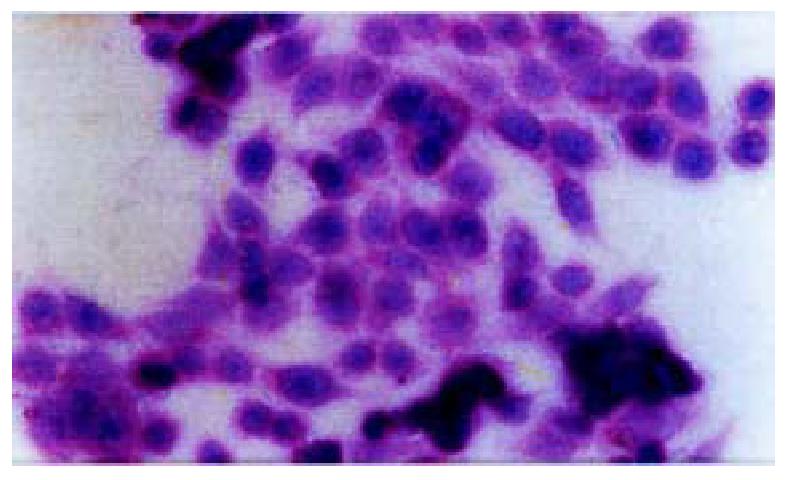 Figure 8 The morphologic alteration of the transfected cells HE. × 200
DISCUSSION

The pathogenesis of cholangiocarcinoma is not clear. Cholelithiasis,cystic dilation of the biliary system,ulcerative colitis and primary sclerosing cholangitis are thought to be the risk factors for cholangiocarcinoma.Recently, laboratory and epidemiological studies found and epidemic found the infection of HCV was related to the development of cholangiocarcinoma [1-8,23-25].But the mechanism of how they are related has not been studied deeply. HCV infection is an important cause of morbidity and mortality worldwide,causing a spectrum of liver diseases ranging from an asymptomative carrier state to end-stage liver disease.The most important feature of persistent HCV infection is the development of chronic hepatitis in half of the infected individuals and the potential for disease progression to hepatocellular carcinoma.In our country there are 30-40 million of HCV-carriers patients[26-28].

HCV are hepatotropic viruses.Viral replication and cellar injury are largely confined to the liver.Recent studies,however,have suggested that HCV may replicate in tissues other than in hepatocyte only. Many scholars have reported the presence of HCVRNA and HCV-antigens in lymph nodes, pancreas, ovary, kidney, heart and bile duct epithelial cells[29-35]. The infection of HCV could lead to bile duct damage and loss. Moreover,bile duct injury is more commonly associated with HCV than either HBV or autoimmune hepatitis,which is the characteristic histologic feature of HCV. The bile duct damage and loss are defined as variable epithelial, steatosis,lymphocytic infiltration of bile ducts[36-38].The more injury of HCV infection in bile duct provides new evidence that bile duct epithelial cells could be an important reservoir of HCV and might lead to the pathogenesis of cholangiocarcinoma. An HCV genome contains a linear,positive-strand RNA molecule of 9500 nucleotides encoding a single ployprotein precursor of 3000 amino acids.The polyprotein is cleaved by viral proteases to generate three putative structural proteins(C, E1 and E2) and at least six nonstructural proteins(NS2,NS3,NS4A, NS4B, NS5A and NS5B)[39,40]. The genomic region encoding the putative C protein is also called core protein. The HCV core protein could act as a transcriptional regulator of various viral and cellular promoters to potentially disrupt normal cellular functions[18-21]. The core protein may cooperate with ras oncogene and transform primary rat embryo fibroblasts to a tumorigenic phenotype[41]. It may also cause anti-apoptosis by ressive of tumor suppressor gene-p53 and activation of NF-κB and implicate a mechanism by which HCV may evade the host immune surveillance leading to viral persistence and possibly to carcinogenesis[42-51]. Thus,the HCV core protein plays a major role in the malignant transformation of cells. It is important to explore the role of HCV in the development of cholangiocarcinoma by establishing an experimential model which expresses efficiently HCV core protein in cholangiocarcinoma cell lines.

In our study, recombinant plasmid of HCV-core gene was constructed with molecular cloning technique,it was identified by restriction enzymes.Then it was transfected into QBC939 cells with lipofection.After it was selected with G418 made by the presence of the necomycin and kanamycin resistance gene, resistant colonies were obtained. The colonies were analysed by immunocytochemistry and Western blotting. The results suggest that the recombinant plasmid was proved to carry the target gene by PCR and restricted enzyme map, and it could express HCV core protein efficiently in QBC939 cells.The morphology was observed under transmission electron microscopy(TEM), and the HCV-like particles in the cytoplasm, were found spherical with a diameter of 50 nm-80 nm possessing outer membranes. Moreover, we also found that the splits of nuclei were increased in transfected QBC939 cells with PBK-HCVC, and the exent of differentiation was reduced. It suggested that the malignant degree was enhanced after QBC939 cells were transfected with PBK-HCVC. Because HCV-core gene could express steadily in cholangiocarcinoma cells, the transfected tumor cells(QBC939-HCVC) could be used to study the effect of HCV in the development of cholangiocarcinoma.