AIM: To discover the relationship between the genotype and antigen serotype of flagellin C among Salmonella strains.

METHODS: Fragment of Salmonella flagellin C in plasmid pLS408 was cloned, sequenced and compared with the corresponding sequence in other strains. Salmonella strains including two typhi strains, one paratyphoid strain, one enteritidis and one typhimurium strain were isolated from outpatients. Genome DNA was purified respectively from these clinical isolates, then the corresponding flagellin C fragment was amplified by polymerase chain reaction, and the amplification products were analyzed by agarose gel electrophoresis.

RESULTS: The cloned fragment includes 582 nucleotides encoding the variable region and partial conservative region of Salmonella flagellin C in plasmid pLS408. With comparison to the corresponding sequences reported previously, there is only a little difference from other strains with the same flagellar serotype in both nucleotide and amino acid level. Specific PCR products were amplified in Salmonella strains with flagellar serotype H-1-d including S. muenchen, typhi and typhimurium, but not in S. paratyphoid C or S. enteritidis strains.

CONCLUSION: In this experiment, the specificity of nucleotide sequence could be found in flagellin C central variable regions as it exists in flagellar serotypes in Salmonella. It may be helpful to developing a rapid, sensitive, accurate and PCR-based method to detect Salmonella strains with serotype H-1-d.

Bacteria of genus Salmonella are both major and minor pathogens that cause disease outbreaks that arise from single incidents of breakdown in food hygiene. Much effort has been devoted to methods that differentiate these organisms in order that a given outbreak may be traced to its source and breakdown. Serological analysis of the surface antigens, such as flagellar antigen, has been proven to be the most suitable approach and has resulted in the recognition of a large number of serotypes.

According to the standpoint that phenotype is determined by corresponding genotype, it is reasonable to think that the differentiation in the variable region of flagellin may be reflected by the nucleotide sequence. Detection of nucleotide difference by specific amplification may be helpful for the diagnosis and typing of Salmonella.

MATERIAL AND METHODS
Strains and plasmid

Salmonella 5930, which contains plasmid pLS408, was offered by Professor Stocker (Stanford University School of Medicine). Plasmid pUC18 and Eschrichia coli. DH-5α was stored in our laboratory. Salmonella strains including two typhi strains, one paratyphoid strain, one enteritidis and one typhimurium strain were isolated from outpatients, and samples were stored in Department of Bacteriology, Xijing Hospital.

Plasmid pLS408, in serted with the complete sequence of flagellin C from S. muenchen[1], was prepared as template by plasmid purification kit (Shanghai Watson Biotech. LTD). Primers, including EcoRV and KpnI sites for convenient cloning, were designed referring to the complete sequence of flagellin C in S. muenchen and S. typhi. Forward primer: 5’-GCAGGATATCTTCCTCGAGACCACAGTTGCGGCTC-3’; reverse primer: 5’-TGCGCCAGAACGGAGGTACC-3’. PCR product was digested by EcoRV and KpnI, ligated to pUC18 digested by HinCII and KpnI and sequenced in Sangon.

Genome DNA was prepared by genome purification kit according to the Watson’s Handbook for DNA Isolation and Purification. Amplification was performed by two-step polymerase chain reaction, i.e. preheating at 94 °C for 5 min, then denaturing at 94 °C for 45 s and annealing at 68 °C for 1 min, 30 cycles with a final extension at 72 °C for 10 min. Amplification products were analyzed by 1.5 g•L¯¹ agarose gel electrophoresis.

The map of plasmid pLS408 and the result of agarose gel electrophoresis of fliC PCR product were demonstrated (Figure 1).

The amplification product includes 582 nucleotides encoding variable region and partial conservative region of flagellin C. In comparison with the corresponding sequences reported before, there is only a little difference from other strains with the same flagellar serotype in both nucleotide and amino acid level (Figure 2, Figure 3). Compared with the known S. muenchen sequence, there are three single-nucleotide insertions, which cause frame shift and ten amino acid changes (166-195). There are three single-nucleotide mutations, which cause two missenses (23:C to T, 136:G to A) and one silent mutation (216: G to T), and a double-nucleotide mutation (281, 282: TA to AT) and a three-nucleotide short fragment mutation (217, 218, 219: CTC to GCT), which causes one missense mutation, respectively. Thought here are some differences between the sequence here and that derived from the ot her S. muenchen strain, it is conservative highly with the corresponding seq uence in Salmonella strains with the same flagellar serotype. 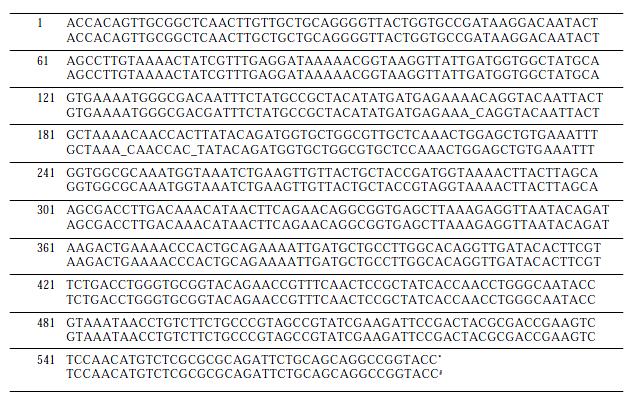 By polymerase chain reaction, amplification products appeared only in those salmonella strains with specific flagella antigen type (H-1-d) as S. mue nc hen, typhi or typhimurium, but not in S. paratyphoid C or S. enteritidis (Figure 4). 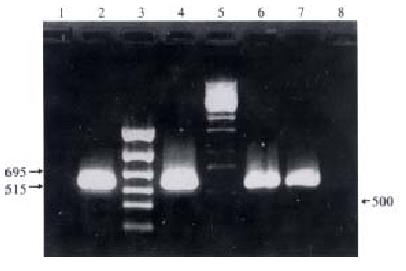 Flagella is a necessary organelle for bacterial motility and its biological behavior is well controlled[2-23]. The flagellar filament is composed of a single protein, flagellin. Serological analysis has proved that diverse types exist among different Salmonella strains[24-26]. The amino acid sequence of flagellin has been assigned to four domains of flagellin subunit structurally identified in the filament structure, based on biochemical, immunological and structural information[27,32]. The terminal regions form the core of the filament and the central regions form the outer part. Despite the high conservatism in terminal regions, the great divergence in central regions was discovered in both amino acid and nucleotide sequence among the different Salmonella strains. This point was also strongly supported by our experiments.

By comparison with other sequences in Genbank, we found the conservatism of flagellin C central regions among the different strains with the same flagellar antigen type. It is the foundation for the design of primers. In this experiment, primers were designed by software (primer 3 on the Internet) to amplify the flagellin C gene with specific antigen type H-1-d. The sequence of flagellin C variable region in S. muenchen was sequenced and compared with other sequence. The cloned fragment was highly aligned with other strains. In fact, the specific amplification occurred in all isolates with H-1-d serotype like S. muenchen, typhi or typhimurium, but not in other serotypes like S. enteritidis or typhoid C strain and the negative amplification was found in other bacteria like Helicobacter pylori is olates or Eschrichia Coli. strains (data not shown).

As a developed tool, PCR-based technique has been widely used in both basic and clinical research[33-58]. In bacterial taxonomy, PCR-based genotype typing is complementary to serological typing[59-61]. Furthermore, as a rapid and convenient method, polymerase chain re action is very helpful to the detection of many microbes like H. pylori, Salmonella, crypt ococcal neoformans and many other microbes[62-66]. In this experiment, the specificity of nucleotide sequence could be found in central variable regions of flagellin C as it exists in flagellar serotypes in Salmonella.

In summary, the specificity of nucleotide sequence was found in central variable regions of flagellin C as it exists in flagellar serotypes in Salmonella in this experiment. It may be helpful in the development of a rapid, sensitive and accurate method to detect Salmonella strains with serotype H-1-d.