AIM: To study the genetic alteration in ACF and to define the possibility that ACF may be a very early morphological lesion with molecular changes, and to explore the relationship between ACF and colorectal adenoma even carcinoma.

METHODS: DNA from 35 CRC, 15 adenomas, 34 ACF and 10 normal mucus was isolated by means of microdissection. Direct gene sequencing of K-ras gene including codon 12, 13 and 61 as well as the mutation cluster region (MCR) of APC gene was performed.

CONCLUSION: ACF might be a very early morphological lesion in the tumorogenesis of colorectal tumor. The morphological feature and gene mutation status was different in ACF and adenoma. ACF is possibly putative "microadenoma" that might be the precursor of adenoma. In addition, the development of a subgroup of colorectal carcinomas might undergo a way of "normal epithelium→ACF→carcinomas".

Colorectal cancer (CRC) is a complex pathological procedure in which multiple genes are involved during multiple steps. It is widely accepted that the order of "normal epithelium→hyperplastic epithelium→adenoma→cancer→cancer with metastasis" exists in majority of coloretal carcinoma[1,2]. The corresponding molecular order is demonstrated as follows: APC→altered methylation[3]→K-ras→MCC/DCC→P53. The activation of K-ras gene and inactivation of APC gene are frequent early events in the carcinogenesis of colorectal carcinoma[4-8]. Recent studies showed that aberrant crypt foci (ACF) is the earliest morphological lesion detectable in colorectal epithelium[9,10]. We studied CRC, adenoma and ACF with the aim to understand the relationship between ACF and colorectal neoplasm.

Thirty-five CRC were obtained from an unselected cohort in which the patients underwent initial curative resection in 1999 in the Cancer Hospital of Fudan University. Twenty CRC occurred in men and 15 in women. The age of the patients ranged from 28 to 85 years. The median age was 54.2. Fourteen of 35 patients had their tumor in proximal colon, and 21 in the distal part of large intestine (including rectum). Macroscopically, 22 were ulcerative type with more endophytic extension and 11 showed exophytic growth (including rape flower like polypoid and nodal). Histologically, 6 were highly, 22 were moderately and 7 were poorly differentiated. Fifteen adenomas during the same time period were collected from 9 men and 6 women. In histological type, 5 were tubular, 6 tubular villous, and 4 villous adenoma. The macroscopically normal epithelium 5 cm apart from the tumor site served as ACF study and that 10 cm at least apart from the primary tumor as normal control.

Identification of ACF and histological microdissection

Cryostat frozen sections (5 μm, stained with 0.1% methylene blue for 5 min) of epithelium 5 cm apart from the primary tumor were used for identifying ACF according to Shpitz and Gregorio et al[11-15]. ACF was determined by two qualified pathologists when the following features appeared: large crypts, tight arranging, dark and overlapping nuclei, dysplastic morphology, "saw tooth like" and elongated luminal surface, follicular distribution and no inflammation cells or lymph follicle (Figure 1). Ten slides of 8 μm from 10 normal epithelia, 34 identified ACF and 35 CRC were stained with methylene blue and subsequently microdissected under the dissect microscope (40 folds). Individual crypts from CRC, adenoma, ACF and normal epithelium were isolated with scalpels and transferred to the centrifuge tube for DNA extraction. One crypt or about 100 cells from each case were used for the study[16] (Figure 1). 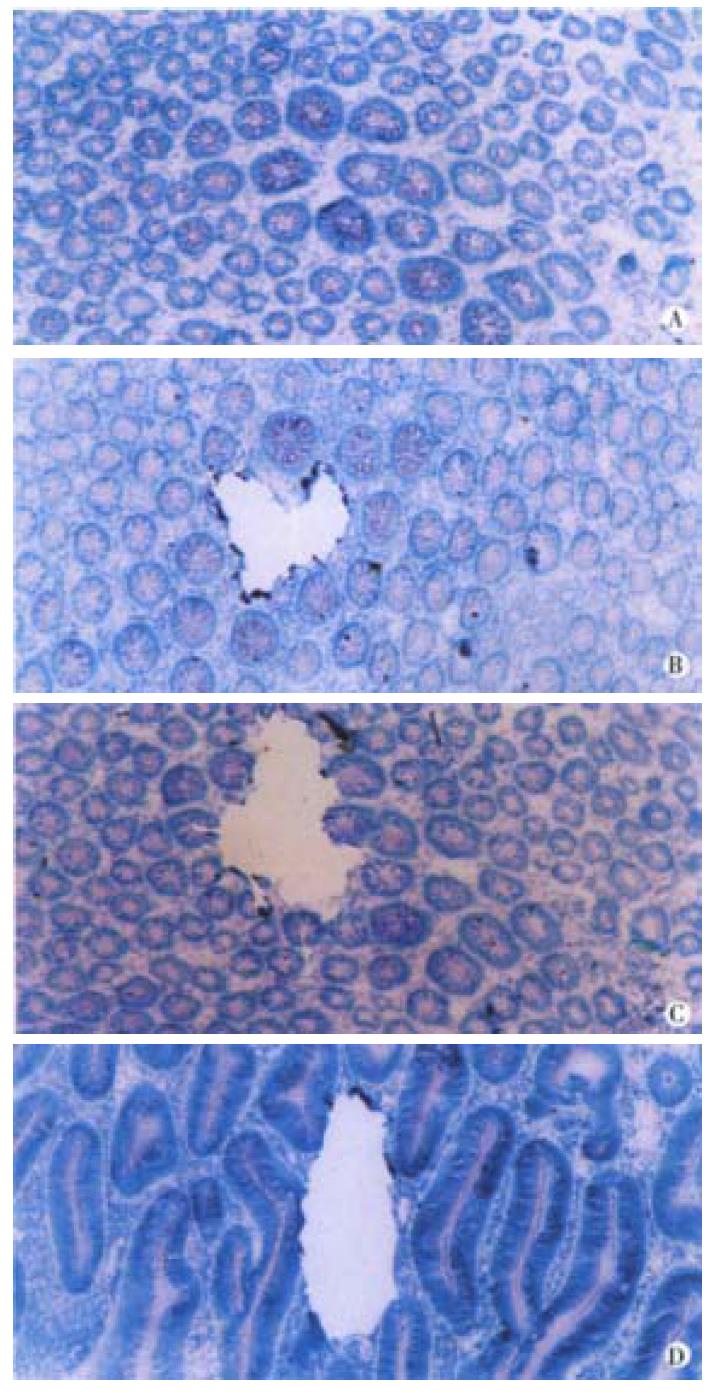 PCR products were purified with QIAquick PCR kit as described. Sequencing reaction was performed with Ready Reaction Kit from PE Company (96 °C10″→55 °C5″→60 °C4′，25 cycles). The reaction product was precipitated in 100% ethanol (2.5 volume) and 3 M NaAc (0.1 volume), and washed with 75% ethanol. The precipitation was resuspended in TSR (template suppression reagent), denatured at 94 °C and snap cooled at 4 °C before the automatic electrophoresis.

Chi-square study was used for the comparison between two groups.

APC gene mutation and its feature

Eight out of 35 carcinomas (22.9%) and 4 of 15 adenomas (26.7%) showed mutation in APC gene. The mutation frequency was close in two tissue types (P > 0.05). Only 1 of 34 ACF showed mutation. APC gene mutation in carcinoma was not related to the age, gender, tumor site, macroscopic type and histological differentiation. All 8 mutations were scattered in region A (2 cases), region B (4 cases), and in region C and D (1 case), respectively. Among the 4 cases of adenomas with APC mutation, 2 were villous adenomas and other two were villous tubular adenomas; 2 mutations in region A, 1 in region C and 1 in region D. A mutation in region A was demonstrated in both ACF and primary carcinoma (Figure 2). APC gene mutations were displayed in Table 2. Altogether 13 mutations were detected in regions A→D of APC gene, 5 were stop codon, 1 was nonsense mutation, the other were point mutation. 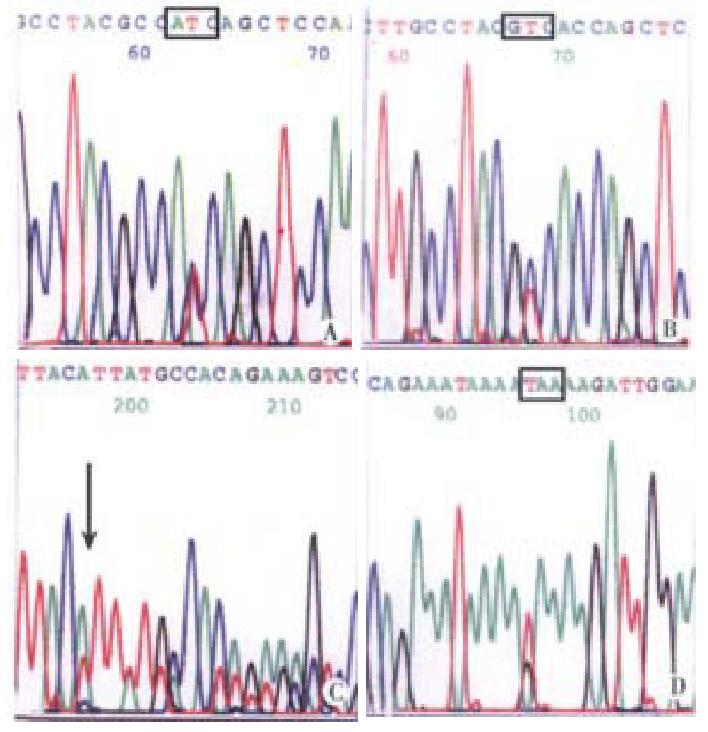 In 1987, Bird[24] established a mouse model of colorectal carcinoma by injecting F334 mouse with carcinogen AOM. He observed the changes of methylene blue stained large intestine mucus in different stages and found for the first time the earliest morphological change in normal colorectal mucus. Several or dozen aberrant crypts, scattering in the crypt level, were termed as aberrant crypt foci. It is recently reported that similar lesions exist in the human colorectal epithelium apart from the carcinoma[25-27]. The order "normal epithelium→metaplasia→adenoma→carcinoma→carcinoma with metastasis" is widely accepted by most authors. APC and K-ras gene mutation is the early event in the carcinogenesis[28-30]. Our results revealed that normal epithelium showed no mutation, but K-ras gene mutation appeared in ACF, adenoma and carcinoma with a close rate (P > 0.05), suggesting that K-ras mutation initiates in ACF stage and maintains during the process of the carcinogenesis. This demonstrates the possible relationship of ACF to carcinoma and ACF as a preneoplastic lesion in the carcinogenesis of colorectal carcinoma[31,32]. K-ras gene point mutation at codon 12 and 13 endows the epithelium with transformation ability. All mutations in carcinoma and adenoma located at codon 12 (4/6), while 1/3 mutation (2/6) of ACF was found at codon 13 (GGC→GAC). In the previous reports by American and European scientists, the K-ras gene mutation located both at codon 12 and 13, more frequently at codon 12[16,33-37]. Japanese and Chinese scientists reported the similar results as ours[22,38,39], the mutation in carcinoma limited in codon 12. The reason might be the difference in the genetic predisposition, the food, the environment and the pathogeny. The cell clone with mutation at codon 13 might have weaker clone selection and such cells have, therefore, weaker ability to expand themselves to grow out. ACF is reported to be located more frequently in rectum than in colon, more in distal than in proximal colon[40]. All 6 ACF with K-ras gene mutation in the current study located in distal colon, implying the same site of predisposition of colorectal carcinoma. ACF might be the earliest morphological lesion with detectable molecular genetic alteration in it.

APC gene was cloned, isolated and defined as a tumor suppressor gene in 1990. Germline mutation of the gene is responsible for the pathogenesis of familial adenomatous polyposis (FAP). Thirty-five sporadic CRC and 15 adenomas had similar frequent APC gene mutation in the MCR (P > 0.05). It is coincident with previous report[41-45]. APC gene mutation was not correlated with age, tumor site, macroscopic type and histologic differentiation. This is identical to the previous demonstration that APC gene is involved very early in the carcinogenesis of sporadic CRC. There have been many reports about the APC gene mutation in sporadic adenoma. APC gene mutation occurred even in the adenoma < 0.3 cm. The mutation was more frequently found in villous and tubular villous adenoma than in tubular adenoma. Our results support this documentation. Two of 4 adenomas with APC gene mutation were villous adenoma and 2 were tubular villous adenoma. The same mutation in codon 1309 (GAA→TAA) was found simultaneously in ACF, adenoma and primary carcinoma. This mutation was also found in other 4 of 15 adenomas. The mutation at codon 1309 is also the hot spot in Chinese sporadic colon tumors. Exactly alike the other reports, the mutation at codon 1301, 1309 and 1547 lead to stop codon. It is reported that the mutations cause most commonly truncation of the protein. The truncated protein binds to the wild type protein, causing a negative effect and decreasing their function as a tumor suppressor[46-48]. Because APC gene is too large to be wholly sequenced and the mutations scatter throughout over the gene, it is difficult for us with so less cases to find more mutation characterization of this gene.

ACF differ with adenoma in morphological and molecular level on the following points: ① ACF is surrounded by normal crypts, ② cells in ACF are not so dysplastic as that in adenoma, ③ mitosis is rare, ④ ACF is much smaller than adenoma, ⑤ APC mutation is rare, ⑥ mutation in K-ras gene at codon 13 is detectable. The above fact suggests the hypothesis that ACF is a preneoplastic lesion. The concept "microadenoma" could be used to describe such morphological lesion[49]. Nucci and Kobayashi have suggested that ACF could be added to the order: "normal epithelium→ACF→adenoma→carcinoma"[50-52]. Many studies demonstrated that K-ras gene mutation is induced by the APC gene mutation. We found in our study in contrast that 6/34 ACF displayed K-ras gene mutation. Only 1 out of 6 showed APC gene mutation. The possible interpretations are: ① not all K-ras gene mutations are induced by APC gene mutation, ② adenoma formation could occur in the basis of APC and K-ras gene mutation, ③ ACF formation is related to K-ras gene mutation but not to APC gene, ④ there might be another path of CRC. In addition, 27 of 34 CRC in our study were not accompanied with adenoma, but the ACF is proved to possess the same molecular alteration as in the primary CRC. We speculate that except the classical path of CRC, there might be another path "normal epithelium→ACF→carcinoma", without the stage of adenoma. More detailed molecular approach to understanding the role of ACF in this path is necessary.

This subject is supported by the Fund for Returned Scientists and Scholars, [1999] 363, Chinese Ministry of Education.