AIM: To study the genetic susceptibility of HLA-DQA1 alleles to duodenal ulcer in Wuhan Hans. METHODS: Seventy patients with duodenal ulcer and fifty health y controls were examined for HLA-DQA1 genotypes. HLA-DQA1 typing was carried out by digesting the locus specific polymerase chain reaction amplified products with alleles specific restriction enzymes (PCR-RFLP), i.e. Apal I, Bsaj I, Hph I, Fok I, Mbo II and Mnl I.

CONCLUSION: DQA1*0301 is a susceptible gene for duodenal ulcer in Wuhan Hans, and there are immunogenetic differences in HLA-DQA1 locus between duodenal ulcer patients and healthy controls.

We examined 70 patients with duodenal ulcer (53 male, 17 female; mean age 38 years) and 50 healthy controls (38 male, 12 female; mean age 36 years) for HLA-DQA1 genotypes. All these subjects were from the Digestive Department, Second Hospital of Hubei Medical University. Duodenal ulcer was diagnos ed endoscopically. The ulcerogenic drugs, such as aspirin, indomethacin or corti costeroids were ruled out as the etiological factors in all of the duodenal ulcer patients. Patients with combined duodenal and gastric ulcers were excluded from this study. All patients and controls were Chinese Hans living in Wuhan.

PCR amplification A total amount of 100 μL reaction soluti on contained 1 μg DNA sample, 200 μmol/L dNTP and 50 pmol each of primers 1 and 2. The amplification of HLA-DQA1 exon 2 was carried out in one reaction system and PCR procedure was as follows: predenaturation at 94 °C for 5 min, addition of 2.5 μ Taq DNA polymerase, denaturation at 94 °C for 1 min, annealing at 62 °C for 2 min and extension at 72 °C for 2 min repeated 30 cycles and finally extension at 72 °C for 5 min to terminate the reaction. Because some alleles of HLA-DQA1 locus had a 3 bp deletion in the PCR-amplification the size of the amplified region of the DQA1 exon 2 was 239 bp or 242 bp as indicated (Figure 1). 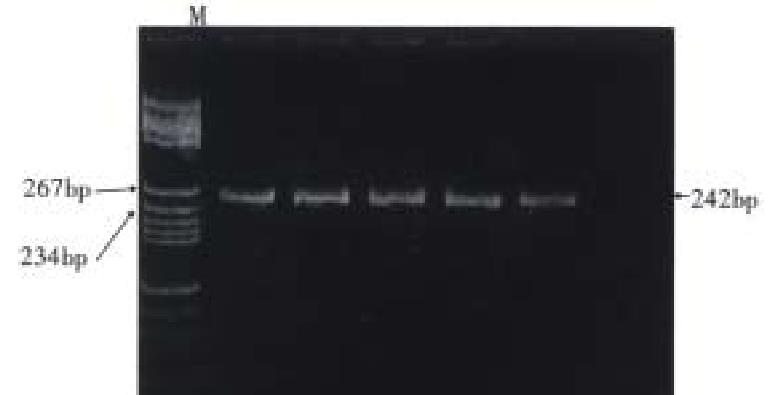 Digestion with restriction endonucleases After amplification, aliquots (7 μL) of the reaction mixture were digested with restriction endonucleases (Apal-I, Hph-I, Fok-I and Mbo-II: 5 units) at 37 °C for 1 h after addition of appropriate incubation buffer. When digested by Bsaj-I, the reaction mixture was incubated at 60 °C for 1 h.

Acrylamide gel electrophoresis Samples of the restriction enzym e-cleaved product amplified DNA were usually subjected to electrophoresis in 12% polyacrylamide gel in a horizontal minigel apparatus. They were expected to allow discrimination of seven alleles among the eight DQA1 alleles because the DQA1*0101 and DQA1*0102 alleles gave the same restriction map. However, when digested with Mnl-I enzyme, DQA1*0101 and DQA1*0102 can be discriminate d with 15% polyacrylamine gel. Cleavage or no cleavage of amplified fragments was detected by staining with ethidium bromide. Eight alleles of HLA-DQA1 locus were determined by this method[5]. The restriction map of the DQA1 alleles concerning these enzymes is shown in Figure 2. 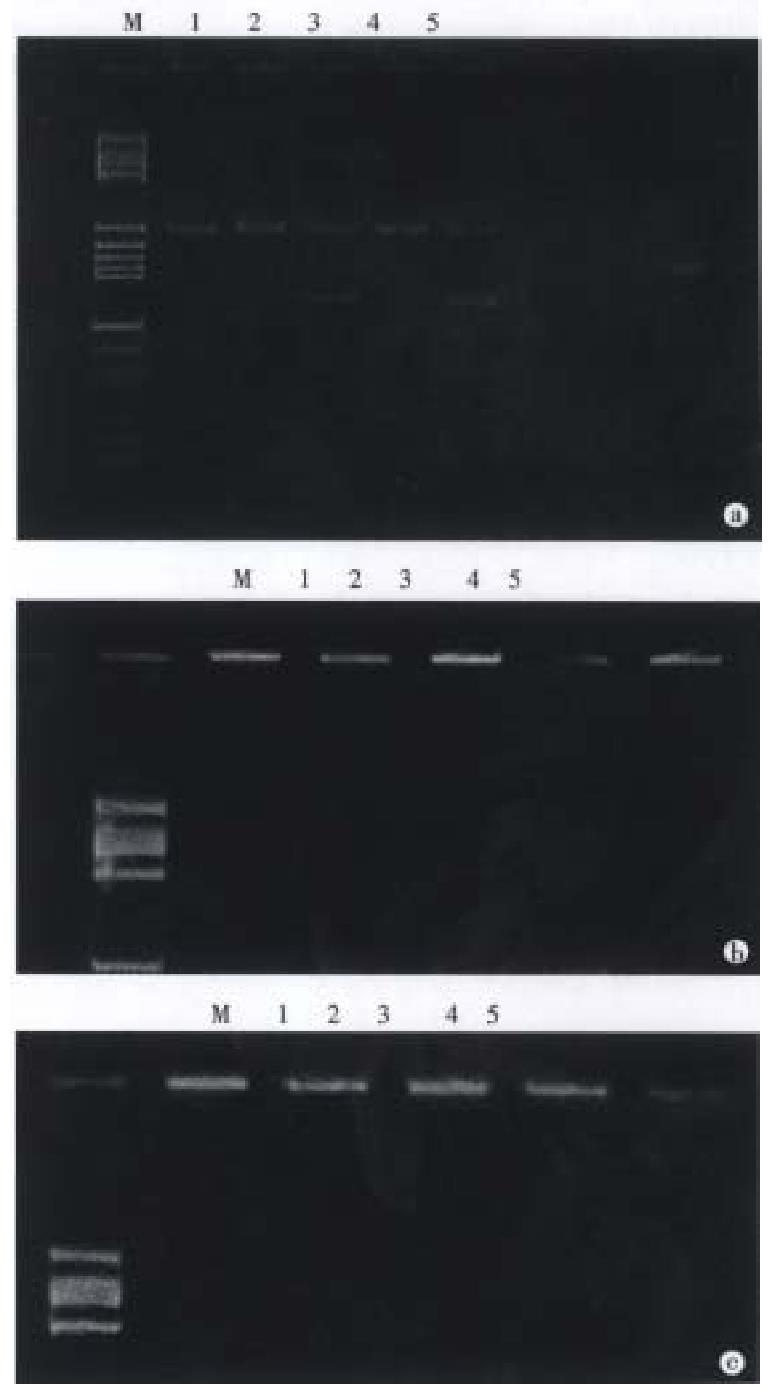 Various factors are accepted as the causes of duodenal ulcer disease. Not only inherited factor, but also immuno-dysfunction is associated with duodenal ulcer. Since the discovery of -Helicobacter pylori (H. pylori)-its infection has been widely accepted as the predominant cause of duodenal ulcer disease. T he pathogenic mechanisms that H. pylori causes human disease remain poorly understood. The human leukocyte antigen (HLA) DQA1 gene contributes to the host response against H. pylori. Many immune responses are controlled by genes of the major histocompatibility complex which encode HLA. Individuals with different HLA types may differ in susceptibility or resistance to particular infectious pathogens, and associations between HLA polymorphism and susceptibility or resistance to in fectious or autoimmune diseases have been identified[7,8]. The polymorphic HLA-DQA1 genes encode polypeptides which fold together to form a receptor that specifies T-lymphocyte recognition of self and foreign peptides[9]. Therefore we examined the HLA DQA1 locus in patients with duodenal ulcer in an attempt to investigate immunogenetic differences in the host.

Researches in the correlation between HLA and peptic ulcer disease were started sixty years ago. The finding showed that HLA-B5 antigen was associated with pepticulcer[10-13]. However, traditional serological method was used in some investigations, but it was obsolete and inaccurate. The individual genetic difference of HLA at the level of DNA was produced by encoded gene [14]. To understand the disease essence, correlation between peptic ulcer and HLA should be further studied with nucleotide typing technique.

DQA1 chain is not on isolated entity and is tightly linked with DR and DQB locus genes in the all genes region of the major histocompatibility complex. The result of the present study may provide a clue that HLAII genes are more strongly associated with duodenal ulcer than HLAI genes. The clue could not affirm which locus gene of HLAII Class genes is more important. Further genetic analysis of DRB1 and DQB1 genes, using various DNA markers to clarify the host genetic factors of susceptibility or resistance to duodenal ulcer, is required.