AIM To investigate the protective effects of polydatin (PD) against injury to primarily cultured rat hepatocytes induced by CCl4.

METHODS Rat hepatocytes were separated by methods of liver infusion in vivo and cultured medium (7.5 × 105 cells/mL). Two mL or 0.2 mL was added into 24-well or 96-well plates respectively. Twenty-four hours after cell preculture, PD at concentrations of 10-7 mol/L-10-4 mol/L was added into each plate. At the same time injury to hepatocytes was induced by adding 10 mmol/L-CCl4. Then, 0.1 mL or 1 mL-culture solution was removed from the 96-well or 24-well plates at 6 h, 12 h, 24 h and 48 h after CCl4 intox-ication respectively for the determination of GPT, GSH and MDA. At 48 h, the survivability of rat hepatocytes was assayed by the MTT colormetric method.

Polygonum cuspidatum Sieb. et Zucc. (Polygo-naceae) is a traditional Chinese herbal drug, with bitter taste and cold nature. It mainly acts upon the liver, gallbladder and lung meridians. It is well known that P. cuspidatum has various activities such as promoting blood circulation, relieving swelling and pain, eliminating phlegm, alleviating cough, clearing away heat, and removing dampness and toxin. The drug has been widely used for car-diovascular and liver diseases. Its active compounds mainly consist of free anthraquinones which include emodin, physcion and chrysophanol. Another im-portant compound is resveratrol[1].

Polydatin (PD), 3, 4’, 5-trihydroxystibene-3-β-mono-D-gluc oside, also named piceid, is the glyco-side of resveratrol[1]. Some previous studies demon-strated that PD could lower the level of blood lipid, inhibit the platelet aggregation, dilate blood ves-sels, protect cardiocytes, reduce cerebral ischemic damage and inhibit lipid peroxidation[2-6]. However, the effects of PD on hepatocytes and its mecha-nisms have not been reported up to date. In this paper we report the details of protective effects of polydatin against injury to primarily cultured rat hepatocytes induced by CCl4.

Rats were anesthetized with sodium pentobarbital (50 mg/kg, i.p.). Then the liver parenchymal cells of rat were isolated by the collagenase perfusion method following the procedure of Seglen and Ko-ji[8,9]. Simply, the portal vein of rat liver was exposed and cannulated with a teflon catheter. The liver was perfused with Ca2+ free solution containing NaCl 142, KCl 6.7, HEPES 10, NaOH 5.5 (mmol/L), pH 7.4, at 37, with a flow rate of 40 mL/min. Twelve minutes later, recirculation started with collagenase solution composed of NaCl 67, KCl 6-7, CaCl2·2H2O5, HEPES 100, NaOH 66, collagenase 0.2 g/L, pH 7.6. Isolated cells were cultured in RPMI 1640 containing 100 mL/L-fetal calf serum, 10 mmol/L-HEPES, 100 kU/L-penicillin and streptomycin, 10 mmol/L insulin and 10 mmol/L-dexamethasone. The content of hepato-cytes was adjusted to 7.5 × 108 cells/L with the above medium. Cultured medium 2 mL and 0.2 mL were added into 24-well and 96-well plates respectively. The cells were incubated for 4 h at 37 °C under 50 mL/L CO2 in air. Non-adherent hepatocytes were eliminated by replac ing the medium, and ad-herent hepatocytes continued to be incubated, and the medium was changed every 24 h.

After pre-culture for 24 h, the hepatocytes were exposed to fresh medium containing 10 mmol/L-CCl4 and various concentrations of PD. At 6, 12, 24 and 48 h after CCl4 intoxication, 0.1 mL and 1 mL cul-ture solution were removed from 96-well and 24-well plates respectively for determination.

The kits of GPT analysis, provided by the Shanghai Institute of Biological Products of Ministry of Health, were used to measure the activity of GPT in 0.1 mL- culture medium.

The survivability of rat hepatocytes was assayed by the MTT colormetric method[10]. At 48h after CCl4 challenge, 20 μL/well- MTT stock solution (5 g/L) was added into each well of 96-well plates. The cells were continuously incubated for another 4 h before 0.1 mL/well dimethyl sulfoxide was added to all wells and mixed thoroughly to dissolve the brown-black crystals. The plates were read on microplate reader, using a test wavelength of 570 nm with a reference wavelength of 655 nm.

The results were expressed as -x±s and significant difference was a ssessed by Student’s t test.

RESULTS
Effects of PD on GPT activity in culture medium

The concentration of GPT in culture medium signif-icantly increased after CCl4 challenge, and main-tained at a high level in 8 h (Table 1). Further-more, a progressively elevated trend existed with time-dependence. PD could significantly inhibit the level of GPT in accordance with the doses used. Es-pecially, PD 10 μmol/L had the strongest effects and the inhibiting rate was over 50%.

Effects of PD on GSH content in culture medium (Table 2).

The content of GSH in culture medium decreased obviously as compared with that in normal hepato-cytes after 6 h incubation with CCl4 (Table 2). On the other hand, PD of various concentrations could improve GSH in a dose-dependence manner, and 10 μmol/L PD showed a most signifi cant activity.

Effects of PD on MDA formation in rat hepato-cytes

CCl4 challenge obviously elevated the MDA forma-tion in rat hepatocytes, with a marked rise in time-dependence manner, whereas MDA formation of rat hepatocytes decreased significantly at various concentrations of PD as compared with that in CCl4 control group, and it reached minimum value at 10-5 mol/L and slightly elevated when PD concen-tration was up to 10-4-mol/L (Table 3). 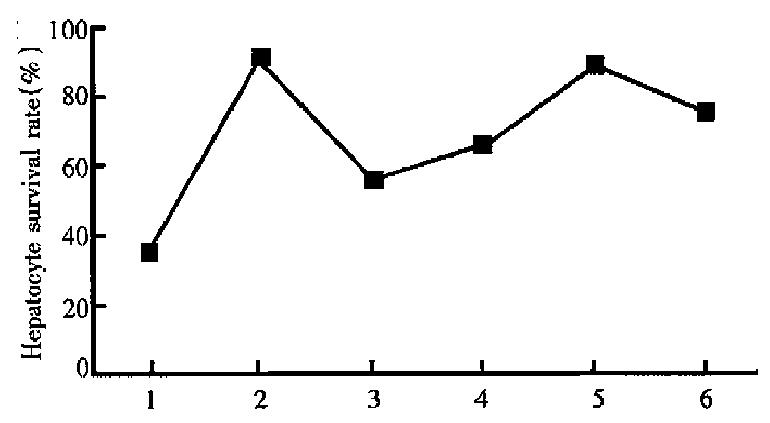 CCl4 is a well-known example of a chemical that produces free radical-mediated liver injury. It generates CCl4 by the activation of liver cytochrome P-450, initiating lipid peroxidation of bio-mem-branes[12]. In the presente xperiment, it was found that CCl4 induced both the increase of GPT in super-nat ant and the elevation of MDA in rat hepato-cytes. However, administration of 10-7 mol/ L - 10-4 mol/L PD could partly reduce GPT and MDA. Therefore, there may be two possible mechanisms contributing to the hepatoprotective actions of PD. One is that PD inhibits further production of lipid peroxidation in rat hepatocytes, and the other is that it inhibits the destructive action of lipid peroxi-dation on liver cells.

GSH is an important endogenous anti-oxidant substance. The decrease of GSH content may be due to increased GSH consumption as it participates in the detoxifica tion system for the metabolism of CCl4, and results in an enhanced susceptibility of hepatocytes to CCl4 toxicity[13]. Our results showed that CCl4 obviously decreased GSH content in the hepatocytes, but PD could partly reverse it. This suggested that the nature of PD protecting-SH com-pounds (such as GSH ) from CCl4 injury may be the third mechanism of its hepatoprotection.

It is interesting that PD of 10-5 mol/L was more ef-fective than that of 10-4 mol/L, at the same time, the hepatoprotective action of PD was in dose dependence at concentrations of 10-7 mol/ L-10-5 mol/ L. Its mechanisms of action need to be further studied.