Article-Type of This Article
Combined Traditional and Modern Medicine

RESULTS: Combined use of YHI and HHI-I could markedly increase the rabbits’ 5-d survival rate after AP (83.3% in the treatment group and 33.3% in control). The serum amylase value (x-±s) decreased to 1596.6 U/L ± 760.50 U/L in the 5th day from the high level (6320.83 U/L ± 2614.12 U/L) in the 1st day after AP in the treatment group, while in the control group the amylase activity in the 5th day was 2095.0 U/L ± 1081.87 U/L, being significantly different from that before AP (837.17 U/L ± 189.12 U/L). YHI and HHI-I also obviously improved the pancreatic microcirculation and lowered the serum interleukin-6 level, one of the indices of severe pancreatitis. Pathological examination indicated all the changes typical for AP in YHI and HHI-I treatment group were milder than those in the control.

CONCLUSION: YHI and HHI-I used in combination might have protective effect against acute pancreatitis in rabbits.

Autodigestiono fpancreaticenzymesin pancreatic tissues and pancreatic ischemia are two most important pathogenic factors in acute pancreatitis (AP). In order to lower the morbidity and mortality of AP, inhibition of pancreatic digestive enzymes and prevention and treatment of pancreatic ischemia are the two necessary therapies. Recently, many experimental researches and clinical trials are being addressed to these fields.Yuanhu (Rhizoma Corydalis) injection (YHI) is the most effective inhibitory Chinese medicine screened from the decoction used in our institute for AP. Huoxue Huayu Injection I (HHI-I) is one of best Huoxue Huayu (promoting blood circulation to remove blood stasis) decoctions. It has been demonstrated that YHI can inhibit the activity of typsin and elastase and HHI-I can improve the pancreatic blood flow and oxygen supply[1]. In this experiment, we have observed the protective effect of YHI and HHI-I against AP in rabbits.

The AP model in rabbit was produced according to Klar’s method with slight modefication[2]. Male white healthy rabbits weighing 2.5 kg ± 0.4 kg were used. After overnight fasting, the animals were anesthetized with intravenous 6% pentobarbital (20 mg/kg) and intramuscular ketamine (25 mg/kg). Under sterile condition, the abdoman was opened and biliary pancratic duct at duodenum wall was found and inserted with a polyethylene catheter. A mixture of 5% sodtaurocholate, trypsin (24 U/mL)and homologous blood (30 μL/mL), incubated at 37 °C for 60 min was infused at 0.8 mL/kg body weight into the duct under 5.3 kPa, at an interval of about 10 min.

Twelve rabbits were divided into treatment and control groups 6 each. During experiment, the abdomen was opened, the state of pancreatic microcirculation was determined and AP was then induced. Immediately, 30, 60, 90 and 120 min after the AP was induced, microcirculation was evaluated once more. The abdoman was then closed and the survival time and rate were observed. Before AP and 1 and 2 d after the operation blood samples were obtained from auricle vein to measure the serum amylase and interleukin-6 levels. Normal saline was infused intravenously in control animals immediately after AP and 1 and 2 d after that. The treatment group was administered with YHI and HHI-I simultaneously at l g/kg desolued in 10 mL normal saline. When the animals died, sample of pancreas was harvested for pathological examination.

Serum amylase activity increased obviously in the control group at the 1st and 3rd day. At the 5th day it began to decrease, but still remained markedly higher than before AP. In treatment group, higher levels of amylase activity could be seen at first day after AP. At the 3rd day, however, it decreased significantly and almost reached to the normal level at the end of experiment (Table 1).

Immediately after AP, the microcirculation of pancreatic tissue became obviously deteriorated. In treatment group pancreatic blood flow was improved somewhat at 30, 60, 90 and 120 min after AP was induced, but in the control group it was getting worse and worse (Figure 1 and Figure 2). 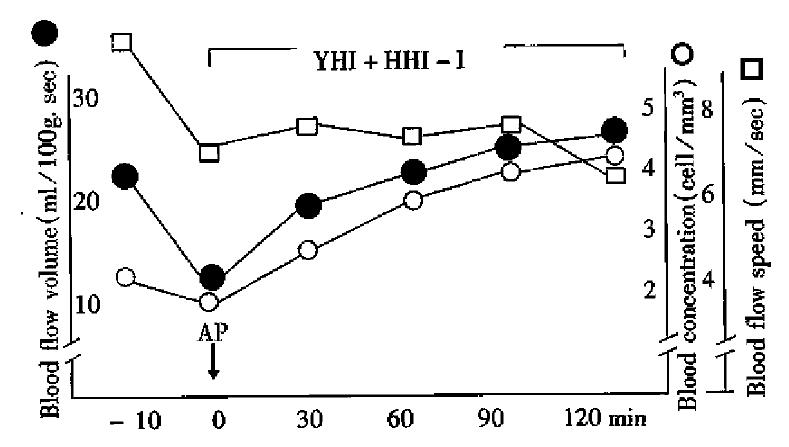 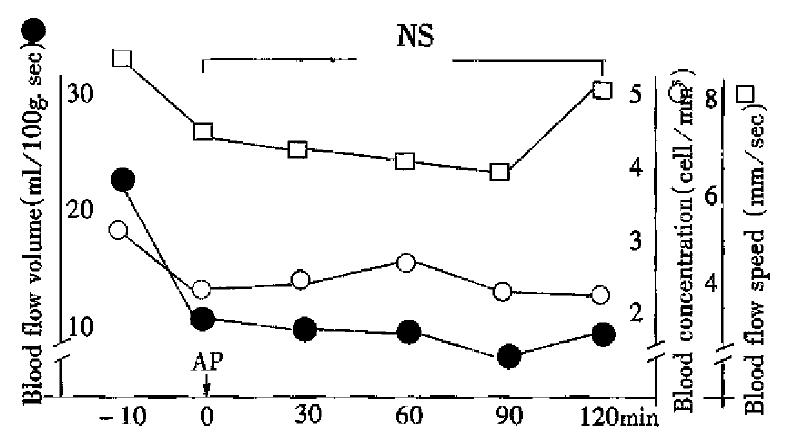 Most parts of pancreatic and fat tissue in control group had necrosis and large areas of hemorrhage. In the necrotic tissues there were many foci of PMN infiltrations and abscesses. The necrosis dimension and the number or size of hemarrhage in the treatment group were obviously lower than in the control. The extent of PMN leukocyte infiltration and the size or number of abscesses were also milder, with some more intact pancreatic bolules. Even though some lobules were dystroyed severely, the was still intact (Table 3).

Aprotinin was an antiprotease used firstly in clinical practice. However, the therapeutic effect for SAP was not satisfactory possibly because its molecular weight was too heavy to enter into acinar cells, and the half-life was short in blood circulation. Subsequently, some other antiproteases with low molecular weight were found such as Gabexate Mesilate (GM, Mr 417.5) and Camostate (FOY-305, Mr 494.5). Several experiment studies showed that GM was a very valuable medicine for prevention and treatment of AP, especially when it was before the disease was induced. The results of the first mult-center clinical research was also encouraging. A report of a case-control clinical trial indicated that GM (900 mg/d) could decrease the number of operations associasted with AP. Owing to the relative low dosage used, Büchler and his co-workers increased the dose of GM to 4000 mg/d in 223 patients with moderate to severe pancreatitis (average Ranson score at 3.7) for 7 d, and found there was no difference in the mortality, pancreatitis-associated operation, hospitalized days, complication score and some parameters of biochemical assays as compared with those in the control group. Their conclusion was that GM was not effective in prevention of complications and deeth[3]. According to the result of the recent retrospective reviews GM could obviously decrease the incidence of complications in operations. Being expensive in price could only be used in those patients at high risk to create a better cost-effect ratio[4].

Possessing wider enzyme-inhibitory spectrum, FOY-305 could markedly increase the survival rate in experimental SAP animals[4]. The beneficial effect of FOY-305 could be obtained by FOY-305 and its metabolites which could be absorbed from intestine into blood circulation; by stimulating the endogenetic secretion of secretin and CCK to increase the exocrine pancreas; and decreasing the intra-acinar vacuolization. Recently, it was demonstrated that oral administration of FOY-305 could also decrease the extent of pancreatic edema and vacuolization of acinar cells in AP rats induced by cerulein. FOY-305 could decrease the level of trypsin in pancreatic tissues as well. By means of above actions, FOY-305 might be beneficial to cerulein-induced AP rats[6]. To date no information was found on clinical application of FOY-305.

Antiprotease was not satisfactory for treating AP clinically made the researchers suspect the cerrectness of the concept of enzyme-inhibition in treatment AP. It was important to recognize that the patients could not be admitted to hospital 12 to 24 h after the occurrence of inflammation, during which the patients’ kinin and complement system were already activated, capillary endothelium cells injuried, some enzymes released from activated leukocytes. All these were related to the poor therapeutic effect of trypsin antagonist used after that period.

It was demonstrated that Chinese medicines, such as Banxia (Penellia ternata), Dahuang (Rheum palmatum), Huangqin (Scutellaria baicalensis), Hulian (Rhizoma picrorhizae) and Baishao (Radix paeoniae alba), that had enzyme inhibitory actions. The results from our institute indicated that among the 9 medicines investigeted, Yuanhu (Rhizoma corydalis) was the most potent inhibitor for trypsin activity.

Pancreatic ischemia was the etiologic and deteriorating factor for AP, and played an important role in necrosis of pancreas in the early period of AP[7,8]. Pancreatic ischemia imposed on pancreatic edema could induce necrotic AP. After AP was induced by ligation of pancreatic duct and overstimulation to exocrine pancreas, blockade of pancreatic artery for only 5 min could induce parenchymal necrosis of pancreas. Temporary ischemia of pancreas made the acinar cells more sensitive to the degradation effect of enzyme and more easy to form necrosis. Mithofer used bleeding method to induce blood hypotension (30 mmHg, 30 min) in rats, resulting in pancreatic ischemia, and found the serum amylaseincreased in 1 h after ischemia and rose at the 4th hour. Trypsinogen activative peptide (TAP) of pancreatic tissue was also increased at the first hour, and further increase occurred at 24 h. Pancreatic edema and necrosis were observed as well. In our opinion, besides deteriorated action, pancreatic ischemia itself, if serious, could also initiate AP[9]. On the other hand, changes of pancreatic blood circulation could be found in the course of AP. That reported that 5 min after AP was induced, segmental spasma of arteriole and venule of acinus could be observed, and there was blood stasis at 15 min. Using vital microscopy technique, Klar observed that perfusion of pancreatic capillaries of rabbit diminished gradually 30 min after AP and stopped completely at 3 h [2]. Klar also found that isovolemic hemodilution with dextran 60 could maintain pancreatic capillary perfusion, and the relative number of vacuolization in acinar cells and parenchymal edema were both obviously lower than in the control group. Clinicaly, Klar carried out a trial treatment in 13 patients with SAP (mean Ranson score 4.6). The time interval between appearance of symptoms of AP to the beginning of hemodilution was 38 (19-90) h. The hematocrit (HCT) decreased to 34% ± 6% at the first hour and 31% ± 4% at the second hour. The mean exchanging time was 45.70 min and the exchanging volume was 750 mL-170 mL. The ultimate results showed a mortality of only 7.7%. Therefore, we think that the isovolemic hemodilution had no harmful side-effect and could be used in further clinical trial[11].

In vitro screening test in our research indicated that YHI was the most potent inhibitor for pancreatic digestive enzymes among the nine screened Chinese herbs. Optimized selection experiment showed that HHI-I was the most beneficial herb for both intestinal and pancreatic blood flow and oxygen consumption. In this experiment satisfactory results were obtained in treatment of AP in rabbits with YHI and HHI-I in combination. These were related with their enzyme-inhibitory action and improvement of pancreatic blood circulation.

However, this is a preliminary experiment only, further investigation on toxity, side-effect, effective dosage, and pharmacodynamics etc. are needed.