AIM: To study the peripheral mechanism of the inhibitory effect of intra-third ventricular administration (icv) of histamine (HA) on gastric acid secretion in rats.

METHODS: Gastric acid was continuously washed with 37 °C saline by a perfusion pump in male adrenalectomized SD rats. Drugs were injected intravenously (iv) by a syringe pump and their effect on pentagastrin-induced (10 μg·kg·h, iv) gastric acid secretion was observed.

CONCLUSION: The inhibitory effect of centrally administrated HA on gastric acid secretion may be mediated by vagi, acetylcholine M receptor and somatostatin.

It has been reported by our laboratory that intra-third-ventricular administration (icv) of histamine (HA) or 2-pyridylethylamine (PEA), a H1-receptor agonist, inhibits gastric acid secretion induced by intravenous (iv) pentagastrin (G-5) in rats. The inhibitory effect of HA or PEA on gastric acid secretion was mediated in turn by corticotropin-releasing factor (CRF) and β-endorphin in central nervous system and abolished by subdiaphragmatic vagotomy (SV)[1-3]. The aim of the present study was designed to determine the peripheral mechanism of inhibitory effect of centrally administrated histamine on gastric acid secretion.

Male Sprague-Dawley (SD) rats weighing between 200 g-300 g were used. The animals were deprived of food for 24 h, but were allowed free access to water prior to anesthesia.

The rats were anesthetized with a single intraperitoneal injection of pentobarbital (50 mg/kg). Intra-third-ventricular implantation and acute gastric lumen perfusion were carried out as described previously by our laboratory[1]. Gastric perfusion samples were collected every 10 min and were titrated by 0.01 mol/L NaOH to neuter. Total acid output per 10 min was calculated. The anus temperature of rats was kept at 37 °C by electric light during the experiment. Sufficient pentobarbital was given subcutaneously before G-5 was injected.

In has been reported by our laboratory[2] that adrenal gland was associated with stimulating effect of icv PEA on gastric acid secretion in SV rats. To remove this effect, the following experiments were done in adrenalectomized rats. 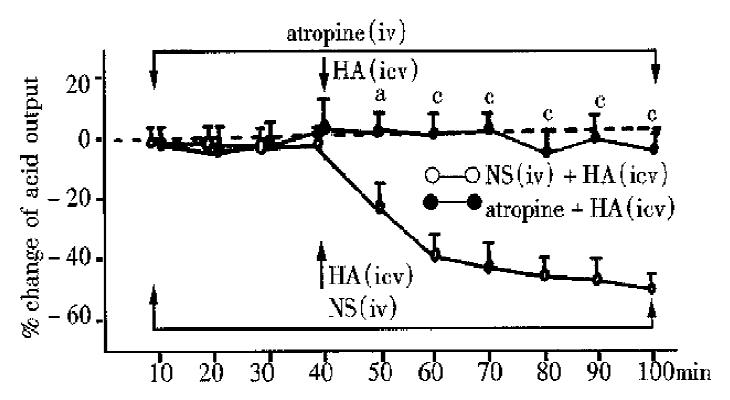 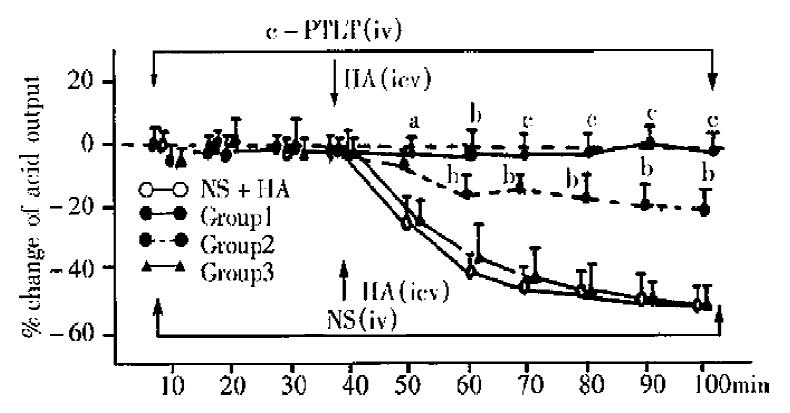 In group 3 (n = 8), the inhibitory effect of HA (icv, 1 μg/5 μL) on gastric acid secretion was not changed. Compared with the control group, P values were more than 0.05.

Project supported by the Doctoral Program Fund for Institutions of Higher Education. This subject was awarded the first prize of outstanding thesis by the Guangdong Association of Physiological Sciences.