AIM: To study the expression and significance of laminin in human colorectal carcinoma.

METHODS: Using the monoclonal antibody to laminin and streptavidin-peroxidase immunohistochemical method, the expression of laminin in 63 cases of human colorectal carcinoma tissues was determined.

CONCLUSION: Immunohistochemical staining for laminin could provide a very useful indexfor the determination of the differentiation degree of colorectal carcinoma.

Normal epithelial tissues secretes, assembles, and adhere to well-defined basement membranes. Loss of a well-defined basement membrane is one of the features of neoplastic proliferation for epithelial-derived tumors[1]. Laminin, a major glycoprotein of basement membrane which has been shown to regulate a variety of biological phenomena including cell attachment, growth, morphology and cell migration by specific high affinity receptors, plays an important role in the interaction of tumor cells with the basement membrane, the differentiation, invasion and metastasis of tumors[2,3]. Immunohistological studies, by using antibodies specific for laminin and other basement membrane components, such ast type-IV collagen, have revealed disruption or loss of basement membrane staining in a number of malignant tumors, including breast, pancreatic, bladder, prostatic and colorectal carcinomas[4]. In this study, basement membrane protein laminin was assessed by streptavidin-peroxidase immunohistochemical method to facilitate the understanding of the relationship between laminin expression in human colorectal carcinoma and the pathological features of tumor

Sixty-three cases of human colorectal carcinoma specimens were obtained from the Department of Pathology, China Medical University. Thirty-three were male and 30 were female with ages ranging from 26 to 72 years. The tissues were fixed in 10% nautral buffered formalin and embedded in paraffin wax. Five μm paraffin sections were cut and used for HE staining and immunohistochemistry.

Laminin expression was determined by using streptavidin-peroxidase (SP) immunohistochemical method with anti-laminin monoclonal antibody (SIGMA, 1:1000; SP kit ZYMED). Both negative and positive controls were set. The staining was scored according to both intensity and continuity of the basement membrane. they were scored as negative (-), fragment pattern (+), interrupted linear pattern (+ +), and continuous linear pattern (+ + +). Negative and fragment patterns were classified as discontinuity and the other two patterns as continuity. Statistical analyses were conducted by χ2 test. Results were considered significantly different when P value was less than 0.05.

Normal large intestinal mucosa adjacent to carcinoma exhibited an organized glandular epithelium overlying a well-defined continuous linear basement membrane that stained for laminin (+ + +), (Figure 1).Well and moderately differentiated colorectal carcinomas differed from normal colon in which periglandular basement membrane staining was thin and intermittently discontinuous (+ + to + + +), (Figure 2). Poorly differentiated tumors consisted of solid nonglandular islets of cells. Patches of laminin staining was scatered throughout the tumor. Nonpolarized cytoplasmic laminin staining without a surrounding basement membrane (- to +) (Figure 3) was found sometimes in the nests of cells in these tumors. 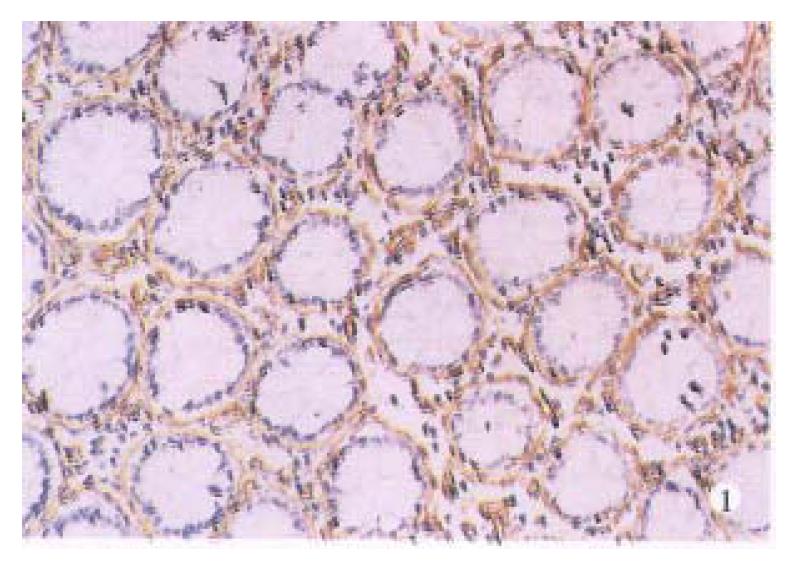 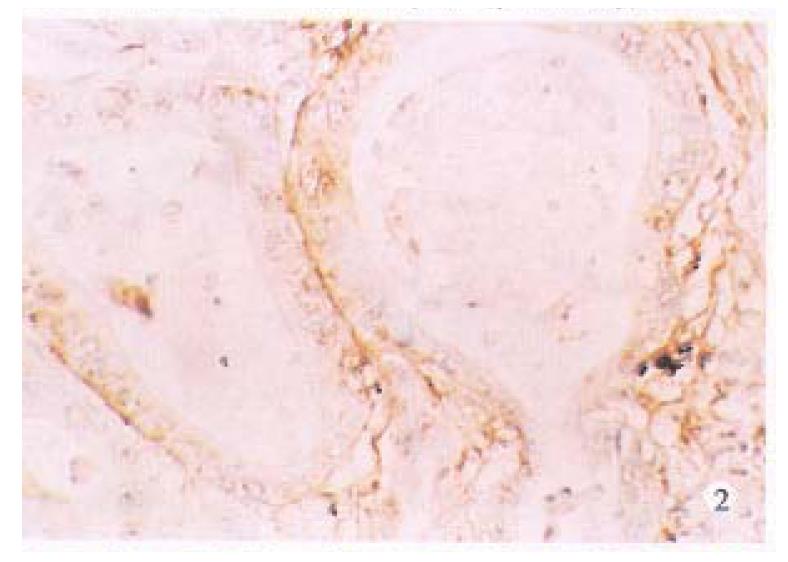 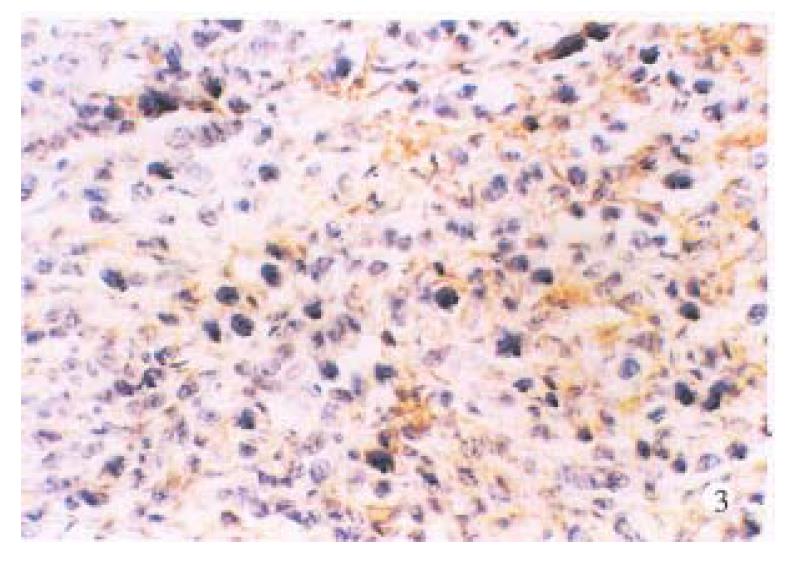 There is an evidence for a number of mechanisms explaining basement membrane discontinuity in malignant tumors. Daneker et al[7] reported that in poorly differentiated colon carcinoma cells, newly synthesized laminin was secreted more slowly than in well differentiated cells. Basement membrane degradation by tumor-derived proteinases may also be important. Proteinase specific for the basement membrane component type-IV collagen has been identified in invasive tumors. Increased amount of the degradative enzymes cathepsin B, urokinas-type plasmignogen activator and β-glucuronidase has been demonstrated in colorectal carcinomas[4,8-9].

Up to now, the genetic and biochemical factors that under the tumore differentiation and other biological properties are poorly understood. Studies aimed at definding these factors would not only contribute to an understanding of differentiation at molecular and cellular level but also would provide new reagents and criteria for a more precise determination of the degree of tumor differentiation, thus faciliate the understanding of the biological behaviors of tumors. The results of this study confirmed that immunohistochemical staining of laminin could provide a very useful index for the determination of the differentiation degree of human colorectal carcinoma.

Project supported by the National Natural Science Foundation of China, No. 3904005.