AIM: To investigate the morphological changes in the process of heteroserum induced rat liver fibrosis and the mechanism of fibrogenesis of this model.

METHODS: A model of heteroserum-induced rat liver fibrosis was established by intraperitoneal injection of porcine serum. In addition to the observation of the morphological changes of this model, the infiltration of eosinophils and mast cells were measured quantitatively and the deposition of IgG and complement C3 was detected by immunofluorescence.

RESULTS: The rat liver fibrosis was induced successfully at the end of the 8th week after the injection of heteroserum. Besides the increase of hepatic stellate cells (HSC) during the process of liver fibrosis, proliferation and activation of primary mesenchyma cells (PMCs) were also found. In the early stage, the infiltration of eosinophils and mast cells was significantly increased and the deposition of IgG and complement C3 was positive in the portal tracts and septa, while gradually reduced after the injection was stopped.

CONCLUSIONS: This model is suitable for the research on liver fibrogenesis; the pathogenesis of this model may be related with the allergen-induced late phasereaction (LPR) caused by the injection of heteroserum, and the HSCs and the PMCs are important sources of ECM-producing cells.

There are several kinds of animal model of liver fibrosis in the literature, among which CCl4-induced model initiated with marked damage of liver tissues was extensively investigated and applied. There have been a few reports about immune liver fibrosis model without severe injury of hepatocytes because of the complexity of its making and the higher mortality of the animals. In this paper, a kind of immune liver fibrosis model established by intraperitoneal injection of heteroserum was reported in this paper, and the morphological characteristics and the pathogenesis were studied.

The model was established according to the method o f Paronetto’s[1]. Forty Wistar femal erats weighing about 100 g and fed with common stuff and water were randomly divided into 5 groups. In each group, 5 rats were injected with 0.5 mL porcine serum intraperitoneally twice a week for 10 weeks, and 3 rats with sterile physiological saline in stead. Three groups of rats were killed at the end of the 3rd, 8th and 10th week, and the other two groups at the end of the 15th and 20th week respectively. The liver tissue was regularly fixed, embedded and sliced for light or electron microscopy, and serial paraffin sections were stained with H.E., von Gieson and toluidine blue. IgG and complement C3 were detectedby immunofluorescence in the frozen sections. Rabbit antibody against human C3 was purchased from Dako Co. Rabbit antibody against rat IgG and FITC labeled goat antibody against rabbit IgG were prepared in our department. Eosinophils and mast cells in the liver tissue were counted and statistically analyzed with rank-sum test.

During the whole period of the experiment no rats died and all the experimental rats advanced into liver fibrosis after injection of porcine serum for 8 weeks. Observed with the naked eye, the liver surface appeared normal until the end of the 8th week, and presented tiny particle-like changes, the tissue became hard afterwords, and the hardness increased progressively.

Microscopically, at the end of the 3rd week of the injection, one rat remained almost normal. The portal tracts enlarged mildly with extracellular matrix (ECM) and proliferated mesenchymal cells and small bile ducts without canal were visible in 4/5 rats although there existed the structure of the liver lobules. Most of the interstitial cells were enlarged and spindled in shape (Figure 1). The increased ECM and cells were also observed around the hepatic veins and central veins. In some areas, the early cellular septa consisting of the increased interstitial cells were found and inserted into the parenchyma. In one of the rats, the lobules were almost completely separated by the septa. At this stage, the liver cells had no obvious damage except the apoptosis of individual cells near the septa. Under the electron microscope, the sorts of mesenchymal cells in septa were different, some of which were typical fibroblasts, and some appeared as primitive mesenchymal cells (PMCs) with a high ratio of nucleus to plasm and a large elliptic nucleus containing 2.4 nucleolus and a few of cell organels (Figure 2). Hepatic stellate cells (HSCs) of perisinusoid close to the portal tracts or septa were elongated with less or none lipid droplets and increased and dilated endoplasmic reticula, which was often near the mesenchymal cells (Figure 3). 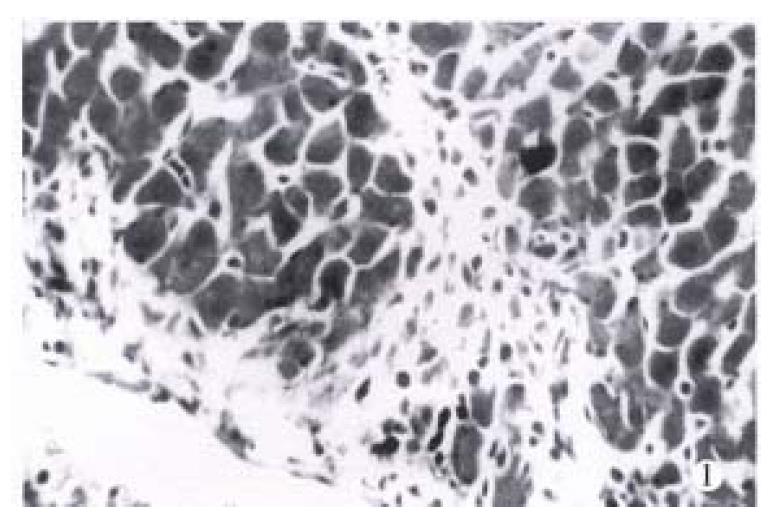 Figure 1 At the end of the 3rd week, the structure of liver lobules was defined well, the portal tracts were enlarged mildly with increased ECM and proliferated mesenchymal cells. The infiltration of eosinophils was visible in these areas. HE × 200 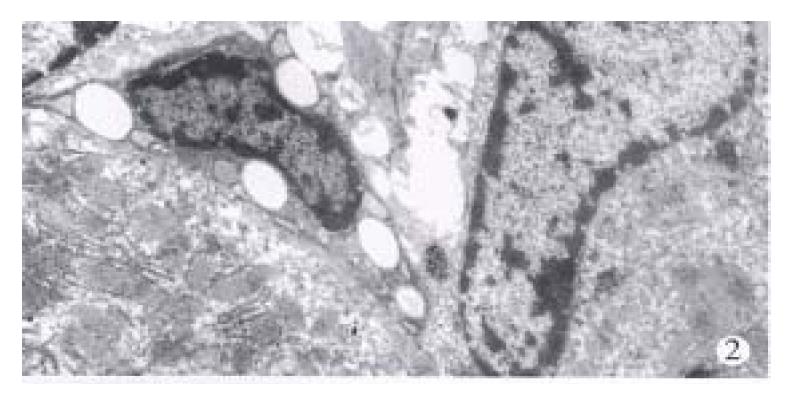 Figure 2 PMC with larger clliptic nucleus and HSC nearby at the end of the 3rd week. EM × 5000 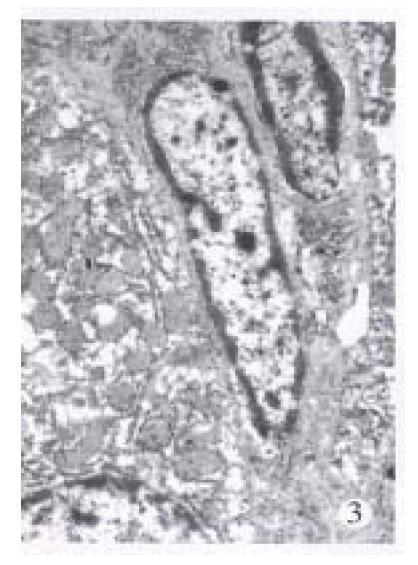 Figure 3 The activated HSC enlarged with organels and less lipid droplets at the end of the 3rd week. EM × 4000

At the end of the 8th week, the structure of liver lobules was undiseriminated in all of 5 experiment rats, and markedly enlarged portal tracts with connective tissues were distinctly exhibited in VG stain. The septa containing many mesenchymal cells and collagen fibrils (so-called cellular fibrious septa) were extended into parenchyma, connected with adjacent portal tracts or hepatic veins and separated the lobules. The number of mesenchymal cells increased apparently in the portal tracts and septa, and PMCs were relatively less in these areas. Hepatic cells were swollen with vacuoles in cytoplasm, and some of which trapped in septa. Elcotronmicroscopically, among the mesenchymal cells in or around the portal tracts or septa, PMCs were less in number while HSCs increased as compared with those at the end of the 3rd week. The transitional cells between PMCs and fibroblasts were also seen with increased and dilated endoplasmic reticula and slightly leaner nucleus with small wrinkled nuclear membrane (Figure 4). However, myocyte-like structure as macula densa or dense body was not seen in these mesenchymal cells. At the end of the 10th week, the amount of ECMs in portal tracts and septa increased obviously, but the number of mesenchymal cells decreased. As a result, the fibrous septamainly composed of ECMs were formed and revealed strong VG stain (Figure 5). The cells in the fibrous septa were fibroblasts and fibrocytes with leggy and deeply colored nucleus. At the end of the 15th week, i.e. 5 weeks after the serum injection, the liver structure was similar to that in the 10th week, but the number of mesenchymal cells declined progressively, and some of fibrous septa were thin or even diminished, and faded in VG stain. Under the EM, lipid droplets in HSCs increased again, although a large amount of bunched and intersected collagen in septa remained the same. In addition, some blood vessel walls thickened and became homogeneous in portal tracts and septa, but necrosis and infiltration of neutrophils were never discerned throughout the experiment. 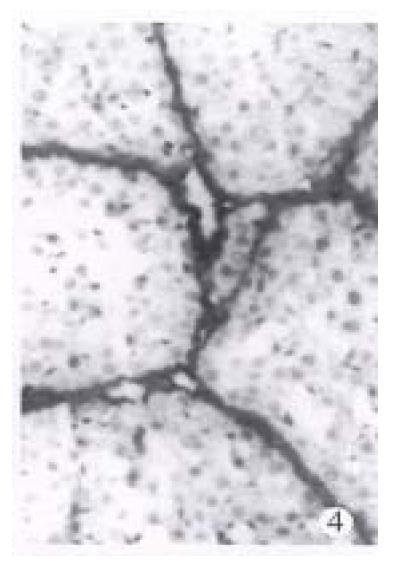 Figure 4 A large quantity of collagen fibrils around the PMC and the fibroblast. EM × 8000 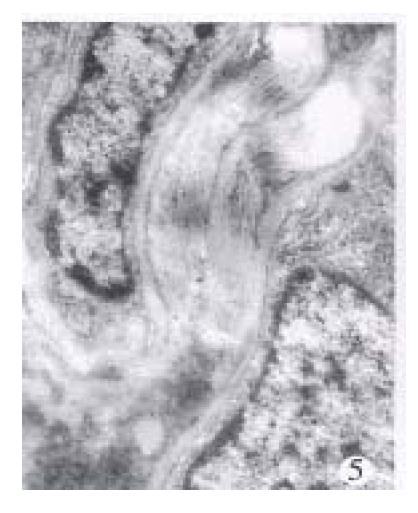 Figure 5 The fibrous septa inserted into and circled the pasenchyma at the end of the 10th week. VG × 40
Changes of eosinophils and mast cells

Detection of IgG and complement C3 in liver tissue 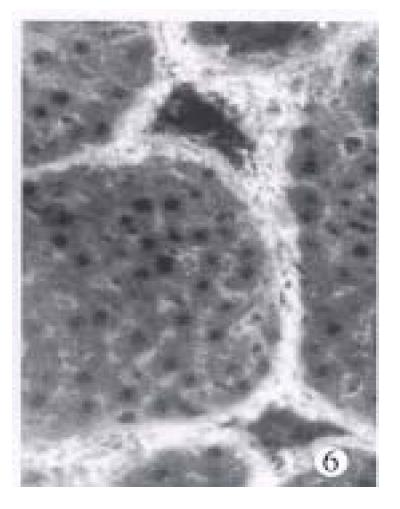 Figure 6 IgG was diffusedly deposited in the septa and portal tracts at the end of the 15th week. Immunofluoresence × 100
DISCUSSION

The different modes of immune rat liver fibrotic model induced with human or bovine albumin intravenously have been reported[2,3]. After a large dose of injection, focal necrosis and fibrosis were found, leading to allergic shock and a high mortality of about 50%. if a small dose was administered for 16 weeks, different degrees of fibrosis formed in 80% with a mortality of 20%-30%, although the mortality could be reduced when the mixture of albumin and prostaglandin E2 were added. Therefore, those models were not ideal for their complicated procedures, severe damage of liver tissue and high motality of animal. In our experiment, liver fibrosis formed in all the rats after continuous injection of poreine serum intraperitoneally for 8 weeks, and no rat died during the experiment. In addition, morphology of liver tissue was distinct without severe injury of hepatic cells, therefore, it famitates in situ study and is superior to the the CCl4-induced fibrosis model with severe distortion of liver structure. As a result, our model is more suitable for research on liver fibrogenesis with the advantages of less expenses, short duration and higher success rate and simplicity of pathological changes. Our model can reveal clearly the three stages in the process of the experiment: the cellular septa formation, cellular-fibrous septa and fibrous septa. As for the source of ECM-producing cells, it has been considered that HSCs are the most important cells. This was further confirmed in our model by the appearance of proliferation and activation of HSCs with abundant collagen fibrils around. At the same time, PMS, the immature mesen chymal cells mostly located in the portal tracts and early septa, were considered as another source of ECM-producing cells, increased and developed into fibroblasts. It is suggested that in porcine serum induced liver fibrosis model, ECM-producing cells may both originate from PMCs and HSCs, and synthesize and excrete ECM, sequentially accumulate and finally result in liver fibrosis. However, in this observation the myofibroblast, the another sort of ECM-related cells characterized with the myocyte-like structure such as macula densa or dense body in cytoplasm, was not found, which differed from the CCl4-induced model but was similar to that of Bhunchet[4].

Pathogenesis of heteroserum-induced immune liver fibrosis has not been clarified. Wang BN and Zhu QG and their coworkers[2,3] reported that IgG and complement C3 were detected in the liver tissue with obvious fall of C3 in serum, and they considered the mechanism of their model as type III allergic reaction due to the immune complex deposition. In our experiment, there was no typical type III allergic reactive pathological changes such as fibrinoid necrosis and infiltration of neutrophils in connective tissues or blood vessels although the deposition of IgG and C3 was seen in the portal tracts and septa and the walls of blood vessels were thickened. The role of immune complex in this model was still needed to be confirmed in the future. It was noticed that the appearance of the large number of eosinophils infiltrated in the portal tracts in the early stage was exactly the same as what happened in the late phase reaction (LPR) in type I allergic response. Eosinophils infiltration was considered to be intimately associated with chronic inflammations with fibrosis such as sclerotic mediastinitis, sclerotic cholangitis, idiopathic pulmonary fibrosis and so on[5]. It was reported that a number of eosinophils existed in bleomycin-induced pulmonary fibrosis and the high level of TGF-β1 was expressed in the tissue with in situ hybridization and immunohistochemical techniques[6]. Upregulation of expression of TGF-β1 was proved to be closely related with tissue repair and fibrosis[7,8]. All these phenomena suggest the hypothesis of this experimental liver fibrogenesis that LPR is initiated by heteroserum and mediated by mast cells to attract a number of eosinophils, which release active mediators such as TGF-β1 to activate and proliferate PMCs and HSCs, and to increase the synthesis of ECM and eventually result in excessive accumulation of ECM in the tissue.

We wish to thank Mr. Chao HK for animal feeding and Miss Zhuang L and Gu YH for their technical work. We are also grateful to Prof. Liang ZL for polishing the English language in this paper.