AIM: To determine the site of production and uptake of tumor necrotic factor alpha (TNFα), and evaluate the relationship between serum TNFα and plasma endotoxin (ET) in rats with acute hemor-rhagic necrotic pancreatitis (AHNP).

METHODS: Sprague Dawley rats were divided into AHNP group and control group (n = 12). AHNP model was induced by retrograde injection of 5% sodium taurocholate via pancreatic bile duct. The blood samples were obtained through portal vein 2 and 6 h after the operation.

CONCLUSION: Pancreas, spleen, liver, intestinal tract and lung are the main organs to produce TNFα, and liver is also an important site for TNFα uptake in the development of AHNP. Plasma endotoxin is not a trigger for TNFα release in rats with AHNP.

Recent studies have indicated that during the pathogenesis of acute hemorrhagic necrotic pancreatitis (AHNP), tumor necrotic factor alpha (TNFα) and endotoxemia play important roles in the progression of pancreatic inflammation and the damage of expancreatic vital organs£Û1£Ý. The purpose of this paper is to determine the production and uptake sites of TNFα, and the relationship between TNFα and plasma endotoxin (ET) in rats with AHNP, thus providing a direct theoretical basis for the treatment of AHNP by blocking the production of TNFα and clearing the secreted TNFα in plasma.

MATERIALS AND METHODS
Animals and grouping

SD rats were fasted for 24 h, and were anesthetized by intraperitoneal injection of sodium pantobarbital (30 mg/kg). Normal saline (0.9%) was injected into each rat through a PE-50 placed catheter in femoral vein. Sodium taurocholate (5% 1.5 mL/kg) were infused retrogradely to AHNP rats through pancreatic bile duct under a microsurgical procedure, after 5 min-10 min, pancreatic edema and dotted bleeding occurred. Isovolume of 0.9% normal solution was infused to the pancreatic bile duct of control rats using the same method, and no abnormality was noticed 2 and 6 h after the operation. Blood samples from hepatic vein, portal vein and femoral artery were harvested, at these time points, hemorrhage, necrosis of pancreas and hydremic ascites (5 mL-10 mL) were found in AHNP-rats, while no abnomality was seen in the control rats.

TNFα in portal vein, hepatic vein and femoral artery were determined with ELISA (provided by the Department of Immunology, the Third Military Medical University). ET in portal vein was assayed by a quantitative azostromatic coloration limulus test (kit provided by the Shanghai Medical Analysis Institute). 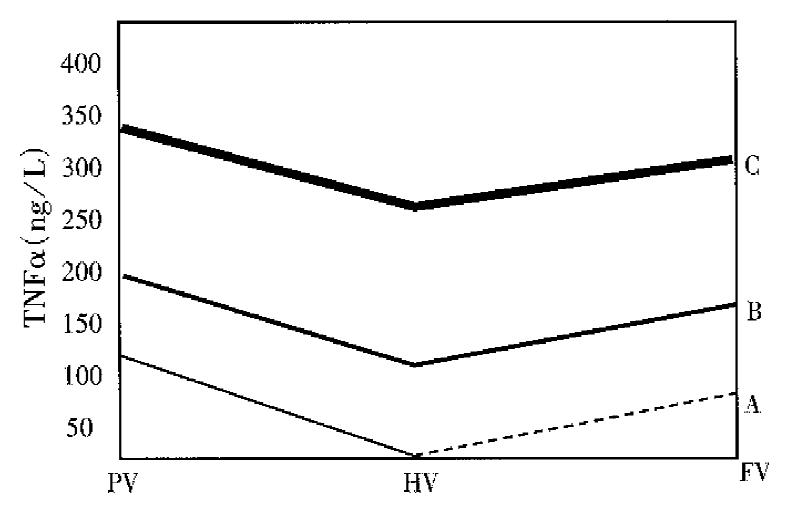 TNFα is an important inflammatory mediator during the development of AHNP. It can damage the pancreas and ex-pancreatic vital organ through the following mechanism: ① Enhancing the adhesion of PMN to endothelium. Recent research shows that there are some adhesive molecules or receptors, such as ICAM-1, ELAM-1 and VCAM-1 on the surface endothelia. TNFα can stimulate the expression of receptors for adhesive molecules on the surface of endothelium, leading to the adhesion of unstimulated PMN to endothelia and the migration of the PMN to inflammatory loci through vascular barrier. The interaction of PMN with target tissue cells and the releasing of oxygen free radicals (OFR) and neutral proteinase could cause the damage of adjacent tissues. ② The cytotoxic effect of TNFα. TNFα can bind with the specific receptors on the cellular membrane and facilitate the production of OFR, which damages the cell membrane and DNA, and cleaves DNA into fragments by endonuclease, leading to the death of cells. ③ TNFα can activate the inflammatory cells, stimulate the release of PMN from bone marrow, and promote the degranulation, the production of OFR and the releasing of lyso-some enzyme, alkali proteinase, etc. from eosinocytes. The persistent increase of plasma TNFα may promote the endocytosis, degranulation and the releasing of OFR and leukocyte enzymes (lysosome enzyme, plastic enzyme, etc.), resulting in the continuous hemorrhage, necrosis of pancreas and the development of MOF.

TNFα is a soluble polypeptide with an MW of 17 Ku, under the condition of severe infection, macrophagocytes, T cells and NK cells would produce TNFα due to the action of Gram negative bacteria and lipopolysaccharide. It is believed that at early stage of AHNP, the production of TNFα is not associated with ET[4]. Our results showed that plasma TNFα level elevated significantly when there was no increase of ET level in portal vein, indicating that ET was not the primary factor for the production of TNFα in AHNP rats, but TNFα level elevated much more significantly with the increase of ET. Recent studies also showed that, in late-stage AHNP, ET was contributed to the substantially in-creased production of TNFα. The synergetic effect of TNFα and ET is an important cause of high morbidity and mortality of AHNP. Therefore, control of infection, inhibition of the TNFα production, and removal of secreted TNFα are of great importance for the treatment of AHNP.