AIM: To study the relationship between the point mutation of ras oncogenes and the prognosis of patients with gastric cancer.

METHODS: The point mutations at codon 12 and 61 of c-Ha-ras, at codon 12 and 13 of K-ras, and at codon 12 of N-ras were studied with PCR-RFLP in 88 formalin fixed and paraffin embedded specimens of gastric cancer.

CONCLUSION: The findings suggest that the determination of point mutations of ras oncogenes can be used to determine the prognosis of patients with gastric cancer.

Eighty-eight specimens of gastric cancer were obtained during surgery in our hospital during the period from 1986 to 1991. All the specimens were fixed with 10% formalin and embedded in paraffin. Normal control tissue was collected from uninvolved gastric mucosa in all the patients. A 5 μm thick section was made, HE stained and examined under an optical microscope. Five similar sections were made from every specimen for DNA extraction.

For the extraction of DNA, 5 sections from each lesion were put into Eppendorf tubes and the paraffin was removed with xylene. After the tissue of the specimen was hydrolyzed and digested with proteinase K, the DNA content was extracted with the phenol chloroform method[4]. The samples of the purified DNA were diluted with TE buffer solution and their absorption value was determined on an ultraviolet ray spectrometer at the wavelength of 260 and 280 nm. The concentration and purity of nucleic acid were calculated.

The primers for the polymerase chain reactions (PCR) were synthesized by the Center of Science of Human Life of the Beijing University. The primer sets for ras mutation analysis were as follows:

PCR-RFLP was performed with the procedures as follows: DNA from 1 μg of tissue was dissolved in 50 μL PCR buffer solution containing 10 mmol/L Tris HCl, 50 mmol/ L KCl, 1.5 mmol/L MgCl2, 0.2 mmol/L dATP, dGTP, dCTP and dTTP, 25 pmol/L primer and 1.3 units Taq DNA polymerase. The cycle of denaturation at 95 °C for 70 s, renaturation at 57 °C for 70 s and extension at 72 °C for 70 s was repeated for 35 times, with the last elongation step lengthened to 10 min. 10 μL of the PCR product was cleaved with the corresponding endonuclease (purchased from the BRL Company of United States), underwent 8% polyacrylamide gel electrophoresis and was stained with ethidium bromide. Eventually the product was observed under ultraviolet light and photographed.

All 88 cases were followed up and the longest follow up lasted 13 years in order that the outcome of each case was obtained. 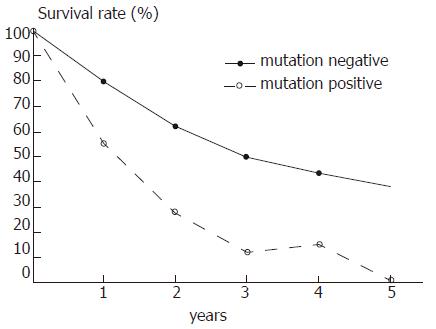 Survival analysis revealed a strong association between ras gene mutations of the tumor and patient survival time after surgery (Figure 1). The 5 year survival rate in the 72 cases without PM was 34.7% (25 cases) and compared with those with PM (0/16) the difference was significant (P < 0.01).

This study shows that the activation of ras oncogenes is the molecular basis of the development of certain cancers. PM is one of the important patterns of ras gene activation. Therefore, the detection of PM becomes one of the hot topics in cancer research.

PCR-RFLP, a technique developed in recent years, greatly simplifies the procedures to detect PM[6]. It can be used to detect the PM in the DNA extracted from fresh specimens of gastric cancer as well as in the DNA from paraffin embedded specimens. The simplified technique determining PM makes it possible to determine the prognosis for patients with gastric cancer.

PM at the codons 12, 13 and 61 of ras oncogenes can enable the cells to possess the capacity of transformation[7]. However, points for the restriction endonuclease to cleave at the codons 12 and 13 for K-ras and codon 12 of N-ras and PCR-RFLP can not be performed. The authors, according to the 3’ end region of the primers, introduced a mispaired base not affecting the amplification of PCR[5]. After the introduction of a mispaired base, a point to cleave is constituted for Bst N1. Thus, it is possible to study the PM at codon 12 and 13 of K-ras and codon 12 of N-ras.

It was also found that the PM of ras genes was related to some biological factors of gastric cancer. Different types of cancers and their size play an insignificant role in the PM rate of ras oncogenes while those cases with serosal invasion and lymph node metastasis showed a far higher PM rate than those without them.

The cases of gastric cancer in clinical stage III and IV showed a significantly higher PM rate than those in the clinical stage I and II.This finding is consistent with the result reported by the authors who obtained it through the study on the molecular mechanism of cancer infiltration and metastasis[7,11], which indicates the poor prognosis of the patients. Our results showed that the 5 year survival rate of patients without PM of ras genes was far higher than those with PM. Thus the determination of the PM of ras genes may be helpful for the prognosis of patients with gastric cancer and for the prescription of an efficient therapeutic plan for them.

The concept that cancer is a disease of genes has been widely accepted. Our study enables us to further understand the role played by the PM of genes in the development of certain cancers. On the basis of the data of our study that most cases of gastric cancer did not show any evidence of PM of ras oncogenes, it seems obvious that PM of ras oncogenes is not the only factor to induce gastric cancer and there must be some other factors which need to be further investigated and explored.