Gastrointestinal stromal tumors (GISTs) are the most common mesenchymal tumors of the gastrointestinal tract. As most of them harbor a KIT mutation (75%), selective kinase inhibitors are the therapeutic option and show a sustained objective response among patients with metastatic or unresectable GISTs. A well-known higher risk of neoplasm has been described among renal transplant recipients (RTRs). Nevertheless, only few cases of GIST onset among transplant patients have been reported in the literature.

Here, we describe 2 cases of gastric GIST occurring during the follow-up of RTRs. We also review the existing literature concerning GIST occurrence in transplant patients. In total and in association with our 2 cases, 16 patients have been reported. The median age was 59.5 years and 69% were male. With a median tumor size of 45 mm, no patient displayed metastatic dissemination at diagnosis. Time from transplantation to diagnosis was highly variable between 5 mo and 21 years. Histopathological data mostly revealed high risk of progression (43%). Death increased to 29% during follow-up. Surgical treatment was systematically performed when the tumor was operable (94%). The use of adjuvant therapy was uncommon (19%).

Core Tip: Although a well-known higher risk of neoplasm has been described among renal transplant recipients (RTRs), few cases of gastrointestinal stromal tumors (GISTs) have been reported. We describe 2 cases of gastric GIST among RTRs and provide a review of the literature. We report 16 patients with a median age of 59.5 years, and 69% were male. No patient displayed metastasis at diagnosis. Time from transplantation to diagnosis varied between 5 mo and 21 years. Histopathology revealed high risk of progression (43%). Death increased to 29%. Surgical treatment was commonly performed (94%). The use of adjuvant therapy was uncommon (19%).

Gastrointestinal stromal tumors (GISTs) are the most common mesenchymal tumors of the gastrointestinal (GI) tract[1]. GISTs arise from interstitial cells of Cajal (ICC), which are specialized mesenchymal cells located within the muscle of the GI tract. ICC play a critical role in regulating smooth muscle function and GI tract motility[2]. GISTs are mainly located in the stomach (55%) or the small bowel (30%). About 10% to 47% of patients have metastatic disease at diagnosis[3-5]. About 95% of GISTs display positive staining for the receptor tyrosine kinase KIT (or CD117), 75% of these tumors harbor a KIT gene mutation and 10% a platelet-derived growth factor receptor A (PDGFRA) gene mutation[6]. Among KIT-negative GISTs, immunohistochemical expression of discovered on GIST-1 (DOG-1) was found in 76% of the cases[7]. Consequently, selective tyrosine kinase inhibitors targeting KIT receptor have been used. The first one, imatinib mesylate (Gleevec®; Novartis, Basel, Switzerland), has shown a sustained objective response in a phase III trial among patients with metastatic or unresectable GISTs in immunocompetent patients[8].

We report 2 cases of GIST occurring in RTRs and provide a review of the existing literature concerning GIST occurrence in transplant patients.

Case 1: A 60-year-old Caucasian man without any symptoms.

Case 2: The upper GI hemorrhage led to gastric endoscopy, which revealed a spherical gastric tumor in the fundus.

Case 1: He had end-stage renal disease with a kidney biopsy compatible with nephronophthisis despite negative screening for mutation in hepatocyte nuclear factor 1 beta (HNF1B) gene. Hemodialysis was initiated in 2016. In October 2019, he received a kidney transplant from a deceased donor. The initial immunosuppressive therapy combined basiliximab, steroids, tacrolimus, and everolimus. Renal function at hospital discharge was 94 µmol/L, (normal range 53 µmol/L to 97 µmol/L). Initial maintenance immunosuppressive therapy associated steroids, tacrolimus, and everolimus. Due to relapsing lymphocele, everolimus was switched to mycophenolate mofetil (MMF). Moreover, a pre-existing mild cytolysis and cholestasis worsened after transplantation leading to the discontinuation of cotrimoxazole and MMF, which were replaced by atovaquone and belatacept (NULOJIX®; Bristol-Myers Squibb, New York, NY, United States), respectively.

Case 1: His other past medical history consisted in nonalcoholic steatohepatitis, Hashimoto’s thyroiditis, and hypertension.

Case 2: The patient had no significant personal or family history.

Case 2: Physical examination was unremarkable except for hematemesis.

Case 1: The patient had mild cytolysis and cholestasis without any other biological abnormality.

Case 2: No abnormal blood test was noticed on admission. 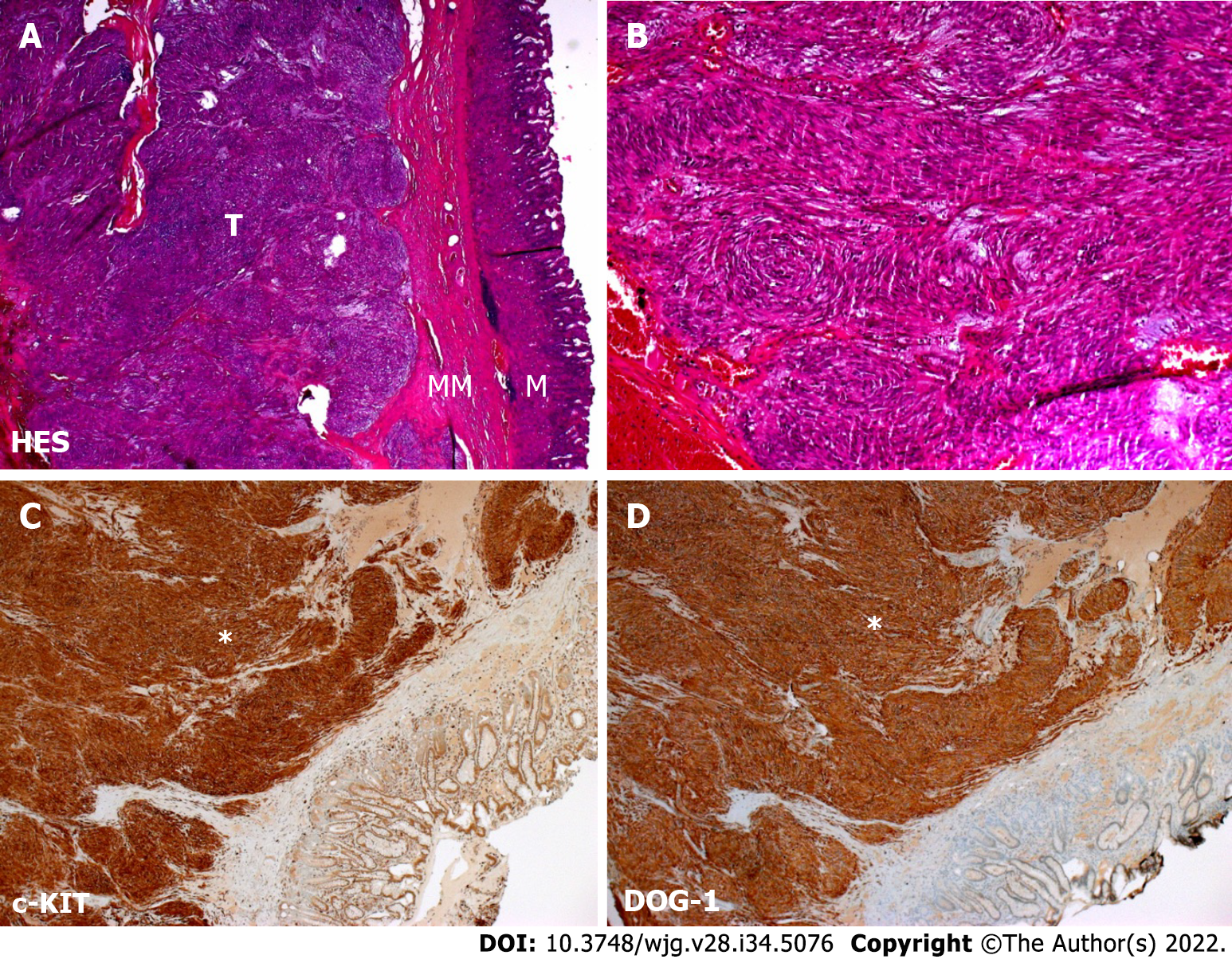 Case 2: The gastric endoscopy revealed a spherical gastric tumor in the fundus with a typical macroscopic aspect of GIST.

Course of illness in the hospital

Case 1: No complication associated with the GIST of its treatment was noticed.

Case 2: The patient was rapidly discharged after partial gastrectomy without complication.

Histopathology revealed a 27 mm stromal tumor strongly positive for KIT and moderately positive for DOG-1 with a mitotic count of 2 mitosis for 5 mm2. The tumor harbored an exon 11 (p. Val559Ala c.1676T>C) KIT mutation[23].

Regarding the very low risk of progression, no adjuvant therapy was initiated.

No adjuvant treatment was initiated at the time of diagnosis.

The patient remains in remission at the 1-year follow-up.

GISTs represent an uncommon malignant complication of immunosuppression state in solid organ transplantation. We describe 2 cases of typical GIST occurring early in the course of kidney transplantation. The first patient developed an isolated gastric GIST 5 mo after transplantation and the second 4 years after. Both were nonmetastatic at diagnosis although the second patient developed multiple hepatic metastasis 2 years after complete tumor resection. Of note, the mutation of PDGFRA D842V in the second case was associated with resistance to imatinib mesylate.

We looked for previously reported cases of GIST in the literature during the course of transplantation. We searched PubMed and Web of Science databases using the following Medical Subject Headings words: “Gastrointestinal stromal tumors” AND “Kidney transplantation” or “Gastrointestinal stromal tumors” AND “Transplantation.” Using these terms, we found 8 and 31 articles, respectively. Only 12 articles were analyzed. From 2007 to 2020, 14 cases of GIST have been reported in transplant recipients[11-22]. We excluded reports of GIST occurring among nontransplant or bone marrow transplant patients. We also excluded article types different than case reports or case series.

Table 1 summarizes the main features of these patients including the 2 cases described in the present manuscript. Tables 2 and 3 give details on the 14 cases reported. In our literature review, the typical patient profile was a male patient with a median age of 59.5-years-old, who developed large nonmetastatic gastric tumors (median size, 45 mm). The delay between transplantation and diagnosis was highly variable, ranging between 5 mo and 21 years. Histopathological data mostly revealed high risk of progression (42.8%) and death occurred in 29% of the cases during follow-up. Surgical treatment was systematically performed if the tumor features were suitable (94%). The use of adjuvant therapy was uncommon (19%).

Several prognostic classifications have been used to evaluate the risk of recurrence of GIST after surgery. In 2002, Fletcher et al[26] claimed size of the tumor and mitotic count, Miettinen and Lasota[27] in 2006 added tumor location and Joensuu et al[28] in 2012 adjoined rupture of the tumoral capsule and male gender. Heinrich et al[29] demonstrated that PDGFRA and c-KIT were mutually exclusive proto-oncogenic mutations with similar biologicals consequences, even if associated with different prognostics. Molecular predictors of response to imatinib have been widely studied. Underlying KIT or PDGFRA mutations are the strongest predictors of imatinib sensitivity[30]. Mutations directly located in the PDGFRA binding site of imatinib or inducing variations in tridimensional conformation of the tyrosine kinase receptor and subsequently hiding the binding site, may explain inefficacy of therapy. For instance, KIT exon 9 mutation is less sensitive to imatinib and PDFGRA exon 18 D842V mutations is associated with imatinib resistance. Nevertheless, these mutations have been correlated with opposite courses of the disease, indolent for PDFGRA exon 18 D842V mutation but aggressive for KIT exon 9 mutation[31]. These data should highlight the importance of molecular biomarkers to evaluate prognosis of GIST or EGIST at diagnosis.

Guidelines for the diagnosis, treatment, and follow-up of GIST have recently been published[32]. Management of local or locoregional disease should always aim for complete resection whenever possible. Otherwise, neoadjuvant treatment with imatinib for 6 to 12 mo should be used in case of sensitive mutation with an overall response rate of 50%[30]. Moreover, high-risk patients, as previously described, should receive adjuvant imatinib for a duration of 3 years[33]. Imatinib remains the first-line therapy for metastatic GIST. Several other targeted therapies such as sunitinib or regorafenib have emerged as second- or third-line treatment, and more recently avapritinib and ripretinib. Several biomarkers, such as KIT or PDGFRA mutations, are used as predictive factors for tumoral response to refine therapeutic strategies[32]. Data are missing concerning the level of tyrosine kinase inhibitors’ efficacy in transplanted patients.

Data about the management of immunosuppressive therapy after the diagnosis of GIST are scarce. As both imatinib mesylate and cyclosporin are extensively metabolized by cytochrome P450 3A4, interaction occurrence has been documented[12]. Reduction in the dosage of cyclosporin should be performed if this treatment is maintained. Mammalian target of rapamycin inhibitors (mTORis) have shown antiproliferative properties among transplant patients. Schöffski et al[34] highlighted the potential efficacy of association of everolimus and imatinib in imatinib-resistant GIST in a phase II trial. Cheung et al[14] reported a case of complete tumoral response with sirolimus in a transplant patient with imatinib-resistant GIST. Among the patients described in Tables 1 and 2, mTORis have been initiated or switched in 4 of them. Three of them were alive and relapse-free at last follow-up and the last patient died from pneumonia 2 years after GIST diagnosis.

This study had several limitations. First, the retrospective analysis of GIST cases impairs the reliability of the data. Very few cases of GIST occurring after solid organ transplantation have been described in the last 15 years reducing the significance of this literature review. Moreover, it was unclear if GIST was a de novo feature in our first patient because of the short delay (5 mo) between transplantation and tumor discovery. Unfortunately, the latest available CT scan was performed 7 years before the transplantation. However, some previous cases reported GIST onset within the 1st year following transplantation[14,18-22].