We report a case of GB neuroendocrine carcinoma (GB-NEC) in a 65-year-old man, who presented with flushing for 2 mo. Pathological specimens of the flushed skin revealed that mucin was deposited between the collagen bundles in the dermis. Computed tomography and magnetic resonance imaging indicated neoplasm in the GB with liver invasion and enlarged lymph nodes in the portacaval space. High fluorodeoxyglucose uptake was detected in lymph nodes in the portacaval space, but distant metastasis was not seen by positron emission tomography. Ultrasound-guided needle biopsy of the GB neoplasm was suggestive of high-grade NEC. Because of the functional characteristics of poorly differentiated NEC, en bloc cholecystectomy, resection of hepatic segments IVb and V, pancreaticoduodenectomy, and regional lymphadenectomy were performed. A diagnosis of poorly differentiated NEC was made by pathological findings and immunohistochemical staining data. Ki-67 index was > 80%. The patient refused adjuvant therapy and passed away in the 7th month.

Neuroendocrine neoplasms (NENs) refer to a family of neoplasms originating from neuroendocrine cells throughout the body, mostly originating in the gastrointestinal tract, pancreas, and lungs[1,2]. Neuroendocrine carcinoma (NEC) always refers to high-grade neoplasms with poor differentiation. NENs are traditionally divided into functional and nonfunctional neoplasms. Functional NENs produce peptide hormones that cause symptoms, while nonfunctional NENs are clinically silent until neoplasm is large, metastatic disease or bleeding occurs. Primary gallbladder (GB)-NENs are infrequent and make up < 1% of all NENs[1,3]. Among 875 GB carcinomas diagnosed by ultrasound-guided fine needle aspiration cytology, only 20 were GB-NENs[4]. In addition, among GB-NENs, carcinoid syndrome caused by functional neoplasm is exceedingly rare (< 1%)[5,6].

A 65-year-old man was admitted to our hospital with a history of flushing for 2 mo. The patient had no symptoms of abdominal pain, diarrhea, or jaundice.

The patient denied a history of hypertension, diabetes, and other relevant illness.

His father had esophageal cancer.

The physical examination was normal except for the skin. The skin over the face, neck, upper chest, and limbs was flushed and scaly (Figure 1A and B). 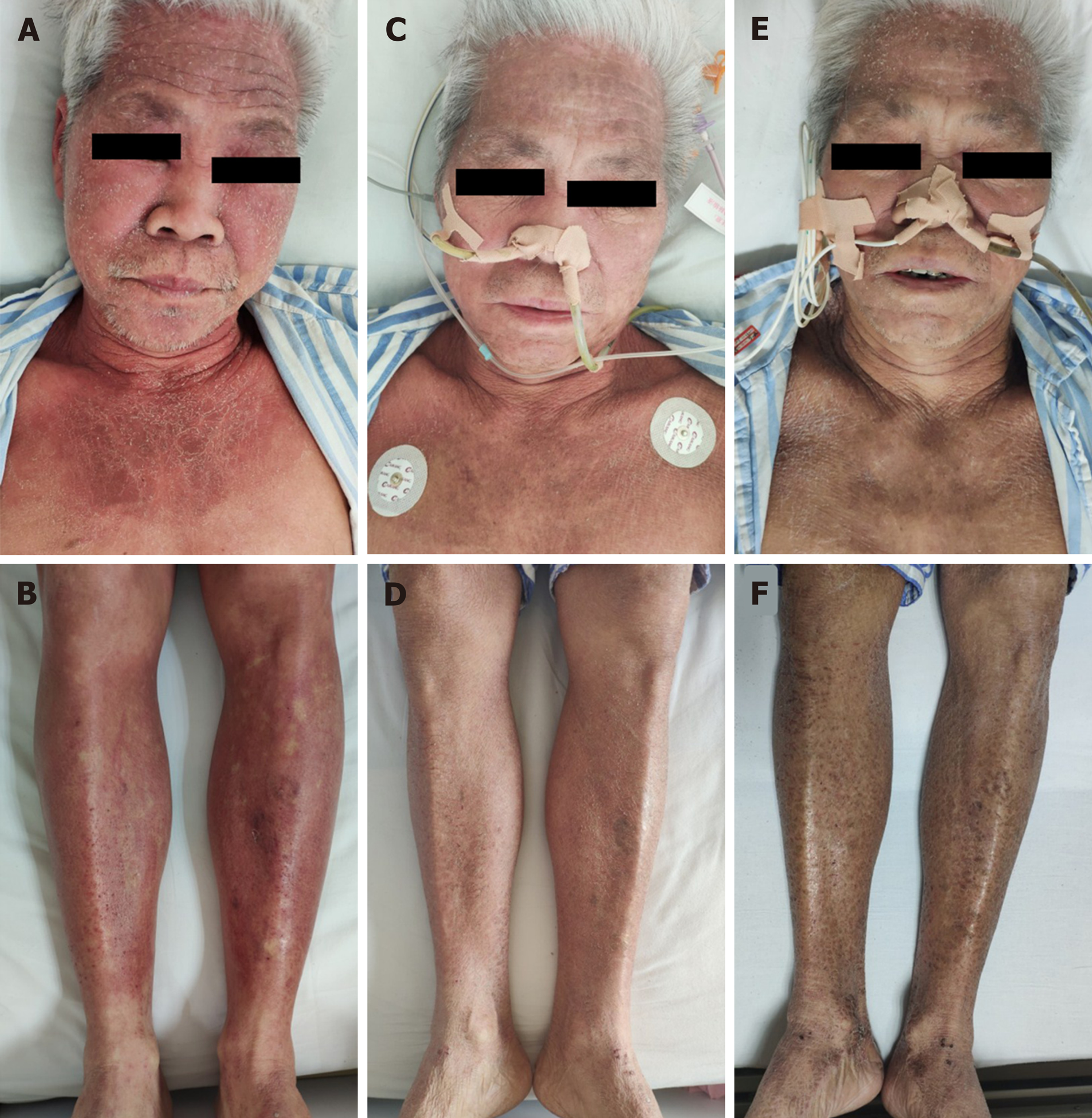 Figure 1 Visible changes of the skin. A, B: The skin over the face, neck, upper chest, and limbs was flushed, accompanied by desquamation before surgery; C, D: Flushing was obviously relieved on day 5 postoperatively; E, F: At 2 wk after surgery, flushing faded entirely and skin pigmentation was visible.
Laboratory examinations 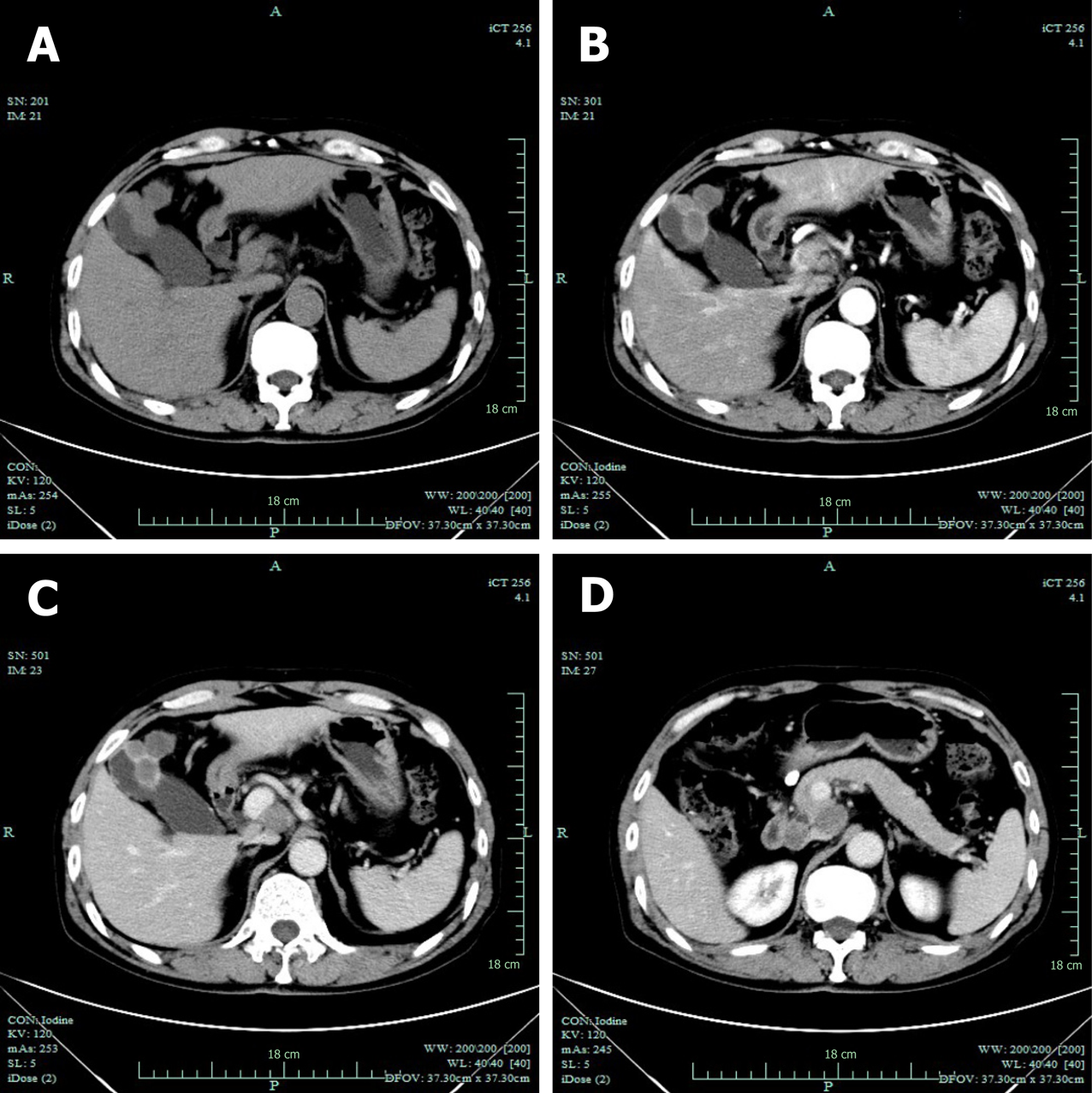 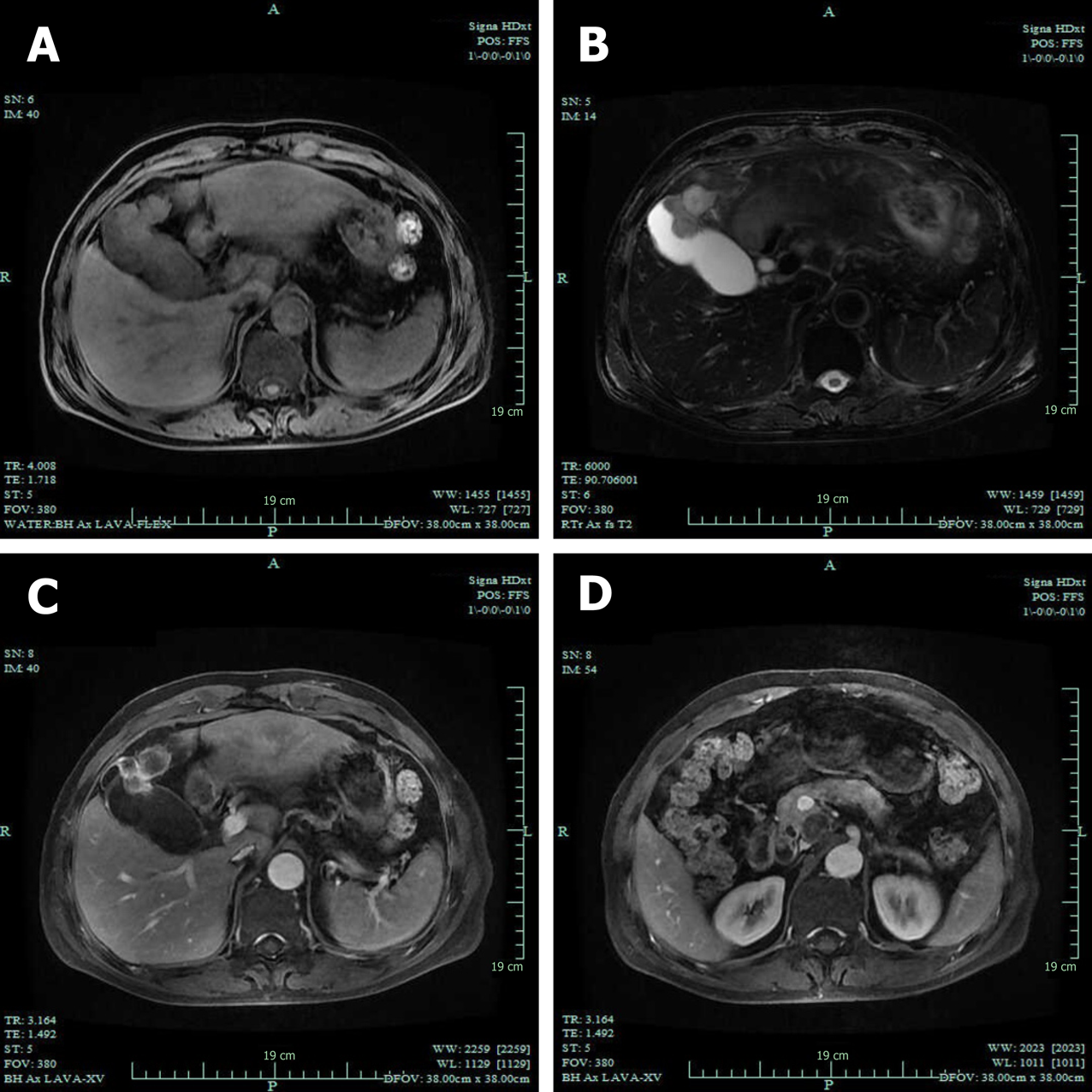 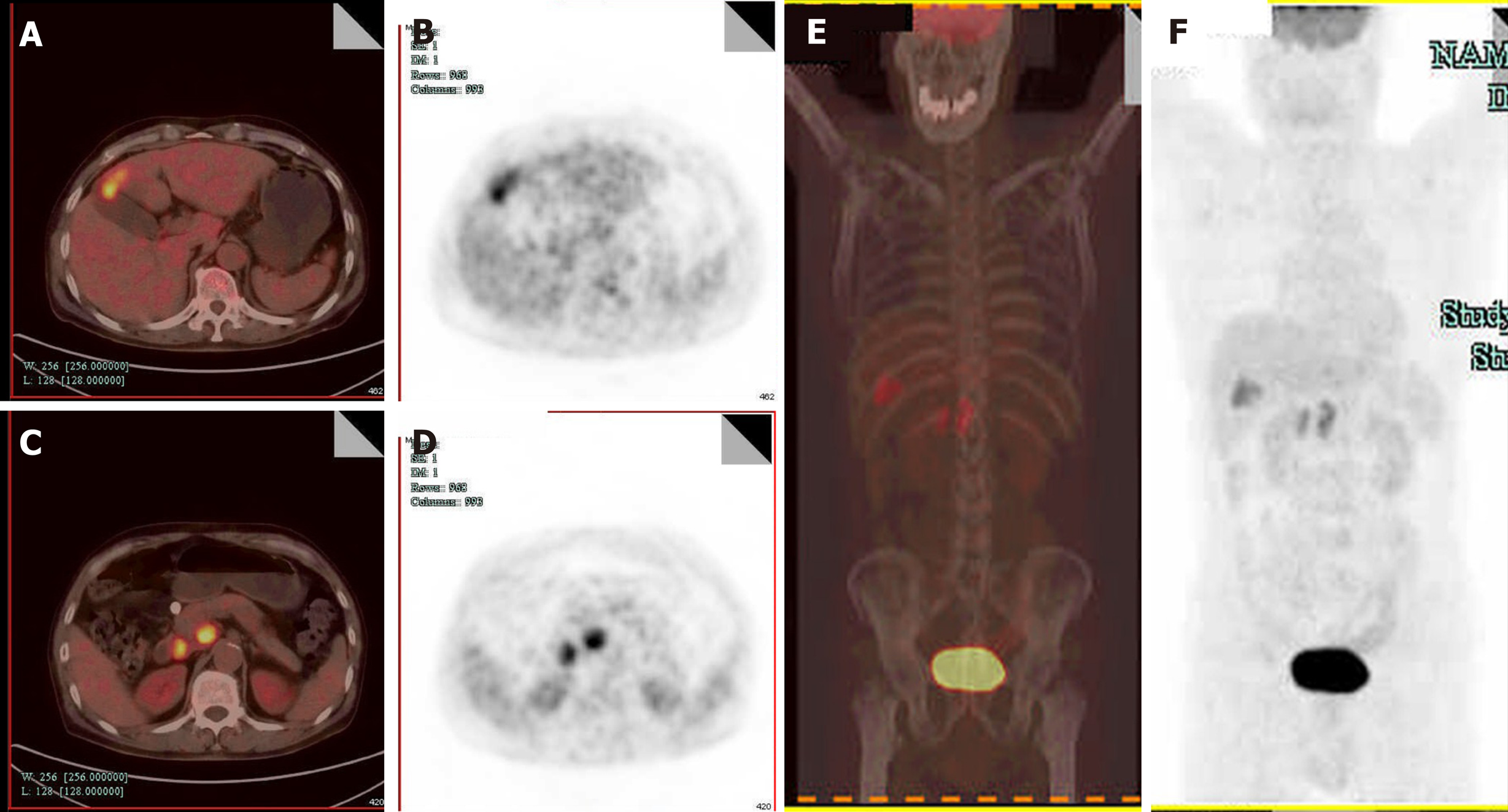 Pathological specimens of the flushed skin revealed that mucin was deposited between the collagen bundles in the dermis. Ultrasound-guided needle biopsy from the GB neoplasm was suggestive of high-grade NEC. Immunohistochemical staining of the biopsy specimen revealed expression of chromogranin A (CgA), synaptophysin (SYN), pan-cytokeratin (pan-CK), CK19, and cluster of differentiation (CD) 56.

The final diagnosis was GB-NEC due to pathology and immunohistochemistry of the biopsy specimen.

Intraoperative exploration showed that two lymph nodes in the portacaval space were firm and immovable, which adhered to the pancreas and duodenum respectively, and therefore could not be harvested completely. En bloc cholecystectomy, resection of hepatic segments IVb and V, pancreaticoduodenectomy, and regional lymphadenectomy were performed. 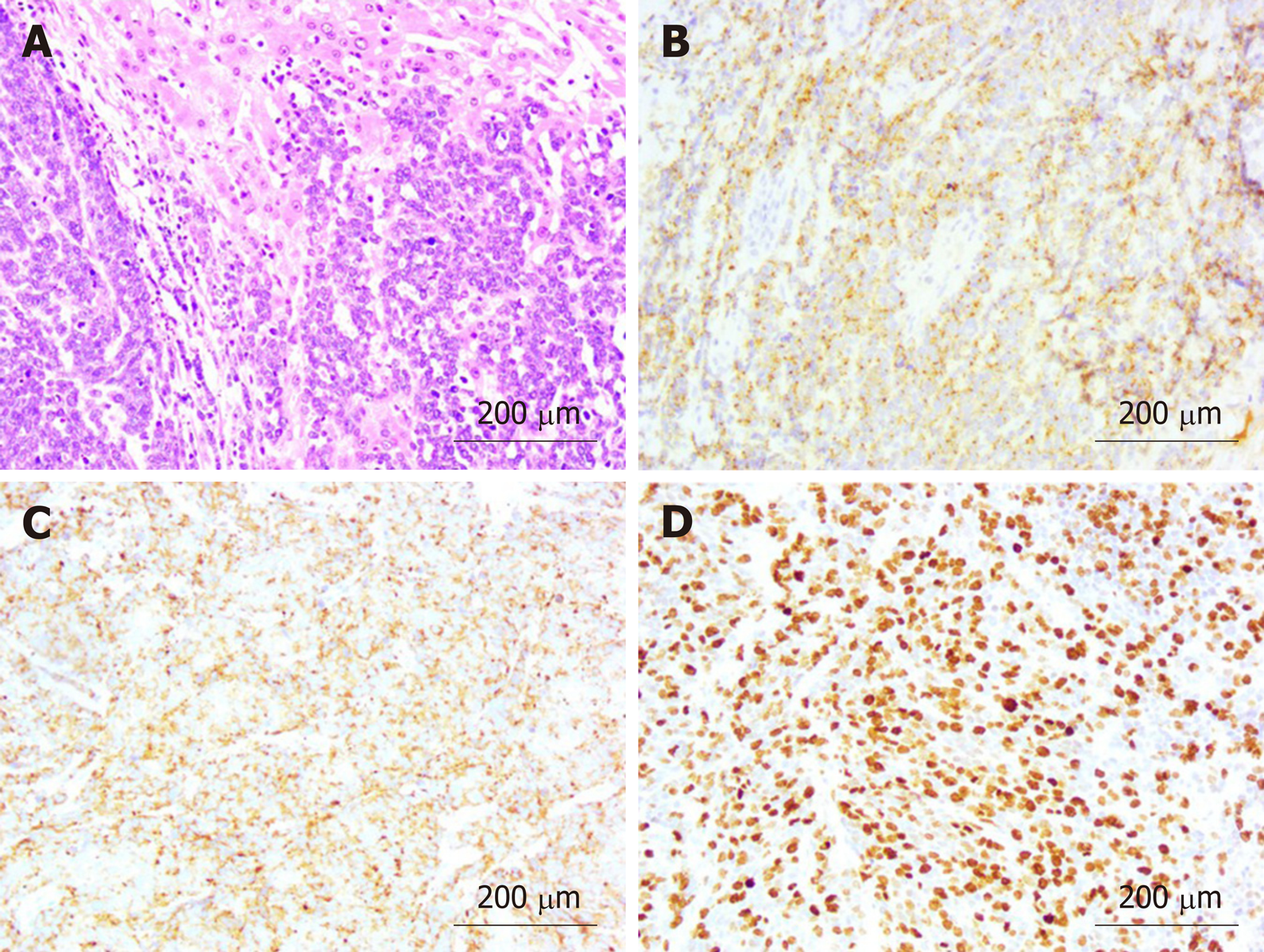 The level of NSE decreased to 12.6 ng/mL 2 d after surgery. Flushing was obviously relieved at day 5 postoperatively (Figure 1C and D), and 2 wk after surgery, flushing faded entirely and skin pigmentation was visible (Figure 1E and F). The patient refused adjuvant therapy, such as chemotherapy. On telephonic follow-up, the son stated that the skin became flushed in the 3rd month after surgery and the patient passed away in the 7th month.

GB-NENs account for a particularly small group of NENs. According to a survey by the Surveillance, Epidemiology and End Result program, the incidence of GB-NEN was < 0.74/100000 between 1973 and 2005, accounting for 0.5% of all NENs[7]. Compared to GB adenocarcinomas, GB-NEC has a tendency of advanced disease progression at diagnosis, poor differentiation of cells and high rate of lymphatic metastases[8].

Functional NENs might cause symptoms due to peptide hormones. Typical symptoms of carcinoid syndrome are flushing, diarrhea, wheezing, and edema. Nevertheless, the most common symptom of GB-NENs is epigastric pain. Lack of distinctive manifestations adds to the difficulty of making correct diagnosis preoperatively[9]. In addition, because of the lack of early-stage symptoms and aggressiveness of the carcinoma, GB-NECs are often diagnosed at an advanced stage with adjacent liver invasion and lymph node metastasis, resulting in poor prognosis[5,10]. The classification and grading criteria for GB-NENs correlates with Ki-67 index and mitotic rate. According to the 2019 World Health Organization classification of tumors of the digestive system[11], our patient had high-grade and poorly differentiated NEC, because Ki-67 index was > 80% and the carcinoma was small-cell type. According to the Eighth Edition of the AJCC Cancer Staging Manual, the NEC in our case report is classified as T4N0M0.

The clinicopathological features and follow-up results of the reported GB-NENs associated with rare manifestations, including the present case, are described in Table 1[12-17]. The patient age ranged from 52 to 79 years (mean: 65 years). There were no significant gender-related differences. Patients had various symptoms, such as flushing (cases 1 and 6), wheezing (case 1), Cushing’s syndrome (cases 2 and 3), hypoglycemia (case 4), and watery diarrhea (case 5). GB-NEN can arise in any part of GB. Immunohistochemically, cases 1, 2, 4, and 6 presented with intense immunoreactivity for chromogranin and SYN, while cases 1, 4, and 6 presented with intense immunoreactivity for CD56.

Imaging examinations including ultrasonography, CT, magnetic resonance imaging, and PET can indicate GB neoplasm. According to an article that compared CT features between GB-NEN and GB adenocarcinoma, the former showed well-defined margins and had larger hepatic and lymph node metastasis than adenocarcinomas[18]. One recent study found that primary small cell GB-NENs mainly presented as a large, heterogeneous GB neoplasm with extraluminal growth[19]. The GB-NEC in our case manifested as a large neoplasm with hepatic and lymph node metastasis, in accordance with the above findings. 18F-fluorodeoxyglucose PET/CT plays an important role in defining aggressiveness of high-grade gastro-entero-pancreatic NENs and providing with prognostic information, especially when combined with 68Ga-labelled somatostatin analogues PET/CT[20]. High sensitivity has been proved for PET/CT with 68Ga-labeled peptides in patients with suspected NENs[21,22]. The utility of Gallium-68-1,4,7,10-tetraazacyclododecane-N,N',N″,N‴-tetra acetic acid-D-Phe1-Tyr3-octreotate (68Ga-DOTATATE) PET/CT has been discussed recently, which gives relevant information for accurate staging of gastro-entero-pancreatic NENs and selection of appropriate treatment intervention[23]. Gallium-68-1,4,7,10-tetraazacyclododecane-N,N',N'',N'''-tetra acetic acid-D-Phe1-Try3-octreotide (68Ga-DOTATOC) PET/CT is reported as an effective tool in the localization of unknown primary NENs[24,25].

GB-NEN is often misdiagnosed preoperatively, and most GB-NENs are discovered by pathology and immunohistochemistry[26-28]. In order to make a definite diagnosis preoperatively and selection of appropriate treatment intervention, percutaneous biopsy can be performed to assess GB neoplasm[29-31]. In 75% of NENs, neoplasm can stain positive for SYN, followed by CgA.

According to the National Comprehensive Cancer Network Guidelines for Hepatobiliary Cancer (Version 4. 2019), if GB-NEC is restricted to the lamina propria, a simple cholecystectomy is adequate. However, for patients with T2 or higher carcinoma, cholecystectomy combined with hepatic resection and lymphadenectomy can improve survival. The increased survival rate has been realized for locally invasive GB-NECs based on radical surgery followed by adjuvant chemotherapy[32]. In some cases, in which the neoplasm is unresectable or specimen margins have neoplasm involvement, systemic chemotherapy can be the treatment intervention[2]. Adjuvant therapy is based on dissemination state, resection margin and histological classification. However, for biliary NEN there are no consensual indications for adjuvant therapy[33]. Gemcitabine-based and fluoropyrimidine-based combination chemotherapy regimens are recommended for the treatment of patients with advanced biliary tract cancer. The role of radiotherapy is unclear. Radiotherapy might be useful for local control and palliation of pain from metastatic bone disease, but NENs are generally not sensitive to traditional radiotherapy[34,35]. The effectiveness of biotherapy (like SST analogs) has been demonstrated in controlling symptoms in some gastro-entero-pancreatic NENs, such as SST-receptor-positive inoperable gastro-entero-pancreatic NEN[36]. In the present case, the patient refused adjuvant therapy and survived for 7 mo after surgery. Maybe chemotherapy would have inhibited the recurrence and done some good to the patient’s survival period.

Our case report had several limitations. First, we did not determine levels of serum CgA, serum serotonin and urinary 5-hydroxyindole acetic acid preoperatively. So we could not diagnosis the patient’s disease as carcinoid syndrome[37]. However, the patient’s symptom was of 2 mo duration and was obviously relieved at day 5 postoperatively. In addition, we ruled out immunological disease and dermatosis by the examination of antinuclear antibody titer, antibodies to double-stranded DNA, ribonucleoprotein, Sm nuclear antigen, scleroderma-70 protein, Jo-1 protein and pathological finding of the flushed skin. Therefore, his disease was suspected as carcinoid syndrome. Second, our case report lacked intra-operatory images and photographs of the resected neoplasm. We provided the size of the neoplasm and location to make up for this limitation.

In most cases, the symptoms of patients with GB-NEN are not distinctive, but it should be kept in mind that a few patients present with carcinoid syndrome. Distinctive manifestation combined with imaging helps to make correct preoperative diagnosis. Percutaneous biopsy can be an option to identify the neoplasm characteristics. Radical surgery including cholecystectomy and hepatic resection combined with regional lymphadenectomy plus adjuvant chemotherapy is recommended for advanced GB-NEC. Further studies on chemotherapy, radiotherapy, and biotherapy are needed for the standardization of treatment intervention including surgery.