Pancreatic cystic lesions (PCLs) have been increasingly recognized in clinical practice. Although inflammatory cysts (pseudocysts) are the most common PCLs detected by cross-sectional imaging modalities in symptomatic patients in a setting of acute or chronic pancreatitis, incidental pancreatic cysts with no symptoms or history of pancreatitis are usually neoplastic cysts. For these lesions, it is imperative to identify mucinous cysts (intraductal papillary mucinous neoplasms and mucinous cystic neoplasms) due to the risk of their progression to malignancy. However, no single imaging modality alone is sufficient for a definitive diagnosis of all PCLs. The cyst fluid obtained by endoscopic ultrasound-guided fine needle aspiration provides additional information for the differential diagnosis of PCLs. Current recommendations suggest sending cyst fluid for cytology evaluation and measurement of carcinoembryonic antigen (CEA) levels. Unfortunately, the sensitivity of cytology is greatly limited, and cyst fluid CEA has demonstrated insufficient accuracy as a predictor of mucinous cysts. More recently, cyst fluid glucose has emerged as an alternative to CEA for distinguishing between mucinous and nonmucinous lesions. Herein, the clinical utility of cyst fluid glucose and CEA for the differential diagnosis of PCLs was evaluated.

Core tip: Incidental pancreatic cysts have been found in far more patients with the improvement of cross-sectional imaging tests. Many of these lesions have malignant potential, especially the mucinous lesions, and imaging alone is not enough to guarantee definitive diagnosis. Cyst fluid carcinoembryonic antigen (CEA) has been used as the most important cyst fluid marker to distinguish mucinous from nonmucinous cysts. More recently, glucose has emerged as a useful cyst fluid marker for the identification of pancreatic mucinous cysts with an accuracy similar to or even better than CEA.

Pancreatic cystic lesions (PCLs) have been detected in between 2.4% and 19.6% of the general population during imaging tests [computed tomography (CT), magnetic resonance imaging (MRI)] for unrelated reasons[1,2]. In the absence of previous episodes of acute pancreatitis, which could increase the chance of pseudocysts, most of these lesions are neoplasms, and some of them have significant malignant potential, especially the intraductal papillary mucinous neoplasms (IPMNs) and mucinous cystic neoplasms (MCN)[3-5].

The accurate diagnosis of PCLs is critical to guarantee the best management for these patients, whether through surgical resection or periodic surveillance[6-8]. Unfortunately, there is no a single test accurate enough to assure a definitive diagnosis for all PCLs, particularly for those that are isolated unilocular cystic lesions, with neither perceptible communication with the main pancreatic duct (MPD) nor previous episodes of pancreatitis[9]. Therefore, a combination of information obtained from demographics, clinical history and imaging, as well as cytopathology and cyst fluid markers obtained by endoscopic ultrasound-guided fine needle aspiration (EUS-FNA), has been used for the differential diagnosis of PCLs (Table 1).

Noninvasive cross-sectional imaging tests (CT and MRI) are usually responsible for detecting unsuspected PCLs and represent the first diagnostic approach for these lesions. EUS is a complementary tool when the diagnosis is undetermined by clinical and cross-sectional imaging data, when there are worrisome features present, or if surgery is believed to pose a high risk. Regarding the characteristics of mucinous lesions, IPMNs are radiographically classified according to the dilation of the ductal system as main duct-IPMN (MD-IPMN), branch duct-IPMN (BD-IPMN), or mixed type-IPMN. MD-IPMN is characterized by focal or diffuse dilation of the MPD to > 5 mm (Figure 1), and by the frequent presentation of a patulous aspect of the ampullary orifice with mucus secretion. Chronic pancreatitis and ductal adenocarcinoma are the most important differential diagnoses for this type of lesion. BD-IPMN is usually a multifocal disease with normal caliber MPD (Figure 2). Mixed type-IPMN shows a dilation of the MPD and the presence of dilated side branches (Figure 3). The MCN is classically a single macrocystic lesion in the body or tail of the pancreas (Figure 4). For nonmucinous cysts, the pseudocyst is usually a thin- or thick-walled unilocular lesion that almost always occurs in the setting of an episode of acute pancreatitis or pancreatic trauma, as well as in patients with chronic pancreatitis. For serous cystic lesions, numerous microcystic lesions with thin septa are the most common presentation. Central calcified fibrosis is a classic aspect of this type of lesion[13-15]. 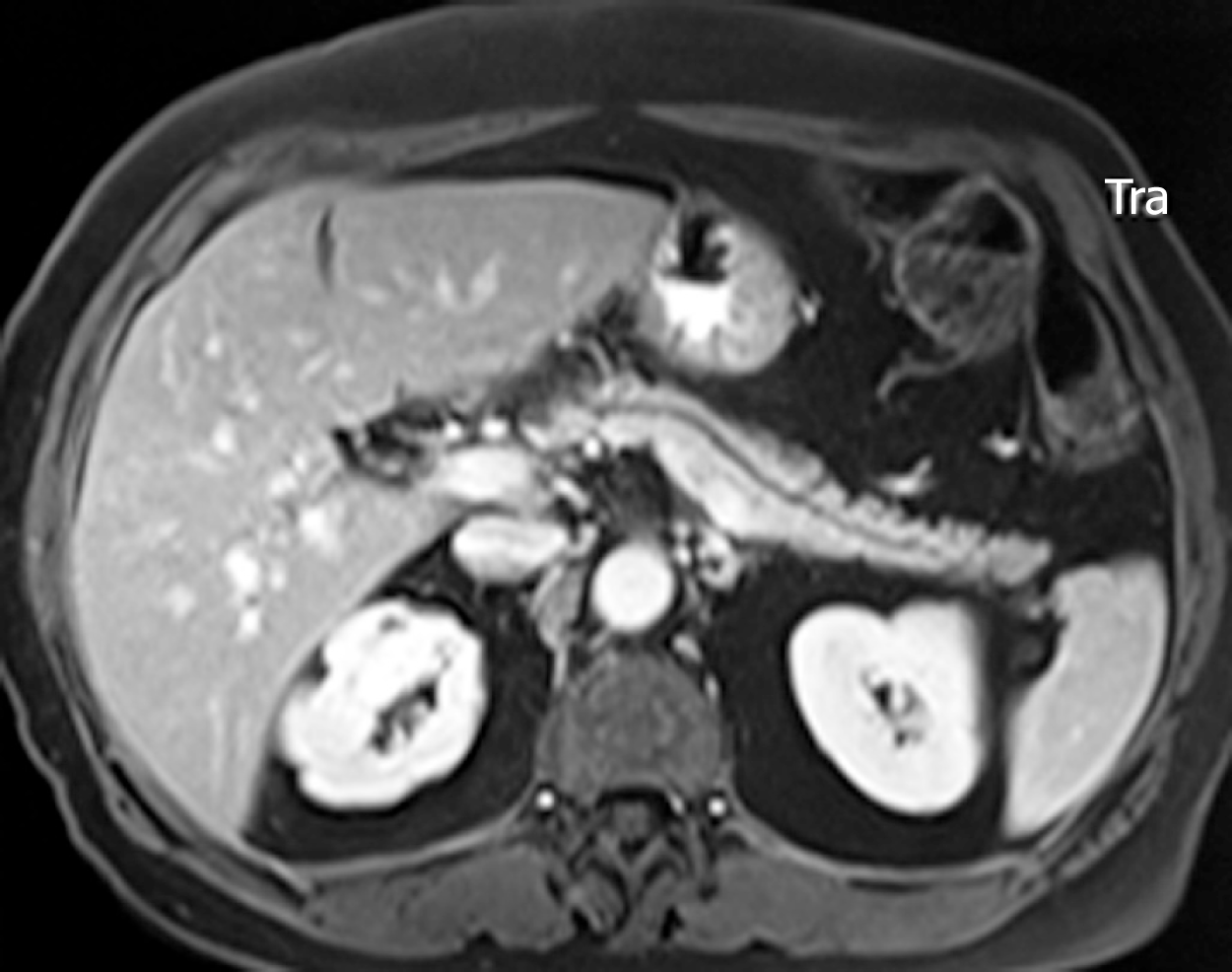 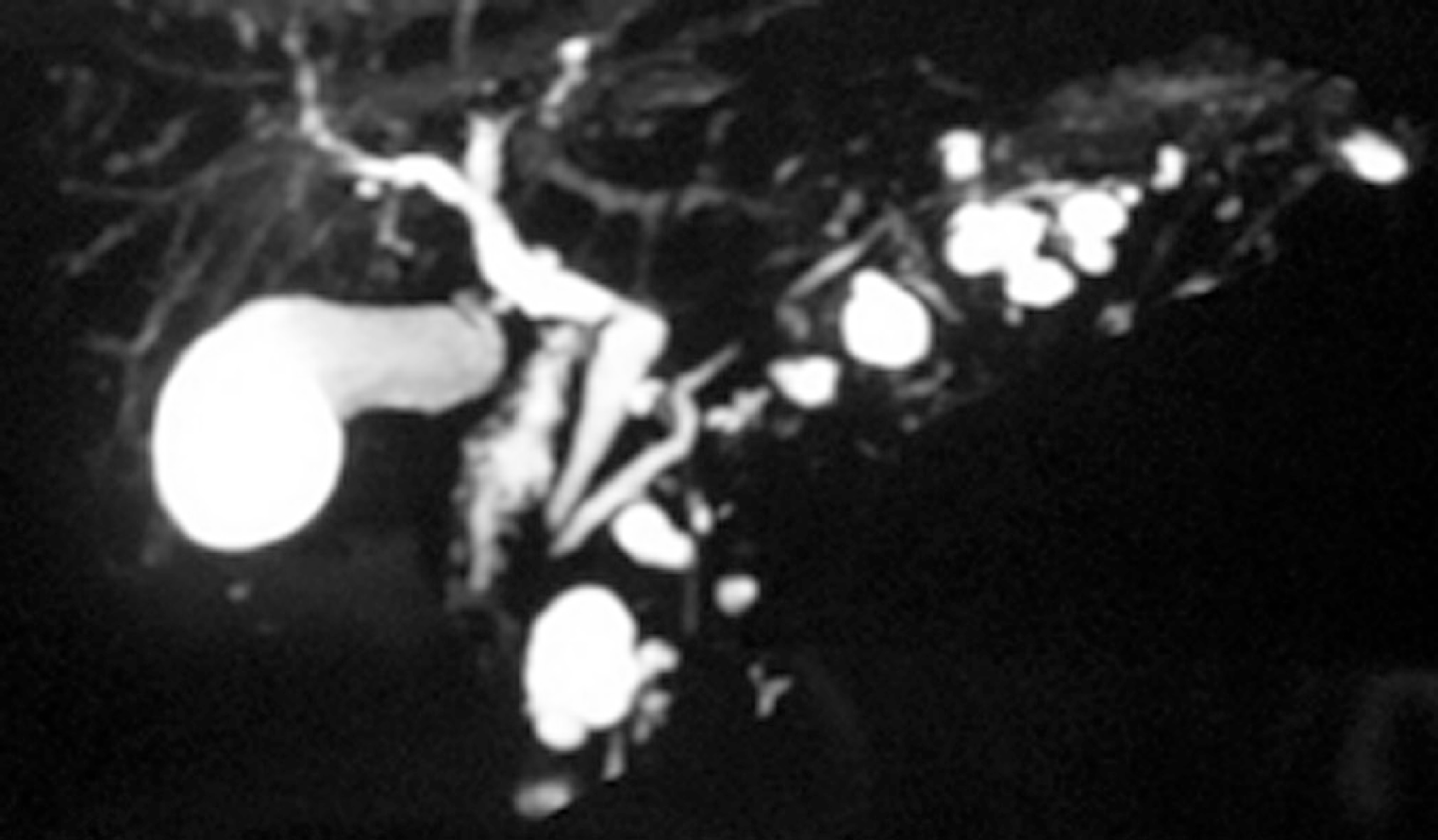 Figure 3 Mixed-intraductal papillary mucinous neoplasms. The main pancreatic duct is markedly dilated in the pancreatic head with multiple dilated side branches throughout the pancreas. 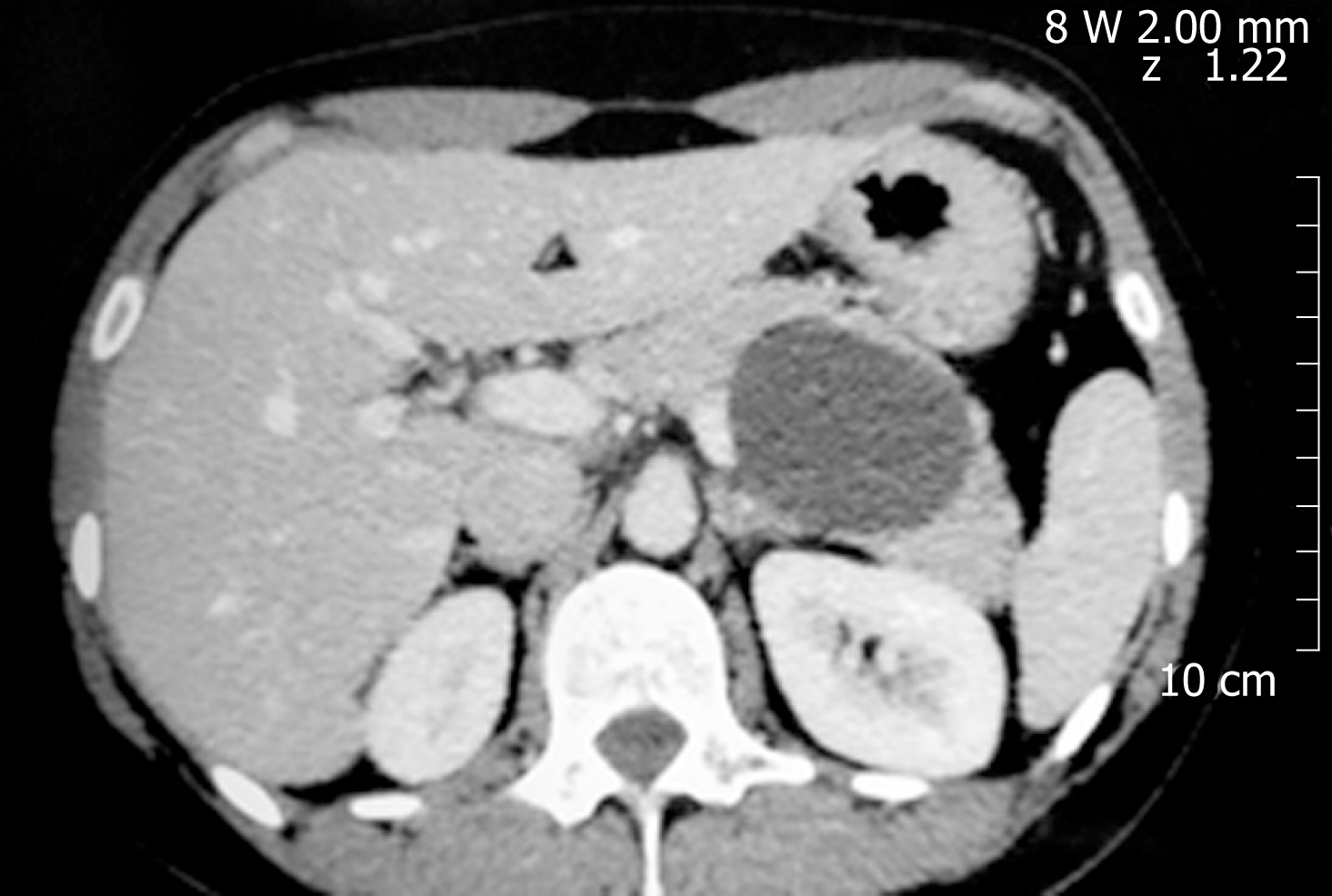 Figure 4 Mucinous cystic neoplasm. An unilocular cyst with thin walls and homogeneous content on computed tomography in the pancreatic body.

Nevertheless, there is not an ideal imaging modality to guarantee a correct diagnosis for all PCLs. There is a significant imaging overlap for different types of PCLs, and specific cystic lesions do not always disclose their most typical imaging features. The accuracy of CT and MRI/MR cholangiopancreatography in determining a definitive diagnosis is approximately 50%[16-18]. For EUS morphology alone, there is slightly more than chance interobserver agreement among experienced endosonographers for the diagnosis of the specific types of PCLs[19].

Since imaging alone is not sufficient for a definitive diagnosis of many PCLs, EUS-FNA provides additional information that can be helpful in confirming the type of cyst. The aspirated cyst fluid allows cytological analysis, as well as assessment of biochemical and molecular factors and tumor markers.

Cytologic diagnosis using cystic fluid relies on the presence of confirmed malignant cells, mucin-containing cells, or glycogen-containing cells. The specificity of cytology in most studies is excellent and approaches 100%, but the sensitivity is usually unsatisfactory, especially due to the paucicellular nature of the samples and the presence of blood and benign epithelial cells from the gastric or duodenal mucosa. In a meta-analysis by Wang et al[20] of 16 studies and 1024 patients, the specificity of malignant cytology was 94%, but the sensitivity was only 51%. These data resemble those from another meta-analysis by Thornton et al[21].

Given the unsatisfactory sensitivity of cytology for PCLs, the value of tumor markers in the aspirated cyst fluid has been examined. In the well-known multicenter prospective study by Brugge et al[22], a cut-off of 192 ng/mL for CEA demonstrated a sensitivity of 75%, specificity of 84%, and accuracy of 79% for the differential diagnosis between mucinous and nonmucinous cystic lesions. This performance was significantly better when compared to EUS morphology alone (51%) or cytology (59%) (P < 0.05). These results were corroborated in a meta-analysis by Thornton et al[21]. However, a multicenter study demonstrated a misdiagnosis of 40% for mucinous and 17% for nonmucinous lesions by using the same cut-off[23]. Given the risk of misclassification, other studies have used higher CEA thresholds in an attempt to improve the diagnostic accuracy for mucinous lesions, despite compromising the sensitivity of the marker[23-27]. A CEA level of > 800 ng/mL had a specificity ranging between 86% and 98% and a diagnostic accuracy between 58% and 79% for detecting mucinous lesions, but the sensitivity was too low, ranging from 33% to 48%[23,24,26]. On the other hand, similar results have been found with lower thresholds. Gaddam et al[23], using a cut-off value of 105 ng/mL, yielded a sensitivity of 70% and specificity of 63%, albeit 30% of mucinous lesions were misdiagnosed. With an even lower CEA cut-off of only 48.6 ng/mL, Oh et al[28] described a sensitivity, specificity, and accuracy for the diagnosis of mucinous cysts of 72.4%, 94.7%, and 81.3%, respectively.

Unlike the high CEA levels and the correlation with mucinous lesions, CEA levels of < 5 ng/mL are highly suggestive of nonmucinous lesions, with sensitivity ranging from 44% to 50%, specificity higher than 95%, and diagnostic accuracy ranging from 67% to 78%[24,26]. Most of these lesions were serous cystic neoplasms in the presence of low levels of amylase. However, in the experiment of Gaddam et al[23], despite median CEA levels for serous cysts having been found to be 1.7 ng/mL, 31% of serous cysts would have been misclassified when using a cut-off of 5 ng/mL.

Thus, cyst fluid CEA alone cannot be regarded as a perfect marker for the differential diagnosis of PCLs at this time. CEA levels have been demonstrated to be insufficiently accurate as a predictor of mucinous cysts, and the optimal cut-off is controversial. The ranges of cyst fluid CEA concentration from mucinous and nonmucinous cysts overlap considerably according to the CEA cut-off used[23,24]. Cysts with viscous fluid and CEA values between 10 ng/mL and 200 ng/mL represent the most important diagnostic challenge. Particularly for IPMNs, Yoon et al[29] demonstrated that cyst fluid CEA levels vary considerably by histologic type, with the gastric and pancreatobiliary types presenting the highest median CEA concentrations (619.8 and 270 ng/mL, respectively), and the intestinal and oncocytic types presenting the lowest median concentrations (83 and 5.1 ng/mL, respectively, P = 0.012). Furthermore, there has not been a significant correlation between the risk of malignancy and cyst fluid CEA levels[28,30,31]. CEA measurement is a laborious technique that requires specific laboratory capabilities that are costly and time-consuming. Commercially available methods for CEA measurement have been validated for the analysis of serum or plasma but not for pancreatic cyst fluid, and there could be significant variation in the results among different methods. Moreover, CEA thresholds are not necessarily transferable between different methods[32].

Molecular markers in pancreatic cyst fluid seem to be promising for the future, especially with the evaluation of GNAS and KRAS[33-35]. However, molecular markers are even more expensive than CEA, the analyses are performed using specialized technologies offered in few referral laboratories, and their results take a long time to be available. Additionally, molecular profiling remains under investigation and is not widely available. Currently, other cyst fluid markers are being sought, and a combination of these markers with CEA seems to be a more reasonable alternative.

PCLs have the potential to be malignant, and imaging, cytology, and cyst fluid CEA have demonstrated inadequate abilities for accurate diagnosis. In this context, glucose has emerged as a useful cyst fluid marker for distinguishing between mucinous and nonmucinous cysts with accuracy similar to or even better than CEA. Indeed, the initial results are promising, and more high-quality multicenter studies must reproduce these findings to corroborate cyst fluid glucose for routine use in the differential diagnosis of these lesions.