To explore factors associated with persistent hepatitis B virus (HBV) infection in a cohort of hepatocellular carcinoma (HCC)-affected families and then investigate factors that correlate with individual viral load among hepatitis B surface antigen (HBsAg)-positive relatives.

We evaluated non-genetic factors associated with HBV replication in relatives of patients with HCC. Relatives of 355 HCC cases were interviewed using a structured questionnaire. Demographics, relationship to index case, HBsAg status of mothers and index cases were evaluated for association with the HBV persistent infection or viral load by generalized estimating equation analysis.

Sex and generation play important roles on HBV viral load. Maternal birth age and nutritional changes could be the reasons of viral load difference between generations.

Core tip: Familial clustering of chronic hepatitis B infection is identified in this study. Most of the hepatitis B surface antigen (HBsAg) carriers in this cohort are in families of an HBsAg-positive index case. A high prevalence of HBsAg is found in the siblings’ generation and in offspring of an HBsAg-positive mother. The HBsAg status of index cases and HBsAg status of the mother are important factors for determining the persistence of hepatitis B virus (HBV) infection in hepatocellular carcinoma families. Sex and generation are factors associated with HBV replication. Perinatal infection has a great influence on male offspring’s HBV replication.

In the families of hepatitis B virus (HBV)-infected individuals, clustering of chronic hepatitis B surface antigen (HBsAg) carriers and hepatocellular carcinoma (HCC) are common[1-6]. HBV is highly infectious[7,8], and a substantial number of individuals who are exposed to HBV early in life become chronic HBsAg carriers[4,9-11]. Furthermore, intra-familial transmission of HBV could underlie the high incidence of HCC among family members[3,4].

Given the familial clustering of chronic HBsAg carriers in HCC families[2,5,6,9,21] with maternal status, those relatives having a similar genetic background may be instrumental in helping clinicians determine any non-genetic factors that may be associated with persistent HBV infection and viral replication. In this respect, we explored factors associated with persistent HBV infection in a cohort of HCC-affected families and then investigated factors that correlated with individual viral load among HBsAg-positive relatives.

Patients with HCC who were diagnosed at Chang Gung Memorial Hospital, Lin-Kou Medical Center were included as index cases. From 2003 to 2007, relatives of these patients were prospectively invited to complete a survey concerning liver diseases. Spouses of index cases or spouses of their relatives were excluded.

This study was approved by the Institutional Review Board of Chang Gung Memorial Hospital, Taiwan (IRB: 91-124), and written informed consent was obtained from all participants before the study. All experiments and data comparisons were carried out in compliance with relevant laws and guidelines and in accordance with the ethical standards of the Declaration of Helsinki.

Each relative that was enrolled in the study underwent liver biochemistry tests for α-fetoprotein and viral markers, as well as a liver ultrasound. Serum HBsAg and hepatitis C virus antibody (anti-HCV) were measured by enzyme-linked immunosorbent assay (Abbott Diagnostics, Chicago, IL, United States). Maternal HBsAg was assayed at enrollment or obtained by reviewing our hospital records.

Thomas et al[24] reported that body height at adulthood may predict the nutritional status of a population in a particular birth year. Hence, we estimated the nutritional status of Taiwan based on body height data according to birth year for subjects who received a general checkup between year 2000 and 2004 at Chang Gung Memorial Hospital[9] and in the cohort of HCC families.

The relatives included in the study were individuals from the same household. Because both individual and familial responses from the same household should be evaluated, we used the generalized estimating equation (GEE) method to determine correlations between the data and each binary response (e.g., for HBsAg status or HBV DNA level) using the exchangeable working correlation structure[25,26] in our first and second stages of the analyses. Univariate and multivariate analyses in the two stages were assessed using the GEE method with the PROC GENMOD procedure in SAS 9.3 (SAS Institute Inc., Cary, NC, United States).

The role of sex hormones in the development and progression of HBV-associated HCC has been reported[12,13]. Therefore, we added a new familial view on HBV replication status in this cohort. We examined intra-familial HBV replication among HBsAg-positive siblings of the same sex in each family. A sex difference with respect to HBV viral load in families clustered with HBsAg-positive siblings. We used logistic regression to explore the sex effect for families in which the mother was positive for HBsAg as well as in all families.

There were 806 relatives and 205 spouses in the study. Twenty-five relatives were diagnosed with liver cirrhosis by ultrasound at screening. None of the study relatives had HCC detected on initial screening. Three siblings and three children of the indexed HCC patients developed HCC during the subsequent follow-up study. 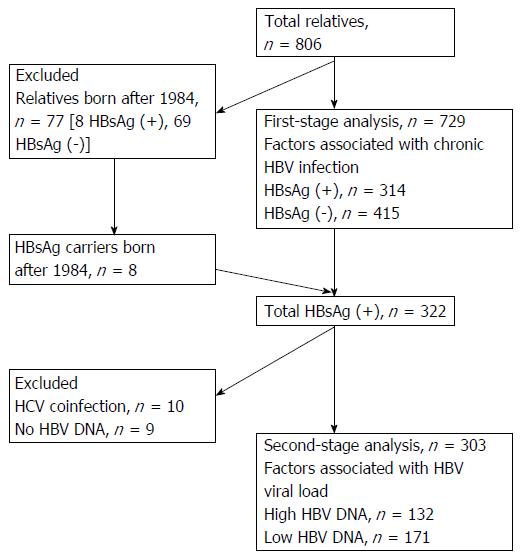 Figure 1 Flow chart depicting the collection and potential exclusion of subjects for our cohort and the stages of analysis.

Among the 314 HBsAg-positive relatives born before 1984 and 8 relatives born after 1984, for this second-stage analysis we excluded 10 relatives with dual HBV and HCV infections and 9 relatives who did not have an HBV DNA assay (Figure 1). A total of 303 individuals were thus included in the HBV viral load association analysis. 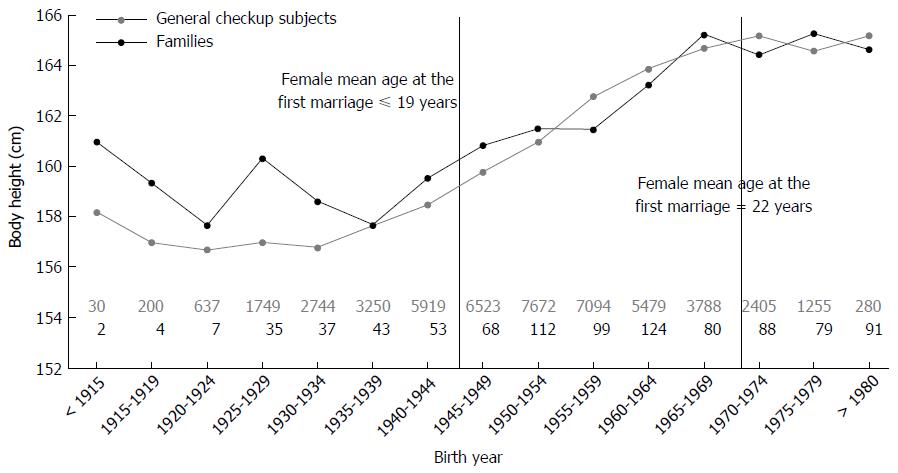 Figure 2 Body height changes according to birth year for subjects of our cohort who underwent a general checkup (gray line) and hepatocellular carcinoma families (black line). The two horizontal lines indicate the female mean age at first marriage for each birth-year period. The mean age at first marriage before 1945 was ≤ 19 years and was 22 years in 1970.
Intra-family comparison of HBV viral load among HBsAg-positive siblings

For 11 families (23.91%), older siblings had a higher level of HBV DNA than their younger siblings; this trend was opposite for only 5 families (10.87%). Older siblings tended to have a higher HBV DNA level than their younger siblings, but the difference was not statistically significant owing to the small number of cases. Because all siblings were generally infected at an early stage of life[4,9-11], this phenomenon contradicts the general trend that HBV replication declines with increasing age[28,29].

This study reveals a familial clustering of chronic HBV infection. As shown in Table 1, most of the chronically HBV-infected carriers (84.57%) in this cohort were families of an HBsAg-positive index case. A high prevalence of HBsAg was apparent for the siblings’ generation (86/122 or 70.49%, P < 0.0001) and for offspring of an HBsAg-positive mother (129/182 or 70.88%, P < 0.0001). These findings remained significant in the multivariate analysis. Notably, the majority of index cases were male (72.93%), indicating that both vertical and horizontal infections were present in HCC families.

HBV replication phase or viral load plays roles in determining the prognosis of chronic persistent HBV infection[2,30]. In our study, we found that sex and generation played independent roles in determining HBV DNA level (Tables 3 and 4). HBV viral load was higher for subjects with HBV genotype C than genotype B in the univariate analysis (P = 0.008; Table 3), but this difference was not statistically significant in the multivariate analysis (Table 4).

Sex is a well-known factor associated with chronic HBV infection[9]. We therefore added a new family view on HBV replication status in this cohort, and we identified a sex difference with respect to HBV viral load in families that had HBsAg-positive siblings (Table 5). HBV viral load was generally higher in male than female siblings (OR = 29.96, P = 0.007). In addition, male siblings in families of an HBsAg-positive mother tended to be in the high HBV DNA group, whereas female siblings were generally in the low HBV DNA group (OR = 21, P = 0.024). Male offspring are more vulnerable to the influence of maternal HBsAg status, whereas female offspring may overcome the maternal influence of persistent HBV replication.

Relatively high HBV replication in older generations has not been well documented in the literature. A study of pregnant women between 1990 and 1995 revealed a progressively decreasing prevalence of hepatitis B e antigen (HBeAg) among chronically HBV-infected carriers[31]. This finding was confirmed in a longer study spanning 1985 to 2000[32], in which the prevalence of HBsAg remained nearly the same, but the prevalence of HBeAg declined progressively from 40% in 1986 to 18% in 2000. This difference between HBsAg and HBeAg prevalence remained apparent even when the ages of the pregnant women were considered[32].

In our previous study of HCC families, we found that older siblings frequently cleared HBeAg later than did their younger siblings[21], and an HBV phylogenetic study yielded similar findings[33]. Among 13 families with an HBsAg-positive mother, the 11 oldest siblings were HBeAg positive whereas only 3 of the youngest siblings were HBeAg positive. These observations provided a clue that maternal age at birth might influence HBV replication in offspring.

A 2014 review article by Bertoletti et al[35] presented an interesting viewpoint that immune responses change during the life of an individual, based on the observed higher mortality of influenza infection at age 30 than at age 20. This implies that a more vigorous immune response produces a more fulminant disease by age 30, whereas a weaker immune response produces a self-limited infection at age 20. A similar situation can be found for chronic HBV infection in that such patients usually enter the immune clearance phase by age 30. We suspect that generational differences might be associated with differences in maternal immunity at the time of an offspring’s birth[36]. Further study will be needed.

During the time frame of our study, we did not have data on the nutritional habits of individuals, but for most participants we obtained body height data, which may reflect long-term nutritional status during the major growth period of humans[24,38]. In our cohort, the mean body height remained < 159 cm for individuals born before 1945. From about 1955 to 1965, however, mean body height increase rapidly to > 164 cm (Figure 2). These findings indicate a significant change in socioeconomic status of the Taiwanese population after the Second World War. Hence, increased food consumption and decreased physical activity may have contributed to the observed increase in the prevalence of hepatic steatosis[39]. Therefore, lifestyle and nutritional habits are factors that may have contributed to our observed shortened HBV replication phase in the younger generation.

We conclude that the generation of the family member, index HBsAg, and maternal HBsAg are important factors for predicting HBV persistence in HCC families. Sex and generation are factors associated with HBV replication. Perinatal infection substantially influences the duration of HBV replication in male offspring.

We are grateful to the National Science Council and the Institute of Biomedical Sciences and Academia Sinica of Taiwan for their support.

Based on the finding that older generation and older siblings have higher viral load, the authors suspect that maternal age at birth and nutritional status might be related to generational differences on viral load. HBsAg-positive mothers usually associated with high viral load on male offspring, but not on female offspring.

Sex, generation, maternal age at birth and maternal HBsAg status are factors that should be taken into consideration when genetic factors associated with HBV-related outcome are evaluated.

The manuscript from Hsieh et al reported the sex and generation associated with HBV load in hepatocellular carcinoma family. And perinatal infection is a major effect factor for male offspring’s HBV replication. The entire sets of data are nicely presented, and highly supportive of the conclusion.