Between January 2008 and December 2013, 1012 consecutive patients admitted with peptic ulcer bleeding (PUB) were prospectively followed. The pre-endoscopic RS, BBS and GBS, as well as the post-endoscopic diagnostic scores (RS and BBS) were calculated for all patients according to their urgent upper endoscopy findings. Area under the receiver-operating characteristics (AUROC) curves were calculated for the prediction of lethal outcome, rebleeding, needs for blood transfusion and/or surgical intervention, and the optimal cutoff values were evaluated.

Core tip: Endoscopic hemostasis represents the cornerstone of upper gastrointestinal bleeding treatment, and several scores have been developed for the prediction of rebleeding. This is a first study on Croatian patients to include over 1000 participants with peptic ulcer bleeding, and the aim was to compare three scores (Glasgow Blatchford score, Rockall score and Baylor bleeding score) in the prediction of peptic ulcer bleeding treatment outcome, including need for hospital-based intervention or 30-d mortality, 30-d rebleeding rate, 30-d mortality rate, and needs for surgical intervention and blood transfusion, and to find optimal cutoff values that indicate high-risk patients.

Upper gastrointestinal bleeding (UGIB) is a common medical emergency. Incidence rates of UGIB demonstrate variations ranging from 48 to 160 cases per 100000 population[1]. The most common causes of acute UGIB are non-variceal, where 28% to 59% are caused by peptic ulcer bleeding (PUB)[1-3]. Endoscopic hemostasis represents the cornerstone of UGIB treatment, and several scores have been developed for the prediction of clinical intervention (i.e. Rockall score (RS), Glasgow-Blatchford score (GBS), Baylor bleeding score (BBS), Cedars-Sinai Medical Center predictive index, Almela score, AIMS65 score)[4-14]. The recently published American College of Gastroenterology practice guidelines on the management of patients with ulcer bleeding recommend risk assessment in all patients in order to stratify them into high or low risk categories, since it may assist in initial decisions regarding the timing of endoscopy, time of discharge, and level of care[15].

The RS was primarily developed to predict mortality and the GBS to evaluate need for clinical intervention[6-14]. Secondarily, they can be applied to asses rebleeding risk. The BBS was primarily developed to identify patients at high risk for rebleeding after endoscopic hemostasis[6,16]. In previous studies, the GBS has been shown to be better than the pre-endoscopic and post-endoscopic RS in predicting the need for hospital-based intervention in patients with UGIB[6,13,19]. On the other hand, the RS appeared to be better at predicting mortality after rebleeding, contributing to more accurate diagnostics and shorter hospital stay[7,13,14]. Recent studies have shown that early endoscopy (within 24 h of presentation) is performed in only half of patients with UGIB, demonstrating the need for reliable and accurate pre-endoscopic risk assessment[6-15,20-25].

This prospective study was conducted in the University Hospital Center “Sestre Milosrdnice” that covers a population of approximately 300000 in the City of Zagreb, Croatia. All patients presenting to the Emergency Unit between January 2008 and December 2013 with hematemesis, melena, hematochezia, or blood admixture upon nasogastric insertion were considered for study enrolment. If initial work-up indicated the need for hospitalization, patients were admitted to the Interventional Gastroenterology Unit.

Upper gastrointestinal endoscopy was performed in all patients within 24 h of admission. Only patients with gastric and/or duodenal ulcers, or an ulcer at the site of gastro-enteric anastomosis found during emergency endoscopy, without any other possible cause of bleeding were included in the study. All patients with high-risk ulcer stigmata and patients selected depending on clinical judgment received high-dose acid suppression therapy (pantoprazole or esomeprazole 80 mg as an intravenous bolus, followed by 40 mg intravenously 2 times daily or 200 mg daily in the form of continuous infusion for at least 48 h followed by 40 mg daily by mouth). The institution’s ethics committee approved the study. Data was prospectively entered into a database, with patient details stored in a depersonalized manner to protect patient confidentiality.

Shock was defined as syncope or signs of shock at physical examination, including systolic blood pressure less than 100 mmHg and pulse rate more than 100 beats/min.

All patients diagnosed with PUB and high-risk stigmata underwent initial hemostasis (injection of dilute epinephrine into and around the bleeding point, positioning of clips or thermal coagulation, or both, but never epinephrine alone). Two biopsy specimens were obtained from the gastric antrum and body in all patients and the presence of Helicobacter pylori (H. pylori) infection was assessed by histopathological examination of the specimens using hematoxylin-eosin (HE) stain.

All patients with negative histology for H. pylori at index endoscopy had a control endoscopy with repeating biopsy samples, or urea breath test (UBT), performed 2 wk after proton-pump inhibitor treatment was discontinued. Patients in whom the described protocol was not followed were excluded from the study about H. pylori infection.

Rebleeding was defined as one or more signs of recurrent bleeding, including fresh hematemesis or melena, hematochezia, aspiration of fresh blood via nasogastric tube, instability of vital signs, and reduction of hemoglobin levels by 2 g/dL or more, occurring 24-h after the primary bleeding was stopped.

The Mann-Whitney U-test and Kruskal-Wallis analysis of variance test were used to analyze differences in quantitative data. The discriminative ability of the scoring systems to predict outcomes was evaluated by receiver operating characteristics curves (ROC) with 95%CI. The areas under ROC (AUROC) curves were compared using the method of Delong et al[26] (1988) for the calculation of the standard error of the Area Under the Curve (AUC) and of the difference between two AUCs. The optimal thresholds of the GBS, RS and BBS for the prediction of rebleeding, death, and needs for blood transfusion and/or surgical intervention were identified as the threshold associated with the highest Youden index[27]. A two-tailed significance level of 5% was used in all comparisons. All analyses were performed using a statistical package MedCalc for Windows, version 15.8 (MedCalc Software, Ostend, Belgium).

From 2418 patients with non-variceal bleeding, 41.9% (1012) had PUB; specifically, the cause of bleeding in 49% (496) was gastric ulcer, in 47% (476) duodenal ulcer, in 2.4% (24) both gastric and duodenal ulcer, and in 1.6% (16) gastro-enteric anastomosis ulcer. Endoscopic treatment was required in 58% of patients with ulcer bleeding, and in 57.3% hemostasis was achieved with hemoclips or with combination hemoclips/diluted epinephrine. The rate of rebleeding was 9.4%, and in patients that were on anticoagulant therapy the rebleeding rate was 14.8% (P = 0.245), which was not statistically significant. In total, 5.4% of the patients were transferred to the Department of Surgery. The 30-d mortality was 5.2% and the median length of hospitalization was 6 d. Transfusion of red blood cells was performed in 49% of patients. Patients were predominantly men (median age 65.3). In 52% of patients, high-risk ulcers were verified (Forrest Ia-IIb), 11% of the patients presented with shock, and moderate to severe comorbidity was found in 58%. Furthermore, 28.1% patients with peptic ulcer had been taking nonsteroidal anti-inflammatory drugs, 20% acetylsalicylic acid, 3.1% antiplatelet medication and 6% anticoagulant therapy.

Using ROC curve analysis we found that the GBS was clearly superior to pre-endoscopic RS and pre-endoscopic BBS, in predicting need for hospital-based intervention or 30-d mortality (AUROC 0.84 vs 0.57 vs 0.64 respectively) (Figure 1). 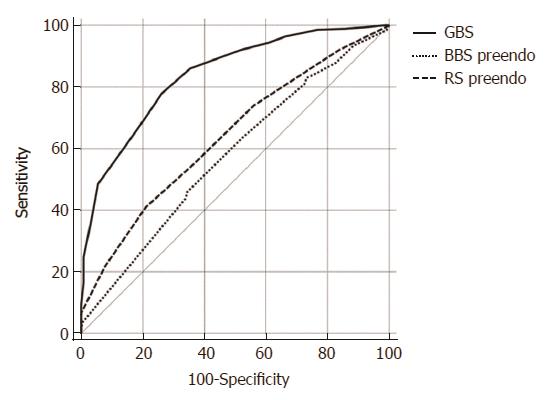 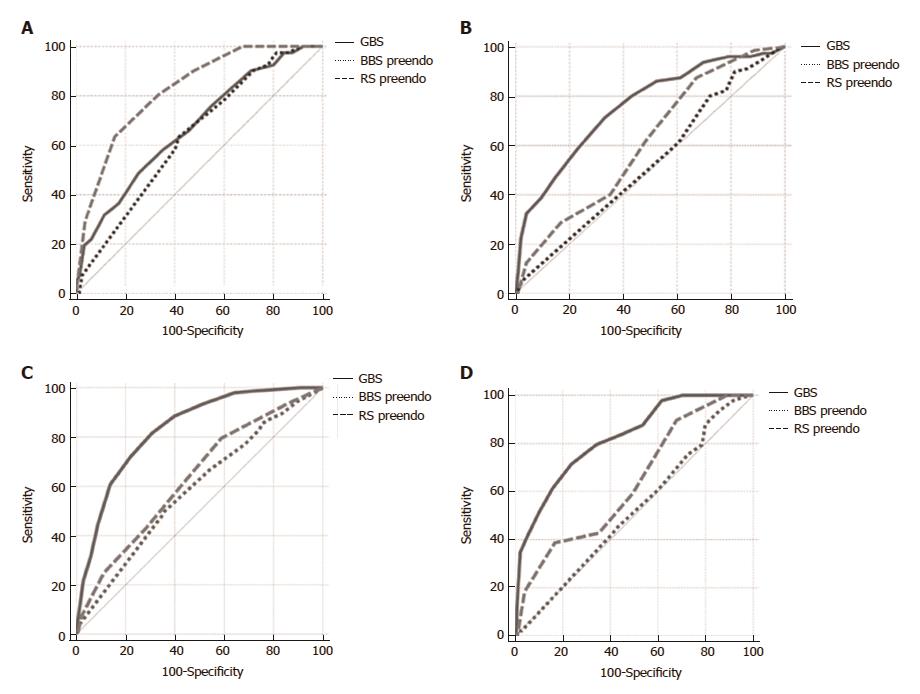 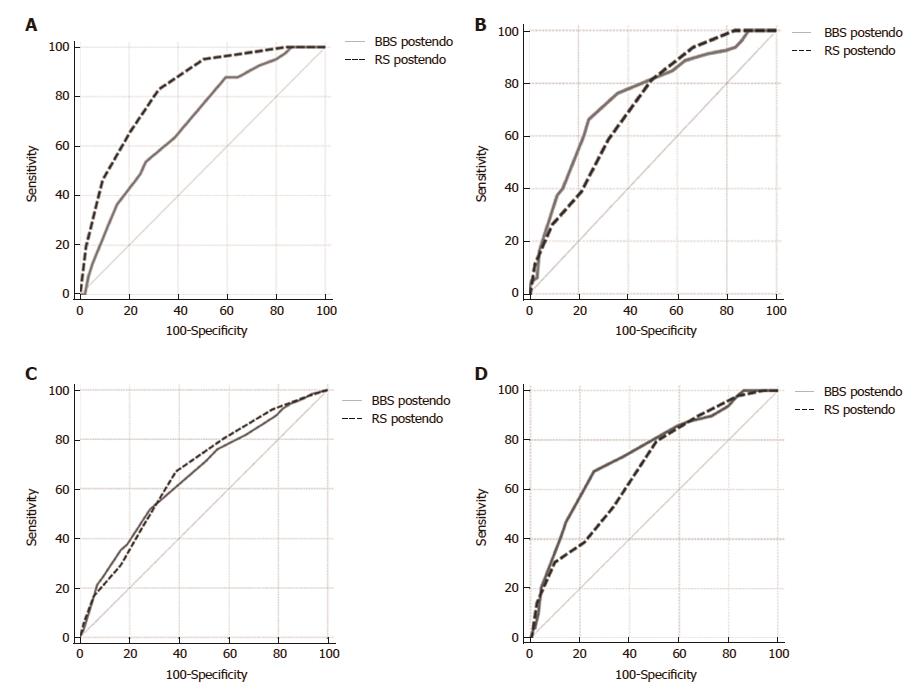 There was no significant difference between the post-endoscopic RS and BBS in the prediction of rebleeding (AUROC 0.70 vs 0.73) (Figure 3B).

UGIB is the most important cause of emergency gastroenterological admissions and the most frequent condition requiring emergency endoscopy[1]. The most common causes of acute UGIB are non-variceal, of which 30% to 60% are attributed to PUB[28]. In our study, 42% of all non-variceal bleeding was caused by PUB. In order to assess the adequate timing of endoscopy and selection of patients for hospital admission, several scoring systems for risk estimation have been developed. With the array of available scoring systems, it is often difficult to select the ideal scoring system for a particular patient or clinical outcome of interest. Therefore, in this study, we compared the performance of these scoring systems in the risk assessment of various clinical outcomes.

Our study showed that there is no significant difference between the post-endoscopic BBS and post-endoscopic RS in predicting peptic ulcer rebleeding. This is in concordance with the results from a study by Laursen et al[6]. Similar data was published by Italian and Dutch researchers, who also found low values under the ROC curve [(0.59-0.68) and 0.61] and concluded that the RS is not appropriate for prediction of rebleeding[16,30].

Our cutoff points for high-risk of rebleeding and lethal outcome in PUB patients are significantly different in comparison with original research papers (GBS ≥ 2, pre-endoscopic BBS > 5, post-endoscopic BBS ≥ 10, post-endoscopic RS ≥ 4), which all refer to UGIB[6-9,13,14]. An explanation for this could be that the original series included an unselected group of patients with UGIB, with a significant proportion of patients with a low-risk of death, recurrent bleeding, and needs for blood transfusion and/or surgical intervention. These were patients that presented with low-risk bleeding ulcers (Forrest IIc and Forrest III), Mallory-Weiss syndrome, ulcerative esophagitis, angiodysplasia and portal hypertensive gastropathy.

When considering possible limitations of our study, there is always a certain level of subjectivity in the endoscopic classification of ulcers and variation in endoscopic treatment. Furthermore, our study had a relatively short follow-up period of 30 d.

This paper delivers a prospective single-center study, with a sample size of more than 1000 patients, that compared the scoring systems of the Glasgow-Blatchford score, Rockall score and Baylor bleeding score in predicting clinical outcomes and need for interventions in patients with bleeding peptic ulcers.

Endoscopic hemostasis represents the cornerstone of upper gastrointestinal bleeding treatment, and several scores have been developed for the prediction of rebleeding.

A detailed description is provided to allow other investigators to reproduce or validate the results. The statistical methods used are appropriate. The results provide sufficient experimental evidence to draw firm scientific conclusions. The discussion is well organized and provides systematic theoretical analysis and valuable conclusions.