To elucidate the role of STAT3 in hepatocarcinogenesis and biliary ductular proliferation following chronic liver injury.

STAT3 may regulate hepatocyte proliferation as well as transdifferentiation into cholangiocytes and serve as a therapeutic target for HCC inhibition and biliary regeneration.

Interleukin (IL)-6 family cytokines are indispensable to liver regeneration. The Janus kinase/signal transducers and activators of transcription (JAK/STAT3) pathway is thought to play the central role in signal transduction mediated by IL-6 family. Several target genes of STAT3 have been identified; these genes include cyclin D, c-myc, bcl-xL, and mcl-1, which are essential for cell proliferation and survival. In murine models of liver injury, ablation of STAT3 in liver results in enhanced liver injury and reduced liver regeneration[1]. These findings suggest the protective and proliferative roles of STAT3 in liver regeneration. In addition, STAT3 has been implicated in cellular differentiation, and its activation is associated with differentiation of T cells and macrophages[2]. Studies have demonstrated that STAT3 is essential for the maintenance of pluripotency of embryonic stem (ES) cells[3,4] and self-renewal of tumor-initiating cells in the liver[5]. However, the differentiative role of STAT3 in liver regeneration is questionable.

Mice were hosted in the cage whose dimension is 218 mm × 320 mm × 133 mm, in which recycled paper bedding and enrichment that stimulates natural instincts were put, and had free access to water and a standard rodent diet during the experimental period. All mice were maintained under specific pathogen-free conditions, and were monitored every other day. We observed any signs of abnormalities (i.e. marked weight loss or behavior change), but no mice became ill or died prior to the experimental end point. All mice experiments were conducted in strict accordance with the NIH Guidelines for the Care and Use of Laboratory Animals and were approved by the University of Kurume Institutional Animal Care and Use Committee. Albumin-Cre (Alb-Cre) mice on a C57/BL6 background expressing Cre recombinase under the control of the mouse albumin gene regulatory region and STAT3flox/flox mice on a C57/BL6 background were prepared previously described[16]. To generate hepatic-STAT3 deficient (STAT3Δhep) mice, Alb-Cre mice were crossed with STAT3 flox/flox mice. 4-6 wk male mice weighing 15-20 g were used in this study. For modelling medium- and long-term Thioacetamide (TAA) responses such as inflammation, cirrhosis, and hepatocellular carcinoma (HCC), individual mice received drinking water with TAA (300 mg/L; Wako) for 16 wk (n = 3 for STAT3Δhep mice, n = 4 for control mice (wild-type mice or STAT3 flox/flox mice) and 30 wk (n = 6 for both STAT3Δhep and control mice) respectively. Mice were sacrificed by an overdose of diethyl ether.

Liver specimens were fixed in 10% buffered formalin and embedded in paraffin. Then, consecutive 4-μm sections were cut and stained with hematoxylin and eosin. Histopathological diagnosis was made according to the General Rules for the Clinical and Pathological Study of Primary Liver Cancer edited by the Liver Cancer Study Group of Japan. For evaluation of fibrosis, Azan staining was performed on paraffin-embedded tissue sections using standard methods. The area of fibrosis was quantified using WinRoof image software (version 6.1, Mitani Corporation, Fukui, Japan) and the results were presented as the ratio of the fibrotic area to the total area of the image. We performed immunohistochemical staining of the paraffin-embedded tissue slices using antibodies against; PCNA (PA5-27214; Thermo Fisher Scientific; dilution 1:100), Keratin19 (KRT19; a gift of Atsushi Miyajima; dilution 1:500), SOX9 (ab71762; Abcam, Cambridge, United Kingdom; dilution 1:500) and YAP (ab39361; Abcam, Cambridge, United Kingdom; dilution 1:100). The slices were soaked with 10mM citrate buffer (pH 6.0) and autoclaved at 121°C for 5 min for antigen retrieval. Nonspecific protein staining was blocked by preincubation with Protein Block Serum-Free (DAKO). The slices were then exposed to each primary antibody or rabbit IgG as a negative control at 4°C overnight. After washing, the sections were incubated with Envision secondary antibody labeled with horseradish peroxidase-polymer complexes (DAKO) and stained with DAB. The cellular nuclei were counterstained with hematoxylin.

Statistical significance was assessed using the Mann-Whitney U-test. P < 0.05 was considered statistically significant. The data were presented as mean ± SE. 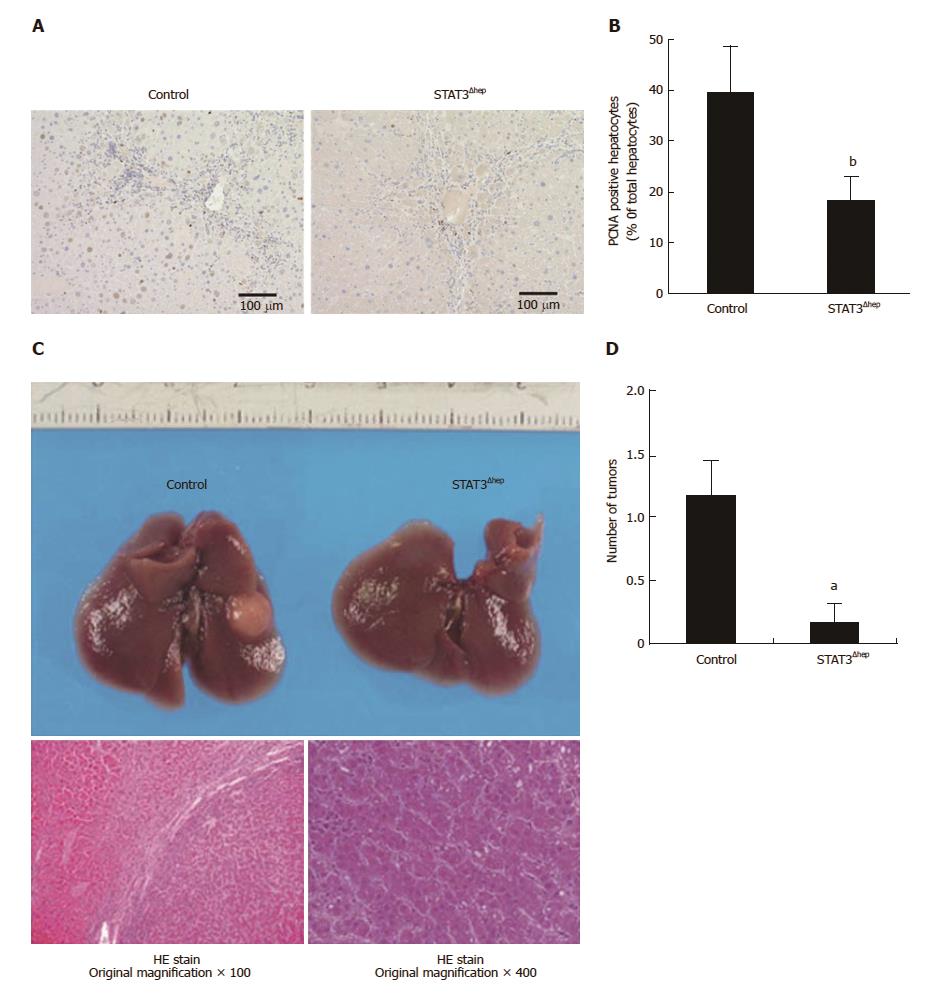 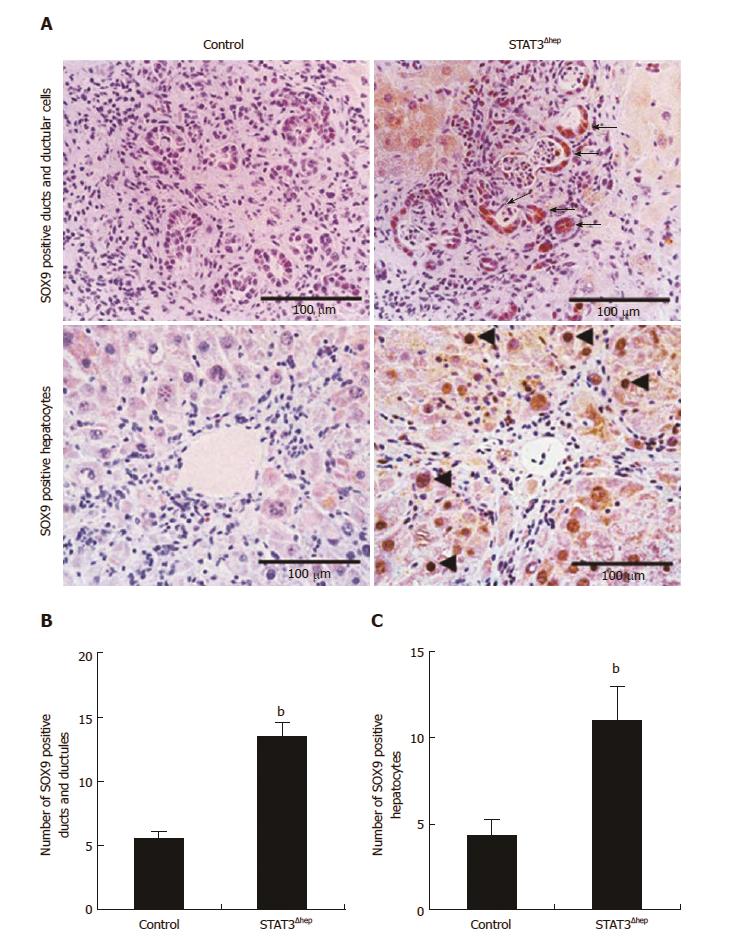 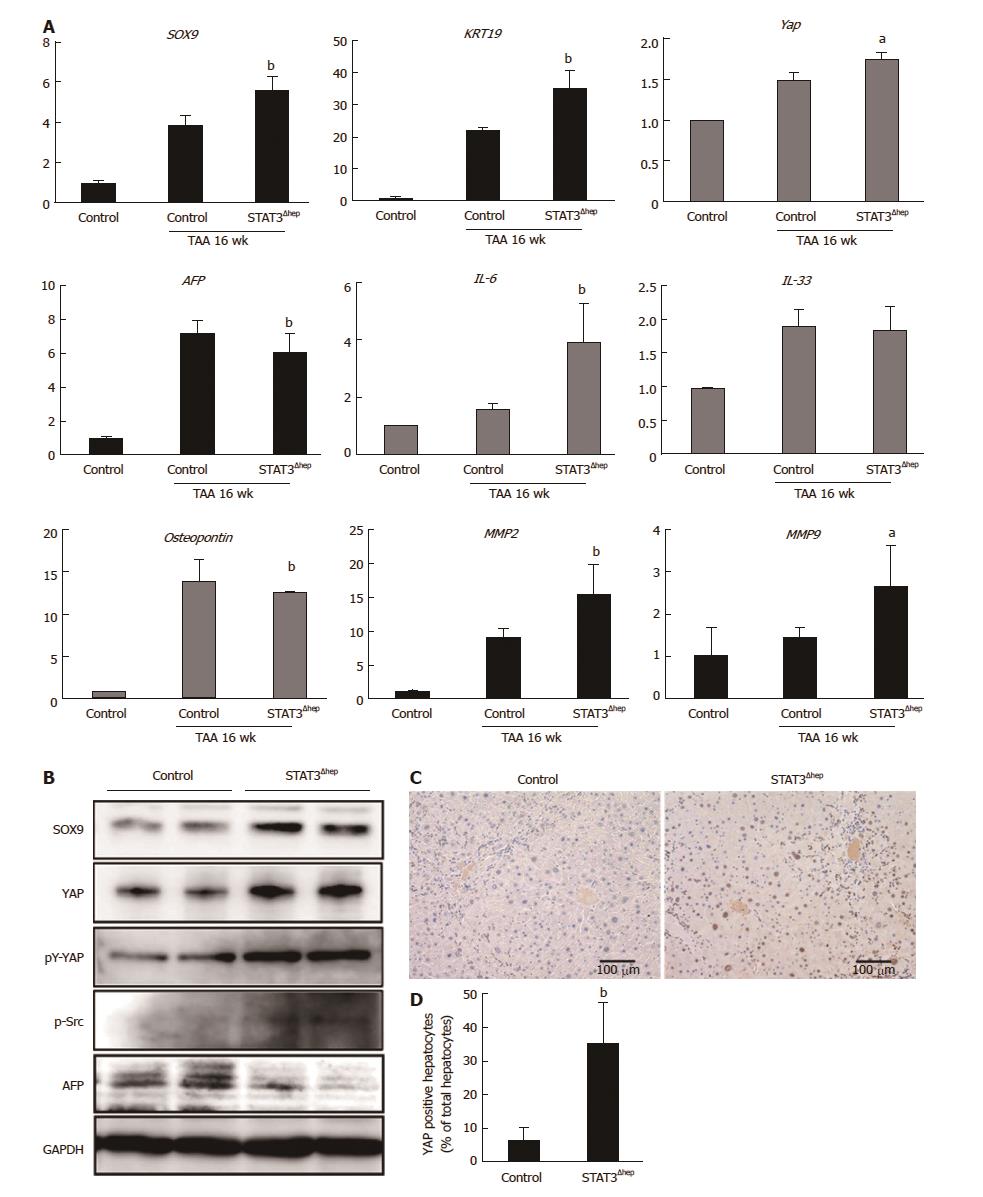 In this study, we show that STAT3-deficient liver displayed reduced HCC development and promoted biliary ductular proliferation during TAA-induced liver injury. STAT3-deficient hepatocytes exhibited YAP activation and upregulation of SOX9 expression, indicating transdifferentiation of hepatocytes into cholangiocytes. This study is the first report that STAT3 is implicated in both proliferation and differentiation of hepatocytes after liver injury.

IL-6 family cytokines are obviously essential for liver repair. IL-6-deficiency impairs liver regeneration and causes liver failure characterized with blunted DNA synthesis in hepatocytes but not in nonparenchymal cells[18]. The role of JAK/STAT3 pathway has been extensively evaluated and thought to be essential for IL-6-mediated liver repair, because STAT3 regulates many of genes associated with cell survival and proliferation. During liver regeneration after partial hepatectomy, hepatocytes-STAT3 activation was observed in periportal area[19], which might harbor putative stem cell nische[20]. Recently, periportal hepatocytes were shown to have extensive proliferative property for liver repair[11]. These reports suggested that STAT3 activation in periportal area was crucial for liver regeneration. Indeed, TAA-induced liver damage was augmented in liver specific STAT3-deficient mice compared to control mice. However, hepatic STAT3 deficiency did not cause lethal liver injury after TAA treatment. Consistently, previous reports showed that hepatic STAT3 deficiency, unlike IL-6 deficiency, caused modest reduction of liver regeneration with no liver failure after partial hepatectomy[1]. These findings suggest that hepatic STAT3 plays a part of IL-6-mediated liver repair property. Because IL-6 family cytokines activate ERK/MAPK and PI3K/Akt pathways as well as JAK/STAT3 pathway through its receptor gp130, these pathways may lead to compensation of proliferation in STAT3-deficient hepatocytes.

Until recently, YAP has been shown to regulate cell proliferation in some organs including liver[21]. By binding to TEAD transcription factor in nucleus, YAP activates expression of multiple genes including CTGF, CCND1 and BCL2L1 responsible for cell proliferation, antiapoptosis and survival. In Hippo/Lats pathway, YAP serine (S127) phosphorylation results in cytoplasmic sequestration and inhibition of its transcriptional coactivator activity[22,23]. In contrast, src-family kinase induced-YAP tyrosine (Y357) phosphorylation leads to its stabilization and nuclear localization, activating its transcriptional property[17]. Recent report revealed that IL-6-mediated YAP tyrosine (Y357) phosphorylation via a gp130-src family kinase module promotes intestinal epithelial proliferation in vivo[24]. Therefore, YAP and STAT3 cooperatively might promote hepatocytes proliferation and survival for IL-6-mediated liver regeneration. Compensatory YAP activation probably due to IL-6 upregulation might restore the property of STAT3-deficient hepatocytes proliferation and survival. Recently IL-22 has also been shown to be critical for liver regeneration[25]. Although IL-22 does not interact gp130, IL-22 receptor bind SHP2 leading to activation of both src family kinase and STAT3[26]. YAP and STAT3 might be involved in not only IL-6-mediated but IL-22-mediated liver regeneration.

Demetris et al[28] previously reported that KRT19 positive/AFP negative hepatocytes, called ductular hepatocytes, appeared to exhibit ductular reaction in submassive liver necrosis. The ductular hepatocytes were thought to contribute to biliary repair through transdifferentiation into cholangiocytes. As AFP synthesis and secretion were derived from differentiated hepatocytes in liver injury, TAA treatment upregulated AFP expression reflecting hepatocytes repopulation. The TAA treatment-induced AFP upregulation was significantly inhibited in hepatic-STAT3 deficient mice, whereas the expression of KRT19 was upregulated compared to control mice. Interestingly, AFP expression is suppressed by YAP in undifferentiated ES cells, and YAP inhibition results in AFP expression with differentiation of ES cell[27]. These findings suggest that YAP activation in STAT3-deficient hepatocytes might direct their transdifferentiation into cholangiocytes instead of their dedifferentiation into progenitor cells. An important question is whether YAP activation in STAT3-deficient hepatocytes contribute to development of liver cancer, as YAP has been found to be involved in cholangiocarcinoma[29]. However, hepatic-STAT3 deficient mice did not cause cholangiocarcinoma, suggesting that STAT3 deficiency-induced YAP activation is insufficient for oncogenic transformation at least in the model of TAA-induced liver injury. Otherwise, hepatic STAT3 depletion promoted fibrotic regeneration in TAA-induced liver injury model. Recent report showed that YAP expression was positively correlated with liver fibrosis in non-alcoholic steatohepatitis[30]. Because YAP has also been found to promote epithelial-mesenchymal transition[31], the possibility is not excluded that YAP activation might promote transdifferentiation of hepatocytes into myofibroblast leading to liver fibrosis.

In conclusion, STAT3 is not only involved in HCC development but also prevents biliary ductular formation in TAA-induced liver injury. Our study highlights hepatic STAT3 as a plausible target for biliary repair during liver injury.

Hepatic STAT3 is a plausible target for biliary repair during liver injury.

YAP, an important effector of Hippo pathway which controls organ size in animals through the regulation of cell proliferation and apoptosis. A recent report revealed that YAP activation in hepatocytes results in their transdifferentiation into cholangiocytes. SOX9, one of transcription factors which is required for the normal differentiation of the biliary tract. It was recently reported that SOX9-positive periportal hepatocytes transdifferentiate into cholangiocytes and that SOX9 expression is upregulated by YAP activation. Transdifferentiation, a process in which one mature somatic cell converts into another mature somatic cell without going through an intermediate pluripotent or progenitor cell type.

The authors provided evidence showing that STAT3 may mediate carcinogen-induced hepatocellular carcinoma in mouse model. Hepatocyte-specific deletion of STAT3 reduced compensatory proliferation and cancer formation in response to TAA. Additional test indicated that deficiency of STAT3 enhanced YAP activation and SOX9 expression, which may contribute to the enhanced formation of biliary ductular structures. The manuscript was well-written and the results are straightforward.